I would like to draw a sketchy frizzled border around the panels of a comic page in Photoshop. Basically a brush stroke border with a precise alignment to the borders of the rounded rectangle.

Idealistic I'd just want to use the rounded rectangle tool with a border that looks like drawn by a brush.

Another idea was to make the border a clipping mask and use a brush for that. But the brush stroke would need to aline with the panel borders since they have round edges. I haven't found a way to do that since I'll always have the underlying color of the clipping mask beneath the border instead of the background from the texture below.

There is also the stroke option of the layer menu, but I didn't find an option to change the stroke appearance in the way I'd need it.

Other tutorials suggest using the eraser tool to give the border a grunge effect. I guess that would technically work but for the thin lines and the number of panels this would take forever.

Are there any other hidden tricks in Photoshop to achieve that goal?

This example was made easily in Apple's Pages.

If you have acces to Illustrator you can cut and paste from there as well layer masks as the needed borders with customized strokes. The following screenshot shows a few preset artistic strokes.

One can easily make an own stroke pattern as a straight line. Then it's available for arbitary curves. Even scanned real strokes can be used after tracing them to vector.

Copying and pasting from illustrator can be in any size without quality loss due shrinking or enlargening.

Inkscape (=freeware) can also be used for this, but it needs more steps because cut in Inkscape doesn't get pasted in Photoshop, one must export. But copy in Photoshop pastes in Inkscape easily.

Something similar can be achieved entirely within Photoshop.

Create a rounded rectangle and add a stroke effect, and choose a pattern fill. Although this will only work for small stroke sizes of around 2px.

Here's another where I also added an inner glow with noise to roughen up the inside line, in combination with the other two effects. The beauty of this method is that the effects are live and move when you rescale or change the size of the shape. 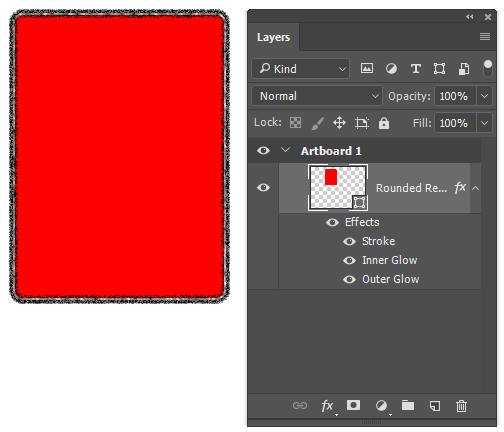 As an addition, I just discovered that there is also a similar looking shape in the collection of the custom shape tool. 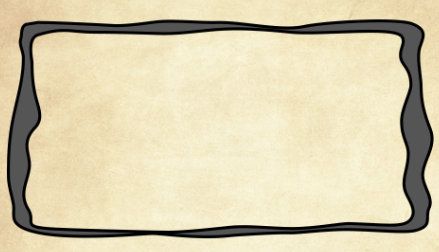 Not the answer you're looking for? Browse other questions tagged adobe-photoshop borders clipping-mask comics or ask your own question.

4
3D objects with raised border in illustrator
2
How to make a multiplied layer become "what you see is what you get"?
5
How to create a triangle/jagged edges on a single border in Adobe Illustrator CS6?
5
Best way (efficient and nice output) and best software to ink comics digitally
3
Illustrator clipping mask problem
5
How do I prevent a clipping mask from hiding layer effects?
2
How to trim a bunch of open curves with a closed shape in Adobe Illustrator?
3
Quick method for adding bleed to masked images?
0
Use clipping mask to fill transparent shape in photoshop
0
Draw a rectangle with semi-transparent border