How to render text as brush stroke?

Is this possible to render a text as a certain brush stroke, so that the text seem to look like painted with a brush? Not looking for any generic paintbrush-effect or fonts. It has to be a brush from the already installed photoshop or gimp brushes. I'm working with Non-Latin Characters. I want to flow a brush stroke along the path of the text, so that it looks like the text was written with that brushstroke.

One obvious option is to write the text with the desired brush with an extremely steady hand. But what if we could render the text as brush stroke?

Fonts are typically defined by the collection of curves that make up their outline, so there's no perfect single curve there to stroke with a brush.

Long answer: Maybe, if you're willing to put in quite a lot of work, and it's probably still going to look a bit off.

Your best bet here is to find a particularly light font (I'm using InkScape and Segoe Script for this example), outline it by selecting Path > Object to Path or entering Shift + Ctrl + C with the text selected; 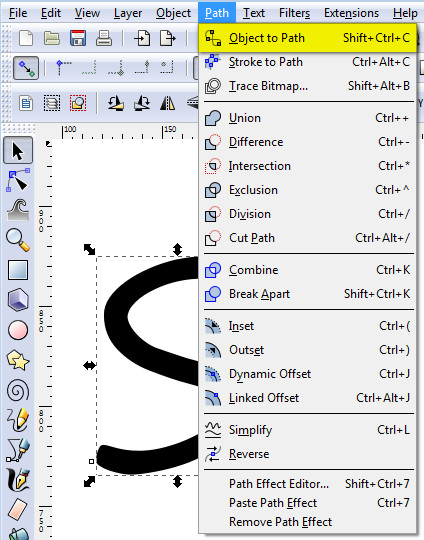 Then split the outline using the edit paths tool selecting two points near where you'd imagine the start and end of the stroke you'd like would be, and press break path at selected nodes on the bottom toolbar, and Path > Break Apart (Shift + Ctrl + K), and finally Ungroup the resulting curves with Object > Ungroup (Shift + Ctrl + G); 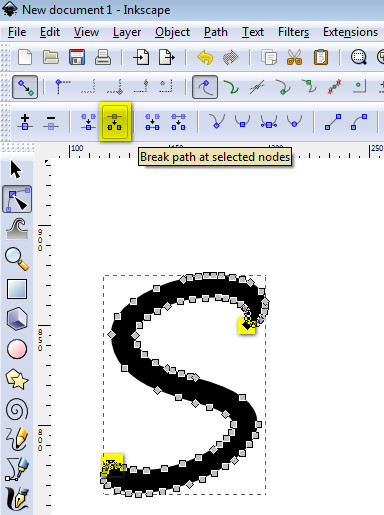 Now that you've broken the letter down, you should be left with a curve (or several) which may or may not vaguely resemble your desired output (very few letters will be as easy as this one has been). I've been left with these two; 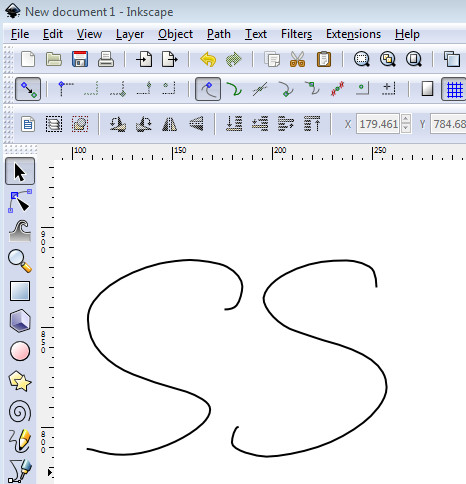 At this point if you were using Photoshop or Illustrator you could stroke whichever curve you prefer with a brush that you like, and be ready to dissect the next letter on your list, but since I'm stuck using Inkscape there aren't really any brushes to use here, so I'd set the stroke thickness and endcaps I like and call it a day.

Apparently you can import curves into GIMP by right clicking in the Paths Palette clicking Import Path and selecting an .svg. Now you can pull your dissected curves over from Inkscape and stroke them with whichever brush you'd like.

You merely need paths for the text, then apply whatever brush you want by selecting the paths, and clicking the brush in the Brushes Panel:

This question may be helpful if you want to type text and then convert it to a single path: How to convert text to single stroke in illustrator

And Adobe has some resources if you are unfamiliar with creating brushes: https://helpx.adobe.com/illustrator/using/brushes.html

What about using a brush font like Dry Brush and there are many other similar ones, free or paid. 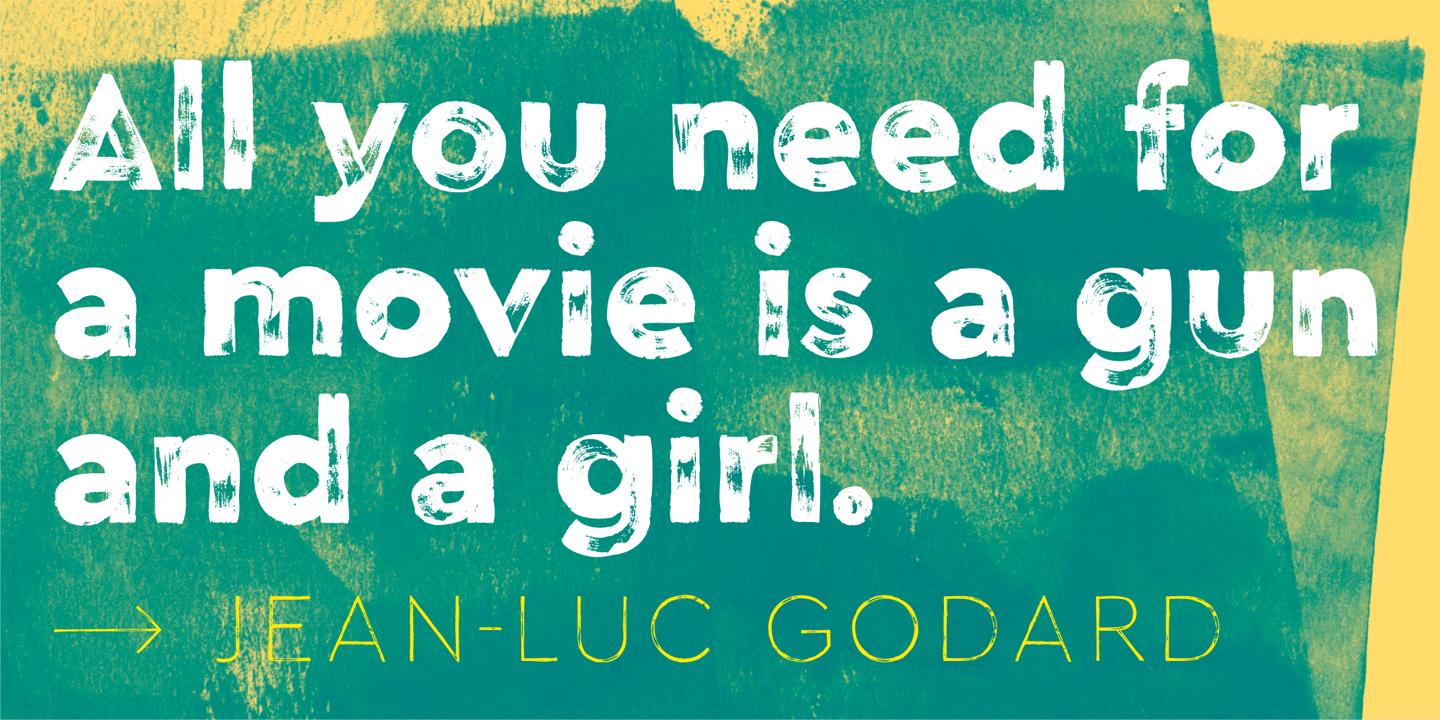 High quality results need painting by hand. That's slow and difficult, but something a little resembling can be achieved by crafting manually normal text to a less perfect shape. A quite simple font must be used to keep the job easy. An example(Photoshop): 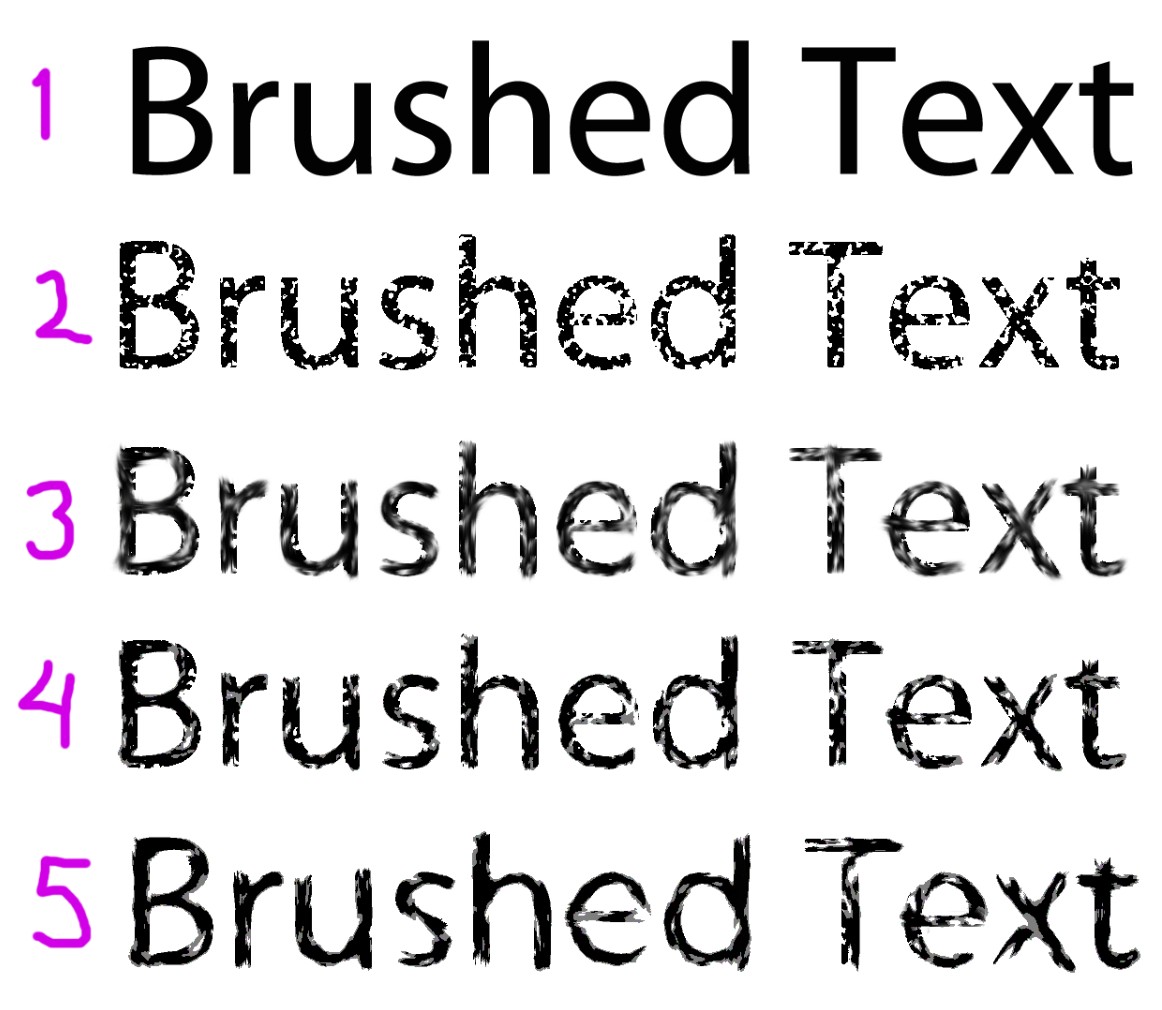 Why the posterization? It makes white color exact. White areas are easy to select and delete. Generally the result becomes also sharper.

The detoriated text itself (after inverting) can be used as a layer mask for the final color. An example:

In Illustrator one can find the skeleton of the text an replace in it the normal solid strokes with a pattern or artistic brush. That brush obviously must be made for this purpose. Making a custom brush from scratch or from a scanned real brush stroke is another story. We use only presets here.

This subjent is presented in another answer. I admit all what is told there, but I still tried it. See the cartoon: 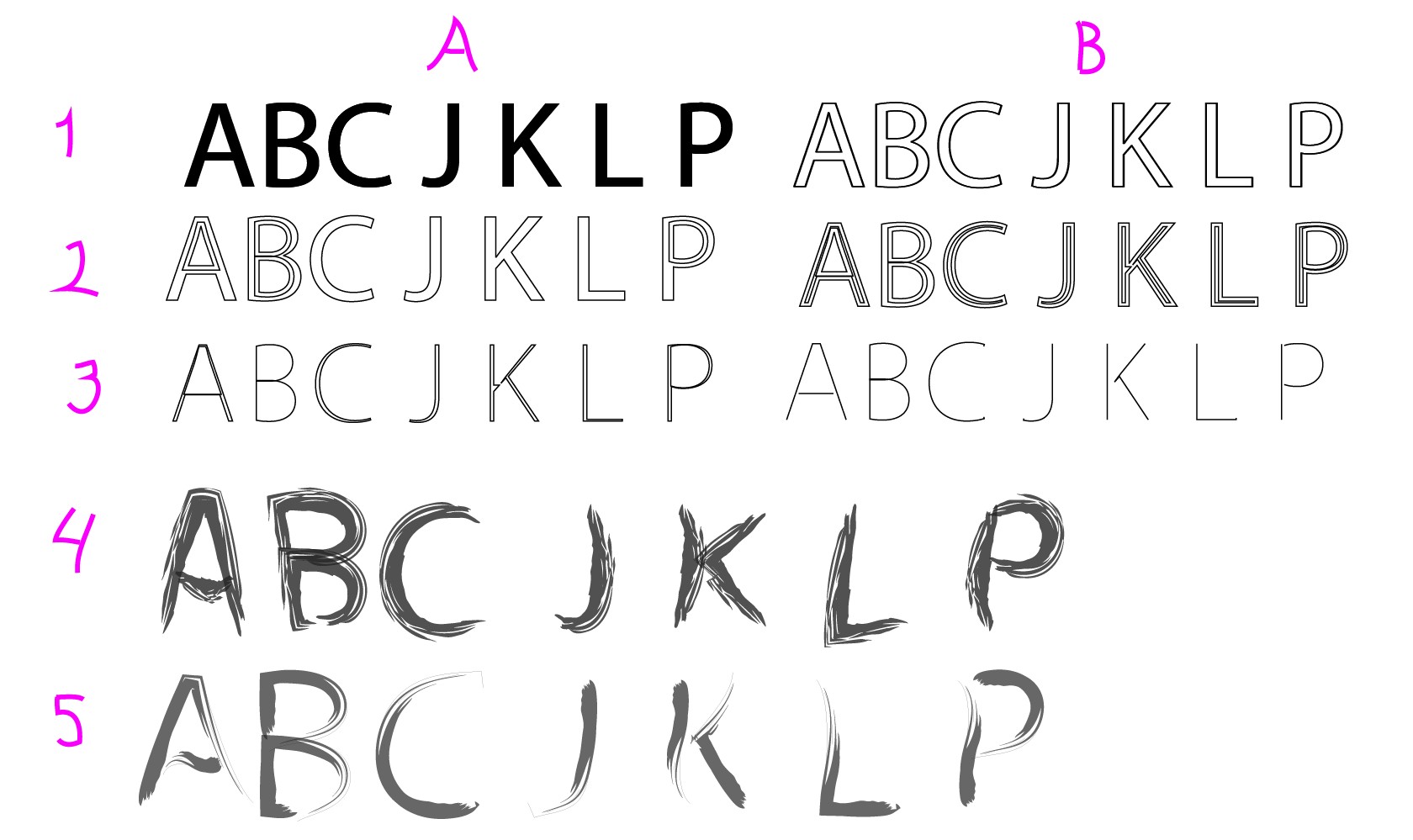 1A. The original text

1B. Outlined, given a thin stroke, no fill, groups and compound paths are all released. All characters were inspected individually after founding that single selection was not enough.

2A. Inner loops have got positive offset strokes

2B. Outer loops have got necative offset strokes

3A. All unnecessary which were selectable with the normal selection tool, are removed

3B. More unnecessary is deleted with the direct selection tool. The vertical stroke of K was edited to one piece.

4 and 5: Two different brushes are tried. B had two parts which needed manual alignment because the strokes are not uniforml.

I found the result is substantially better than what I got simply painting with the mouse over a piece of text. I'm sure that it could be much better, if the brush were custom made and there were 2 of them for different directions.

Another method in Illustrator is to rasterize the writing and trace the result. After expanding the trace a brush can be applied.

Illustrator's Live Trace has an option to trace the strokes. If one allows thick enough stroke, he really gets the skeleton, but it has many extra twists, as the following screenshot shows. The twists can render the method useless for complex Asian writings, if the user cannot rectify the shapes with the direct selection tool.

At its best this method gives quite same as manually digging out the skeleton and applying a proper brush. But it's easier even if some manual tunings are needed.

One can wonder why I offer methods this complex? Why I do not simply take the pen tool and manually draw the skeleton - a few clicks per character? Answer: Oriental fonts are not simple. Knowing it I tried to find some shortcuts. Tracing rasterized text as strokes and applying a brush is obviously the nearest, but its quality is very questionable without manual path editing.

Single line or engraving fonts? There are some that do not get thicker in any zoom. If you have one, you need only write your text, outline, adjust the size and apply a brush in Illustrator. Done. Unfortunately I have not a well implemented such font to show an example, but I found a link of the subject:

Such fonts are often good only in some special software, they do not obey all windows conventions. The result is distorted or partially invisible rendering in Illustrator. I tried CamBam Stick fonts (freeware). Illustrator left with them some lines invisible. The rest of the characters worked perfectly.

Start a new document, write the text with what you want it to say.

Select it and go to the menu Type > Create Work Path

Create a new layer and turn off visibility for the text layer (the outline should stay visible.)

Select the new layer and goto Paths. (It's in your layer window as a tab.)

Choose the brush you want to use and then click "Brush With Stroke. It's the hollow circle in the bottom of the Paths window.

Not the answer you're looking for? Browse other questions tagged adobe-photoshop adobe-illustrator inkscape gimp or ask your own question.

19
“Wire” (one dimensional) font
9
How to convert text to single stroke in illustrator
-1
Can someone tell me what this font is?

0
How to overwrite brush “texture” with single color in Illustrator CS6?
7
How to write text from right-to-left in Central Asian Languages group fonts
0
illustrator cut text from a shape with a brush
2
Chinese Calligraphy in Photoshop
4
Alternative Font Family for text in SVG-file
0
Illustrator stroke preview for pencil while drawing like paintbrush
1
How does one make a brush smoother in Photoshop?
0
How Does One Recreate Paint Brushes and Other Drawing Tools in Photoshop Accurately?
0
Adobe suite: Distort PNG by adding “curve”?