I'm fairly new to Illustrator, but I'm learning fast. Right now I'm just practicing vectorizing images and removing their backgrounds. My current project is working with the picture of a bulldog. I've successfully live traced the picture and converted it to grayscale, but now I need to remove the background.

I need a way to cut that object, along where I know the dog's outline is. I've been using the knife tool with limited success: I can create a cut through the object, but I can't specify exactly where I want the cut to go, start, or end. I usually have to cut over into the neighboring object just to make sure the object I am cutting is cut all the way through.

What would be really useful is a way to cut between anchor points. The anchor points are often perfectly positioned to cut along them, but the knife tool seems incapable of cutting from one anchor point to another.

How can I cut an object from one anchor point to another?

Obviously if there's a better way to do this that I don't know about, please let me know. 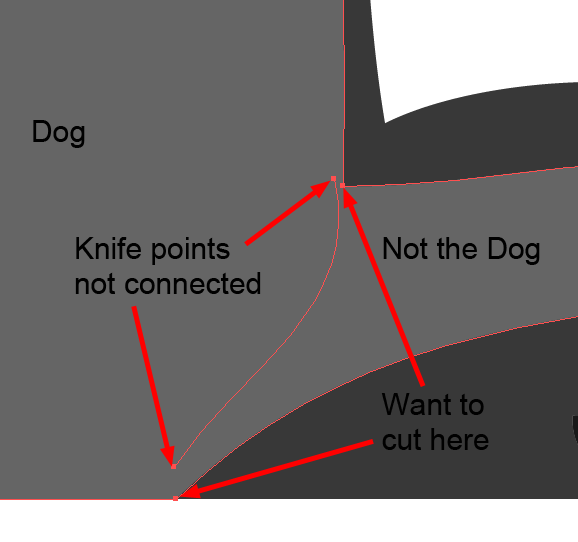 To be blunt.... the Knife Tool sucks, always has.

Draw a path.. a standard path where you want to cut.

Select the path and the underlying shape... and click the Divide Button on the Pathfinder Panel.

Alternative to using knife or pathfinder is to use the scissors tool (hit c). Which unlike the knife tool does not rely on your steady hand (and thus is not useless) and unlike pathfinder does not require a extra path.

So select the path you intend to cut, activate scissors tool. And move your mouse over the anchor and once smart guides say anchor click. The path is now split at exactly that point.

Another trick is to select the subpath you want with direct selection tool, then copy (ctrl/mac+c) and paste in front (ctrl/mac+f, yes do not use ctrl/mac+v). This does much of the same thing if you cut out a entire section.

Not the answer you're looking for? Browse other questions tagged adobe-illustrator vector slices or ask your own question.