Complex Wireframe to solid for use in Autodesk 2018

I'm working on a project for a piece of coursework with which I really need a hand. I can't figure this out and have tried looking at multiple google searches and community posts which all seem to be out of date...

This help request is explained in detail in parts 2, 3 & 4. If you do not want to view the images, files or additional information, please skip all other sections.

1. Quick background about the project

For uni, I have to create a stage design for a festival. The idea behind the design is a Mountain troll leaning on some buildings with LED veins which change colour, lava falling from the mouth and down the sides of the buildings it is leaning on.

I attempted to design the main feature, the head, in Autodesk originally, however I could not get it to look how I wanted it. I decided to move to a more modelling based program, Zbrush 4R7, which makes a great model (head.obj in the files section). It looked exactly how I wanted it.

I attempted to export this file to use within Autodesk inventor, and I could not get anything to convert it into a solid shape. The closest I got was a wire mesh shape which claimed to be converted, however, it wasn't possible to interact with and modify.

3. What I have tried

I have attempted the following

I need the file to be converted into a solid so that I can manipulate it within Autodesk software to use within my design.

I have a huge range of software installed on my pc which I can abuse, if you know a way using any of the following, I would appreciate knowing it. However, I do not have the budget to purchase any products to complete this task.

To save both you and me time, I have uploaded all files to my web host, so that you can view and attempt things. Hopefully this will speed up the process, or at least you will be able to yell at me angrily for doing something stupid in the file...

If you are awesome enough to know the answer to the problem above, a little tip on how to then convert to threejs would be SOOO appreciated! A link to the best guide or something as simple as that would be a perfect Christmas present xD

Thanks for spending time reading this.

Edited by Rafael. Here is a quick render: 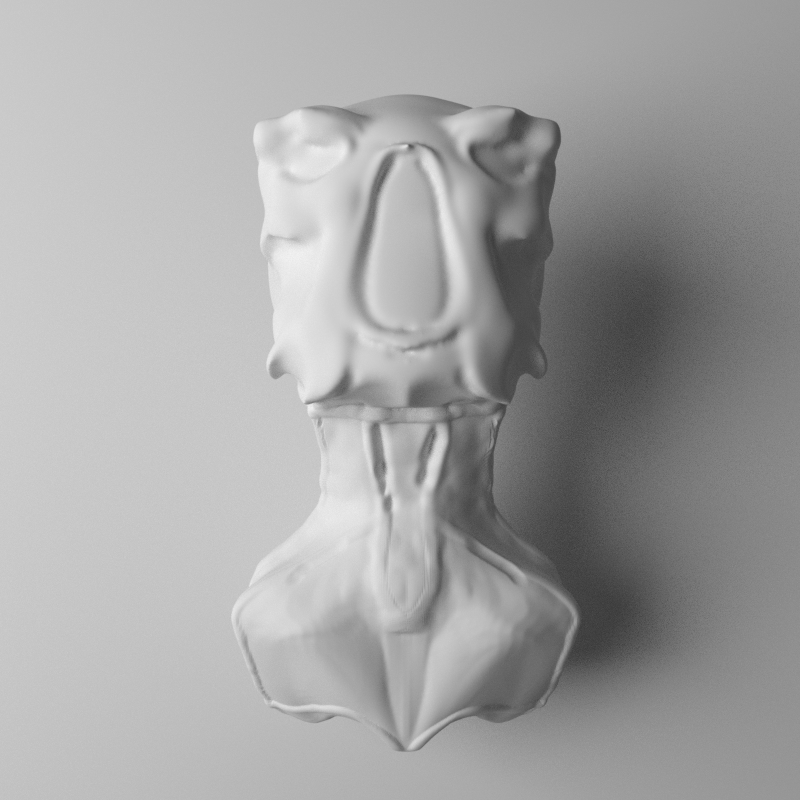 I'm a bit of a fan for using Meshmixer and the tasks ahead of you are not particularly demanding, based on a rather important aspect of the model head. It's not unusual for a sculpting program to create extremely high detail, which results in a high facet/triangle/apex count. This is likely the reason that my Fusion 360 crashed on first attempt, followed simultaneously by Meshmixer. I rebooted and loaded the STL file or the OBJ file, can't recall which into Meshmixer from a clean start. You too can perform this amazing feat.

Open Meshmixer, import the model of choice. I suggest the STL file, as it appears to be the most stable.

Note the triangle count in the lower right corner after importing the file. Please also note that patience is foremost with your model, as the high facet count means much thinking to be done.

Select Edit, Reduce and click on the 50% field, on the digits. I suggest starting with a 75% reduction. It will do very little damage to the fidelity of the model. Click the Accept button to make somewhat-permanent the change.

Export the model as you like, perhaps using a new filename to represent the updated version and saving the original from destruction.

If you are comfortable with Fusion 360, it will Insert, Mesh the reduced model with no complications, although it may caution you that there is a high triangle count. My earlier attempts that did not crash resulted in outright rejection due to high triangle count.

If you wish to interact within Fusion 360, it is necessary to turn off the capture of the design history, then use the Convert to BREP option, making the model "conform" to F360 expectations, so to speak. The actions within F360 will also be slow, again due to high triangle count.

You may find that you can use the reduced triangle model in other programs with less difficulty.

While I had the head model in Meshmixer, reduced, I also exported it in OBJ format, just in case. Reading the last section of your question, I found an online resource for threejs that might be of value to you.

I was able to import the OBJ file and rotate, translate, etc with the model on the screen. I'm not qualified to test further this particular resource, but it may assist you in your quest.

I suspect the Fusion 360 portion to be of small value if your final goal is threejs and you can likely skip that portion.

4
Which software to use for easy 3D shapes?
2
Designing a laser cut cube
1
What feature of Autodesk Inventor is used to bring in a vector image and use it as part of your part?
0
Sketchup How To Create Two Rectangles and Stack Them on Each Other Without Being Sticky and Distorting and Locking Together?
0
UX Wireframe User Flow Scale
1
Designing a custom font for WebGL
3
How to wrap a label to scale around a cylinder using photoshop 3D tools
1
Photoshop - Creating a prefab 3d rectangle for use in 2.5d game development