I am tasked with taking a normal picture and tracing the geometric design in Adobe Illustrator and saving as an SVG. I have traced simple shapes and saved as SVG before, but this particular image really has me scratching my head. I will attach a small version here for reference: 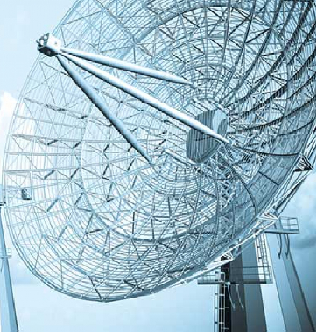 What I have tried

I have since went forward with the custom brush pattern approach. It got me surprisingly close as you will see below. I drew a circle and chose the custom brush, then I used Effect>>Distort>>Distort and Transform to make 6 concentric circles (there are 6 circles in the original picture, if I'm not mistaken). I scaled them at 92% which resulted in a nice transition of 1 circle to the next smaller circle, however it left me with a lot of empty space in the middle. I'm not sure how to get the scaling right; perhaps I need to make my custom brush thicker? My custom brush is provided to the right of the satellite mock-up. 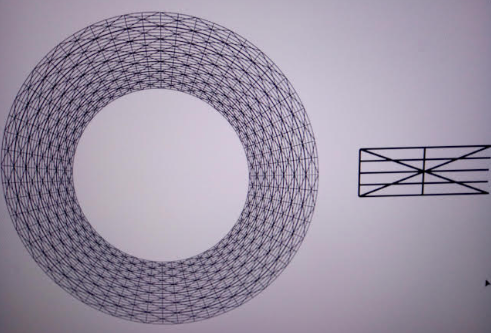 Even after I get the scaling/copying just right, the issue of the 3/4 perspective is unresolved.

I will leave my original question here so as not to invalidate any existing answers.

Question: Is there a fairly time-efficient technique that Adobe Illustrator can bring to bear for a task like this? Any help big or small will be appreciated, thank you.

Optional Question: Is my custom brush technique going to pan out? I'm still stuck at the scaling and how to rotate the perspective to match the original picture. I would appreciate any specific tips with regards to those problems.

The circular reflector of the antenna is possible to draw as 3D model.

Obviously a plausible look-alike version is ok, you do not need radiotechnically accurate copy(= sub-millimeter tolerances regardless the huge size). A 3D modeller who has climbed at least a little upwards from a full novice level draws it in 2 hours, an experienced modeller needs 50% less.

There are plenty of free and commercial 3D models available. Search for them. Some keywords: parabolic,antenna, reflector, radar, radio telescope

ADD: In Illustrator the wanted projection needs 3D or an incredibly tedious envelope mesh distortion warping as a full 2D solution. If the pattern can be flat, but parabolic on a 3D parabolic surface, you can use illustrator's 3D effect Revolve + texture symbol mapping.

You can drag your wireframe to symbols panel and take it from there as mapped artwork onto the revolved dish.

Here's an ultrasimple attempt to do it: 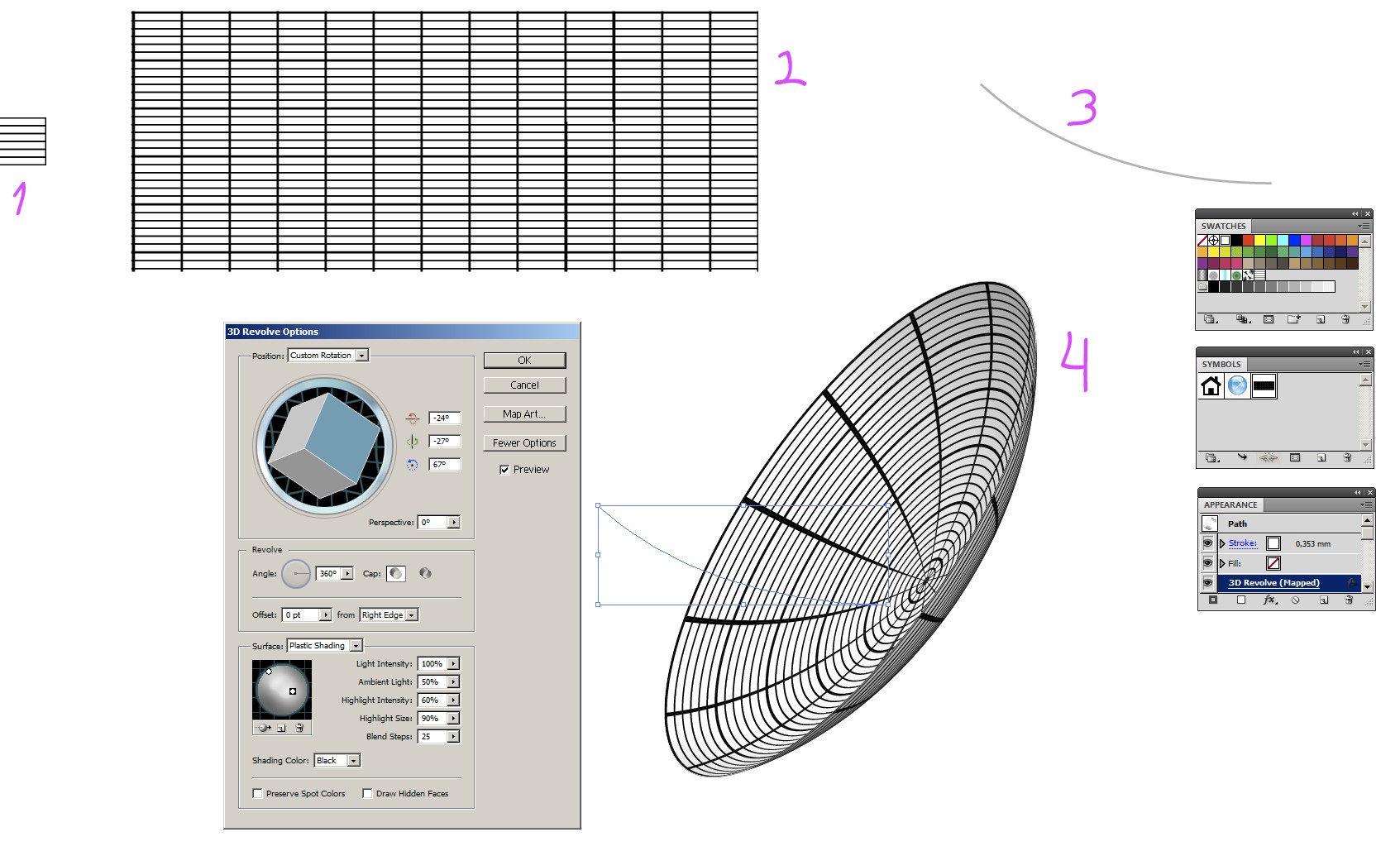 This reflector is not especially plausible because it has no truss structure, which is essential part of the construction. Creating it with Illustrator's 3D is hopeless - there's no such tools included. Even simple freeware CAD can offer more. The next image is an example. It's about 50% less dense than a real thing, measures are random and all parts are only wires, but at least it has thickness and surely it's available as vector SVG: 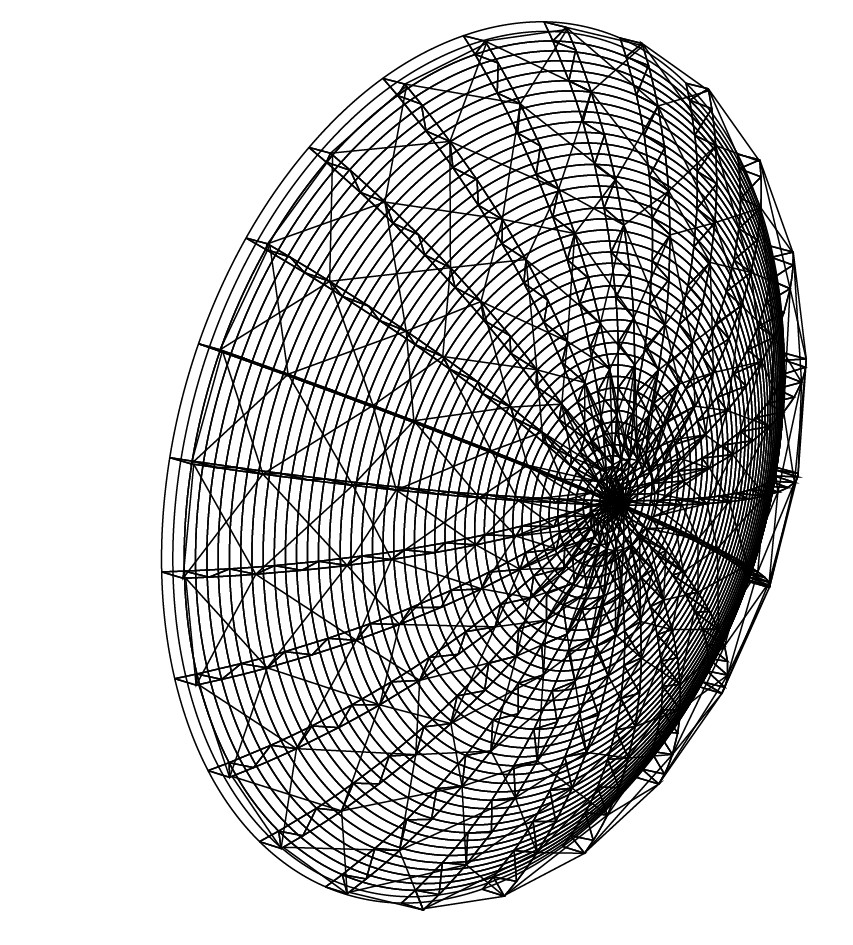 As a construction it's not complex. Only a 15 degrees sector was put together and 23 copies were made. Used CAD = DesignSpark Mechanical.

ADD2: Your radio telescope seems to be available in a marketplace for 3D models https://www.cgtrader.com/3d-models/exterior/sci-fi/radio-telescope Its primary format seems to be a huge polygon mesh. Before purchasing it you should ask the seller how it is convertible to line art vector drawing - you surely do not want all those 100000 triangles, only the visible outlines. The marketplace offers free conversion to other formats, but that's not automatic, the availability must be asked.