How do I create a font that automatically uses accents and removes duplicate letters?

I am working on a special font that has to follow some rules:

There are no real limitations on what I can use to make the fonts. Is this possible to simply create a TTF or OTF file with these rules? If so, how do I do this? If it is not possible, are there any workarounds I could do with the font files?

Please keep your answers to simple English as I am new to this sort of thing.

I don't know which software you are using, but I recommend you read the FontLab Studio 5 manual. I am going to give you a quick answer on how to do both tasks you mention in FontLab Studio 5. 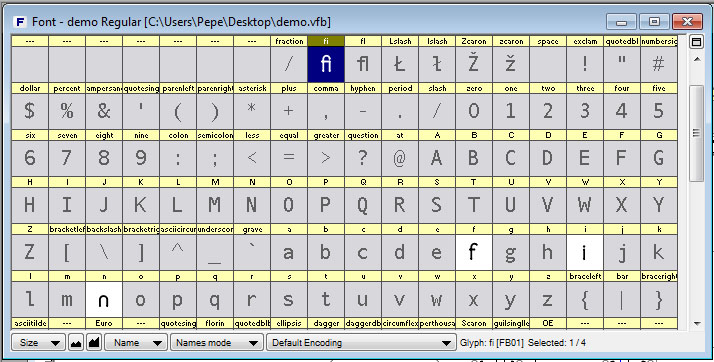 These are the glyphs in the preview panel: 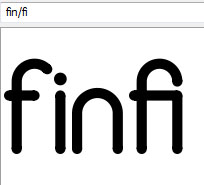 the next panel appears, where you can enter you OpenType Layout Features: 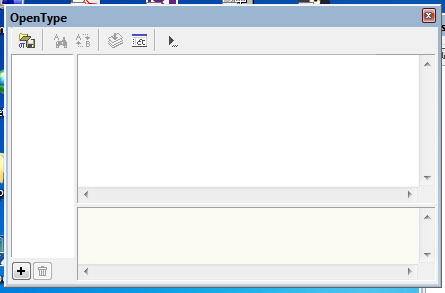 The left side is the list of features, the upper right is where you define the features and the bottom right is where the global definition data goes. In the globals, let's add the following two lines:

Citing this site (which I recommend you to visit!):

[The first line] will register all rules for a fallback system in case an OpenType layout engine gets confused about which language or script your features apply to. Additionally, before you register a script with a specific language, you should register it with the default language for the same reason.

Now, clicking the [+] button in the bottom left part of the panel, you add an unnamed feature:

Ignoring for the moment the languages, scripts, and for the sake of clarity, lets rewrite the feature like this:

Both lines are self-explanatory, and tell the OT Layout Engine to substitute a pair of glyphs for the one following the by. Of course, the removal of repeated characters is nonsense, but I suppose is for demonstration, and is thus included in the liga feature. Also, you have to know about lookups and can use classes. If you open the Preview panel and activate the liga feature, you get: 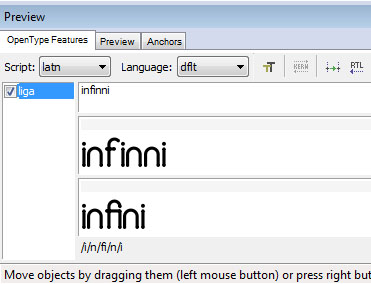 BTW, all that writing can be entered as a separate feature file.

Disclaimer: I'm new at this, and I hope my dear professional typographer friends won't kill me if I omitted something or wrote something wrong. Instead, I invite you to contribute. :)

Not the answer you're looking for? Browse other questions tagged fonts font-design ligatures or ask your own question.

3
Validation issues – duplicate unicode code points?
7
How to correctly choose protrusion for letters and hanging punctuation?
7
A font with custom ligatures (for music)?
1
Automatically create bold-italic from italic font
0
How to Create Compound Characters Inside a Font
4
All superscript (and subscript) font
0
If there are any square-grid Latin fonts