I have this graph below, which shows a readout for an experiment on a graph background like this;

I would like to remove this graph background, leaving just the black line, so that it is formatted like this;

I tried to do this in powerpoint using the 'remove background' option, thinking that powerpoint would be able to distinguish the black line from the red and white background, but no. I have fumbled about with different options in inkscape and imagej, but am not really sure what to do. I don't have access to adobe softwares, so if answers could apply to inkscape/imagej, that would be greatly appreciated.

These are obviously plots on paper. If you can rescan them or take new photos in good light, that really would pay off. Poor contrast and non-uniform light makes all quite tiresome. Uniformly lighted high contrast images are easily traced in Inkscape but these will provide garbage. Two workarounds are already shown:

I suggest doing the job in a photo editor (Photoshop, GIMP) as a way out having only that one image:

This can already be useful, but let's make it closer to the ideal (=black curve on white background). Tresholding cannot be applied because the brightness is too different in left and right. It must be balanced, add brightness to the darker areas. This can be done in several ways:

Let's try the first version. Have a gradient from black (left) to 50% grey (right) in a new layer that has blending mode =Add:

That needs a little fine-tuning. Spray to the gradient a little black with large smooth low opacity brush to take back the overwhitened top right corner.The unwhitening is done most easily after the next step:

Add a levels layer to lift light grey to white and pushing the dark grey down to black:

There are still a couple pieces of garbage, but they are far from the curve. Use eraser to fix them.

Finally, if it's wanted, it can be traced in Inkscape. Single treshold BW won't be ok, because there are greyshades => Tracing mode should be greyscale with at least 4 levels.

I didn't initially notice the inkscape tag, though I'm sure it has similar (if not same) tools and it could work.

I would use Photoshop and adjust the levels.

Now doing this will leave some color there.

Now use some manual touch up (brush work or eraser) to get this:

Looks like Inkscape has a pen tool similar to Illustrator's.

Place your image in Inkscape and lock it down (if you can). Then take the pen tool and "trace" the image. Do this by clicking each point to form the shape on the graph paper.

This might take you a bit to get done, but the result should be what you're looking for.

It's certainly possible in Inkscape. However the main problem is that the original image is darker at one side than the other.

If you trace the bitmap image using Path > Trace Bitmap, choose the Brightness Cut Off option, you can alter the Threshold. But I had to create two copies using different Thresholds to get an acceptable trace of each side.

Then it's a simple case of using a clipping mask made from a rectangle to create two acceptable halves, which can then be put together. 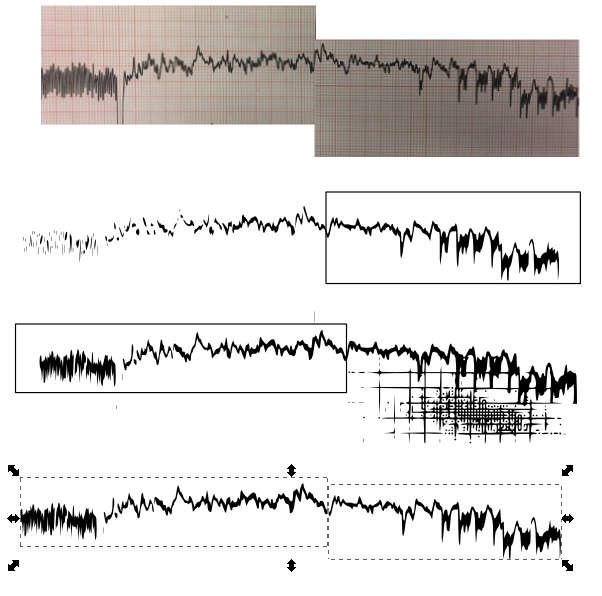 Not the answer you're looking for? Browse other questions tagged inkscape images background background-removal image-editing or ask your own question.

2
Ronchi Rules or graduated and varied strokes in illustrator or Inkscape
0
Inkscape or Illustrator for this kind of work?
1
Remove vertical and horizontal lines
8
Automatically select a foreground color based on a background color
3
Remove Background in Inkscape
2
Software to create perspective line with curves
0
How can I (using Gimp) accurately remove a red background from an image?
2
Inkscape: cutting / trimming inner line
0
Vintage photos and inkscape: removing “yellow” background
0
How to remove SVG background when the background colour is a mask