My problem is a bit complex, so this I'm going to break it into some topics: 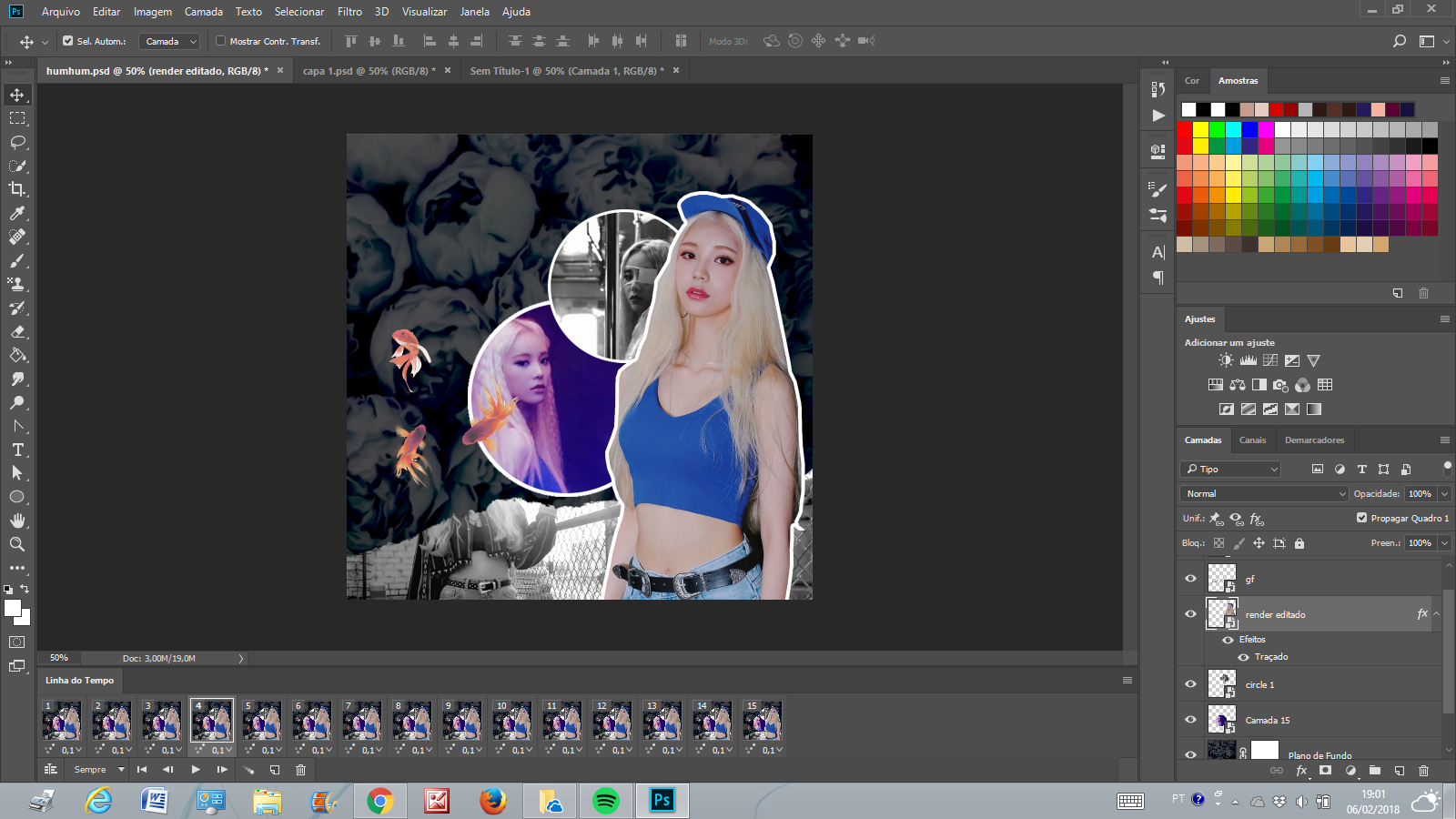 My project: The project consists in a static background overlayed by some imagery elements and a gif (the blue/purple circle is a gif).

The problem: However, I'm having problems editing the overlaying images (the girl's render, for example). Whenever I try to edit any element aside from the gif - adding a shadow to the render on f(x) for instance, which is my current issue - only one frame is modified, and the other frames remain the same.

What I've tried so far: The obvious solution I thought of was selecting all the frames at once, holding shift. However, that only solved my problem partially. (when I tried to paste new elements to the composition and move them around).

The other solution I came up with, based on my previous experience, was to copy the whole static elements and paste them into a new project, editing what I wanted to edit onto the new tab and pasting the whole thing into the gif project again. Everything worked fine up until now. Then I decided to add some shadow to the render image. Things went downhill again.

With shift pressed, I selected all frames and clicked on the render to add a shadow. However, the only frame that was modified was the one that was visible. I then decided to add shaddow to the single image manually. Started from frame 2 to 15. When I clicked on frame 1, everything reseted. After I added the shadow to frame 1, I clicked on frame 2 anda the f(x) shadow was gone! Same thing to the remaining 13 frames!

I copied all the background and pasted on a new layer without the shadow thing and added the shadow there. Pasted back and, surprise: same issue. Only the the visible frame had the shadow (even though I had selected everything at once).

Combining all the gif layers into a smart object didn't work either...

The strange fact is that the render's white outline (check the screenshot), which is also a f(x) feature, worked just fine! (with the copy-and-paste-into-a new-project solution)

Am I missing something or is my photoshop bugging?

So basically you're working backwards. First create the image, add all the shadows and effects you need and then animate it.

Also, if you want to add a shadow on all those different frames it will be very long to make sure it animates smoothly along with the existing movement.

Not the answer you're looking for? Browse other questions tagged adobe-photoshop cs6 background gif overlay or ask your own question.

0
Embed a GIF onto an existing PNG file
1
Photoshop CS6: problem with cropping animated gif after moving layers
55
How to convert a video file into an animated GIF in Photoshop?
1
Moden era GIF replacment in photoshop?
0
How to apply layer style on the same layer on all frames at a same time
1
GIMP - GAP Extract Videorange Only Gets First Frame
2
How to make animated gif of typed code
0
Using Illustrator vector layers in Photoshop for Gif
3
Animated Gif on Gimp with Drop Shadows
2
How would I go about fixing this gif?