How to make realistic shadows in composites?

Currently I'm practising doing compositing combining different photos to make them look like taken as a single picture. I find it quite difficult. Especially making realistic shadow. What do you think about the shadow in the attached picture? Any tips how to make it believable? Please also share your feedback what do you think about this composite in general, I'm open for constructive criticism :) 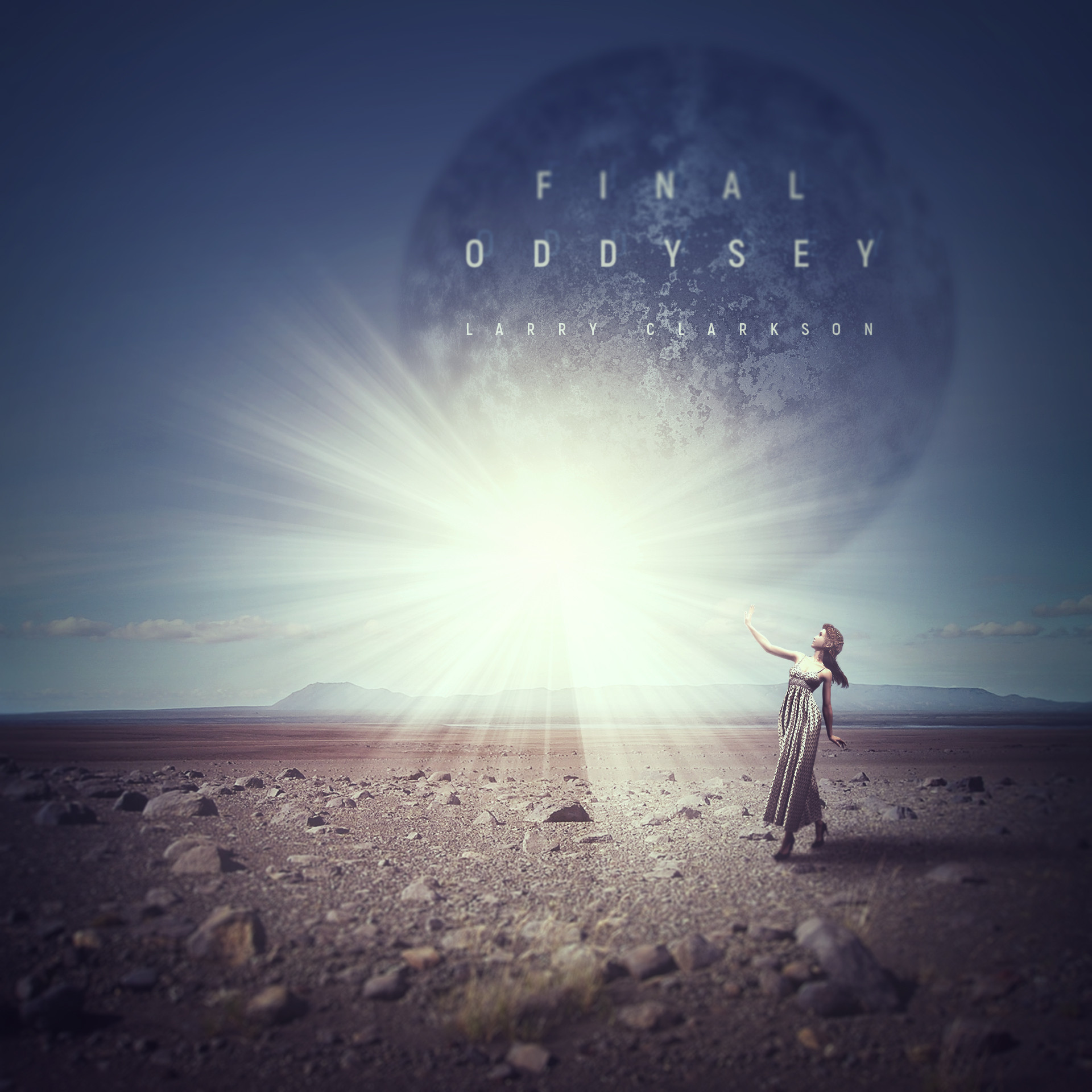 Update: Thank you for all the wonderful feedback. I tried to improve the shadow making it shorter and different direction. To keep it simple I also flipped the rocks to match more the central lightning. Still doesn't feel right, maybe longer shadow? Let me know what you think :) 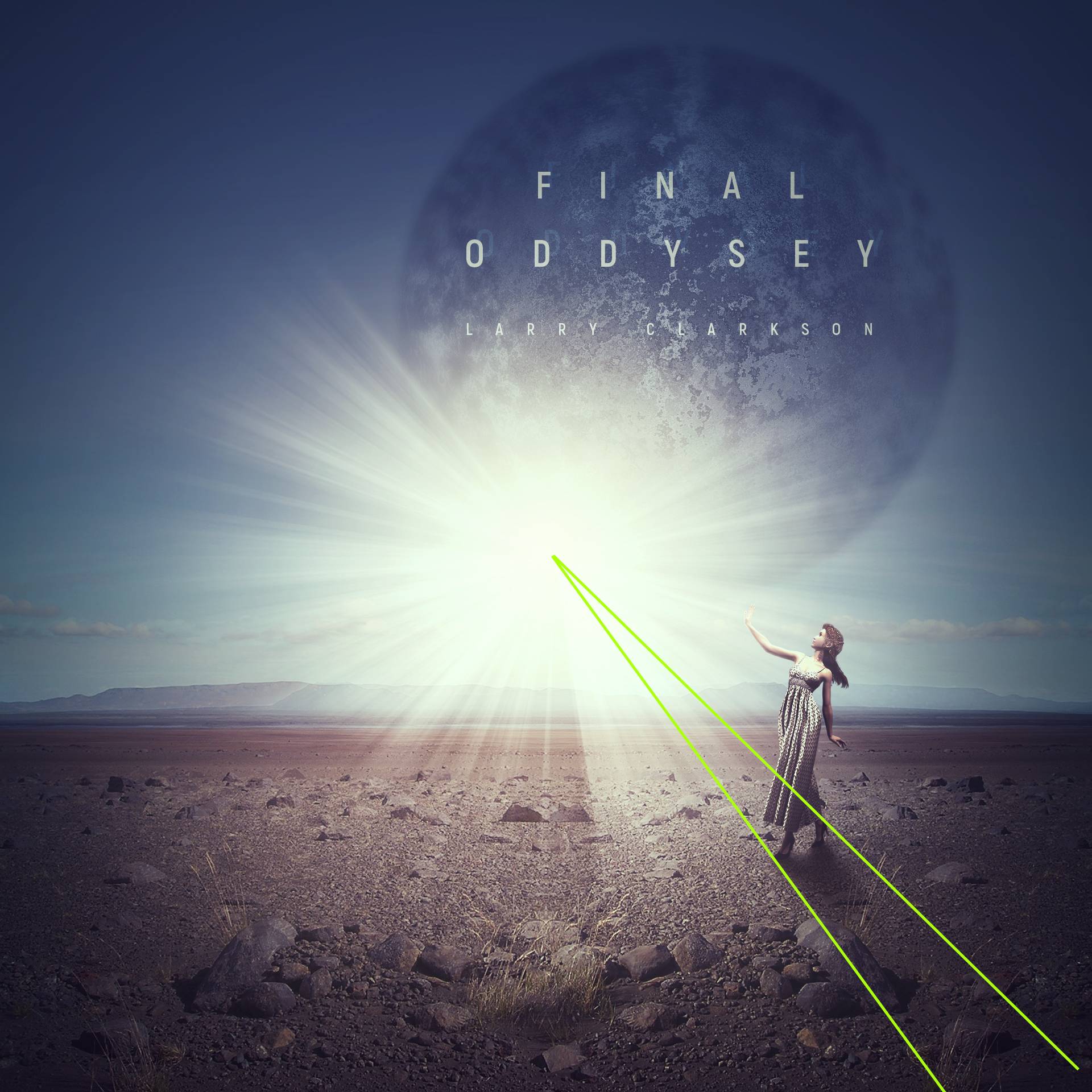 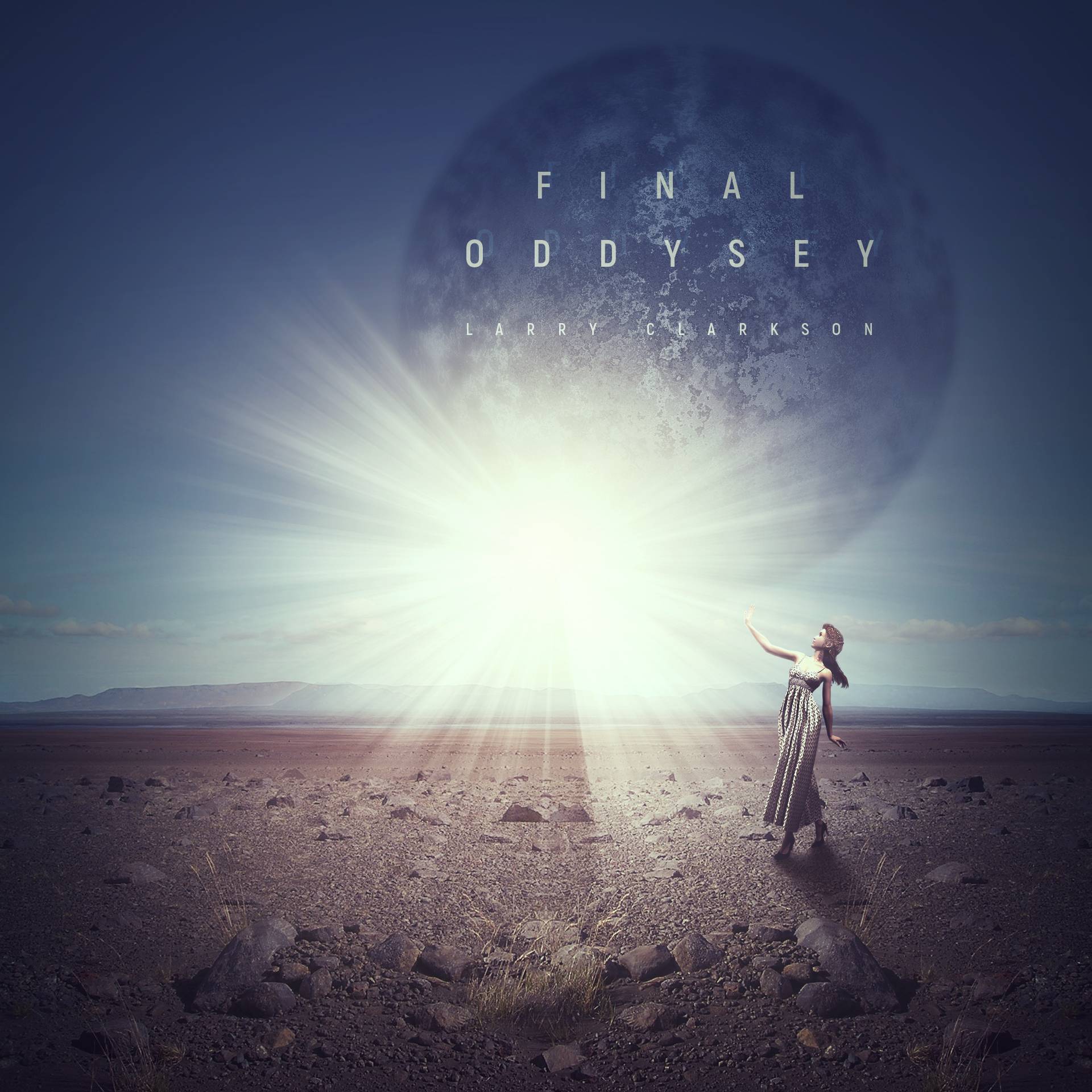 Here is longer shadow, slightly different direction. Should the shadow expand the further it goes from the subject? 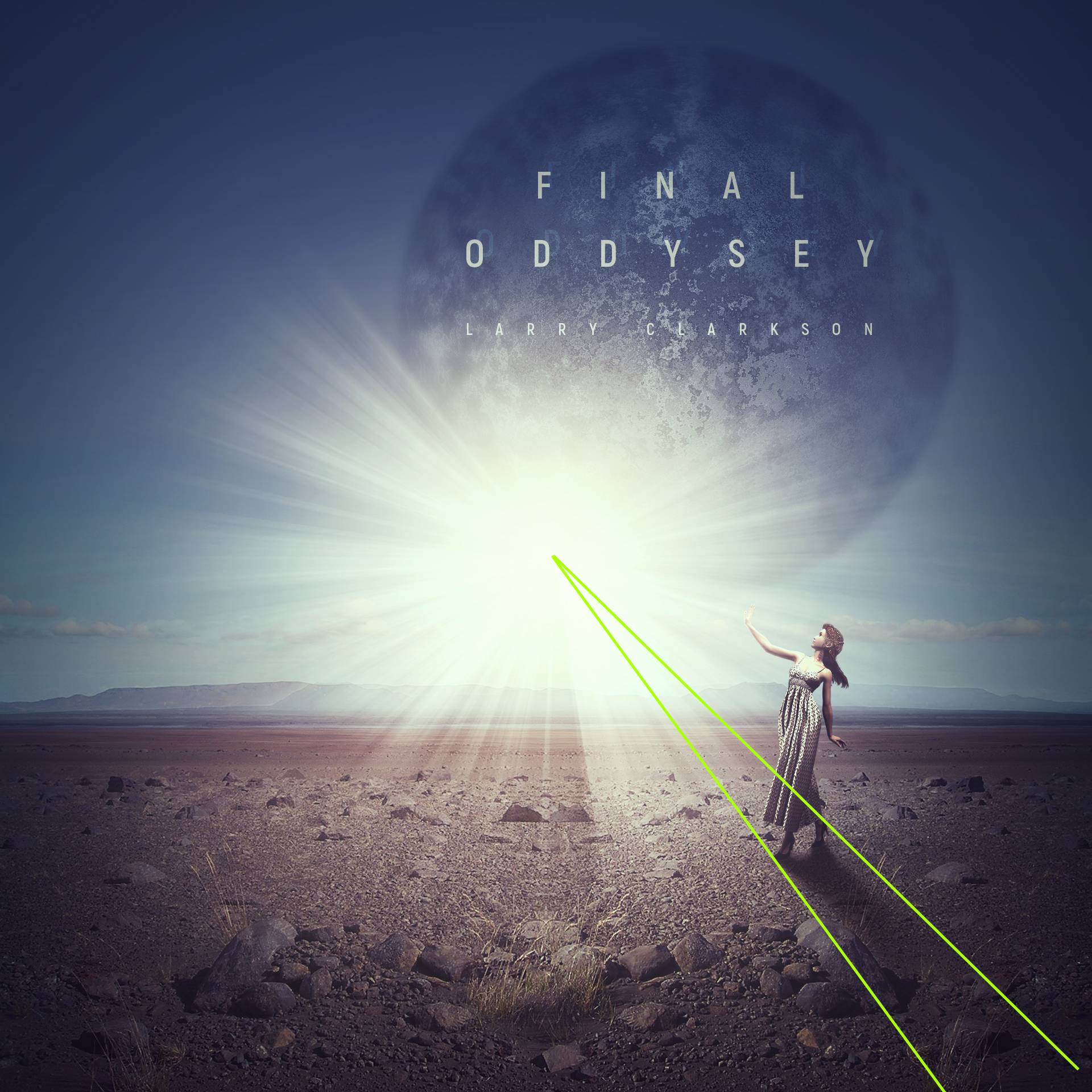 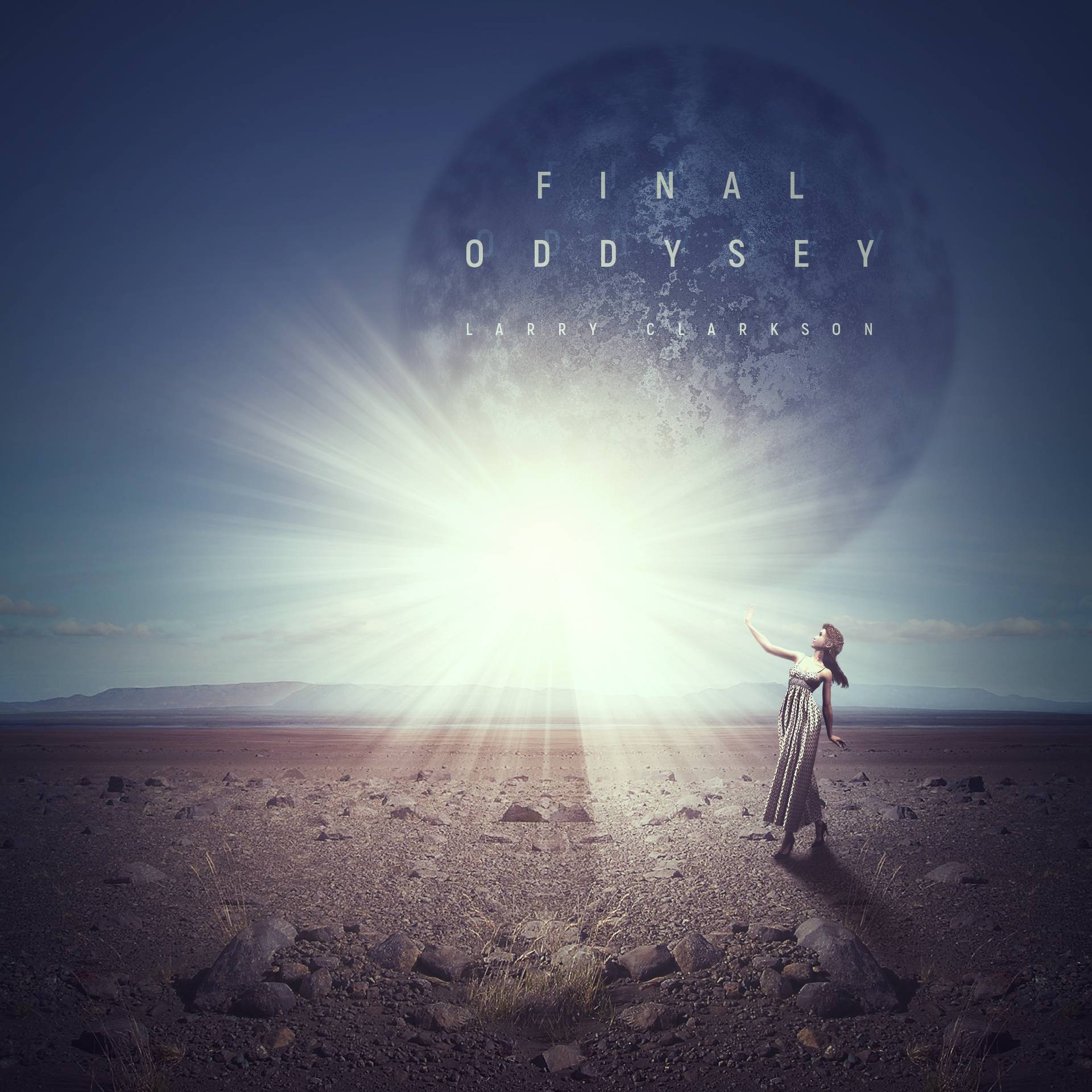 If the glare is supposed to represent the sun, then the shadow of the figure is pointing in the wrong direction. Look at this. It shows a rough idea how shadows fall for a distant light source like the sun. 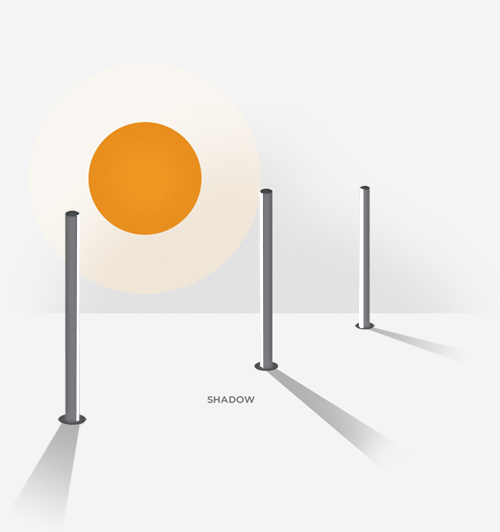 Also in your example the shadows and highlights on the rocks are not in the right direction. Notice how the highlights and shadows fall on the poles in the above image in relation to the position of the sun, the same would happen with the rocks.

To help you get the directions right, it might be worthwhile drawing up a perspective grid with a vanishing point directly below the sun. 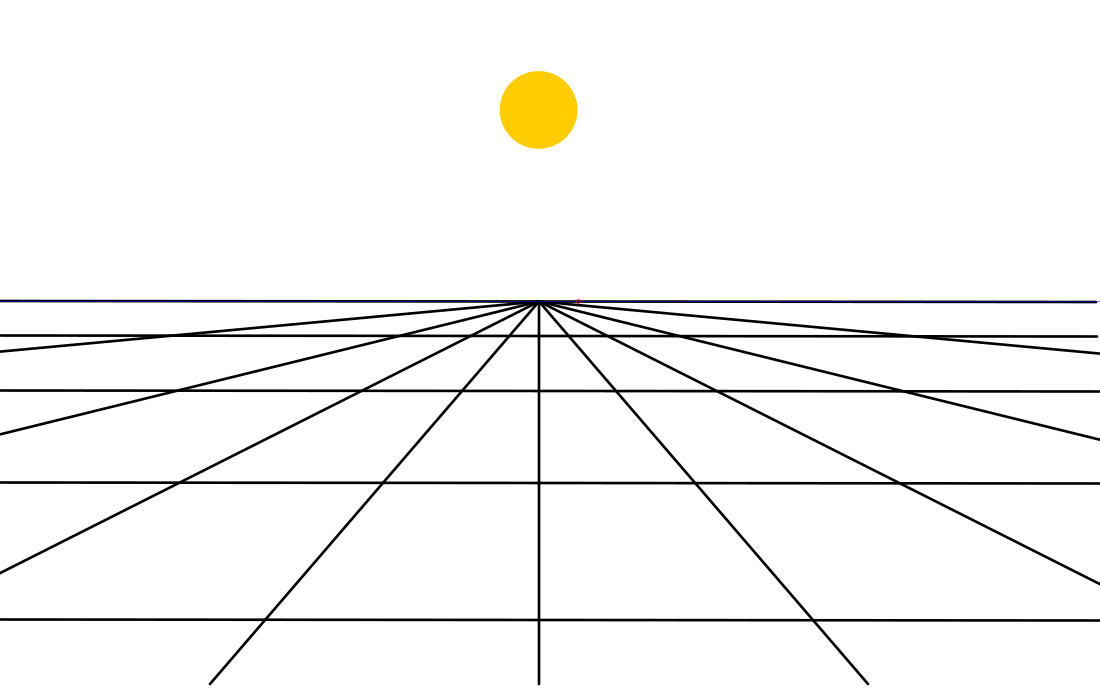 I don't wish to come across too harshly...

Lighting in photo composites is the hardest, most difficult aspect of any composite. You need to ensure all lighting is seen as coming from the same direction(s). ANY variation on that immediately ruins all "realistic" impressions you may be trying to convey.

You've got multiple light sources in the image, all varying. And that is disregarding the huge "radial blur flare + vignette" in the center of the image. To be frank, the only thing that flare appears to be lighting is the center of the image and the edges.. nothing internally at all. It looks "slapped on" last minute. 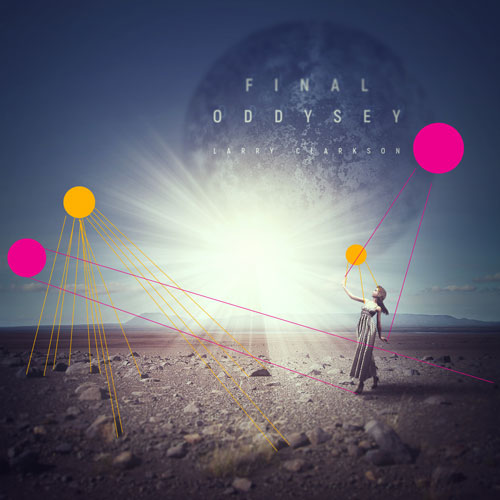 The yellow circles/lines show where primary lighting seems to be. Note that it is different for the rocks and the girl. It's clearly not the same light source.

The magenta circles/lines indicate secondary light sources -- Lighting which is not a bright but clearly casting shadows. This is often due to ambient lighting as opposed to direct lighting.

The methods to paint proper lighting would be far too much to go into detail here, but you can search the web for "How to Paint Lighting" and you'll get some good resources that way [1],[2].

Like this, probably have to clean some of the rocks up too. 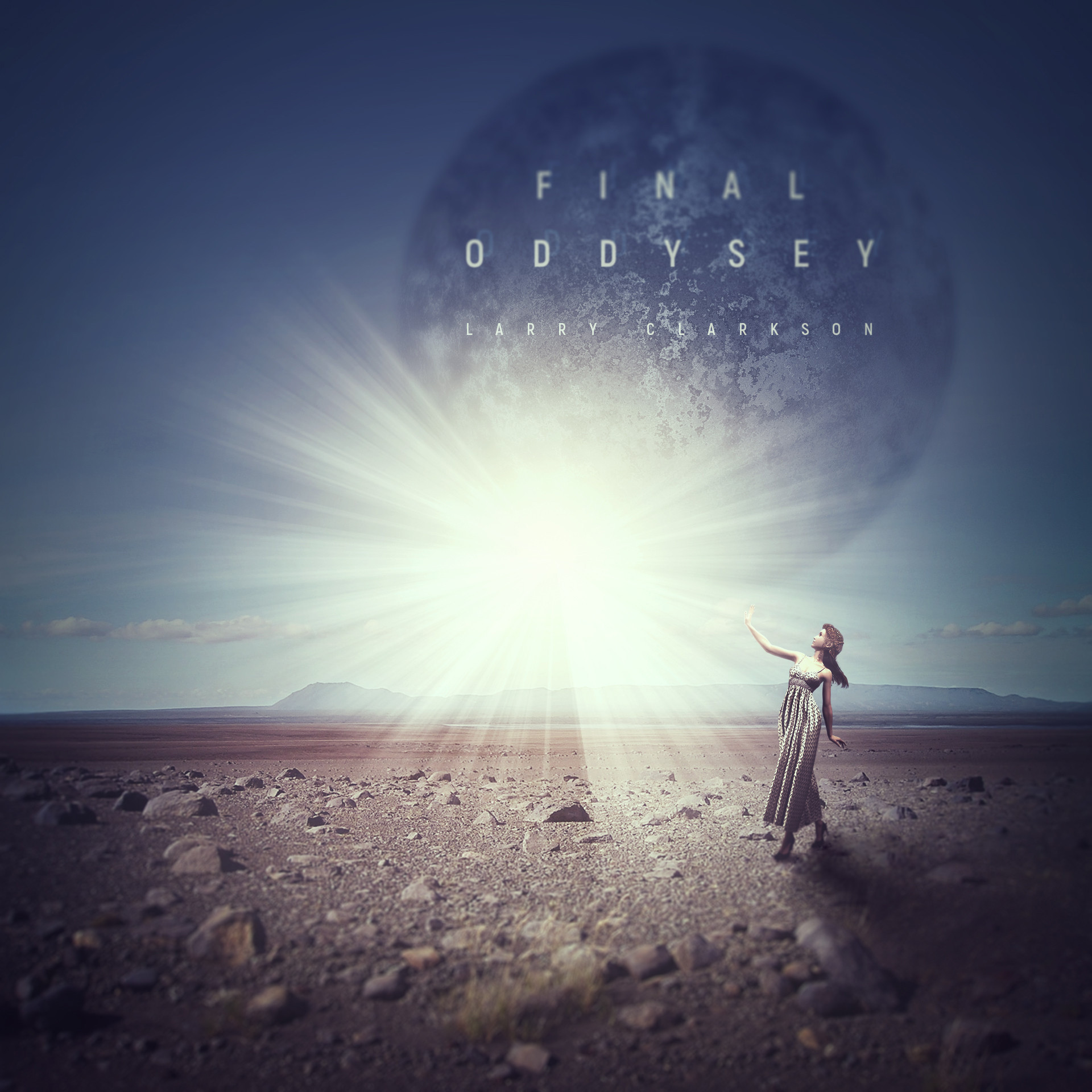 It also good to tie shadows together, so here I tie her shadow to the shadow at the lower right corner, it directs your attention around the image and makes if feel more anchored.

The three big rocks on the left should be shaded on the opposite side they are now, and a few other minor tone issues (like the bright spot on the big rock in the lower right), that I will leave for you.

I think the biggest problem you have right now, besides the direction, is the falloff. Think like a beam of light, it doesn't get more dense the further from the light source, it radiates out and weakens as an inverse square, double the distance quarter the power (like gravity too). This is because it's spherical and the surface of a sphere is 4πr^2, basically inverse square happens because of the relation to volume and area of a sphere. But shadows are a phenomenon of light (or lack of light) so much like the light they tend to widen and dissipate over distances. I mention this because to do light effects (realistically) you have to know how light works.

There is a lot of geometry in light and shadow, I mean the Greeks basically calculated the circumference of earth just using shadows and geometry.

So with the one you have it seems to get narrower and maintains it's darkness even wen moving away from the source. The one I did is sort of like a cone with the point cut off at her feet. So there is some falloff to the sides, it doesn't lighten so much as it moves away, but this is because it blends into the shadows at the corner. 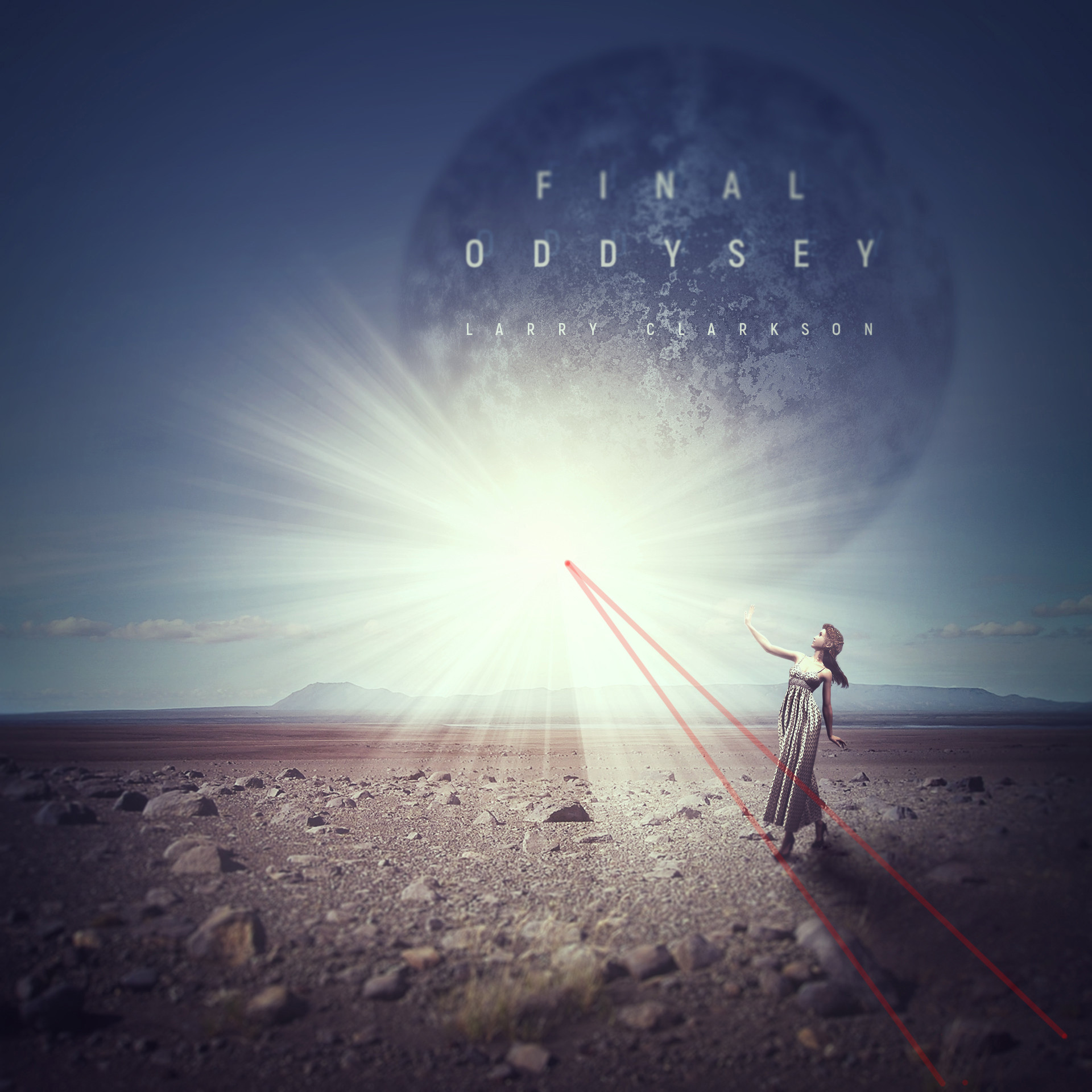 The rocks are a bit harder to fix, if I had the original of them without the vignette adding shading, I would vertically mirror the ones on the left and then patch the seam, that way their shadows would be on the left and not the right. But with that extra shading by the vignette effect, it would take more time then I care to spend.

Also the lettering looks a bit to "Fuzzy" for my taste...

It might help to create a more defined sphere to give scale and position to light you have. It's a bit hard to tell if its right next to her or if she's a little in front of it. Likewise I took it as floating directly over that rock in the middle of the image but it's really not clear if that's the case or not.

Consistent shadows are explained already in other answers. But there's also the possiblity to change the source of the light to match better with the existing shadows. Another possiblity is to make some small shadow inconsistencies unnoticeable by bringing up other things, for example a strong incident that happens or is just about to happen.

For example I can guess that the shiny light isn't the sun, it's something at much shorter distance, it's a property of the blue sphere, which also is quite near. With that assumption some misplaced shadows which still are left, do not harm. Only make the assumption more obvious by bringing the blue sphere and the light more on the top.

The flat texts (placeholders, I presume) surely cannot be a part of the blue sphere, so move them totally apart or map them as curved on the sphere. I suggest "apart". See an example: 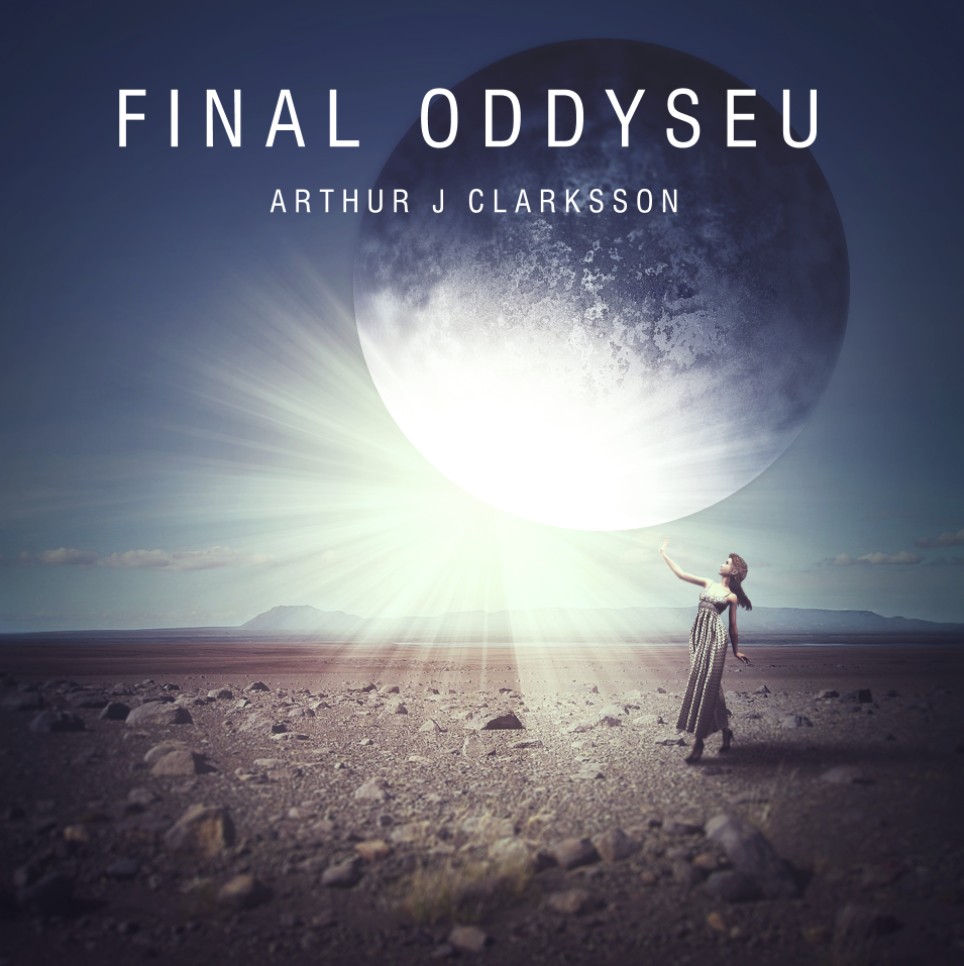 An incident: The big shiny blue sphere itself is already quite unusual, but it can be made stronger. One stroke with a large smudge brush brings up the moment just one microsecond before all shadows became unimportant. 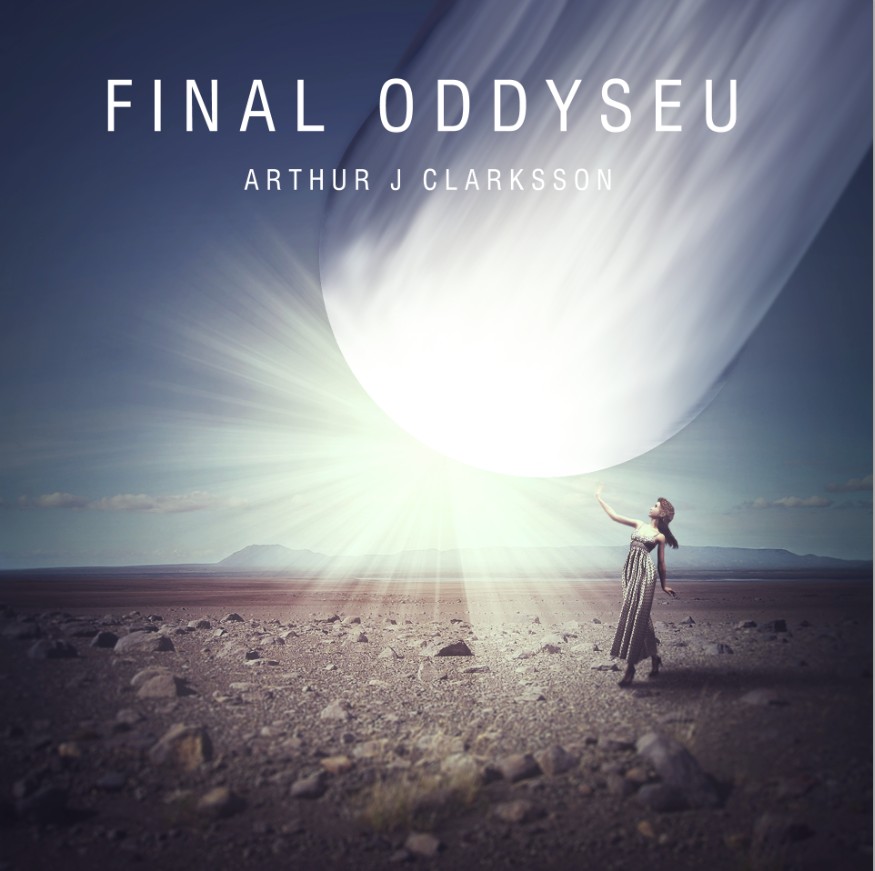 0
Increasing region luminosity in Photoshop
0
How can I make these overlapped images more realistic?
2
Is this shadow realistic (photo composite)
5
how can I make glitter tears effect?
5
How to approach cleaning up an emergent moire pattern in a low resolution image?
2
What are some techniques for designing realistic-looking planets and moons?