I'm a newbie with these tools but i need to do a kind of drawing that should be scalable. I would like to reproduce the same kind of waves of the wifi signal but connected each other like below. The orange color is what i would like to have and that i can't achieve in one perfect path. 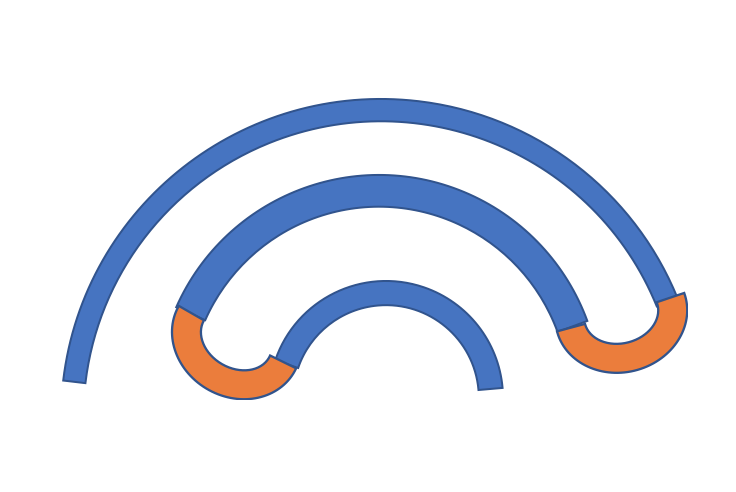 So i tried to start with half circles or polar grid but don't know how to make a clean connection. Adding circles seems to be the best idea i had but difficult to place and connect them exactly

I would set up some guides, and use the Curvature tool to draw one continuous path. Then I'd finish off by using Live Corners to fix the curves.

I'm sure you can get the general idea from this example:

One way is to use circular paths which have calculated diameters.

5-6. You can change the line widths and colors

These are still strokes without fill, but you can outline them when you are ready. Joining the arcs combine them to one object.

In Inkcape the same method works, but the circles must be sized with zero width stroke because half of the stroke width is inserted to the radius. Inkscape has easy to use Path > Divide command. It's easier than messing with the node tool. Only remember convert the circles to paths (Path > Object to Path) and have three copies of the line, all raised to top.

If you work in Inkscape, and make outlines, you have Path > Stroke to Path. It's possible that after conversion you notice a gap between the segments It's invisible, but appears when you try to make an union and add a common stroke & fill. The gap gets stroke, too. It can be avoided by dragging with the node tool the seam corners to snap or overlap.

A random coloring after making outlines: 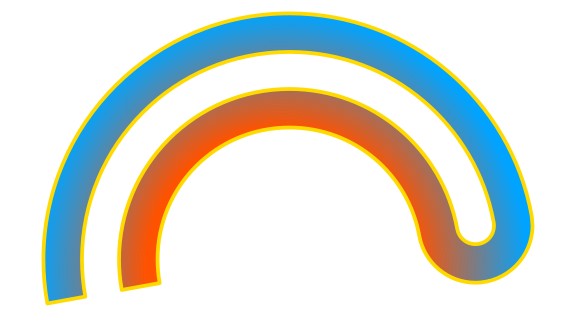 7
How can I create perfect "radio waves" (concentric arcs of a circle)?
4
How to construct logos/letterforms with circles?
0
Illustrator: Make a compound path a single path
1
Illustrator Path Exclusion
2
Illustrator CS6 Pathfinder not creating one compound, expanded shape
3
How to vertically *and* horizontally ditribute all objects in a grid in Illustrator?
4
How can i join two paths without losing round edges of one path?
0
Illustrator: Using 'Unite' Function in Pathfinder Window Creates Erroneous Anchor Points/Shifts Shapes