Placing artwork on a pyramid is simple, if nothing continues over the seam. The content on all sides can be placed and positioned separately.

Let's have a pyramid. It's of the common type (=the sides are equilateral triangles). Place your artwork slices A, B, C and D onto the triangles:

The angles of an equilateral triangle are all 60 degrees => Rotate them with 60 degrees differences and align side by side. Here are 2 possible ready-to-print arrangements:

If your artwork happens to be designed for placing onto a pyramid or you do not care of straightness, fitting and symmetry, you can place the artwork directly on aligned triangles.

Designing a shape which fits on a pyramid and continues over seams is discussed here:

Things start to be tricky, if your drawing (which can also contain some texts) isn't designed for pyramid and you want to print it over a seam to have enough room. How to map the image without losing the continuity on the seam? In addition the texts must be well readable over the seam and all graphic shapes must be recognizable, preferably like there's no seam at all.

We try few different methods with a random drawing. It should be placed to cover a good part of 2 triangles The red line shows the wanted place of the seam. 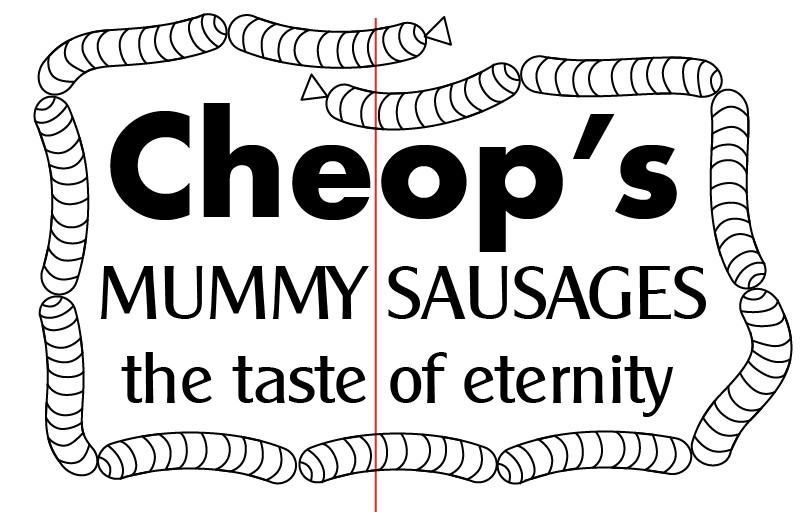 The texts have intentionally letter spaces on the seam. This is optional, but it reduces the needed accuracy and there's no need to split individual characters.

The simplest approach is to place the drawing as is, Here it's as flat and as seen on a pyramid. The 3D view is "perpendicularly towards the seam" It's nearly the isometric projection, but seen from a little higher angle, just about to reveal the back side => 3D "renderig" is made simply by squeezing horizontally to 82% (checked in a 3D CAD program) and adding some shading

If the drawing is stretched horizontally to 121% before placing, the 3D view would be undistorted:

Unfortunately the view is perfect from that one direction. From elsewhere it seems tilted and distorted. Here are 3 different views of the same arrangement as a screenshot from a freeware 3D CAD program (the drawing is stretched to max size): 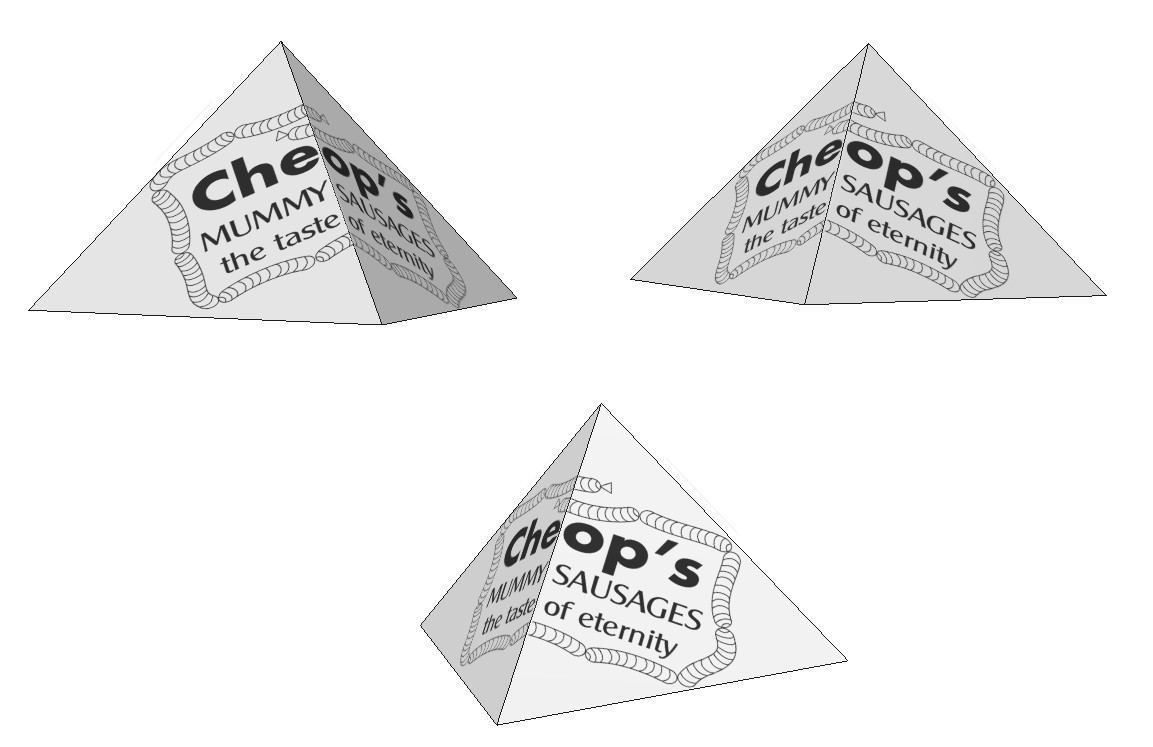 The texts are tilted and they have a sharp reading direction bend on the seam, when the watching direction is not the optimal one. You must radically distort the drawing to make the reading direction continuous or at least natural looking (=horizontal). Unfortunately that really means heavy distortion. There are infinitely different possiblities, but we discuss 2 of them. See the flat images:

In the left there are drawn (=blended in Illustrator) parallel lines which are horizontal after the triangles are bent to pyramid.If text are forced to follow these lines, their reading direction is natural altough there's an angle at the seam.

In the right there are circular arcs. Texts will continue smoothly over the seam, if they are forced to follow the arcs.

NOTE: Actually the texts must be curved only at the seam. They can be horizontal to the left from the red line and to the right from the green line. We skip the mixed version

Forcing texts along circular curves without splitting the drawing to parts is possible with Illustrator's Envelope distort. Preset warp pattern "Arc" works for this:

We see the bottom of the drawing is bloated. It would be useful to redraw it. Just in this case it would be easy, because it's a curve with a pattern brush. But that's actually like the drawing was redesigned to fit on a pyramid.

Forcing the text lines horizontal is possible by applying Illustrator's transforms. Left and right halves need opposite deformations. Most easily this is done as follows:

Step 3 is optional, skewing can be enough. NOTE: The free transform tool is tricky. To drag a corner you must

To drag 2 adjacent corners symmetrically holding Ctrl isn't enough, you must at the same time hold Ctrl, Alt and Shift keys. If you stop dragging and want to continue, you must start from the hovering.

If you make these as physical printed pyramids, they would not look right (tested) because there's a conflict. The drawing is printed on the tilted surface of the pyramid, but it's like a vertical folded poster. Eyes do not find the right interpretation. It can be helped by adding some detail which make the lie "they are folded vertical posters" stronger: 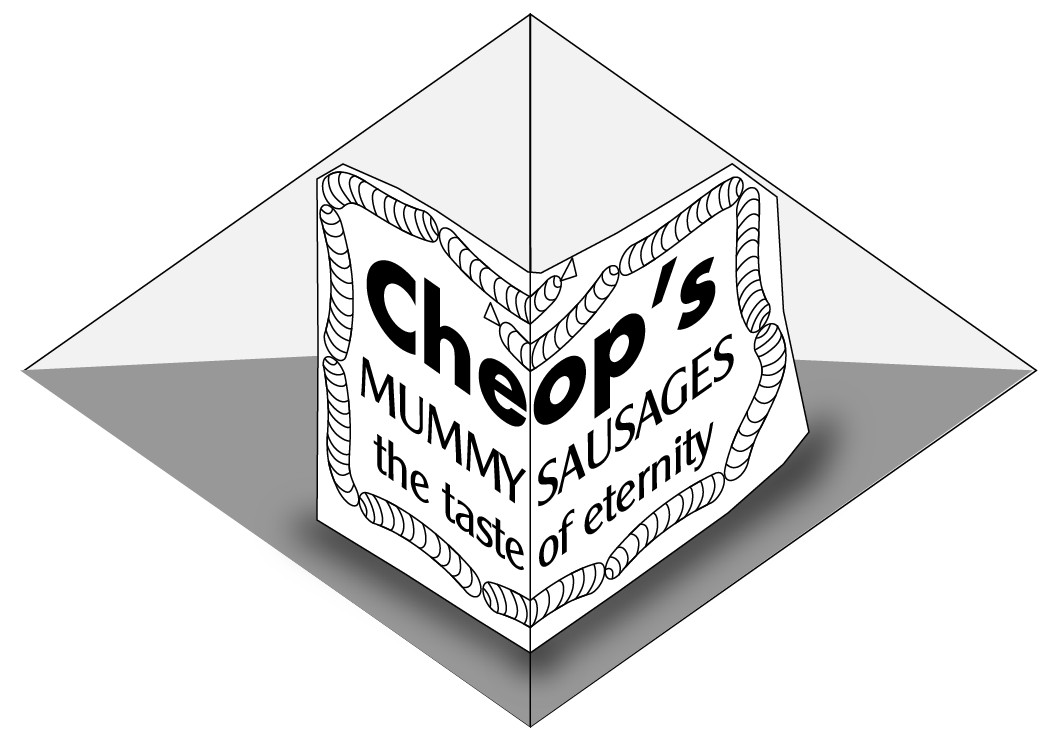 I tried this in practice (=printed a non-squeezed version, clipped the extras off and folded it to 90 degrees). Watching it only one eye open (=no stereo) the eye suddenly accepted the lie. It took about ten seconds to forget the stereo view. => When watched both eyes open, the distance must be several meters

I do not understand what is the distortion, because I asume a pyramid has flat faces.

If you are looking for a specific projection, for example seeing the image from a top view, a cenital view, I would use a 3D program like Blender, project the image and unwrap the texture.

The first option that you have would be to create a grid on the flat transfer surface large enough to encompass the pyramid. Use lines of sufficiently small spacing and as thin as possible, to get best resolution.

Cover your pyramid with removable printable material (paper?) and perform a transfer print.

When you unwrap the paper, you'll have a clear outline of the printable surface. That's one step accomplished for your template.

It would be necessary to scan in the paper to transfer the grid pattern to an image editor such as Photoshop or Paint Shop Pro. I use PSP and occasionally "un-distort" an image. In the case of your grid, you would use a similar method and create a template for that tool that would duplicate the distortion in the opposite direction for your art work.

Alternatively, less easily accomplished and dependent on one's skill with 3d modeling programs (Blender comes to mind), you could model the pyramid to scale, create a grid to represent the texture of the model and impose it on the model. Once placed, you would then "unwrap" the grid to create your template.

Texture in the above context refers to assigning colors, gradients and images to surfaces of a 3D model.

I see Rafael has provided for this same option in his answer, posted while I composed mine.

I have worked with pad printing many years ago, and we did print on many irregular surfaces.

To reduce problems we always fabricated a special cradle for the object to be printed on, to make the surface as horizontal as possible (our printers had a vertical axis).

You don't need to worry about distortion due to the shape of the pad, because if the pad applies the same amount of pressure to the image plate (the one with the ink) and the printing surface the print should transfer without distortions.

The true answer to the distortion replies is this is a square bowl that is upside down to print the out side. The bowl comes in 3 sizes. I expect that a flat screen print transferring to an upside down square bowl will distort. Other bowls will also be in the mix that are round and steep sided. All new kinds of process challenges we are not currently versed in. 3D modeling is possible. Solidworks can output in photoshop or illustrator formats but I do not know if the are still 3D when opened. Heard of Blender but not familiar with it.

4
How to isolate artwork from games for fan art
0
Novice on adding Layers: when is a project “done”?
4
Print true black from Photoshop
3
Issues with large scale print
0
How can I fix printed colour problems with images designed in Photoshop?
2
What are some techniques for designing realistic-looking planets and moons?
0
How to create custom Patterns that can be applied with Value and Density in Adobe Photoshop?