I am new to Digital Art and it's a completely new world. I used to make sketches on paper and was accustomed to the usage, flow and technique of applying brush strokes in the real world. I am getting into the world of Digital art slowly but I ma having a hard time with brush strokes.

Let me be a little more elaborate, when I was painting on canvas I was able to bend all the brush strokes together. Even if I apply a new brush stroke upon the previous one it used to blend with the old one. This doesn't happens in digital art due to transparency, if you apply a new stroke upon the old one both overlaps and a darker color appears in the overlapping area (I found a fix to this here within the GD Stack Exchange forum), but my question is something else.

Until now what I was able to guess is that, this over-lapping is happening because I am picking up the stylus from the digital tab while I drawing/creating a brush stroke. As soon as I making a new stroke again putting the stylus down on the pen tablet the previous stroke is over-lapping. If I continuously paint my artwork using brush by putting my stylus down the overlapping doesn't happen.

So, can anyone tell me exactly what's happening here?

Any video tutorial on using brush strokes will be very helpful.

I use Krita, not Photoshop so I can't point you a solution specifically in Photoshop. I will first point a quick possible big "why" for your problem and latter point other possible problems from digital vs traditional. Be aware that many visual aspects of the big "why" point can be a reflex from other points I point later.

Take in mind that much traditional paint intended tools like Corel Painter may not work as I describe, only their programmers and God knows what it make to get those results, for sure beaffy computer :), it is not a bad tool, but I can't explain how they get from traditional-to-digital-mimic.

Only programs like Corel Painter (mostly CP in particular) will help you mimicking extremely well many behaviours, as water colors borders, the 3D we see on strokes soaked of oil/gouache/acrylic/etc texture, the effect of paint infiltrating wet paper, etc. all this need to be "built" by the painter in those more digital image manipulation like programs as Krita and Photoshop, to avoid patterned or not much realistic results. In those cases you will be better with some program like Corel Painter, but be aware, programs like so have an absurd (really absurd...) amount of settings.

What you primarily want most probably is a brush that applies color through smudge, dulling, smearing...

It is not the common way of digital brushes, it apply color mimicking smudge/smear/duling of current brush with the current layer plus a a color if wanted, is the nearest simple approach to something somewhat similar to what happens in real world. Almost 90% of my work in my painting is result of smudge brushes from Color Smudge engine in Krita. Here is an example of the wet knife brush with a texture nib: 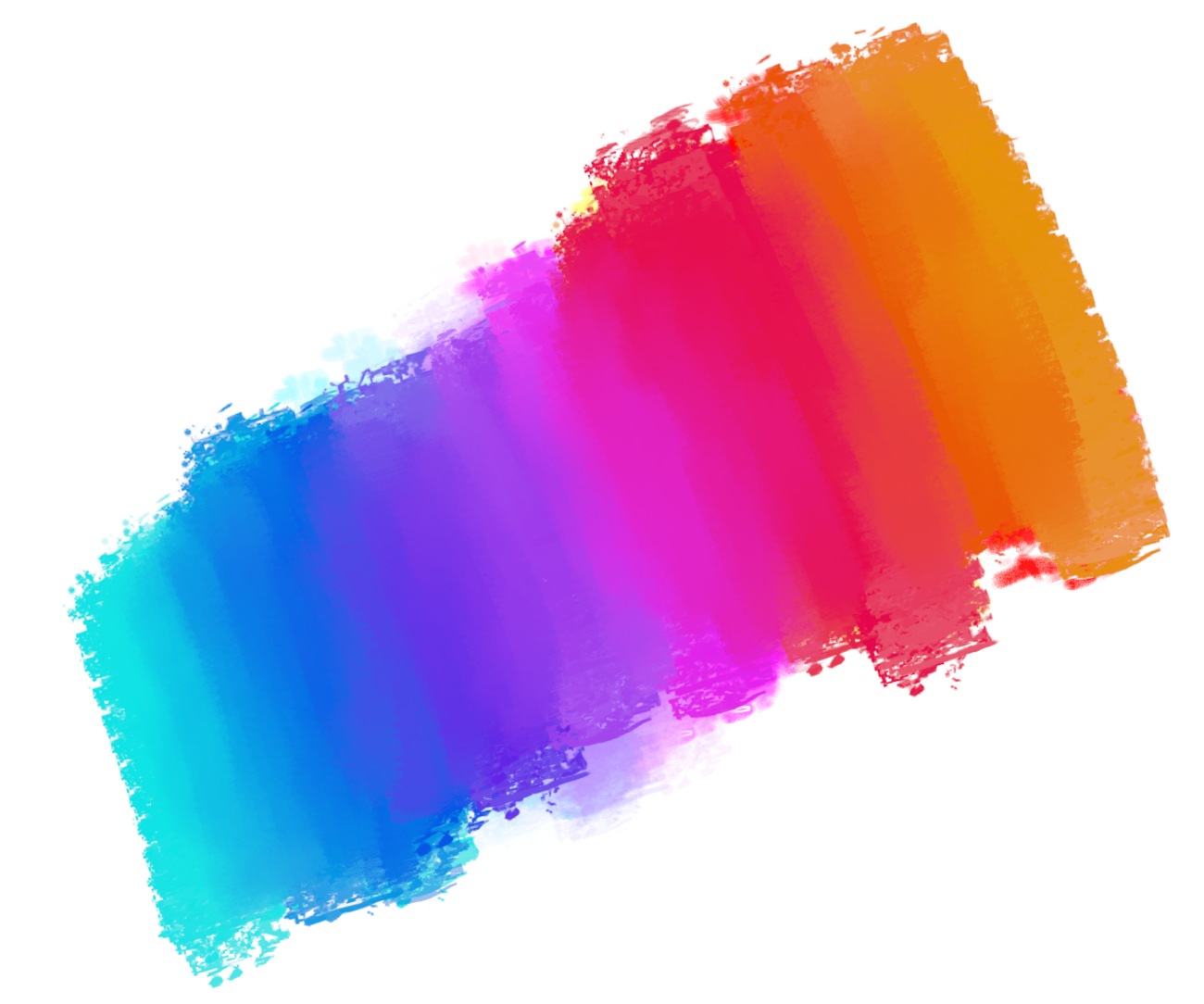 A a better contrast variation to better illustrate the texture surviving the painting plus some zoom: 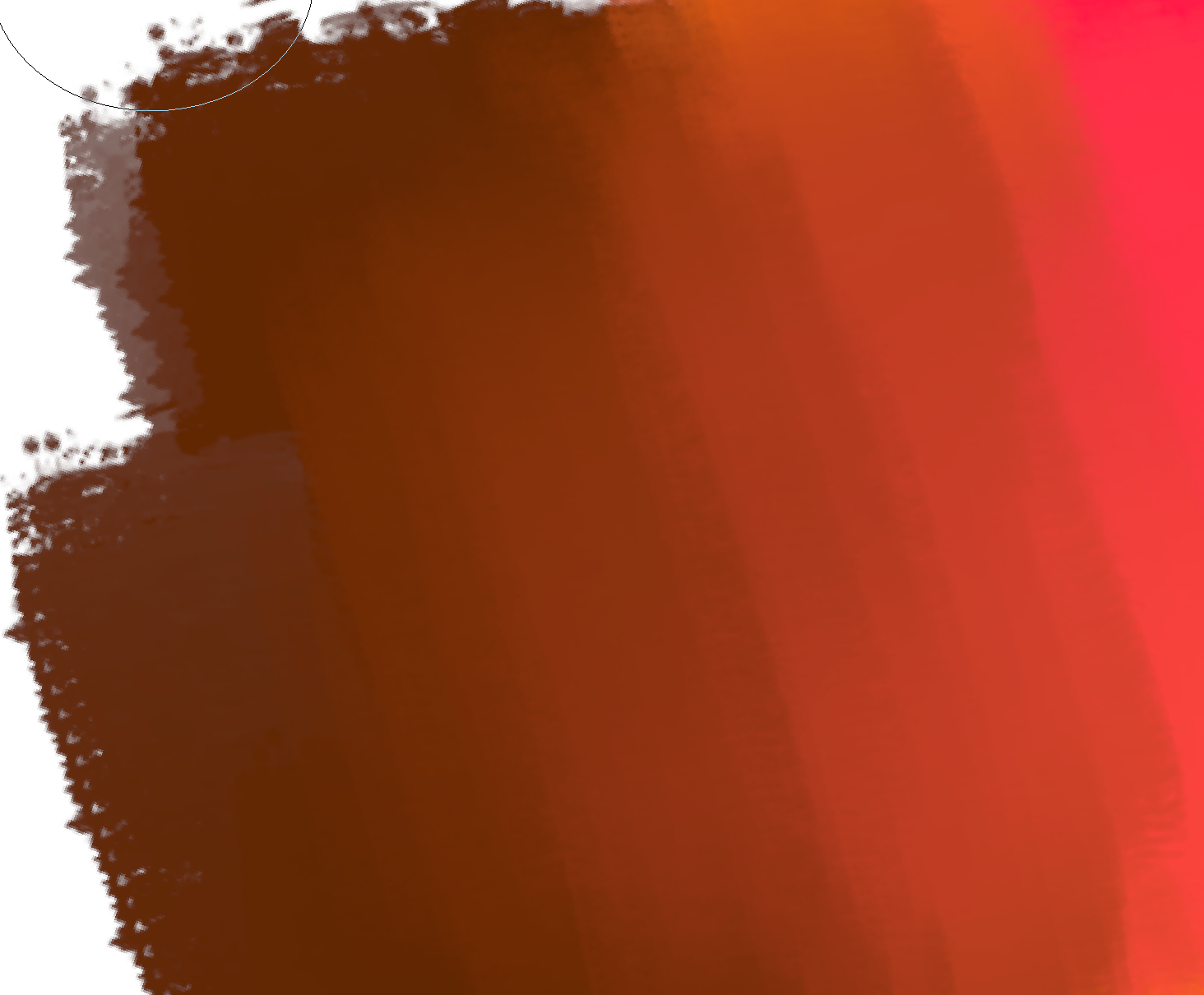 All the time I use the same brush wet knife, with 100% opacity, but default settings apart from a texturized nib, I paint solid colors by using the brush with max pressure on pen, after that I use the hotkey ctrl+click on canvas to pick color from canvas and start painting with it changing pressure to get desired result, I go picking smudging until I get desired results:

Here is a example in one of my works of a result that is almost only smudge brushes + blending modes:

Anyway your problem can be a mix of lack of knowledges about digital vs traditional in many areas, let me list some extra important points:

They don't smudge like what happens in traditional media where we can smear things in the media (paper, wall, fabric), particularly they don't look like stamps because generally they are configured with very small spacing, in the first brush stroke spacing is big, in second one it is very small:

As other brushes they also have many other properties that can be controlled by drawing tables inputs like pressure and x, y coordinates variation, for example some of those properties are: opacity, size, rotation, color, and even spacing of this stamp among others.

This is probably one of the most annoying, first contact with digital, nobody-knows-about problem. Many painters get accustomed to build the mix they need because of this digital limitations, after this they pretty much get used to it but it can be really confusing and is not optimal.

We are more sensitive to low light variations so computers do it to better represent images with less information (the "common place" 8 bits) as we don't perceive those bigger light variation on bright areas, the problem is that it result in absolutely wrong color mixing maths so, summing colors give not proportional/correct bright/hues/saturation.

Paint with a canvas with linear srgb color space and 16 bit integer depth, you really don't need more than 16 bit integer but 8 bits will not be enough in a linear color space, remember, as discussed non-linearity is used to increase the steps betten dark side values, so we don't perceive those steps in 8 bits, we only have 256 steps in 8 bits, making steps linear, the painting math will run more sanely but you will perceive steps between values on the darker spectre with 16 bits it goes to 65256 steps.

Here is an example of a painted circle, those colors are product of red, blue, green mix with smudge brush without any color applying while smudging, the first one is a linear TRC sRGB colorspace (gamma=1.0), the second one is traditional sRGB (gamma=2.2):

Depending the way your program work, there exist more than a "painting mode"

Krita has a wash and a build mode, those are the results, from left to right, the upper are multiple strokes and the bottom are one big stroke, same opacity: 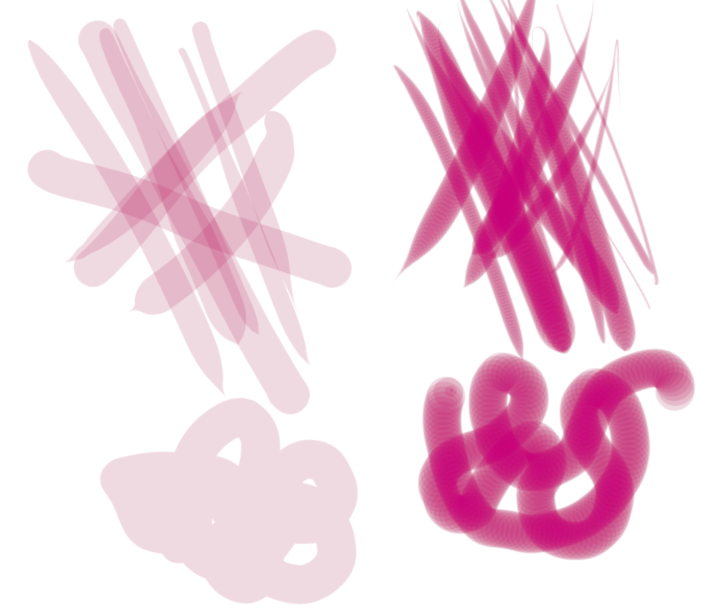 I believe that what is happening is that in first one, the same stroke multiple stamps that build it, are not overlapping, only different strokes, and on second one they are overlapping in all cases, even if from the same stroke.

In Krita there exist a blending mode that absolutely limit stroke opacity and so you get this result with many strokes: 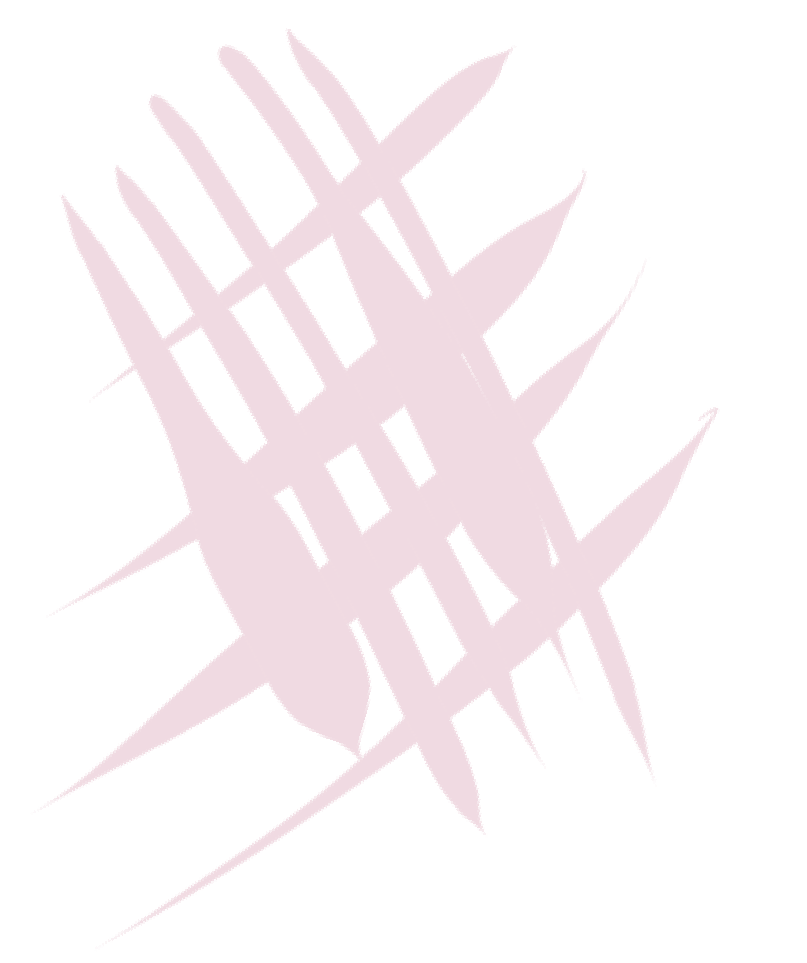 What's happening here? You can paint in Photoshop over the same place without filling the brush texture to 100% color, when you do not stop and pause, but move the brush back and forth or circularly.This is because the result is calculated starting from empty paper until you have stopped and paused. The next stroke starts from colored paper.

Airbrush and 100% opacity, but sub-100% flow modes cumulate the color even without pausing and stopping.

I am a poor painter, but I have investigated the in-Photoshop painting problem for others, who can make real paintings with real colors and brushes.

PS hasn't plausible brushes which obey a real painter. Normal PC mouse follows painters hand as well as a brick. Graphic tablet with pen and pressure sensitivity is better, but there's still only a fraction of the control that 15 years trained painter could usefully apply with a real paintbrush.

Non-painters of course benefit from the restrictions, because there's less room for all uncontrolled random movements. Just like playing a simple melody is much easier with a piano than with a violin.

When painting with PC, the stroke texture easily gets filled, as you have noticed. Painting the same place twice with many preset brushes kills the brush texture or there's no texture visible even in the first stroke except possibly at the ends. It's like example 1 in the following image: 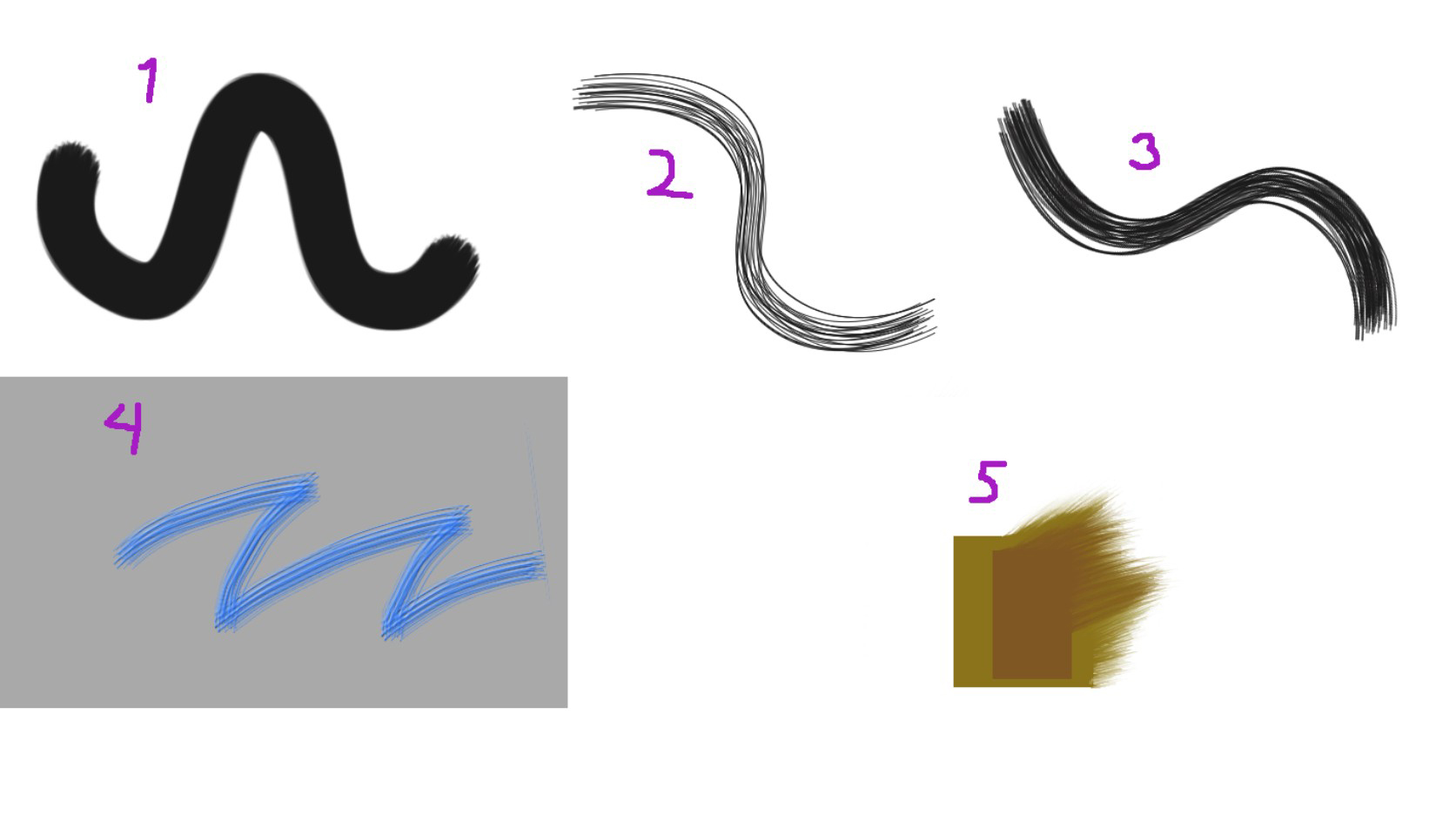 This can be helped by using a sparse brush like example 2. It unfortunately is sparse, like a bunch of wires.

It can be made denser by painting over or copying with reduced opacity and a little shift (example 3). If it happens to become too dense, the texture can come back when one paints over with color reduction (=clear) blending mode.

All this is Photoshop trickery which isn't any more painting. It helps to get over the limitations, but suffocates easily real painter's flow.

Thick strokes are often like 3D extrusions. That can be simulated with layer style Bevel&Emboss. This is in low resolution in ex.4, but also in the next image with higher resolution:

Upper version has Bevel&Emboss. There's also layered a plain copy, because individual stroke straws lose much of their saturation. It's masked by highlights and shadows.

The background is grey because the highlights cannot be noticed against white background. It would kill the embossing.

Bevel&Emboss can be ON during actual painting.

Ex.5 shows one good reason why my ultimately sparse brush exists. It can be used to smudge a clean edge to hairy like a dry brush. Smudging with fast fading strokes is quite plausible. I have fixed with it many hairs, beards and furs which are nearly scalped off when someone has removed the background of a photo too fast.

In Photoshop essentially the same is available also for painting. The "Mixer Brush Tool" does at the same time the smudging as in ex.5 and paints some new color.

In real painting the brush often naturally rotates as the stroke direction turns. A curved stroke is very different when the painter does not let the brush to rotate. In Photoshop brush rotation is generally a different action than drawing the stroke. It must be controlled separately.

Finest graphic tablets can rotate the brush as one paints, but the control isnt't natural. At least it's very difficult to see the brush angle before actual painting because the control is the pressure or the tilting angle of the pen.

Painting simulator programs rotate the brush automatically if it's not especially prohibited for ex. to get calligaraphy like results. Also they try to keep the brush texture visible. The following image is a screenshot of random strokes in a low cost painting simulator. The brown strokes are simulated watercolours.

Conclusion: It's very obvious that anyone who really can paint and still want to do it in PC, should seriously consider to use a painting simulator as one of his workbenches. The result is easily moved to other graphics programs for editing and adding non-painted elements.

Not the answer you're looking for? Browse other questions tagged adobe-photoshop brush painting digital or ask your own question.

1
A software to replace my pen and paper approach to sketch ideas
2
Gimp - jagged pencil and brush strokes [SOLVED]
1
What's the difference between the Brush and Pencil tools?
1
What is the difference between the pencil tool, the pen tool, and the brush tool in Adobe Illustrator?
0
When brushing with a translucent colour, is there any way to make multiple strokes into one?
1
Adobe Illustrator - Apply brush to single stroke in appearance panel
3
Illustrator - paint/draw inside the drawing created from brush strokes, not shapes
0
New brush strokes keep changing the opacity/color of previous strokes