How to apply colour pattern in pixel art?

In the image below (which I found on the internet), take a look at the different patterns that are most visible in the gradating colours of the sky and the buildings: 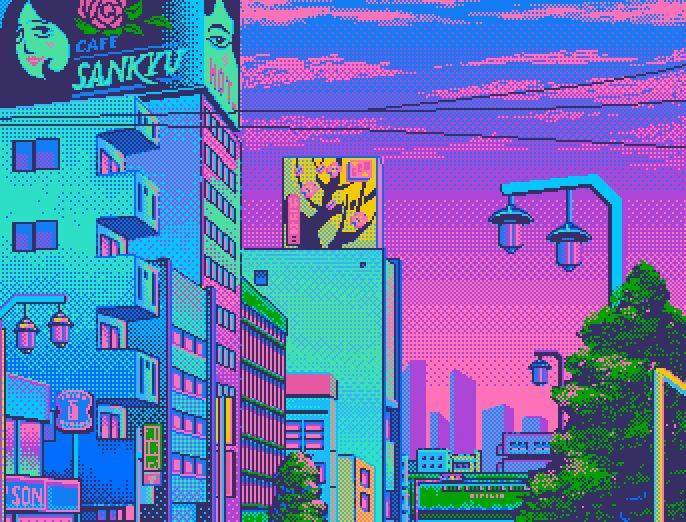 What would be the simplest way to achieve this gradating-patterned-colour effect (by applying it directly and not by using a filter once the image is drawn)?

The name of the thing (=pattern dither) is given in a comment. That is an ancient way to increase the number of available colors. It was used in 1980's when computers had only a few, say 2 to 16, colors at the same time on the screen.

In Photoshop: If you have gradients or blurs which require plenty of colors and you change the color mode of the image from RGB to indexed, Photoshop offers at first pattern dithering of the missing colors. In the following example there is a gradient which naturally doesn't fit to the standard web color collection: 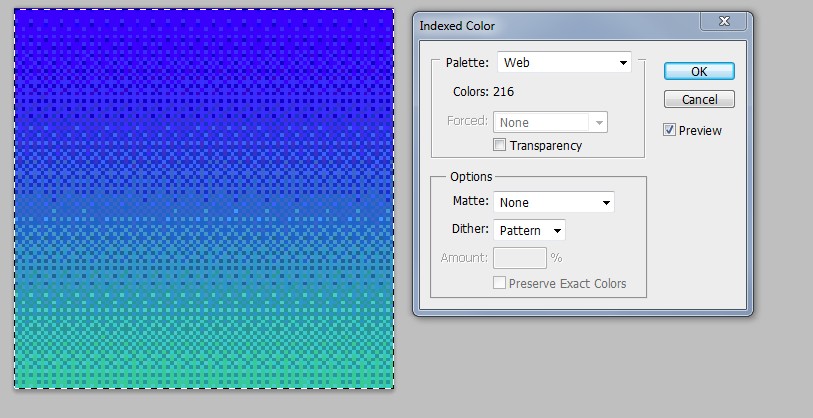 But that's processing a ready image. If you want to easily use dithering patterns as you paint, you must create the patterns to the pattern collection and paint with the pattern stamp tool.

As well you can have prepared dither patterns as layers or large enough zones at the edges of your image. Then you can paint by cloning a pattern.

To test fast can you paint with dither patterns, goto MS Paint (=Windows accessory). If you select there the image mode (=image properties) Black and White, the content of the color palette changes to dither patterns. Making a new color creates a new dither pattern according the luminosity. The pen inserts the selected dither pattern instead of a color. Unfortunately a pre-made color image cannot be dithered, it becomes black, but new strokes are dithered.

The following example is a screenshot from MS Paint. A few random strokes were drawn: 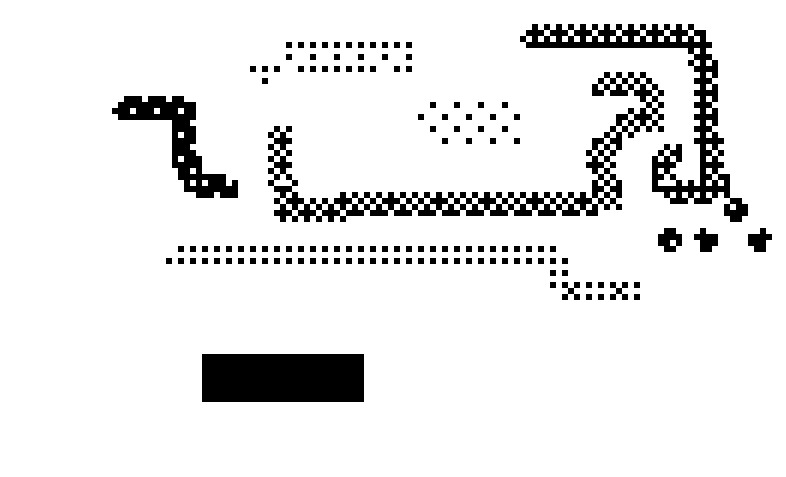 If we remove word "easily" and go in the hard way, you can create the dither patterns like a hardcore pixel artists do - pixel by pixel as you draw with the one pixel wide pencil tool.

Not the answer you're looking for? Browse other questions tagged patterns pixel-art or ask your own question.

3
How can I convert to seamless pattern in Illustrator?
0
Pixel Art: Can't create “hero walking” animation
1
Enlarge a Pixel Art image with Pixen
0
Pixel Art in Gimp
6
Pixel art Randomness
2
Pixel Art and Tracing
8
How to create metalic reflection effect in pixel art?
17
Can I have layers with different pixel resolution in Photoshop?
2
How do I move a pattern swatch once I've applied it to a shape?
0
Pixel Art - Very beginner help guides (Intermediate-Expert computer user, rookie artist)