How would you recreate this rough brush style?

I'm still learning and getting used to brushes and stumbled upon this deadpool design. I really like the style so I'm currently trying to recreate it to learn from the process. 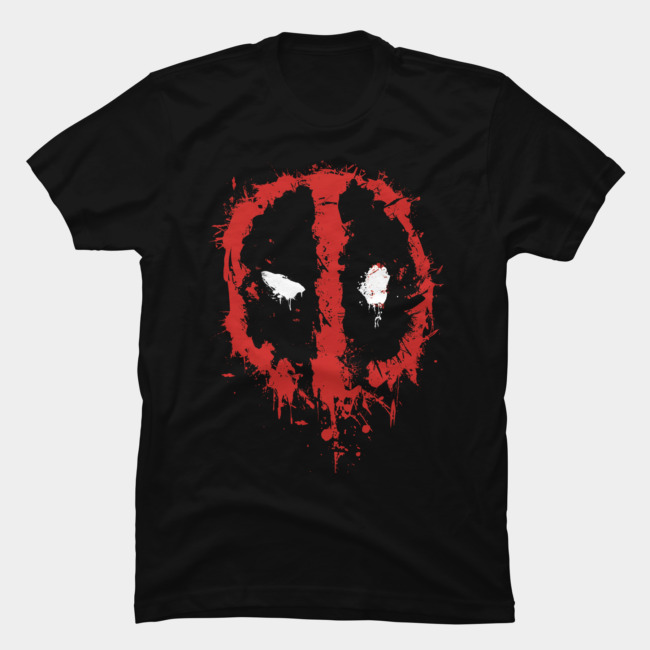 I tried it with different splatter/splash brush styles, even tried to create some scatter brushes (if they are called this) but never quite getting close to this style.

So my questions to you, if you would recreate this style:

Sorry for the beginner question, I'm having trouble finding tutorials for this topic.

That's not a brush. It's a complex non-repeating pattern along the wanted outline. It can be a real painting which is photographed and colored. I can easily believe just this to be done.

If it's created in PC, it can have been painted at first with solid line which is made ragged. The ragging needs some idea of the wanted result. I show only a way to get easily something random, but rich enough. This is a raster image in Photoshop.

Have a solid thick black line on white (a single layer image, no separate background). In practice this shouldn't be straight, but the wanted shape curve.

Take some present scatter brush and paint black and white over and around the black line:

Using the smudge tool with some multi-dot brush push and pull the original straight edges invisible. You can also paint some spatters. They seem to be essential in your example. Finally add very slight gaussian blur:

Goto Image > Adjust > Treshold and adjust the treshold of black and white for good effect:

You may not want as many or as big holes. Copy pieces from elsewhere to fill the exessive holes or make them smaller. Remove white with magic wand and pressing DEL. Then you can give to it any color with Image > Adjustment > Hue/Saturation > Colorize

My pattern unfortunately is only a straight line which has artistic value = zero. But it can be easily used in illustrator, Inkscape, Affinity designer etc... as an image pattern brush or a shape which is bended along a curve. As a brush it can be used for painting:

Just in this case the pattern was traced in Inkscape (a 3 second job) and copied to the clipboard. Then a shape was drawn with the freeform pen. The pen was set into mode "bend from clipboard"

Not the answer you're looking for? Browse other questions tagged brush or ask your own question.

4
Recreating pencil hatching in Illustrator
2
Why is the paint brush painting in a particular layer style?
4
How to Krita - Creating user defined pixel brushes to match Ctrl+Paint
0
Is there a way to 'fill' an incomplete sketch
5
Pencil effect in Photoshop
0
Can't create 1 pixel brush in Photoshop
1
How to slide a pattern brush along a path?
0
How to make a brush like this one?
0
Recreate this Dry Acrylic brush from Corel Painter in Photoshop