I am trying to make something inspired by the look of Ludwig Hohlwein's posters. 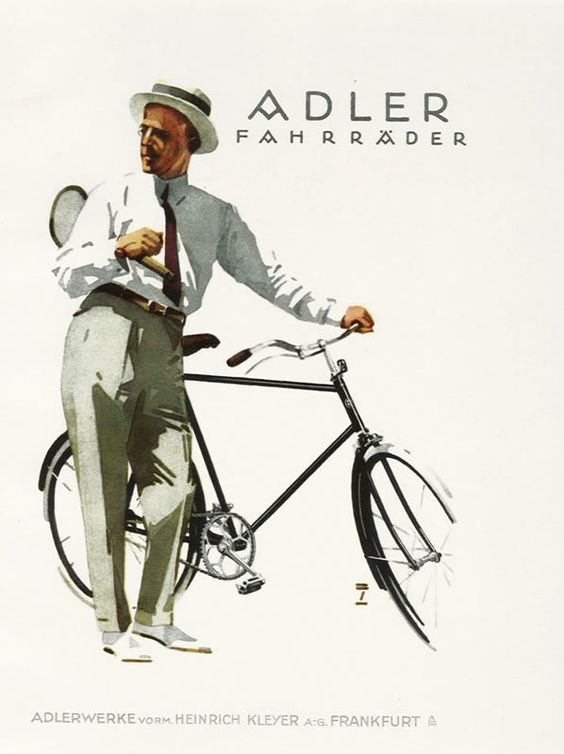 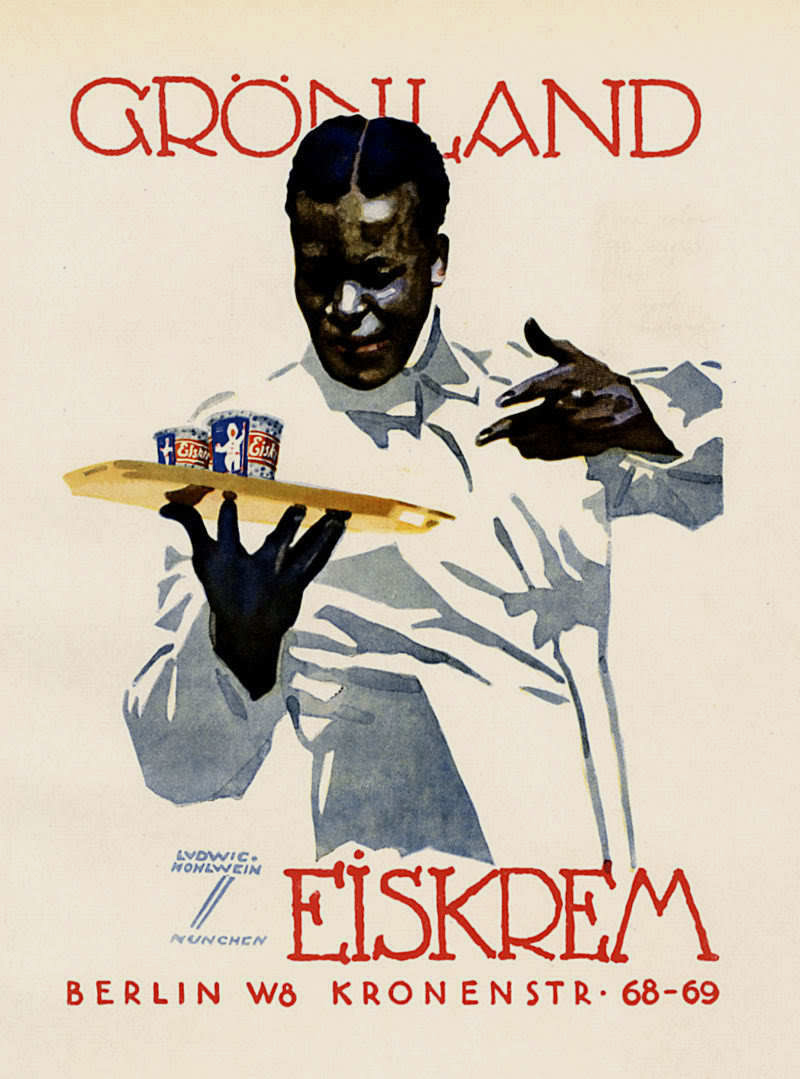 It appears his work primarily involved watercolor painting with different drying times in order to achieve these characteristic modulations of shading.

What techniques could I use to imitate this style (in particular, the flat-colored shadings) starting with a photograph? I am interested in the image manipulation process (preferably using Photoshop and/or Illustrator) as well as the choice of a suited photograph (e.g. the lighting).

Although there is no substitute for a real watercolour illustration, it is possible to get a similar look, or as you say, à la Ludwig Hohlwein.

Clearly the choice of photograph will play it's part. Something with defined shadows and highlights, costume from that era, a background which can be easily removed, etc.

Here I used a combination of an image with the background removed, to which I applied Photoshop's Cutout filter, then I found a textured background, clipped the artwork to the texture layer, and set the layer blending mode to Colour Burn. You'll need to click on the image below to see it in detail. 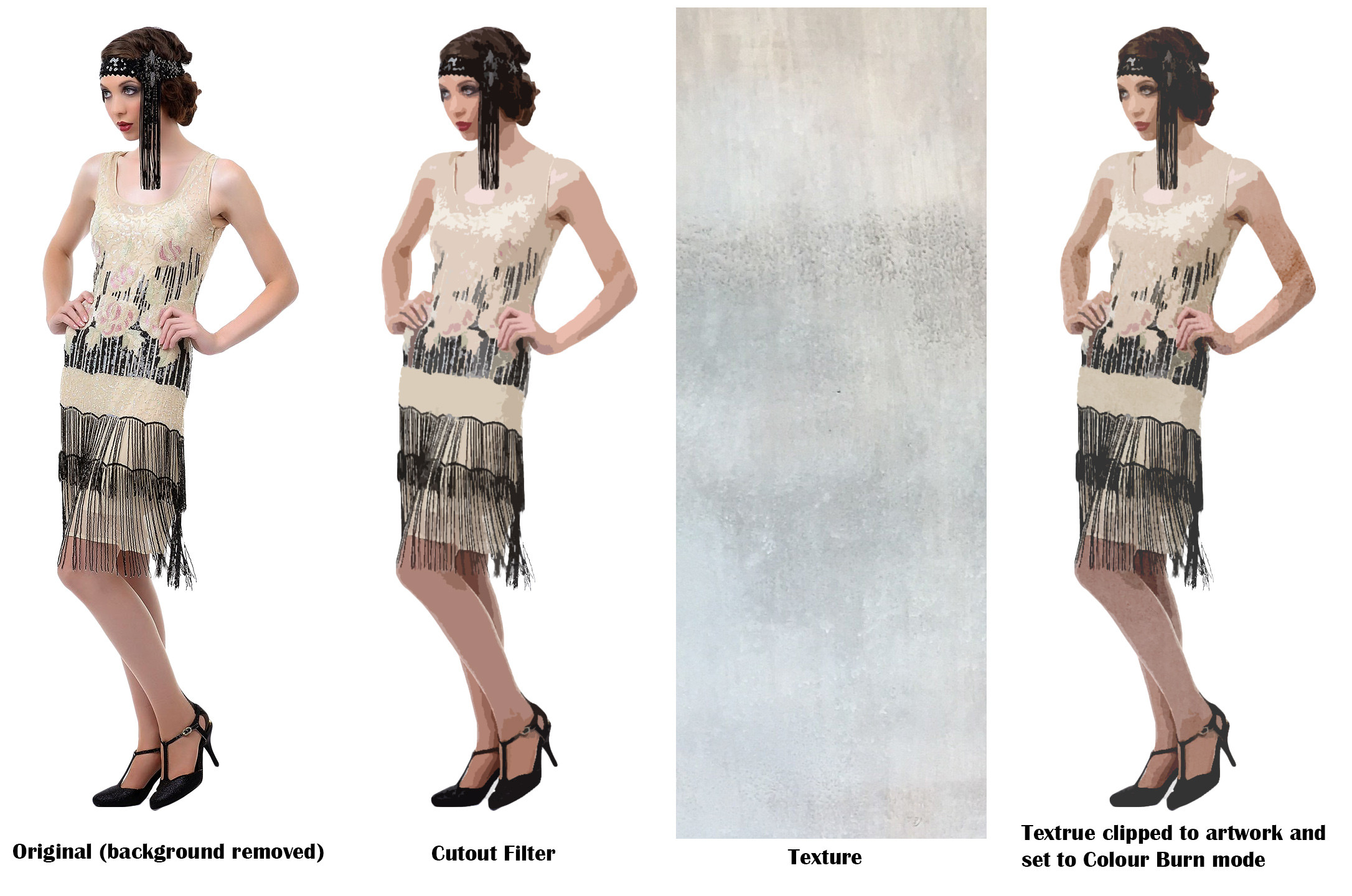 I also tweaked the image a bit by adding a hue-stauration adjustment layer. Here you can see the arrangement of all the layers. 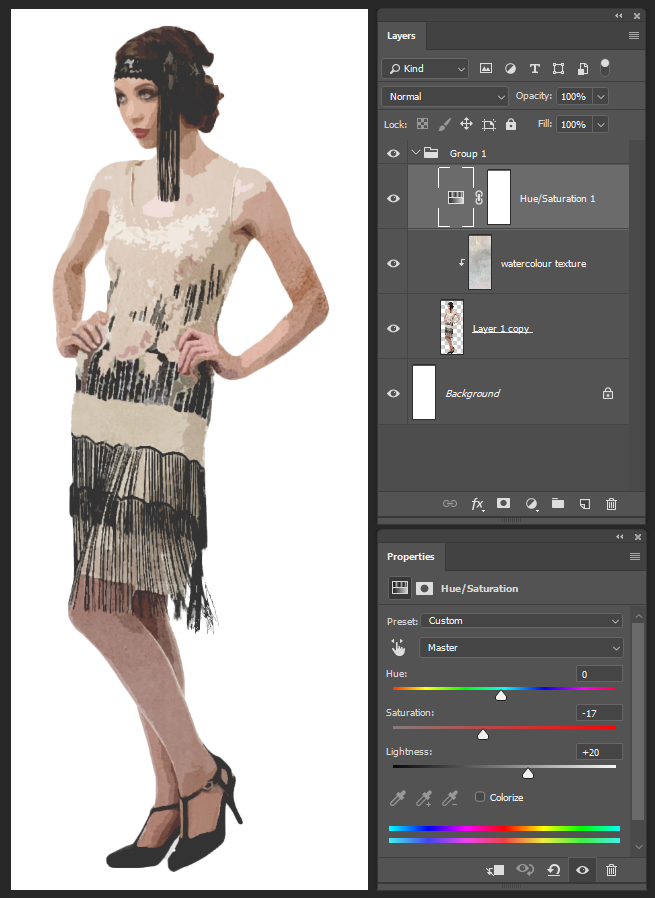 In 99.9% of the use cases, there is no simple answer to "how can I make a photo look like this illustration/painting style." And in fact, for most styles it would entail many various techniques to get even remotely close to an illustrative style. There are many things which take half a second with an hand, brush, and paint but can take much, much longer to create digitally. Sure, it may be possible to get close to a single brush appearance, or a single color appearance, but as a whole, you'd need a manual or book for each and every photograph you want to use.

You would be better served by determining what techniques you feel comprise the style, then try and replicate those techniques individually digitally. Ultimately combining several techniques for a final image. Otherwise, what you are asking is for someone else to do all that work and post a description of how to recreate every possible technique and variation... which ultimately won't be correct for every photo you may want to use.

Style is often created due to the artist's use of brush/pen pressure, direction of painting, pigment, medium texture/grain, and "happy accidents". I mean one can not accurately predict how painting over one area may alter the paint under that area. Often the results are anticipated, but ultimately random in nature within a given spectrum. This is especially true for watercolor or medium that are semi-opaque in nature.

In order to try and replicate an illustrative style within a photograph one would need to be detailed, planned, and meticulous with every single aspect of the photograph. And the photograph itself would play a huge role in the final result.

There's nothing which is going to work by running a few various filters or effects on an photograph and mimic an illustrative style in most instances. If all styles were boiled down to a series of filter steps, then there would be no need for any artist.

So, you need to experiment and determine which areas comprise the style you are seeking, then search for methods to recreate those aspects. For example, grain....

But as you can see reviewing that, it's not an easy, one step action in most instances. So one would need to be methodical on how it's used on a photograph - extracting portions, creating the visual effect, then extracting other portions, etc.

Face it, if all art were merely boiled down to a series of steps.. there would be no value in any art anywhere. You are basically asking.. "How can I devalue this artist's style/technique so much so that it can be recreated by anyone with software." That's often not easily achieved. Actually it's almost never achieved when comparing actual illustrations/paintings and photograph manipulations.

Your time would be better spent determining your own steps and procedures and creating your own digital style which may be merely influenced by an artist but doesn't try and mimic that artist directly.

Keep in mind nothing automated will be as good as the manual way.

I know this is a Photoshop question but here's an Illustrator technique you can apply since nobody else has offered it.

In Illustrator you can define your own palette and then image trace it based on that limited palette. Choose a few dark and light colors from the image. You may have to duplicate and manually adjust them to your liking.

Its important to use a background that is white (here's where you use Photoshop) and you may still need to do some manual tweaking, but recoloring will now be much easier in Illustrator compared to Photoshop. You will have a lot more control this way.

Here's a really quick and dirty example. It's not very good but you can see how it could work. 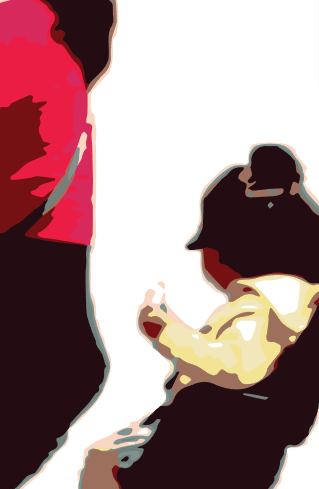 I think the most important is the photo. It must have confident people doing and having something which fits well into a poster in the era when L.Hohlwein was productive.

Converting the photo to remotely resemble L.H's painting is possible as already is shown in other answers. I only have a little different method for the conversion. I think it gives more control.

My photo isn't from the era when L.H. made posters and it's taken with a cheap camera with flash, but we use it anyway. The background is removed: 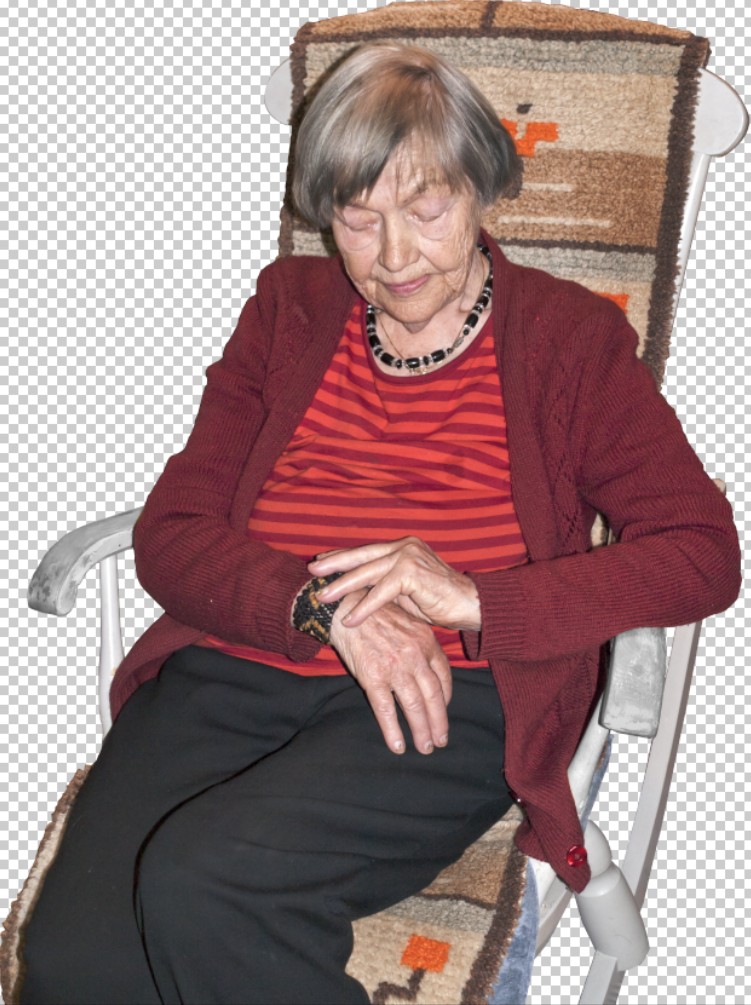 The method shortly: The photo was copied to Inkscape. It was vectorized (Path > Trace Bitmap) to 8 greyshades. Inkscape has a handy tracing mode which performs BW tracing with several different tresholds, colors the results to used treshold greyshades and pile them darkest on top and lightest to bottom.

The tracing result resembles a posterized BW image, but the curves are by default radically smoothed.

The original photo was stacked on top with blending mode = color: 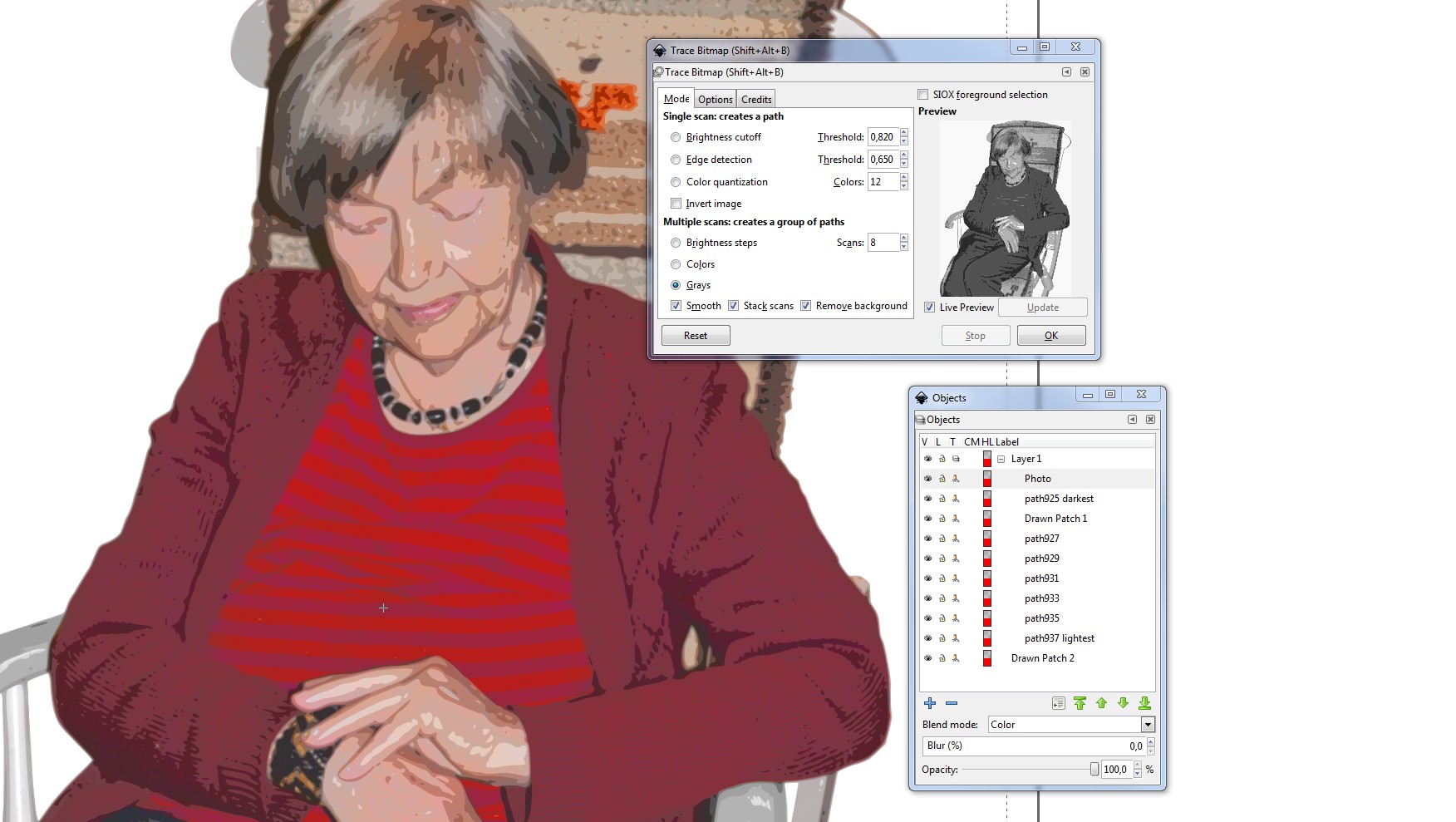 One can say "that's not more than applying the Cutout filter in Photoshop, only more complex!" Not exactly, because

Inkscape isn't a good place to add the painting texture and tweaking colors & contrast altough it's possible. At least I feel better if I can do them in Photoshop, because Inkscape gets sluggish with high resolution raster images. So, the Image was exported as PNG and opened in Photoshop. It got layer name = Inkscape PNG.

In Photoshop was added 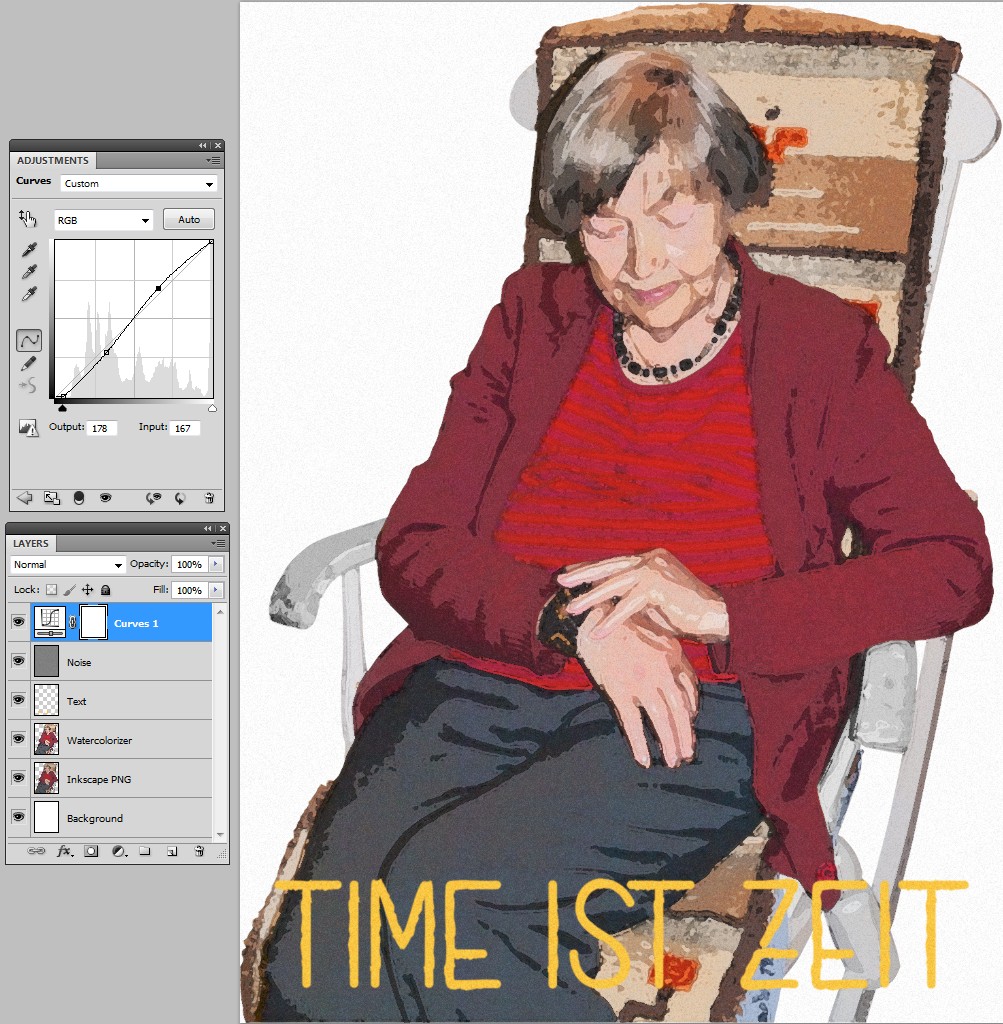 The text also needs attention. It must resemble manual lettering. Just in this case a narrow, nearly single stroke font was used. It was mangled in illustrator to not surgically perfect. (=rasterized, traced to strokes, the strokes got custom art brush, the letters were placed manually)

Not the answer you're looking for? Browse other questions tagged adobe-photoshop adobe-illustrator photography or ask your own question.

23
How do I get this uneven airbrush effect similar to old art deco posters?

2
Hybrid photograph video
1
Achieve this effect: Glowing outline of a photograph
0
Portrait Photograph, How do I get this
1
2D dimensions from photograph
2
How to create or take a large photograph for displays? Is it worth it?
2
Large Format Photograph Printing
1
Remove dust from photo
2
How can I achieve the dark tones in this photograph?