Guide to typsetting code for non-programmers

I authored a scientific paper containing code and recently received the proofs, i.e., what the journal’s typesetters created from my manuscript. The result was not acceptable: The indenting is inconsistent; there is a full stop at the end of each code block; quotation marks have been destroyed, etc. Note that all the errors were not specific to the programming language I used.

Now, I can see why somebody who has no programming experience and no external resources would make such mistakes, but in times of the Internet nobody should not be without external resources. Thus, I consulted my favourite search engine to search for something to suggest and found … nothing. There are a lot of guides for programmers how to beautifully typeset code in LaTeX or similar, which is all nice and proper, but this obviously not made for the typesetter who has to typeset somebody else’s code.

I am looking for a resource that:

Maybe the real point is that code should not really be typeset the way people understand typesetting. So when putting code into a document it should be put there verbatim, as in all spaces, tabs, special or not special characters and line breaks intact.

Code is not body text, it does not follow any typographic conventions. Ask yourself would you typeset text in a illustration?

If you are an expert

If you are an expert and you know the language in question then following applies.

Note: Do not guess or infer, read what was said. Lots of languages look the same and the code may be some pseudo language that looks like real code. Then you can:

If you are a domain expert. As in know the language and library and understand the code in question:

But then you knew all of this, you were an expert after all. Better let the author edit the code.

Some programming languages and use cases may benefit from line numbers. Be careful here though, since this is a faux pas in some languages.

Be aware that no matter what you do you may in fact be up against impossible technical hurdles. Code should not really be typeset it should just be unformatted text. This leads to surprising problems.

For example: Languages like Python can not be handled by many PDF viewers, like Adobe Acrobat. If you paste the code out of the PDF file the editor decides not to include the preceding space when copy pasting. This destroys the ability to paste code from PDF to editor. There is really no good way to handle this!

The answer of course may depend on many factors, but if we start with correct, good formatted plain text code, then one can more or less generalize things here.

The initial ‘formatting’ in the source text will be: newline, space and tab characters. Note that the new line and manual line break (as in DTP software) are not the same thing, and vice-versa, some rare languages may allow other formatting characters, although I've never heard of such.

Comments are not executable part of code, so those may be reformatted without much risk, if one knows if it is really a comment. So first thing to look at is how comments are tagged.

Some basics about initial plaintext formatting is good to know. E.g., for Python, there is the PEP8 style guide. While made for Python, this formatting guide can be used as a reference for major languages such as C/C++ and Java. Looking into various example projects can help when in doubt.

Thus, the first principle would be: Don’t change the source text. I would go through a checklist - make sure that:

Actually if the original source is properly formatted, there should be no line wrapping at all. If wrapped lines still appear and are unavoidable, then a one-level hanging indent is most common solution (see above linked PEP). If line breaking is necessary – better consult the style guide or the author.

Still some minor ‘white space’ characters may require replacement. Since the source can include tab characters, this means of course that the typesetter must ensure that all tabs in the beginning of each line are consistent, i.e. nested indentations are preserved visually and every next level of indentation is of same width (ca. four x widths per one level of indentation).

Ideally, the indentations which were made with space characters or mixed spaces and tabs should be replaced with tabulation (or with what the DTP software can do better for nested indentations), so, if needed, adjusting the indentations may be easier.
Of course one may leave spaces, but it may be harder to manage their width when changing the font and harder to align inner-line indentations like in table columns.

Note that if the source is formatted with spaces intentionally and was intended to be read in monospaced font only, (for example ASCII-diagrams or ASCII-art) one should preserve the spaces totally unchanged, but this decision should be made from the beginning. "Courier New" font is most common for this case. Still if not really needed, I advise against monospaced, because less and less new people choose monospaced for coding today, and in case of proofreading, proportional fonts will give better reading experience.

I think here one can draw a line, and if the above is done, then there is 99% probability that everything should be fine, at least for a plain single-font code block without colors.

Further, the look can be significantly improved by using syntax highlighting.

The most important question is, whether the layout maker have tools that can represent the code in a readable form. Fortunately, there are a lot of free tools for code editing, most prominent (for Windows) are: Notepad++, VSCode, Visual Studio. But be aware of possible implicit auto-convertions of tabs to spaces though.

In Notepad++ there is an option to export the code as RTF, which will preserve all formatting and syntax highlighting of the source.

If the layout does not require change of the text flow in code presentation, one may directly use images (screenshots) – it is not so flexible as text, but will preserve 100% formatting and line numbering, and can save a lot of time. E.g. line numbers can be tricky to preserve in text form. Also exporting to PDF is a good alternative – but not all DTP software can embed PDFs and some formatting can be lost when printing to PDF.

For example, my setup for Python code in Notepad++ look like this: 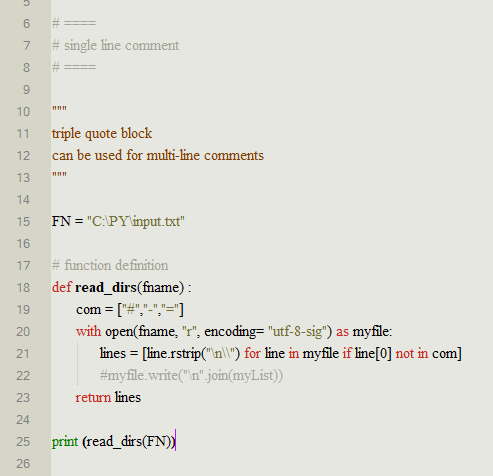 This is just to illustrate, that one can directly use screenshots and that may actually be the easiest method. There are various tools that can help with screen capturing – one may need ‘stitching’ the screens for higher resolution images.

The color scheme is of course upon individual, defined in the style configurator of the editor, which is already aware of the supported language, thus making it hard to make false formatting even if one doesn’t know the syntax. Here general typography rules should work: not too many colors, consistent fonts, indentations, comfortable line spacing.

In HTML, there is a tagset <code>...</code> that tells the reader/interpreter to treat the content absolutely literally. also, <pre>...</pre> does much the same. As someone who often had to typeset formulas, equations, and code for publication, I also advocate the use of IMAGES to do this...make a .gif or .jpg or .png of the problematic item.

Another factor is that code is traditionally rendered in Courier monospace, or other monospaced font, because it semaphores or telegraphs to the reader that it is not body text. I subscribe to this style choice, I think it makes a lot of sense.

Not the answer you're looking for? Browse other questions tagged resource-recommendations typesetting or ask your own question.

27
What are some good resource for programmers to design icons?
10
The selection and use of typefaces for the non-designer
4
Good resource for non-Latin character based fonts?
2
Fonts for styling a blog that includes lots of code samples
7
Proper typesetting guide
6
Is there an order to learning non-technical design theory I should follow?
0
Steps to becoming a Web Designer without writing code?