This is an age old question that litters the internet. I've been working in design for coming on two decades, so am fairly up to speed with color profiling for devices, images and proofing. I've sent countless jobs to many printers and have been happy with color matching in the past.

My greatest weakness until now was using standard, uncalibrated Apple displays. I've recently fixed that issue and am using a fantastic Eizo monitor calibrated with an iDisplay Pro. Which leads me to this:

I'm aware that PDFs displayed on screen - with all the best calibration in the world - should not be held as an accurate example of print colours. PDF viewers are infamous for inaccuracies.

I export the PDF as a PDF:x-1a, which has always been the safest bet for print houses in my experience. I don't need the extra features of later PDF versions and am happy with anything flattened and no transparency. It converts to my CMYK working profile.

The PDF looks very washed out in Preview.app (relative to the active document in InDesign) on my calibrated Eizo and calibrated Apple screen. I don't worry as this has always been my experience. It's a CMYK space being viewing on an RGB monitor and while it could do a lot better at emulating the colors, it's never going to get it perfect.

Just to be certain, having not used this calibrated screen before with InDesign for print output I try a similar experiment with JPEG. I export the page as a jpeg, specifying it uses the working space of Adobe RGB.

To my surprise, the JPEG looks equally washed out. I confirm it's using the embedded Adobe RGB profile and check it in PhotoShop, just incase Preview.app isn't showing it accurately (which it always does for jpegs).

Although my Eizo displays 10bit color and doesn't suffer from the issue of Adobe RGB documents not displaying accurately, I convert the InDesign document to sRGB just to rule out the issue. Exporting as JPEG, I confirm the document is to be converted into working sRGB.

Same as result 2. The jpeg is significantly washed out compared to the colors I was using in the active InDesign Document.

Am I missing something? If my exported jpegs has colours so deviated from my working document, with everything calibrated and profiled, I don't feel I can send my PDFs to print with confidence. Although the project's concern is with PDF color accuracy, the question pertains moreso to JPEG exporting as, unlike PDFs, I trust the color accuracy on my monitor of any images converted through a color-profile-aware pipeline like this (RGB space images exported as an RGB space document with the entire pipeline color-managed).

I've noticed this question was closed due to requiring a 'specific setup, file, or interaction with you or your machine. Questions on this site should be potentially useful to future visitors'

I don't understand the lack of usefulness? Wide-gamut monitors are only going to exponentially increase in use and this is a very pertinent question to them. The lack of people using Adobe RGB as a workspace in InDesign and the relevance of doing so on a wide-gamut monitor is surely a very useful question to have as a resource? There is little to no information about this elsewhere, I googled it extensively before posting here (InDesign usage in regards to wide-gamut displays)

If the closure related to the niche use of a wide-gamut monitor, they already have strong adoption with graphic professionals and are only going to increase until their commonplace. I see no other specifics in my question that's intangible or irrelevant to others? The file being used was irrelevant and the model of my monitor is irrelevant.

I'm almost afraid to answer this after all these words, but here goes...

Maybe you just forget to uncheck Simulate Overprint when exporting the JPEG: 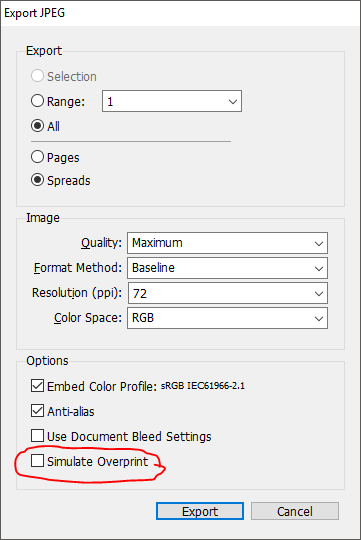 With Simulate Overprint (washed out):

Just a general note to say that Preview.app has its flaws and while it is handy, it is limited. Below is a link to a detailed study that found that only free PDF viewer that could be relied upon in graphic arts is Adode Acrobat Reader.

I think it is a few years old now and some apps might have been updated since then but you can download the PDF Checker they used and see for yourself how your go to PDF Viewer behaves.

There's some theorising and naivety on my part here (as much as I think I'm on top of color management, I occasionally stumble) but some further testing has led me to believe that InDesign 2018 is currently incapable of accurately displaying colors on wide-gamut displays.

I retract this thought and put it down to my lack of being as thorough in the past from never having as accurate a monitor. I accepted that PDF prints wouldn't quite be comparable to what was on my screen so didn't look for accuracy at each step, like I was now.

I was able to get InDesign to natively display colours exactly as both CMYK PDFs and RGB Jpegs displayed them in Acrobat Reader and Photoshop, respectively. My problem was the missing the exact combination of options I need to enable/disable. In particular, I was missing that I needed to both simulate overprint and soft proof at the same time inside InDesign. Sounds obvious, but I overlooked both (a) the relevance of overprint when not consciously overlaying inks. Its simulation affects how single colours lay on white paper and (b) that Acrobat Reader is simulating overprint by default on PDF/X documents, so it was never going to match InDesign unless I ensured both matched.

On top of these, ensure blend modes are appropriate to either CMYK/RGB.

This is all standard stuff for 8bit monitors and I can confirm it works fine with an Eizo wide-gamut display using Adobe RGB working space.

It is very easy to miss an option needing changing if you change an option elsewhere. As @Wolff posted, I would also need to ensure my JPEG export options have overprint-similation on or off to match my intended comparison.

This question was closed and an upvote retracted from one of my other questions the day after I added a comment questioning the knowledge of scope of what graphic design constitutes in academia and the industry today by some moderating a graphic design forum. I'll remain an optimist and assume this is a coincidence.
share | improve this answer | | | | |
edited May 17 '18 at 9:54
answered Apr 8 '18 at 9:25

Not the answer you're looking for? Browse other questions tagged adobe-indesign color-profile color-spaces or ask your own question.

9
Photoshop Color Settings for web design
3
Calibration and Photoshop Color Settings
3
Photoshop: Should I use my monitor's color profile (under proof setup/colors) when designing for desktop?
0
Which RGB profile should be used when exporting a PDF for web?
1
Color profiles on Photoshop CS6 for photography
4
Designing CMYK artwork on sRGB monitor
2
InDesign: TAC of sRGB photos exceeds ink limit - does this cause issues when encapsulated in a PDF-X/3 document for print?
0
RGB color Setting in Illustrator
1
Correcting monitor colors for CYMK printing?