It's an old question, but an important one. Let's see if we can get a good, nuanced, ideally evidence-based answer.

So, old-school wisdom (certainly, how I was taught back in the day) says that serif text improves the readability of long passages of text. The eye passes over the text more easily, there is less "fatigue" on the eye, and reading speed is improved. As I was taught, this is the reason why book typesetters almost always use moderately florid serifs like Garamond. Sans-serifs, according to traditional wisdom, are better for legibility - the letters are simpler, less room for error - and so are better suited for short text, like road signs.

Within the last decade or so - certainly since reading on screens became commonplace - I've seen an increasingly common viewpoint that this is an outdated myth - that actually, serifs are faster for reading long text for no reason other than that we are historically accustomed to reading long passages of serif text, and that long passages of well typeset, well chosen sans can be just as good for readability and fast reading, as people become accustomed to it.

There's also a third viewpoint I'm aware of, which says that the second viewpoint is a myth that comes from the fact that serif fonts tend not to reduce well on pixel screens, making sans type the better (least worst) choice for long passages of on-screen text or poorly-printed reproductions, but serifs still the best for long passages of printed type. Hence the popularity of websites with sans body text and serif headers, and of printed materials with serif body text and sans headers. Essentially, it characterises the arguments for the second viewpoint as merely pointing out that good (well produced) sans type is better than bad serif type, and maintains that, for extended reading, all other things being equal, good serif type is better than good sans type.

And finally, there's a fourth viewpoint that it doesn't matter anyway - that there are no differences between serifs in general and sans in general that are not merely artefacts of the differences between the example fonts and typesetting used in any particular test or comparison. There's certainly a case to be made for this in the context of legibility, but I've not seen anything convincing on this for readability.

All other things being equal, do serifs on a typeface genuinely make lengthy body text easier (faster and less effortful) to read?

Readability (as defined by the speed of error-free reading) is something objective that can be, and has been, measured. This is a factual question. Can we give it a solid, rounded, nuanced factual answer?

A couple of asides relating to common arguments I've seen: 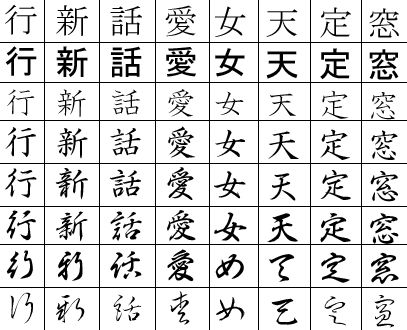 Finally, a related topic has been touched on over at the UX site, and second answer has many interesting references, but that question has no clear focus between readability and legibility, and so doesn't give a definitive answer on the readability front.

Summed up into a couple of points, here are my thoughts on the subject.

Serif type pre-dates sans-serif and the serifs are originally imitations of chiseled type in stone which then went on to be used just for aesthetic reasons. It was not like there was both serif and sans-serif and one was "chosen" over the other - it would be hundreds of years later before the first sans-serif appeared, and even then it was scorned a little bit at first. So, obviously, if someone were to claim that serifs were "invented" to ease readability, implying that before that all text was sans-serif, then they're putting the cart before the horse in terms of their understanding of history.

English is NOT the best-constructed language. It's a mess of etymological influences, irregular verb conjugation, homonyms, and there are just exceptions everywhere. I'm sure people could successfully make the case that Spanish or Esperanto or whatever is not only a better candidate for lingua franca status because of the ability to learn it quickly and perhaps it could be more descriptive in nature.

But at the end of the day, winning that argument and printing a piece in Esperanto doesn't mean a thing if your audience is a group of Americans. I've heard before that "we read best what we know best," and I think that's true of typography. I bet more than a few Germans were uncomfortable with serifs when they first came out, having been familiar with reading blackletter.

There are a lot of things that improve readability (leading, kerning, stroke contrast, type contrast to page background, weight, margin size, column width) without even getting into the serif/sans serif debate. The debate has the most merit on screen, where I think that limited resolutions have favored sans-serif for technical reasons.

I welcome the debate, but when I choose between the two it's typically based on whether I want a traditional or modern "feel," and whether or not the target audience would be familiar (though I think that with the popularity of sans serif on the screen and serif in print evens this argument out, particularly among the younger demographic).

Much great discussion has taken place around this topic at Typophile.com ...

This one gets pretty deep into the real mechanics of the issue. In a response to multiple preceding discussions, Peter Enneson starts off an intellectual's debate on the issue.

In perceptual processing terms I see the reader's ability as primarily twofold. 1) an ability to see many (even eccentric) varieties of a letter as a given letter (for example a Raffia A as an a); 2) an ability to visually integrate ensembles of orthographically regular clusters of stimulus units (letters on a page) into familiar, object-like, perceptually molar, sense units. Both involve perceptual learning, and the second ability is underdeveloped in people with dislexia.

A short discussion between two important members from the early days of Typophile (the golden years, if you will). It centers on the coining of the word 'bouma' to describe word shapes and their place in reading mechanics/perception. It's definitely academic but there are some great takeaways on the micro-considerations of type design and selection.

What makes an italic easier to read?

Fatastic historical samples and analysis on the lost art of the italic.

Help on dissertation, Legibility versus readability

Proper definitions of Readability and Legibility

will the serif ever die out in the future?

Studies of readability and legibility are few and far between and mostly inconclusive in deciding broad questions like this.

The only consistent result is that people tend to read best what they read most.

The big catch is that 'all things being equal' is really hard to study. There are very few typefaces one could call 'being equal' aside from having a sans vs. serif version and even of those, one is really testing the legibility of that particular face rather than the serifs themselves.

I think we like to think of typography as being a purely scientific field of study but it's mostly art. ;)

I notice it myself, if there isn't enough line spacing, then I can read serif faster. I respond to the visual hints.

Related, which might shed evidence on the subject, is the publication of fonts directed at dyslexics, which use weight in the letters to further hint at their form. To me that says that extra visual information is processed and can increase readability.

My two cents, I really like this article on kadavy.net. It says, basically, serifs on paper and sans-serif on screens. Serifs might look muddled on screens with low DPI counts, because of the pixel raster. Because of this reason it is also better to use letters with a high x-height on screens.

Personally, I like the distinction for paper and computer screens, but that could be because I'm so used to it.

The "studies" on Serif v Sans Serif ignore the most important mass of evidence that serifed faces are FAR superior in printed applications.

Mail order advertisers constantly track different aspects of advertisements and are able to do exact "split run" testing for millions of copies of newspapers or magazines. Mailorder ads have traditionally been very heavy on text and the text contains the sales pitch leading to purchase of the product. Among the tests that have done are numerous perfectly controlled tests of serifed type v sans serif. In these controlled split run tests, the serif faces ALWAYS pulled more orders than the exact same words in sans serif. Always. Not just in the USA but in Britain and Europe as well, despite the evidence-free popularity of sans serif in those places. The obvious conclusion, proven over many millions of copies, is that serifed faces are more readable than sans. This conclusion was so well-documented repeatedly, that almost no text-heavy mailorder ads, or any ads which measure results, are printed in sans serif. Indeed, a text-heavy ad in a sans text is the mark of an incompetent.

Is it surprising that legalese, designed to be hard to read, is invariably sans serif?

The superiority of serifed text faces has been so well-proven in print applications for over a century that someone who argues otherwise is either an incompetent or a liar.

Some thoughts, In my view (pardon the pun), I think your article would have been easier to read, e.g. I could have speed read or "skimmed" it, much faster had it been in a serif font. Btw, Georgia, as I understand is "the" best screen serif font according to some, it is my choice for word processing in my workplace on LED screens (non-retina display).

As I looked at the paragraphs, each word appeared to be block-ish as does all caps and we all know why that is bad to use, the brain does know shapes of words, not just letter patterns mentioned above, and that is more difficult to discern with sanserif, at least with the font you have on this page. Perhaps wider spaces between lines would have helped.

The point about newer screens is somewhat ironic as this page is still quite narrow although most people now have wider, inexpensive LED screens with better resolution than the old tube models. The argument that sanserif fonts work better on screens would be a good one if we all used retina displays, but that will be a long way off in the workplace and many households.

Not the answer you're looking for? Browse other questions tagged fonts typography typefaces research or ask your own question.

1
Sans-serif fonts for body text
21
How are Serif and Sans-serif fonts different, and when should one use one over the other?
19
How do I figure out the right size font / text for a given read distance?
20
Font overload in academic documents
9
What fonts are ideal for E-ink displays?
0
Is there a ressource that evaluates the quality of webfonts?
0
Recommended font size and font family for website content

5
Should one mix serif and sans-serif type fonts on the same Webpage, for plain text elements (not headlines)?
5
Web font that supports some basic music symbols
7
Freely available old-style serif fonts with multiple weights
3
CharterBT/CMSans complementary monospaced font
4
Best practice to creating distorted text?
9
What are good general typeface principles based on target audience age?
2
Font pairing for Caslon
1
Which pairing works best for these sans serifs?
82
What is so good about Helvetica?
7
What are fonts halfway between serif and sans-serif called?