Reversing the stacking order of live text in Illustrator

I'm working on a graphic where I want to overlap the type. I created a text box, typed out a big old heavy font. Alternated Letter colors, put a stroke on the whole thing then pulled in the kerning like crazy. It is overlapping, but my question is can I switch the overlap order so instead of the first letter being in the back it is in the front? I know that this is possible when you are using the blend tool but wanted to know if anyone knew how to do this using live text.

I know that I can outline it and do this manually, but I wanted to see if I could do it with live text.

Sure, it's possible with a bit of trickery...

Set the Character Rotation of the text to 180 degrees (so each character is upside-down)...

Then rotate the whole text object 180 degrees to correct the character orientation (this will switch the stacking order in the process)...

Of course your text is now written backwards so you'll need to retype it backwards (the following image actually says "PALREVO"), but it's still live type.

(...All of that said, this is just an awkward hack and there's no real way to control the stacking order of type in a single text object. It'd probably be easier to just outline your type or use separate text objects.)

To use live type, you would need each glyph to be a separate type object. (In which case, you may as well create outlines.)

You can't control the "stacking" in one single live type string.

It's possible if the live text is defined to be a symbol. As well it can be a separate file and linked to your document.

To show an example I wrote one four letter text, dragged it into the Symbols list, made 4 instances and with clipping masks each instance had different letter visible.

The placements, sizes and arrangement order can be anything. Coloring was made in the original text.

Text=OVER, but the original version was double clicked. Illustrator asks if I'm going to edit it 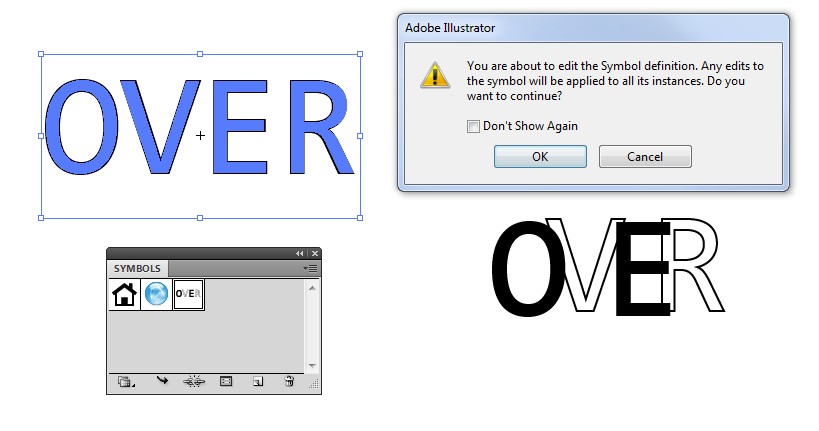 Text is retyped, it's now =UBER

The original text should have strictly constant character width and spacing, because the masks wouldn't fit otherwise.

I must admit I cannot see, where all caused complexity would be acceptable.

A script programmer obviously could make it internally even more complex, but easier to use.

Not the answer you're looking for? Browse other questions tagged adobe-illustrator text typography typesetting or ask your own question.

2
How to accomodate different text lengths in translated web content?
6
What is the best way to make text fit inside a circular shape?
2
Stretching only part of the letter
2
Type specimen generator
2
Photoshop - How to Create Overlapping Stroke on Font?
0
How to ensure the whole path has same width
0
Apply gradient to individual letters
1
Indesign - Need to split between only 2 text boxes
0
Filling text with flag colors
4
Illustrator - how to create area with evenly shaped bumpy outline