I'd like to avoid Actions or Smart Objects or anything that involves manual clicking. I'd like to be able to simply paint any color on some particular layer, and the layers above it would automatically convert it its oppositely-saturated or oppositely-brightened color.

I figured I'd be able to do this with Adjustment Layers, but haven't found a way. I also played around with Layer Styles (using Color Overlays of Difference, Exlusion, etc.) but also couldn't find a way (perhaps with clever use of "Blend if"?)

Any ideas on how I could do this? Thanks in advance.

UPDATE: I included a pic to better illustrate what I need 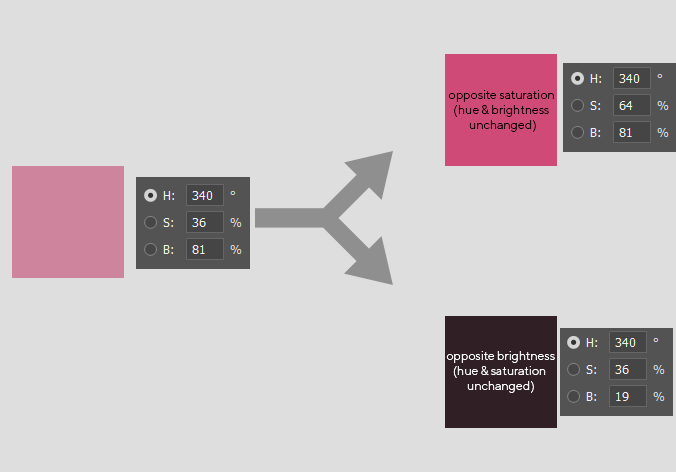 This is the most mind-blowing finding I have made playing with channels!

And here comes a long explanation why.

My first reaction was like the other two posts. Invert the image will invert the values (layer 1), then just re-reverse the hue (layer2, orange elipse) and voila!

The Hue is in fact reversed but not the saturation and brightness. 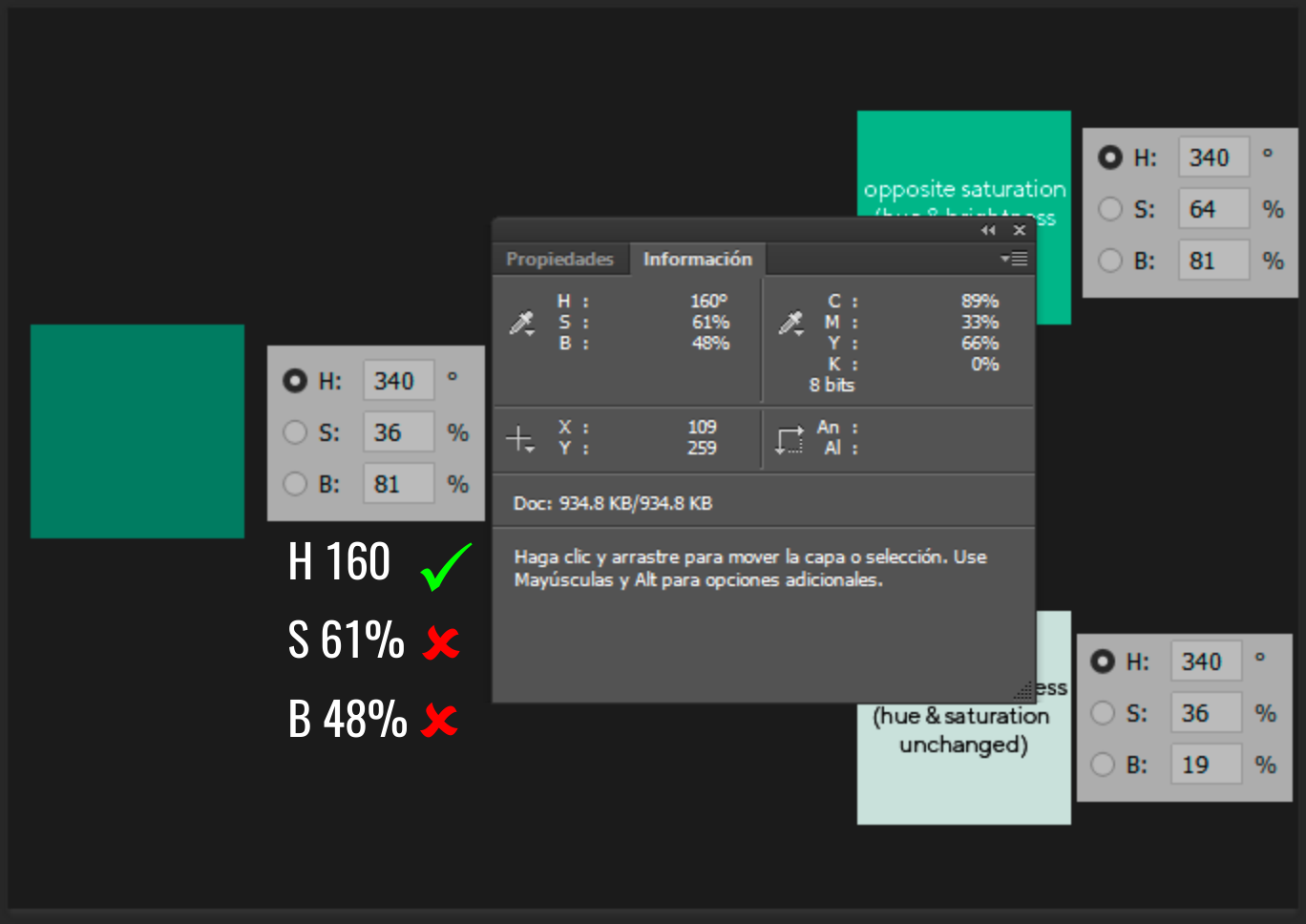 I was wondering why, and I remembered that that is not how those HSB channels work.

When you invert a saturated color, the saturation remains the same. Let's see why.

Here is an almost red color. If we invert the values on an RGB file, the channels are in fact inverted but the overall saturation, which is the difference between the maximum value and the minimum one is, in this case, the same. The same saturation. 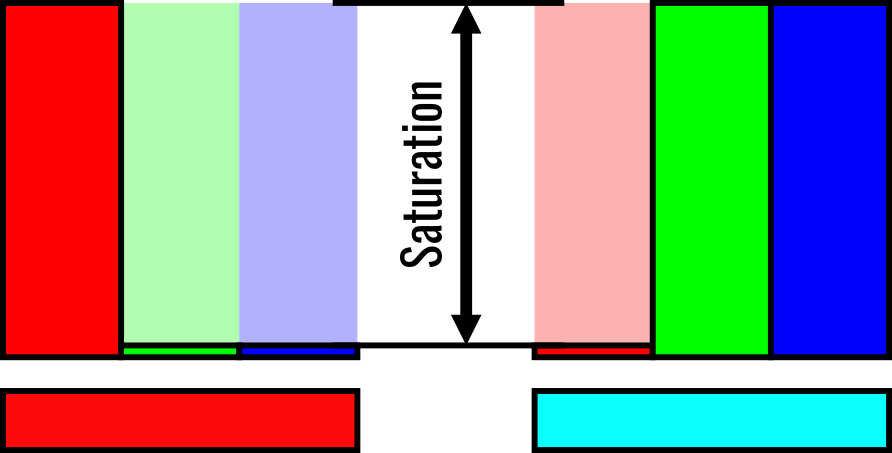 Now I made more complex tests.

Here is a color table with HUE+Saturation circles organized in groups with the exact same brightness.

And here is the separated channels. (Photoshop cannot separate the channels like this, but PhotoPaint can)

The result is clear on each H+S+B Channel and they are as expected.

And now let's just invert the RGB file. The result is obvious on the HUE Channel, but funny things start to appear on the Saturation and Brightness channels. They are simply NOT the opposite of what we got earlier.

Now let's play with the S and B channels... And we are starting to mess things up.

By actually inverting the saturation channel we start to simply loose information.

We told every outer color in circles "You all guys are NOT saturated" so they all turned white or gray.

This is even worst. We are telling all the first circle. "You guys do not have any light. You are all black".

5. Taken to the extreme

Here I am inverting both.

Notice the red dots at the center. We will address that later(1).

As shown a color is dependant on the other values to actually be a color. If you remove for example the Brightness of all colors you simply turn off the lights. By removing saturation you do not only remove saturation, but also Hue.

(1) The explanation about the red is when you remove the color information, removing either the saturation or the brightness, any original value the color had is irrelevant, so the hue is reset to 0, which is the value of the red hue.

You can not by using RGB channels because the 3D geometry of the space is different.

An RGB file which is normally how you work on most digital images is a cube with linear coordinates. But the HSB is a Cone with radial and polar coordinates. And as far as I know, Photoshop cannot work in HSB mode. 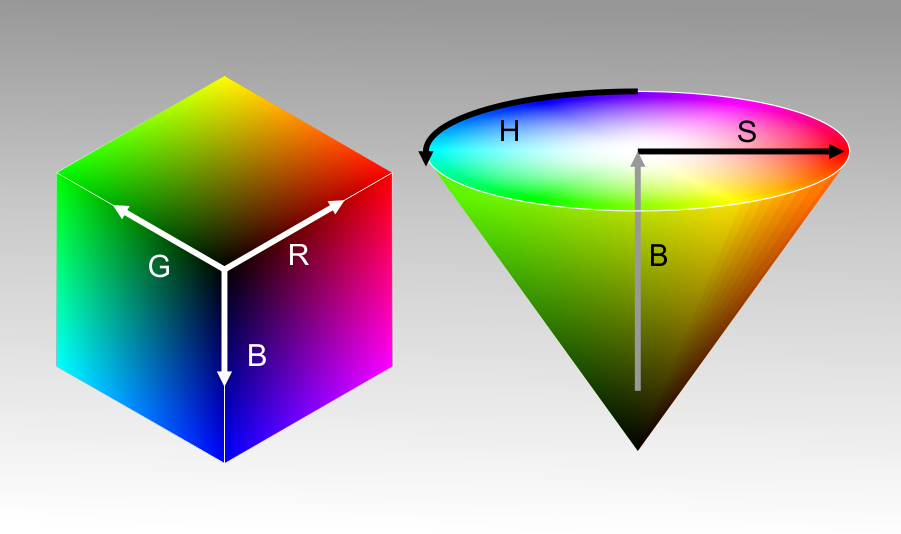 Use PhotoPaint that can work in HSB channels as I have shown here.

Prepare an Exel table that can be used to generate an HTM+CSS file to show you the colors.

You can do this. However I am not sure it fulfills your practical requirements in any sane way.

There is a filter that allows you to split out HSL and HSB channels for manipulation. Its not installed by default on all systems if not you can get it from Adobe.

What you are basically asking is conceptually simple.

Its possible, not somewhat live but not easy by most measures. Not really useful for anything in my opinion but yeah it works.

Not the answer you're looking for? Browse other questions tagged adobe-photoshop color automation or ask your own question.

0
Compute the hue/saturation/lightness shift between 2 colors for paint.net
9
Replace individual colors in multiple layers
8
Why is the opposite of yellow on color wheels sometimes purple and sometimes blue?
2
Is there a term for saturation and brightness moving in opposite directions?
1
Is there a resource that can analyze image files and provide measure of luminence, saturation etc. automatically?
2
Multiple view in Photoshop : different layers visible for live modification (without Smart Objects)
0
How can you use foreground color when using Hue/Saturation (Colorize option)?
3
Should we increase saturation and brightness on CMYK colors?
3
Is the color exactly between two opposite colors always medium gray?