I have a bunch of pie charts and bar charts to make up for a client. They have given me the raw data and they want them made up attractively and easy to understand.

Does this mean I have to work out the divisions and graph it all myself from scratch before I even come to making it more attractive? Is there a quicker way to do this?

Update: To avoid confusion. Basically they're going to be vector graphics, output as EPS files and in illustrator ideally because of it's great vector capability.

Illustrator has a function by which you can enter the values in a spreadsheet format (and I believe you can import or past a comma- or tab-delimited file for ease-of-use) and generate a chart of your choosing on-the-fly. In addition, if you change the values in the spreadsheet, then the chart automatically updates. The whole thing is in vector format and completely customizable. Searching for "illustrator charts" brings up a lot of good tutorials.

I wouldn't recommend using Excel for this because the design choices are limited, and therefore look like an Excel chart, Excel can only output poor quality graphics (as in not print quality and definitely not good vector art).

Uh - what are you using to create the charts?

Most software packages will let you set your colors once you've created the chart. At that point, it's a matter of deciding on a palette. On a pie chart, I prefer to have fairly different colors for each "slice", especially if there are going to be multiple small "slices". For example, it's really hard to tell the difference between some shades of purple and some shades of blue if they're really small. Or, failing that, make sure that your "similar" colors are separated from each other (like the blues in this chart). 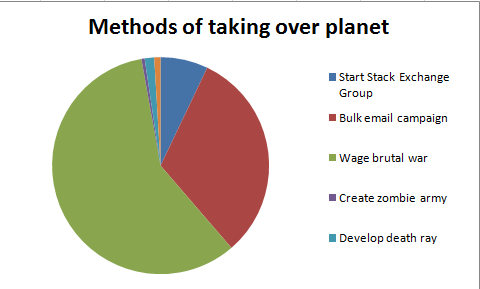 For bar charts, you may be able to get away with a fairly close palette - variations on the same shades of blue, for instance will probably be fine since there is a clear visual separation between the columns: 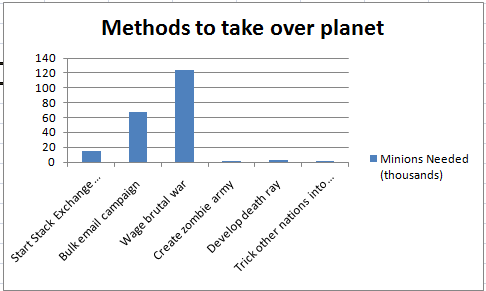 You could, of course, make one bar a completely different color if you're trying to draw the audience's attention to a single talking point ("...and as you can see, it would be much cheaper to raise a zombie army than to have to pay legions of live soldiers wages and benefits...".

One other word of caution: be careful of using patterns on any of these; charts often depend on the human eye to be able to tell the difference between the edges of the various shapes, and a pattern can very easily interfere with this ability. If you're going to use a pattern on a chart make sure it's not distracting.

BTW, I used MS Excel to make these as a quick and dirty set of illustrations. You can double-click on the pieces of the chart to re-assign colors, etc. Clearly, the process is going to be different depending on what you're using to create the charts.

I know what you are asking but you should think about it another way. What makes an attractive chart?

You have been given the raw data, but what does it mean? Pie charts and bar charts add detail to certain types of data and make the meaning of that data clearer but they do the opposite for other types of data. The best charts are High-Definition supergraphics that relay information in a non-distracting way.

Don't do more work than you need to do. Start with the data and parse out what type of data you have and what it is trying to say. Then sketch out some ideas for your infographic on paper. Once you have that in hand, the software you will use to digitize your design will be obvious to you.

Data -> put into Excel -> create chart -> use as visual template to then design a nice looking chart.

Another option is to make your graphs in Excel, then paste them into Illustrator and tidy them up there.

This has advantages over tracing or creating your charts in AI if they're very complex, e.g. a scatter or line chart with hundreds of points, or one that requires trendlines or other

But it can be fiddly - they don't necessarily break apart cleanly.

I'd like to refer to the attractivity part of your question with this gif: 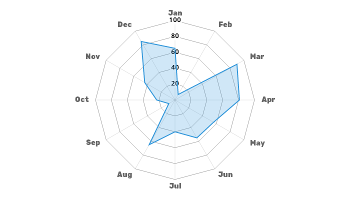 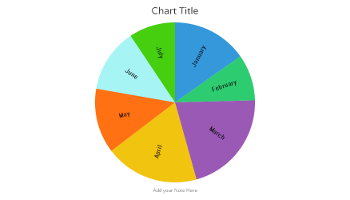