GIMP 2.8.16 - How to create an EXACT path using the 'Selection-to-Path Advanced Settings' dialog?

How can I create an EXACT path from a selection with as FEW anchor points as possible using the 'Selection-to-Path Advanced Settings' dialog (https://docs.gimp.org/en/gimp-selection-dialog.html)?

I've been playing around with the options of this dialog for a while now, but all I can seem to produce is a path that follows my selection closely BUT has anchor points at every little corner of the selection. All these anchor points make it difficult to use the path in the next steps of my work.

How can I get a path that matches my selection precisely WITHOUT all these excessive anchor points? What are the specific settings that I have to use?

Many thanks for your help!

Changing a selection to a path can never be exact. An ordinary selection is made up of pixels, whereas a path is a vector. In converting a raster selection to a vector path, the exactness of a pixel selection will be lost. If there were fewer anchors, then the Path would be even more imprecise. 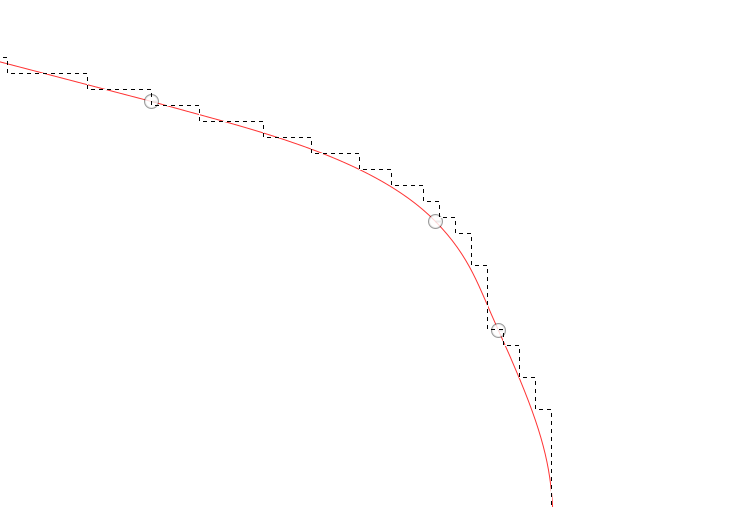 If you want to make more exact Paths, it's better to create them manually with the Paths Tool. Learning how to use the tool is a valuable skill. There are no shortcuts to creating exact paths. This of course goes for all image editing software that has vector capabilities.

If you find yourself using vectors frequently, it might be better to consider using actual vector image editing software, such as Inkscape or Illustrator. With these you can simplify paths to remove excessive anchors.

I think the accuracy also depends on which kind of curve you are fitting, even if it were not pixelated. Curve fitting algorithms use a special curve (called a spline). The curve y = x^4 can never be fit by any finite number of splines.

Not the answer you're looking for? Browse other questions tagged gimp path selections or ask your own question.

0
Selecting between paths in Photoshop
3
Outlining a path looks ugly at the start/end of the path
7
“Select by color” and “draw path from selection” in Inkscape?
0
White line down the center of my image when using reflect
0
Creating a selection from a path with 'holes'
1
Gimp: Draw border around selection using the corresponding colors
1
Deleting Multiple Photoshop CC Work Path Achor Points
3
How to find mid point of a path between two anchor points in Illustrator
1
Joining 2 Paths in Adobe Illustrator