So, I'm Trying to find a way to select areas of images that have similar levels of contrast, but with variations of color. Is there a way through scripting or otherwise in Photoshop to select something as wispy as clouds and extract most of them from the sky? I've played with the lasso longer than any cowboy ever has and I don't believe in magic after I've failed so many times with the wand. I don't see a way to make PS perform as desired (consistent or fast).

Am I missing something or is this genuinely difficult? 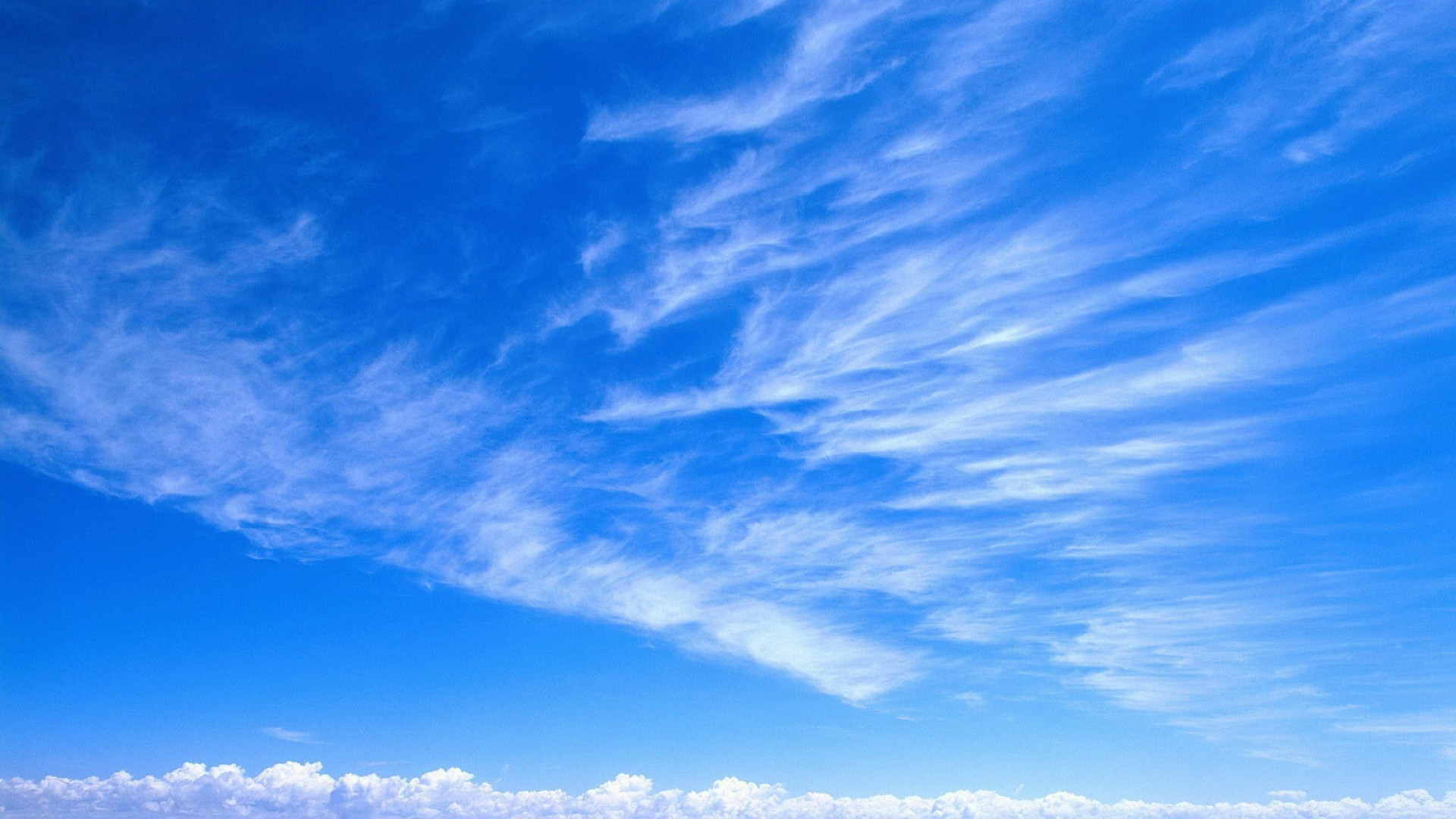 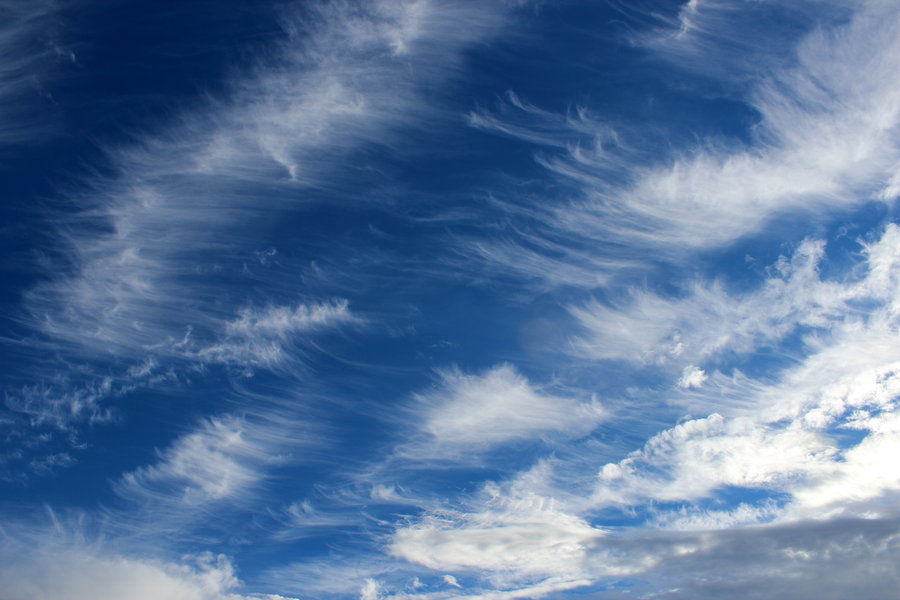 In the air clouds really are separate 3D objects than the blue sky. Clouds reside at some altitude, the blue sky is far higher where the air is thin enough to glow blue under the radiation bombardment from the sun.

In the photo clouds often have no strict limits, they are mixed blue and some greyshade (=white, grey, black) and the edges fade gradually.

You cannot take from every pixel only the white part and reject the blue. But you can use the image as a layer mask for another layer which can be an image or an effect layer.

Here it is used to mask solid white in front of a brickwall: 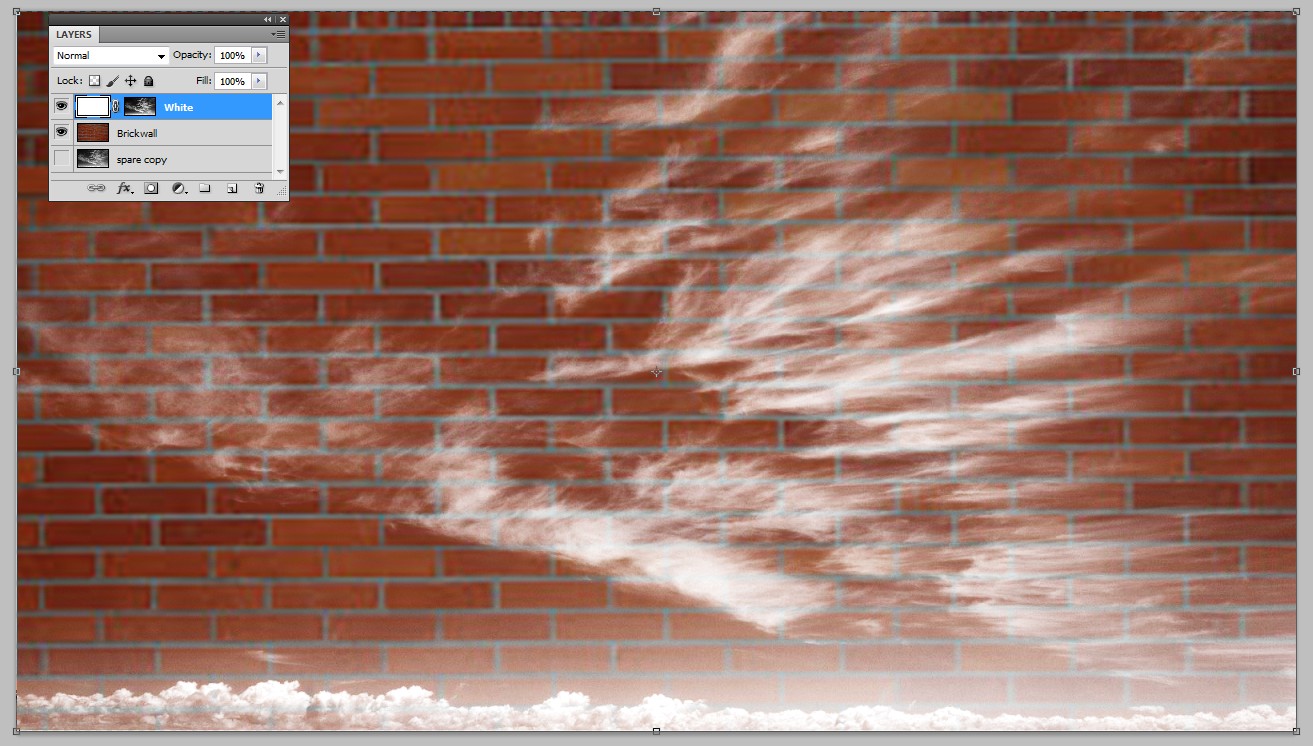 And here it masks a hue shifting adjustment layer: 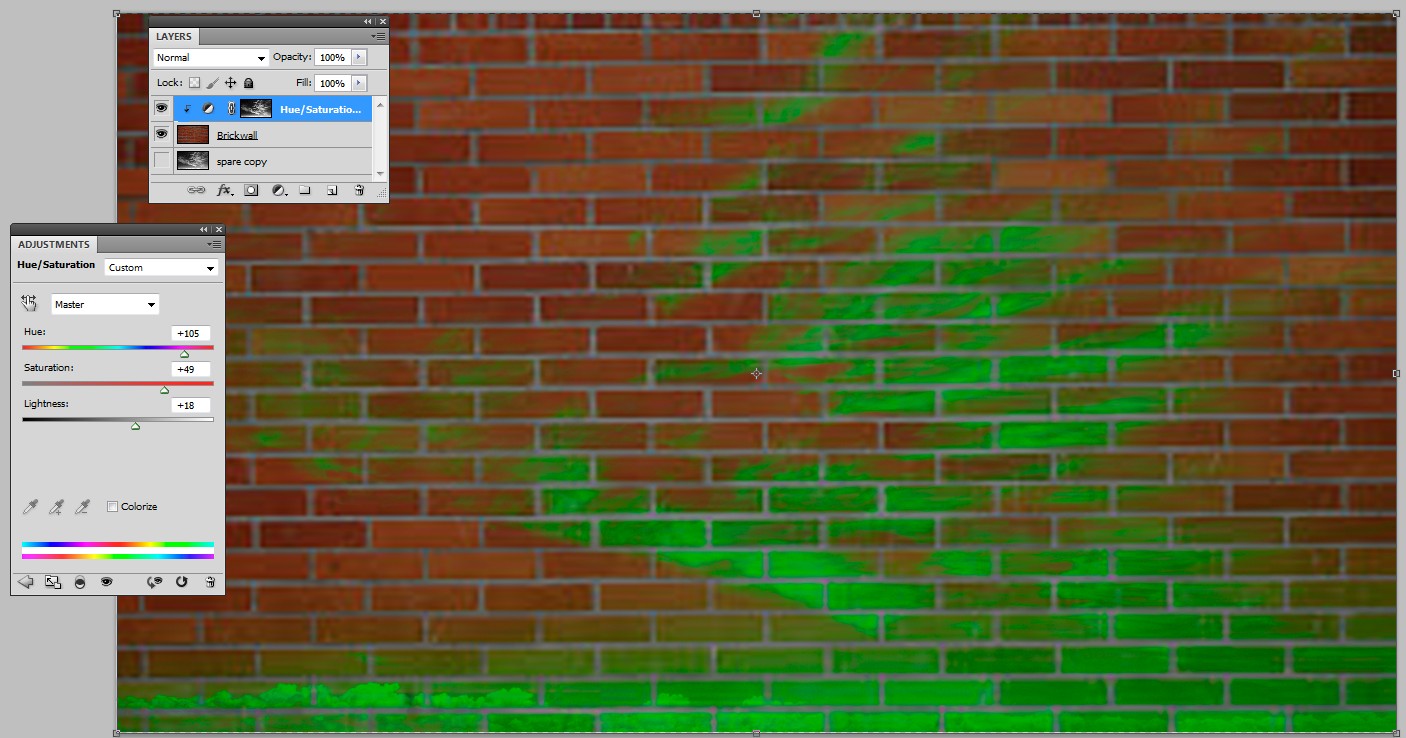 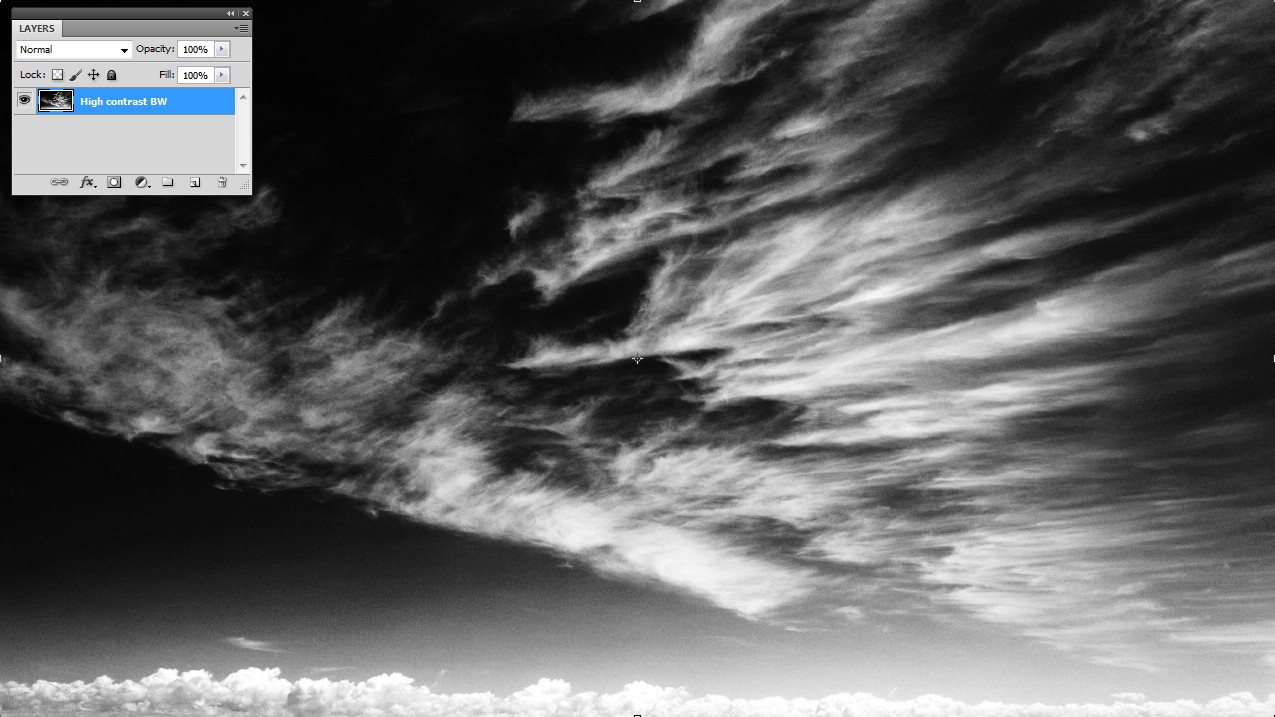 How to insert it to layer mask:

If the fading blue in the bottom bothers you, it's effect can be minimized in the BW mix by increasing the blueness just there. That makes the case a little complex. You may need several attempts to make a good BW mix. It's a good idea to use adjustment layers. 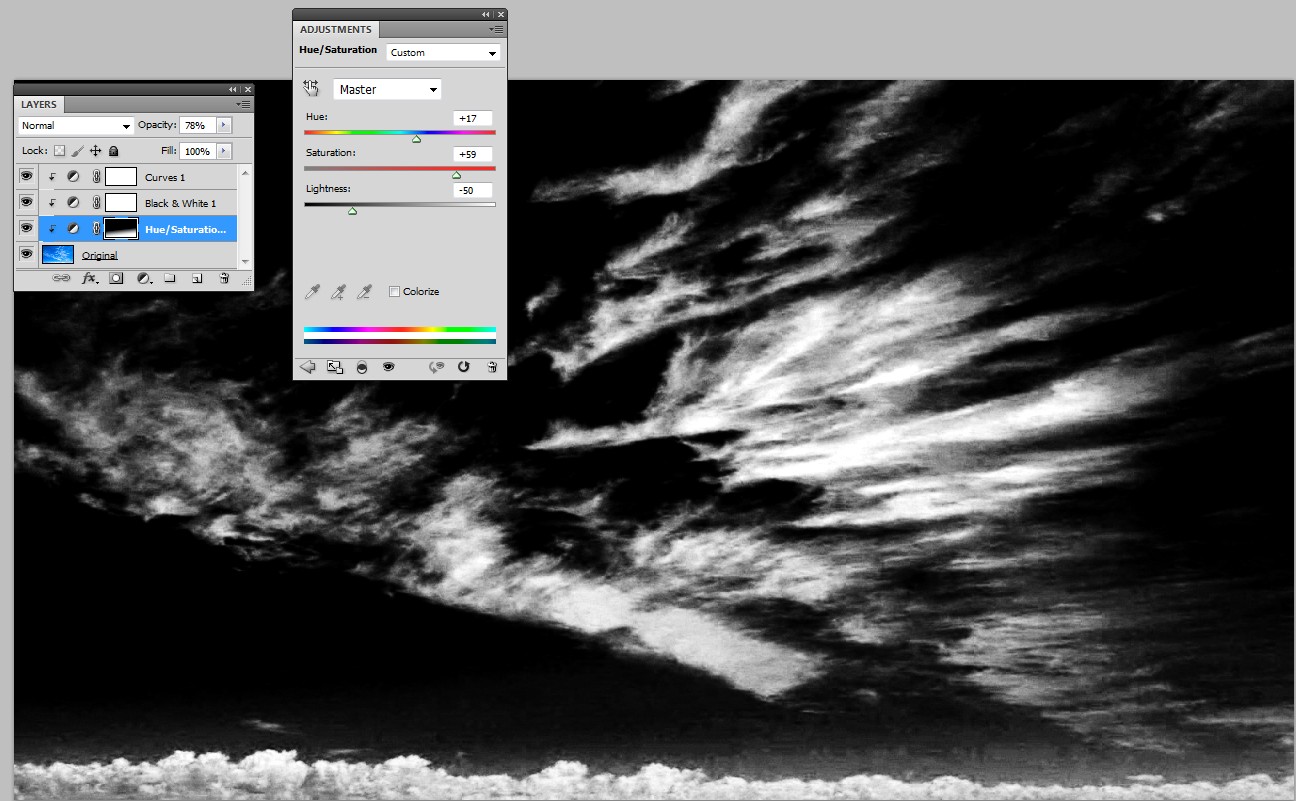 You see here a Hue/saturation layer just above the original to add the "blueness". It adds saturation and reduces brightness. Its effective area is limited to the bottom by a gradient layer mask.

On the top there are adjustment layers for BW mixing and increasing the contrast.

When you are ready with the BW image, select all its layers, duplicate and merge them. Now you have a singe ready to use BW layer but all "mixing" layers for it are still available.

Not the answer you're looking for? Browse other questions tagged adobe-photoshop script or ask your own question.

19
Techniques for cutting out hair accurately
11
Effective way to cut out clouds in photoshop
10
How to remove a green/blue screen background using Photoshop CS5?