I'm having trouble importing .png and . gif files from excel into indesign

I'm working on a project at work that requires creating 100+ mini community profiles. The profiles are a collection of Data so I'm using a data merge to import all the variables.

I'm having a problem with images though. I need to use a couple of graphs imported from Excel because the data analyst I'm working with has written scripts to create and populate a large amount of data from Excel.

The problem happens when I import the images. We're using .PNGs because we need the graphics to have a transparent background and for some reason every couple of graphs I get a giant black streak that runs the length of it. When I open the graphic in Preview I can't see the streak, but if I open the file in either Illustrator or Photoshop I get the same result as InDesign. I'm not sure what the problem could be.

Welcome to a nightmare. If you have Excel worksheets, it's not as bad as it could be (=pasted as low resolution bitmap images to a MS Word document that you should stylize for CMYK printing)

Placing the worksheet to InD brings the numerical data, but no graphs. Copying and pasting brings a low resolution bitmap RGB image of the graph with uneditable texts.

In many cases Excel graphs do not at all fit to the wanted style of the final product. The graph is full of decorative details and the final work needs something minimalist and easy to read.

If the original worksheet is available or extractable from a Word document (depends on how the graph has been imported to Word), you can often reproduce an acceptable graph in Illustrator or other software by starting from the worksheet numbers. As often a good way is to simply redraw it and use the original as a reference.

If you need a crisp vector version of the graph, it sometimes can be extracted from a PDF in Illustrator. Print the worksheet (no gridlines!) as PDF an open it in Illustrator for fixing. As well you can copy and paste the graph to Illustrator.

"Sometimes" = when the graph is flat. 3D-ish graphs are uneditable in Illustrator. An example: 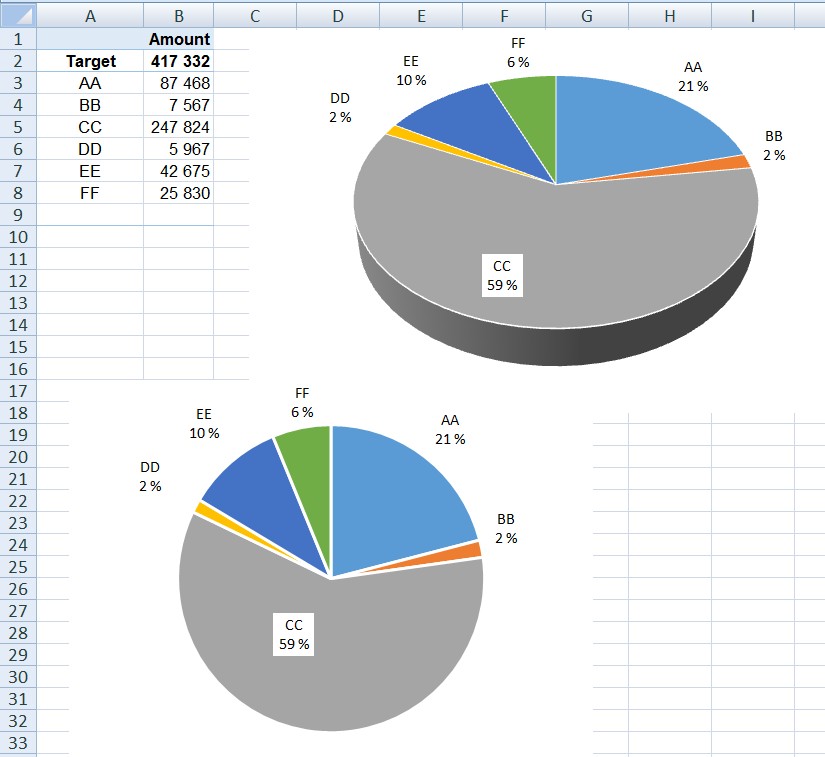 This is actual real word example, only text are changed. The customer had made the 3D pie. The flat version is my copy. Its style is changed to flat.

Both graphs become visible when the page is printed as PDF and opened in Illustrator. To edit the graphs you must release and remove an incredible number of clipping masks. If you copy and paste a graph to Illustrator you in addition must ungroup the parts several times until all group levels are free. In both cases the texts are editable text objects altough divided - one text box is broken to several text objects. Retyping is often the easiest fix. It is best done in InD.

The 3D pie is in PDF very complex. It's made of small splinters. Some of them are in Illustrator marked as "non native graphics, uneditable". Copying and pasting to Illustrator makes the 3D pie a bitmap image. Texts stay as text, but splintered.

The flat pie from the PDF (after releasing and removing the numerous clipping paths) is editable. The white gaps are separate shapes which are easy to remove.

If you copy and paste the flat pie to Illustrator, it needs several ungroupings and clipping mask releasings & removals. In layers panel you see that every object is a group which contains some shape or text and a clipping mask: 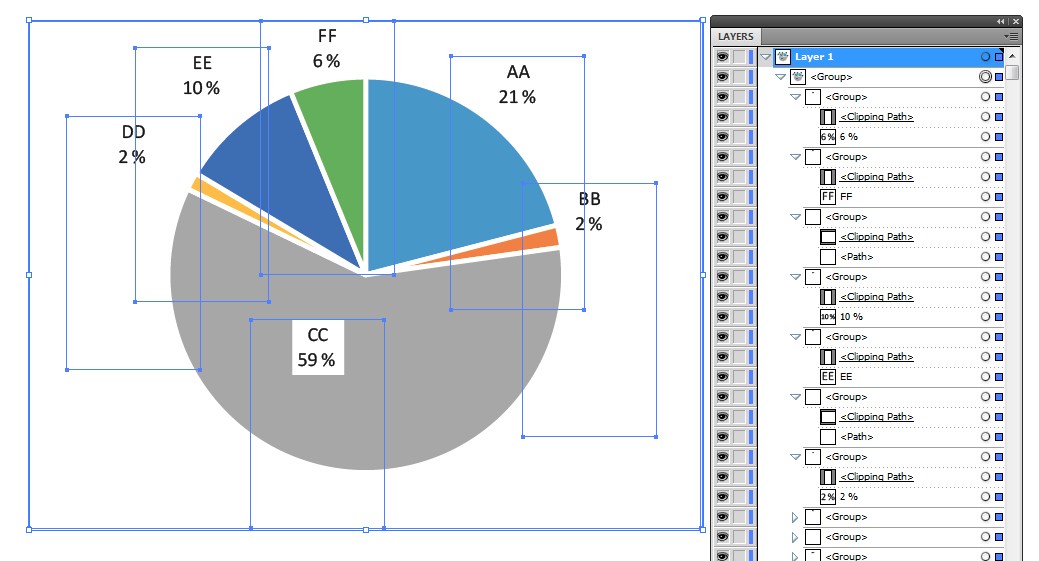 After ungroupings and releasing the clipping masks something difficult to explain appears:

When looking the panels, the pie slices seem to be simple strokeless paths, but in the image they seem to have a thick white stroke. They are not groups nor compound paths. (NOTE: this can be avoided by making a PDF)

In this phase it's a good idea to delete all unnecessary empty rectangles (=previous text frames and released clipping masks). After it you can remove the white parts, if needed:

Now everything seems to be broken: 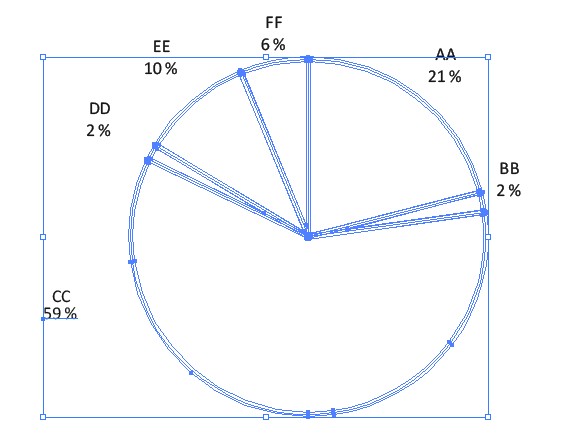 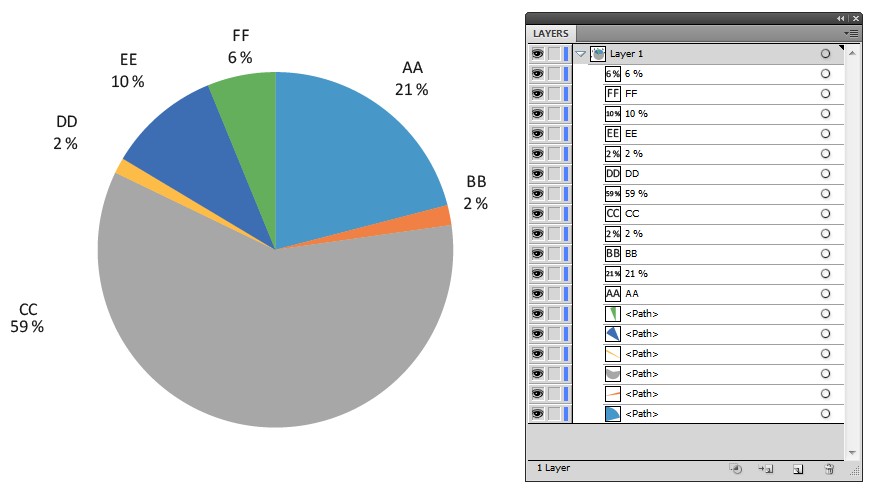 Now the flat pie is ready to get proper colors and texts. That can be done also in InD.

You can add the needed strokes to pie slices. Here a white stroke is selected. In the strokes panel the alignment setting = inside and corner joints = round.

You see that redrawing a simple graph or building it with the graph tool isn't more complex than fixing one imported from Excel.

One trick: Saving the worksheet as old style XLS file and opening it in old Excel (2003 or earlier) reduces the internal complexity of graphs. It really pays off to test it, if the graph has complex curves and you have old Excel somewhere.

ADD: Just in this case the 3D appearance was absolutely wanted. But It was easy to add a gradient filled foot and distort the pie to ellipse. 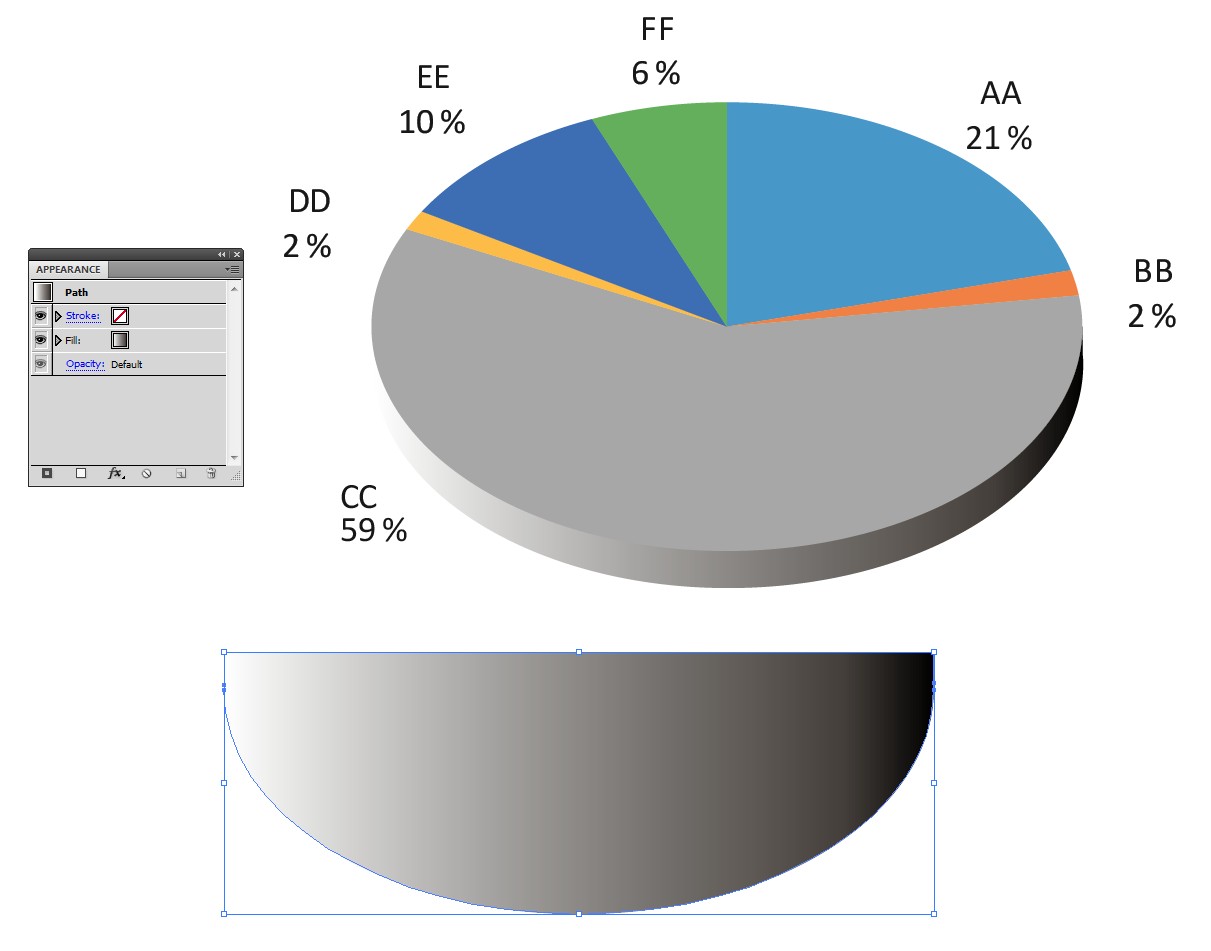 The added foot is shown separately. 3D effect Extrude & Bevel is another possiblity to create thickness.

Importing images from Exel into InDesign is bound to be trouble. Open the images in Photoshop and resave as a png.

Not the answer you're looking for? Browse other questions tagged adobe-indesign images import microsoft-excel or ask your own question.

1
InDesign corrupts imported excel-files. Win/Mac issue with character sets
0
Importing animated GIF into Photoshop CC
0
Embedding a picture in Photoshop without super big size
2
Importing learning cards in Indesign from EXCEL or XML or JSON file while keeping some basic formatting
0
Mapping Excel data with id’s into InDesign
0
Importing Acrobat file into Indesign and retaining comment highlights and text
2
How to import a folder full of pictures, one per page, alphabetically in InDesign
1
When copying graph from Excel and pasting into Illustrator, text is corrupted
0
Importing Excel table to InDesign