I am working with a pretty complex traced AI that I received, and I want to basically make it so that all the visually black stuff is shapes, and all the white outlines (invisible here) are removed. Most of the spaces when a line crosses over another is created by a white outline.

I know about expanding appearance and the pathfinder tool, but because there are so many lines that are crisscrossing, I haven't had an easy way of minusing the fronts away. I could expand appearance and sort every object carefully, but I feel like there may be a quicker way of doing this.

If I put it in Photoshop as a smart object in 'screen' mode, it looks right.. I could put that back in Illy and trace it, but I don't want to complicate the paths. 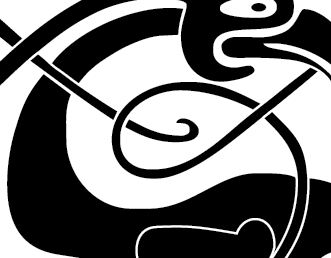 Merge combines areas of the same fill color and deletes any underlying shapes.

Pathfinder > Trim would also work, but it will split all the shapes into individual objects where they overlap. This generally then requires additional work to combine shapes of similar color. Merge is essentially Trim + Combine similar shapes.

0
Adobe Illustrator: how to do a minus globally to make all white areas transparent?

2
Breaking up a live traced word
1
Illustrator: IImage Trace -Not able to release after editing
0
How can I manually add outlines to image traced using Image Trace
1
Looking for a way to create a White logo on translucent background that will be viewable in preview?
5
Subtract a path from a shape in Illustrator CC 2015
1
Opacity problem over white object in Illustrator
1
Outline ImageLine Art from Edge Mask
1
What is a better way to paste illustration from Illustrator to Photoshop without invisible pixels?