In printing from digital images, how is PPI converted to DPI?

I know there are 'similar' questions on Stack Exchange and the internet, but none has answered my question. I am not confused between Pixels Per Inch (PPI) of the digital image and Dots Per Inch (DPI) printing quality of the printer.

What I am confused about is, all the explanations for determining print size, says to take the numerical value of the largest side of the digital image in PIXELS, then divide it by the numerical value of the largest size of the physical real world print you want to create. This basically says 1 pixel = 1 dot. From memory, one tutorial even said that 1 pixel = 1 dot. I do not believe this is true at all (please correct me if I am wrong). A pixel is the smallest part of a digital image, while a dot is a dot on a print medium, such as sheet of paper or canvas and is determined by a printer. They are not the same (as far as I know) and I thought, and have read, that you should not use DPI to refer to digital images (see this post PPI Doesn’t Matter (and stop saying DPI))

It makes sense that digital images are in PPI, they are after all made of pixels But why are some digital images specified in DPI too? And why do printing businesses still ask for images to be supplied as 300 DPI? DPI as I said, is used to specify printer quality, not digital images. And like this post says, I don't believe dot = pixel. Calculating dots per pixel when printing an image It says: "The article is massively over simplifying things though as that's generally not how printing works. A printed dot does not align with the pixels in an image."

Where in this process does a pixel suddenly equate exactly to one dot, or, more importantly, how can I accurately determine print size? (please do not tell me to divide the largest dimensions in pixels by the largest dimensions of the physical print I want in inches, for reasons I have already mentioned). I don't understand how there is any sort of ratio between PPI and DPI, it's like asking Americans to manufacture something in inches and the Europeans to manufacture something in centimetres then forcing them to be equal somehow, or having a ratio magically appear (like this disaster Mars Probe Lost Due to Simple Math Error). All printers are different, and I was under the impression that a pixel is the same size no matter what kind of printer is used.

Please also add 'conversion', 'pixels', and 'dots' as new tags, and others as necessary. Thank you.

How intermediate color is produced in the systems

To make many intensities of colors the printer interleaves white and full color value over many addressable elements. This forms a sort of print analogy to a display pixel called a halftone. A halftone is many dots wide to be able to mix color down in intensity. But its not entirely equal. 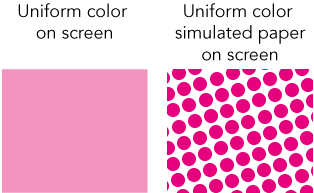 Image 1: color on screen vs zoomed in Halftone on paper. Each pixel in the simulated image represents one dot.

What determines the size

Now things are easy if your imaging device and image have the same data at the exact same color model and exactly same addressable elements nothing need to be done just dump the data onto the device and all is well. Since its easy its how its usually done. If not something has to resample the image to match the devices needs, in other words a computer program has to guess what is between the pixels (for further reading see this post). Now a printer can not really work exactly the same way a monitor does so some resampling will happen regardless of what you do.

So at the end of the day you can choose wherever size you want the image to be. The only question is what will happen to the image when its resampled into the new system. You see resampling does not come without a cost, a resampled image is always either too blurry or too sharp. So choosing the scale has implications on the visual fidelity of your image.

There is no one way to do this resampling and going deeper into the subject gets really mindbogglingly complex and mathematically challenging really fast, so i will not go there.

Generally the smaller the image is the better the resampling works. up until the point where your image becomes so small that you are approaching the Nyquist limit of your device, then all bets suddenly are off. Experimentally it has been concluded that in the conversion you dont get any better fidelity after a certain point which is or a human reading a paper with continuous color about 280-300 samples per inch. (but for edges much more than that!)

There is no inherent relationship between pixels and dots. You can choose for it to be anything you like. But dont expect all combinations to work out as well. At the end of the day a reasonable value is determined by distance you view things.

* Not all printers do, most notably inkjets and sublimation dye printers dont exactly fall into this category.

I believe your confusion is [not so] simply due to a language vagary.

When someone defines a pixel as a dot, a dot should not be taken to mean one dot.

For example: "A colour display is an orderly array of pixels. Each pixel appears as a colour dot."

That is decidedly very different from any formula used for conversions from soft to hard copy.
I hope this helps.

Had same question many years ago. There is one situation when that happen. It's when printing mechanical resolution of machine is equal to amount of pixels. To be exact, some plotters had grid of movement where one dot created by jet reflected exactly one pixel. And as I remember it's resolution was delivered in Lines per Inch LPI.

The main problem with dots per inch/pixel per inch/ points per inch/ is that pixel is (in LCD) a square filled with three vertical rectangles when in printing color is created by circles that overlap each other in different arrangement depending on raster of your choosing. So this, at very beginning, create problem in dimension as square inch can be neatly filled with other squares when filling it with circles will leave blank spaces (And it write your name), or move slightly outside the line to fill the box as best at it can.

You can do simple experiment, in photoshop for example, and enter by hand inch dimension of file and resolution. Save file and reopen. The file would have slight change in some dimensions. Like for example instead of your 300 PPI you would have 299,7 PPI.

The printing shop like to get files with 300 PPI/DPI (they use PPI/DPI interchangeably as in your example people don't get the difference and some programs use different resolution names) so they can adjust desired resolution themselves. It's easier to downgrade resolution than to upscale it. Or it gives better results.

You as a creator, should be aware of results. So how 72 pixel per inch picture looks like printed with plotter, offset or digital industrial printer on desired paper format. And how 200 pixel per inch picture looks like. And of course using different paper.
For example, 100 PPI image printed on offset would look terrible when printed on low absorbent paper. But when printed on toilet paper the spillage would blur itself so the quality wouldn't be noticeable.

Same with purpose. 50 PPI picture is more than ok for a billboard watched from distance, while 270 it's good for printing photographic album.

You are right when you say that all printers are different and there is no real ratio between PPI and DPI. What size would a file need to be to be printed on printer with 4800 DPI?

So to summarize: the right PPI resolution come with time and experience. Until you have those two just use 300 PPI on everything.

A unit for measuring how many pixels (virtual squares) an image contains per inch when printed at a specific size.

A unit for measuring how many dots (physical squares) a printing device can print per inch. Often wrongly used as synonymous with PPI.

A pixel has no size. It is the idea of a colored square.

An image is a collection of pixels ordered in a grid with a certain width and height in pixels.

An image also has settings for width and height in physical units and resolution in PPI. These settings can be changed without changing the data of the image itself and can merely be seen as preferences, not properties.

An image gets its effective resolution when being placed in a vector based layout program (like InDesign or Illustrator) at a certain physical size. Only then can pixel be said to have a size.

But a document can contain different images at different resolutions. Some of them might be rotated (which results in rotated pixels in the pdf!). So a final print document can be a mashup of differently sized and rotated pixels. It doesn't matter, as long as the resolution of each image is above you lower limit (300 PPI is a good rule of thumb for mostly everything).

A normal digital printer or offset press can only print solid colors. It must use some kind of 1-bit pattern to mix the CMYK inks. Most offset printing involves halftone rasters and most digital printers use some kind of stochastic raster. The individual pixel of this pattern is called a dot and is the smallest detail a device can reproduce. The resolution is measured in DPI.

Since these 1-bit patterns must reproduce the 8-bit (or more) colors of the print file, they have to be made at a much higher resolution. Not to ensure super crisp details, but to make it possible to create the illusion of mixed colors using only solid cyan, magenta, yellow and black.

As a designer/artist/photographer, you shouldn't have to worry too much about DPI unless you are comparing the quality of different printers. You can't control where exactly in the printers dot grid your pixels end up anyway and there is bound to be a lot of pixel rounding going on. Even if you work in 1-bit at the resolution of the printing device, your artwork can end up offset compared to the dot grid resulting in missing pixels here and there. It doesn't matter in most cases since it happens at a scale which isn't visible to the human eye (it can mess up very thin 1-bit or vector lines though, but they should be avoided anyway).

5
DPI Vs. PPI Vs. Image dimension, what should be taken to consideration?
1
Calculating dots per pixel when printing an image
0
Scaling Image Down in GIMP Destroys Quality

2
Which Photoshop features are affected by different DPI or PPI tags?
2
Why downsample to 300 ppi only for images above 450 ppi - why not for all images above 300 ppi?
8
Does printing an image at a high PPI consume more ink?
2
Usual DPI to PPI ratio
11
Is a DOT comprised of many PIXELS?
1
Printing images to 200dpi printer
1
Calculating dots per pixel when printing an image
8
Dot vs. Pixel - rudimentary explanation