How is the space at the top of a text field determined? I know it's dependent on the font, but what's the logic.

I can't see a clear relationship between the leading and this space at the top of a text field. 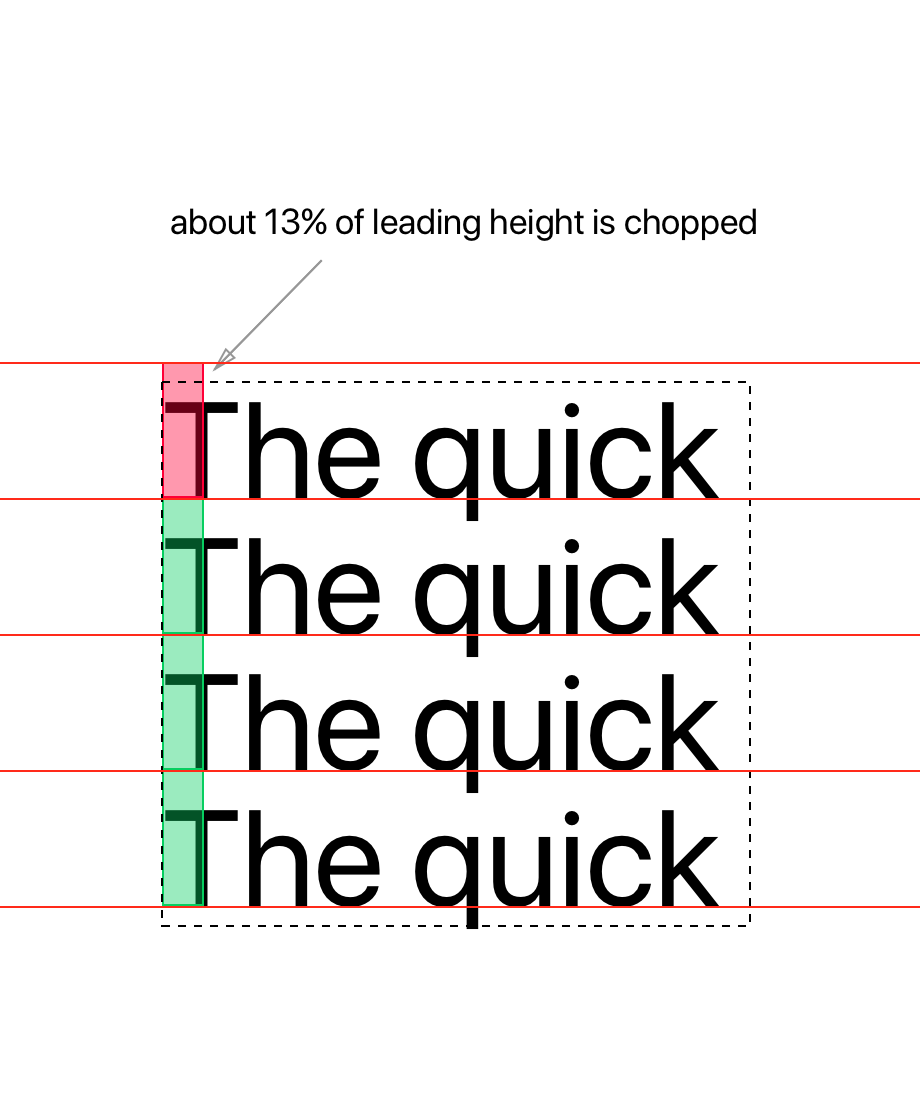 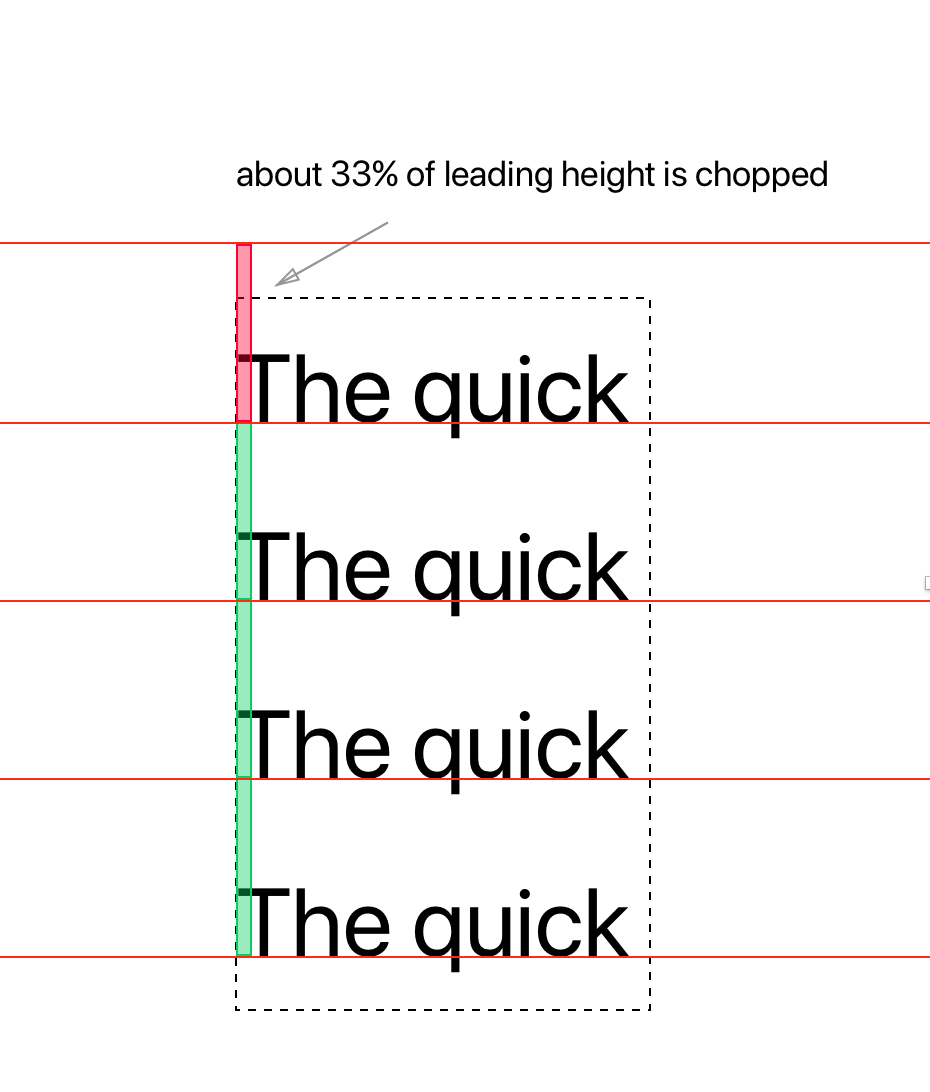 Leading is the space measured from the baseline to the bottom of the bounding box of the glyphs above.

In your images there is no line of text above the first line, so really there's only leading applied there, and no bounding area related to the bottom of glyphs. Without a line of type above it, there is no "bottom space" to see, resulting in a visually smaller space.

Really the top line shows only the leading. Add the area for the bounding box which falls below the baseline and you get the same space.

This can be seen merely by checking the difference....

This is also why, with a single line of type, altering leading has no apparent effect. There is no glyph above to create space between.

Before I fully understood the question.....

As for the general top space as I understand it....

Space (top or bottom) of glyphs is generally provided for other glyphs which contain diacritics or swashes. This is done so that all the base glyph shapes line up.

The actual bounding area for the glyphs can be set to either encompass the entire glyph with "extra" content. Or to sort of "hang it" over the bounding area. Kind of depends on construction of the font itself. The more it "hangs over" the more glyphs may overlap with standard leading values.

A font which does not contain diacritics or other OpenType features may not have this additional space.

There's something wrong in your question, the leading distance is from baseline to baseline, not to descender lower case character to the ascender character of the next line. This image has two paragraph same font size and same leading, but each font has their own ascender and descender characters design. The top is the wrong leading measuring and the bottom is the right one. 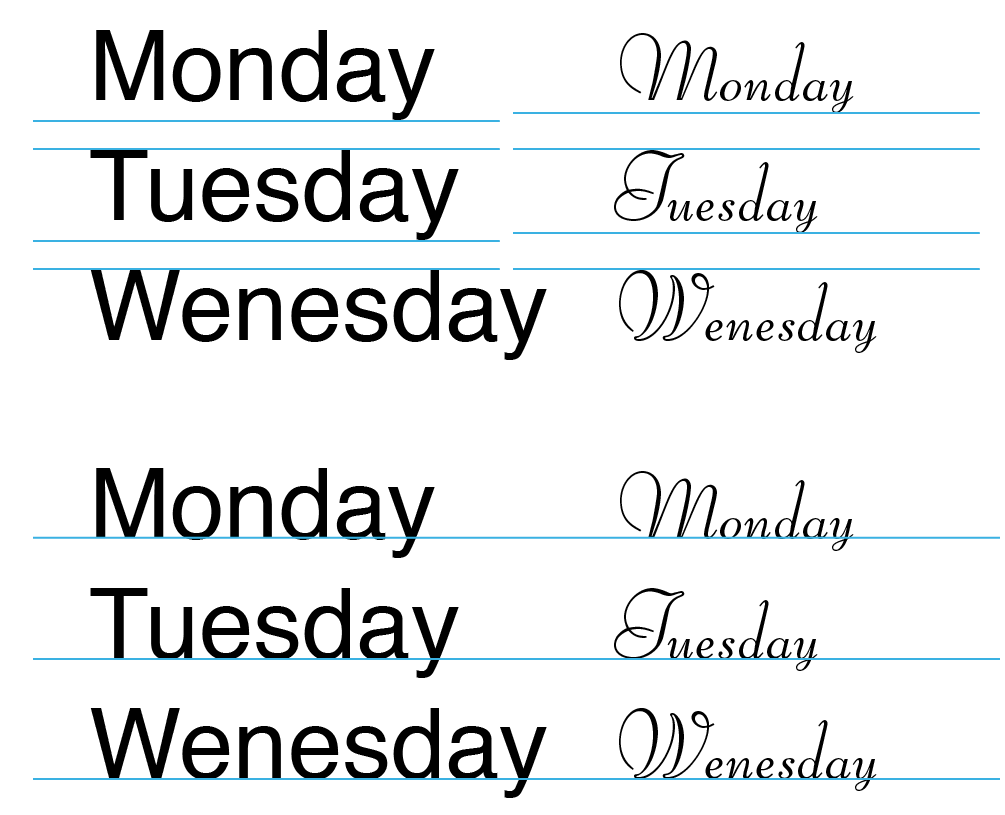 See if the right measuring helps to answer your question.

The top space of each font is called top shoulder and comes from the movable metallic types of the press printing. On the origin it was the safe space of each metallic line of characters to avoid the touching between ascenders and descenders.

Not the answer you're looking for? Browse other questions tagged text typography typefaces typesetting font-design or ask your own question.

0
In Adobe Fireworks, how do I make the margin beneath the text in a text box smaller?
0
How to get rid of the leading (not sure if that's what it's called) in point text in Illustrator Cs5
1
Text Alignment Issues When Opening Adobe Illustrator CS5 File in CorelDRAW X6
0
Photoshop Text Dipping In Line - Can't Fix
1
Inset spacing different on other computer
1
InDesign CC: Text won't go to top of frame (checked all other issues)
10
Is there a general rule regarding font spacing?
4
Is there a term for adjusting the spacing between WORDS for a font (not letters)?