I want to create a brushstroke along a given path, that looks like it has been made with a Chinese calligraphy brush.

The exact effect that I'm going for is, that it starts kind of bold at the beginning of the stroke and gets thinner, sharper end pointier towards the end.

This is the Chinese calligraphy brush style I was talking about, however, the exact stroke that I'm going for is not displayed here.

FYI I work with a mouse and not a graphic tablet.

Probably Photoshop is not enough.

You probably want to use a pressure sensitive and angle sensitive drawing tablet.

Some economic tablets are pressure sensitive, but higher end ones are angle sensitive as well.

Also, you can look for some paint program, for example, CorelPainter.

But you could also prepare some brushes on a vector based program as @user287001 commented. CorelDraw also can help you simulating this type of strokes.

One interesting option is MyPaint, which is free.

It is also "velocity sensitive", so you can have different brush strokes based on the speed of the mouse. http://mypaint.org/

If you have no pressure sensitive graphics tablet and stylus, then it's going to be difficult in Photoshop. Photoshop has a "simulate pressure" option when stroking a path, but it makes the brush thin at both ends and thick in the middle.

You could do it in vector image editing software however, such as Illustrator, since you can apply a brush to a path. It's also possible in Inskcape (which is free - see its pattern along a path functionality). The example below is from Illustrator.

And this one below was made in Inskcape, using the pencil tool, some smoothing, and the brush shape copied from the clipboard in the tool options. I made the "brush" by simply Tracing a bitmap screen capture of the shape from Illustrator. You could do the same by scanning a real brush stroke and Tracing the bitmap. The same is also possible in Illustrator. 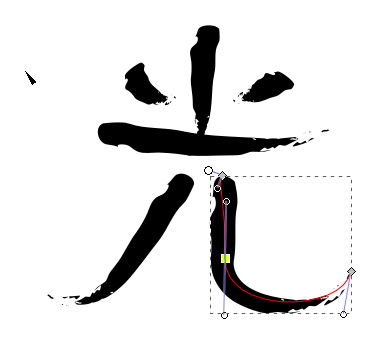 The nice thing about using a vector image editor, is that the brush strokes are attached to the path. So, you can edit the paths, and the brush stroke moves with the path like a live effect.

You do not want especially little (=ability to input with mouse pieces of fine art that needs years of training to master).

I see an analogy: You want to build solo violin or singing from recorded samples.

Forget Photoshop. In a capable vector drawing program such as Illustrator or Affinity Design you can define pattern brushes (=image brush in Affinity).

Defining an image of a single horizontal stroke to be a brush, you can get it bended and stretched to any lenght and direction. You draw only the backbones of the strokes and then assign the appropriate pattern brushes (=image brushes in Affinity) to them.

Learn the details from the manual of the software. In Illustrator you simply drag a shape to the brushes panel and define it to be a pattern brush. The shape can be for example drawn with the Pen.

You absolutely can do this with a mouse in Affinity Photo, or in Adobe Illustrator or Affinity Designer, as all three support pressure-based brushes for tablets, but all three also allow you to easily edit the pressure curve or stroke width without having to have a tablet at all.

Not the answer you're looking for? Browse other questions tagged adobe-photoshop fonts brush font-design brush-dynamics or ask your own question.

1
How do I use the paint brush with a fill in illustrator?
1
Join multiple brush strokes into shape I can fill
0
Is there a good free replacement for the "Foliage" brush in Corel's Bob Ross "Mystic Mountain" toolset?
1
Photoshop CC brush-specific dynamics
4
When brushing with a translucent colour, is there any way to make multiple strokes into one?
0
GIMP: Gradient paintbrush
1
Why does my brush look different than it's supposed to?
0
Adobe suite: Distort PNG by adding "curve"?