I am working on a small car animation project. On my scene, I have three cars which will be crossing a crossroad. It is a simple project but I would like to have my lighting set up correctly. From what I know and from what I heard a 3 point lighting system is very common. I know how to set it up for one object on the scene but things get a bit hard when it goes for more objects.

Does anyone have any idea or can link me some useful tutorials for my issue? I know that a lot of people use Sky lighting and just teak with the render settings, but I would really like to use that 3 point system.

animation cinema4d lighting-effects
Share
Improve this question
edited May 29 '18 at 8:14

You have it wrong... 3 Light setup is for photos in a studio. You do not have that outside.

On this planet, at least, we have one Sun.

And the light it casts bounces all over the place illuminating a bit the surroundings. This is called ambient light.

If you have an old rendering program, you can fake in a primitive way this bounced light using a light on the opposite side of the scene without casting shadows, so it goes thru all the floors, etc, and all objects have a little bit of light on its own shadow side. 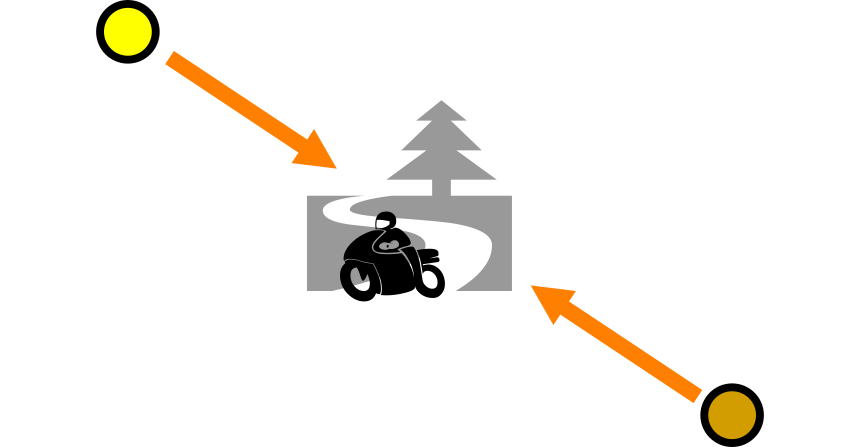 But if your program is a modern one nice setup is to add Ambient Occlusion to your scene and one infinite light.

On a fast machine, you could use HDRI illumination.

Let's put it this way:

Three point lighting is used as the underlying basis for lighting designs in the studio for portraiture, and for table-top product shots, and in larger cove-type studios for shooting highly composed and controlled vehicle ads.

In a three point setup you have:

1) a key light - the main casting light whose primary job is to illuminate the scene and the immediate secondary role is to help define forms through explicit directional shadow casting 2) a fill light - typically almost directly opposing the Key in direction, the fill light is used to soften the shadows cast by the key, and provide a softer, more diffuse general illumination, so that even in the shadows cast by the key, the subject is still discernable.
3) a rim light - this is almost always behind the subject or object relative to the camera, (or above) and often on the other side (left vs right) from the key light, and has a singular role: the creation of a highlight at the upper rim of the subject or object - no role in overall light, no role in shadow casting - it's basically there to "paint" a highlight.

This sort of lighting setup is all managed by the relative angles of those lights to the camera, and the form of the subject, and the surface qualities of that subject determine how strong those lights are, how hard or soft the edges, and their relative intensities to one another.

This is all done to get a super high resolution, high contrast, easily managed and relatable image in highly controlled circumstances - marketing, portraiture and so on.

As you can imagine, this is not applicable to a moving subject, a moving tracking panning and dollying camera, and typical exterior lighting.

Doesn't mean no-one does it, it's just insanely complicated to pull off.

It also has another problem: it's so contrary to the way we all experience the world every day (one very powerful infinite distance directional light source, atmospheric haze, ambient light / radiosity / global illumination [that bouncing of the directional light by all nearby or observable surfaces], ambient occlusion [the blocking of that bouncing light by corners and surface details, and other secondary or tertiary light sources]) that if you can make it work, it feels totally wrong and will make your animated piece feel very artificial, even if everything else is spot-on photoreal.

As Raphael said in his excellent answer, if you've a decently fast machine, it's often far better to light exterior stuff, particularly animated stuff, with an HDRI environment image as the light source instead of a "sun" type directional light, and use Global Illumination for the rest.

Not the answer you're looking for? Browse other questions tagged animation cinema4d lighting-effects or ask your own question.