Kerning on the fly

Do anyone know any algorithm which would calculate automatically kerning of characters based on glyph shapes when user types text?

I don't mean trivial calculation of advance widths or similar, I mean analyzing the shape of glyphs to estimate the visually optimal distance between characters. For example if we lay out three characters sequentially in a line, the middle character should SEEM to be in the center of the line despite of the character's shapes. An example enlightens the kerning-on-the-fly functionality: 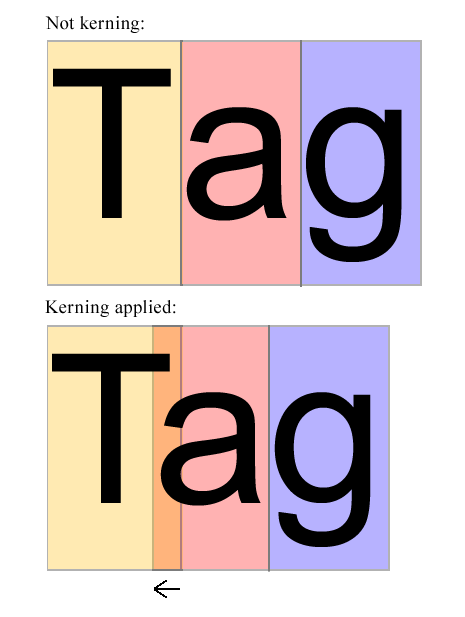 In the above image a seems to be too right. It should be shifted a certain amount towards T so that it seems to be in the middle of T and g. The algorithm should examine the shapes of T and a (and possibly other letters also) and decide how much a have to be shifted to the left. This certain amount is the thing that the algorithm should calculate - WITHOUT EXAMINING THE POSSIBLE KERNING PAIRS OF THE FONT.

I'm thinking of coding a javascript (+svg+html) program that uses hand drawn fonts and many of them lacks kerning pairs. The textfields will be editable and can include text of multiple fonts. I think that kerning-on-the-fly could be one way to ensure mean text flow in this case.

EDIT: One starting point to this could be to use svg font, so it's easy to get path values. In svg font the path is defined this way:

The algorithm (or javascript code) should examine those paths some way and determine the optimal distance between them.

That way, the empty 'area' between letters should get squeezed to a pretty common average. Specify the minimum gap and the minimum area using trial and error and your own taste, and maybe allow those parameters to be adjusted by some other agent as well... like a manual kerning value.

This is a fairly simple algorithm I tried once, and may be good enough.

Render the characters in low resolution - say six or seven pixels tall (height of typical capital) about the same horizontally. You want a simple binary map of where there is empty space vs parts of the letter, on a simple low-res grid.

"Fatten" these letter maps. That is, fill each empty cell that's adjacent to a filled cell. This is to claim empty territory closest to the letter edges, so the neighboring letter doesn't get too close.

Play "horizontal Tetris" with the resulting letter maps. Let gravity act to the left. The bulging left-hand "belly" of the "a" will "fall" into the cavity under the overbar of the "T". How many cells did the "a" move? Scale that up in proportion to the actual size of the letters and that's how far to kern the actual high-res "a" leftward.

Algorithms for auto-kerning exist already. None are fool-proof and they tend to need a bit of hand-holding and manual correction of certain aspects, especially if your tracking is relatively tight.

But those algorithms are for applying the kerning to the font file, not to the letters as they are generated from the font file.

Have you considered applying auto-kerning to the font file?

Fontforge (open source) and Fontlab (commercial) contain auto-kerning algorithms. They would have a relatively steep learning curve - you have to be familiar with technical aspects of how fonts work.

There is also iKern which is a guy that offers a commercial font-kerning service whereby he kerns your font for you and does a rather excellent job. I don't know how much it would cost.

I haven't got time to think this through fully, or draw illustrations, but I had a half- idea based around first bisecting each glyph vertically.

Then for each half, determine two vertical axes: - the bisector - exactly half between left and right extremes - the "weight" axis - exactly half the ink on each side

Then move the adjacent neighbour glyph toward or away from the test half-glyph based on the relative positions of the two axes.

However, I'm sure there's a flaw in that "AA" would be kerned together just as much as "AV".

Considering upper case and small case , there are 56X55=2652 font-pair situations you should concern,all of the solutions may be easily broken cause if you change the font style , all rules gone.

The best way is use machine learning technique , try to establish neural network study model , and import multiple kerned text image or vector or things like that , train that model and use that trained model to intelligently adjust any kind of font .

cause there is no static algorithm to adjust font perfectly in root,machine learning would be a good solution to this kind of problem!

Not the answer you're looking for? Browse other questions tagged automation kerning or ask your own question.

17
What is kerning and what is the point of it?
15
Kerning Feedback
2
Tracking in relation to kerning
7
Is kerning lacking in the Gentium font?
7
Kerning Approach for Letters with Large Spaces
3
The logic of kerning classes
3
Help with kerning in circle graphic