SVG for Web -- possible to use clipping via CSS without a clipPath?

I'm not too well versed (yet?) in using SVG for the web. What I do know is that simple shapes are better than complex paths, if at all possible (due to simple points versus pathing points). Because of this, I've attempted to recreate a logo using very simple paths (ellipses and rectangles, with a few path shapes - adjusted simple shapes - where necessary).

By using simple shapes, using object order relevance (top/bottom), I can obscure certain areas of the logo without resorting to using paths. Unfortunately that obscured area may, for certain purposes, need to be transparent.

Therefore, I'm wondering if it's possible to create an SVG that uses defined paths (of simple objects) that can be applied as clipping paths via CSS declarations, or just a solid color, depending? 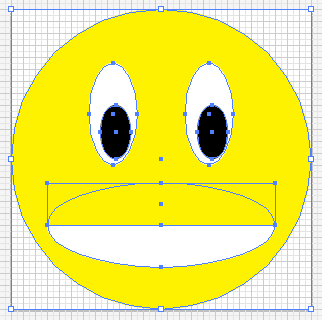 Here, the white used to create the whites of the eyes and the mouth may need to be transparent, clipping at the lower yellow object. At other times it may be required for these objects to have a colored fill. In this example, would I need two completely separate files to solve the problem, or is it possible to do this with a single file? If with a single file, would I instead have to resort to using paths instead of simple shapes?

Edit/Update: Upon looking more closely at the solution provided by Danielillo (and after having tested CSS's clip-path property) I discovered SVG's filter element and options. The feFlood filter should provide the capabilities that I originally didn't know that I was actually looking for.

Here a Codepen with the same SVG in two div:

Not the answer you're looking for? Browse other questions tagged adobe-illustrator website-design svg css cs5 or ask your own question.

6
Long Shadow Effect in SVG for Web
5
How to create an inverse path
5
SVG optimization practices when drawing in Illustrator
1
Illustrator SVG for web using CSS to supply the color for different scenarios
1
SVG - make overlapping lines in a <path> element visable
1
Exporting SVG from illustrator as strokes instead of paths
2
Inkscape causing tool paths to be doubled/duplicated
5
How to represent blurry artwork with vectors (Illustrator or SVG)?
1
Generating a clickable SVG floorplan, where I need to manually "close off" rooms to make them clickable
0
Use SVG clip path as binary choice on showing objects?