Leaflet fold where full-page spread is the last thing seen?

Is there a type of fold for one-sheet flyers where the last thing a reader reaches while working through it in a natural way is a full-page spread, and where sections of that full page spread are not seen before it is reached?

Trying to think about how that could work is giving me a headache... and I'm starting to run out of paper to test-fold :)

The closest I've found so far is (from the book Forms Folds and Sizes) the '6 page barrel fold'. It gives everything except the very back panel before reaching the centrefold, which is close enough, but 1/3 of the centrefold becomes visible in isolation after the first opening.

The problem is that one of the brown centrefold panels is shown on its own at step 2 separated from the others - I'm hoping for a fold where the whole centrefold is introduced as one unit, as late as possible in the reader's progression through the folds. Is this possible?

Taking a classic 'Closed gate' fold (which introduces the centrefold too early)...

...and turning it around would theoretically solve the problem...

...but unfortunately, in some very unscientific testing on colleagues, I find that while about 50-60% read through like that, about 20-25% read it like this...

...which would result in content being read out of sequence and the natural flow being broken. How they read these seemed to hinge on how much the leaflet happened to fall open while they turned it over in their hands.

The reason why reading order is key is that the content is a series of information panels, which together build up a complete picture, and go progressively deeper into a topic. So, if they are read out of sequence, it might not be obviously wrong to a reader as panels cover separate topics, but it would make less sense because the reader will be trying to understand a detailed topic before they've understood more basic foundational info.

If that's hard to visualise, imagine something like the structure used in The Oatmeal, where a series of points are made that are factually independent, but together progressively flesh out an overall picture. Now imagine you were producing a leaflet version - you don't want to distract from the flow of the content, and you want to be sure it's read in the right order else the message can be weakened or muddied.

And the reason the centrefold needs to be last or nearly last is, that's how the content is - the final point is a difficult multi-faceted point that needs the extra space and needs the prior background to have been already read.

Centre-folding the closed gate fold so it barrels in on itself kind of works...

...but the very narrow front is a bit inflexible. The marketing peeps might worry it'll get lost. So I'm leaving this open in case of a breakthrough or inspiration...

In misinterpreting Alan G's answer below, I discovered by accident that a classic 'French Fold', which I'd initially overlooked, actually works pretty well for this, too. There's ambiguity between steps 3 and 4, and a risk that panel 4 might be missed, but in my case that's fine as step 4 is likely to be closing remarks, references, footer-like material etc that are harmless if out of sequence. 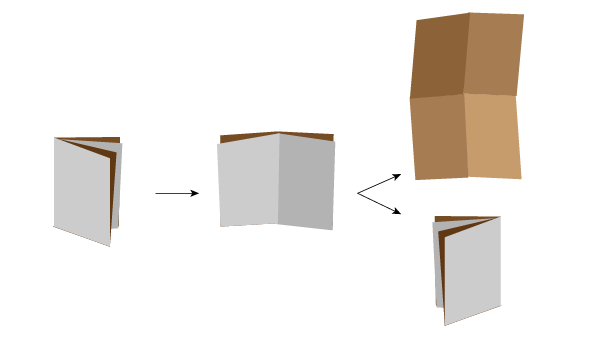 The bit of information I'm missing here is the required finished size of the piece. If it's arbitrary, then I would suggest abandoning the idea of doing this with only vertical folds. A simple closed gatefold that is then folded horizontally, top folded over bottom so the open edge is at the bottom, forces the opening sequence to be a) front panel, b) gate wings, c) full inside sheet. The back and the front panels will square or landscape, the gate wings portrait and the inside again landscape.

I use a similar approach in one piece we do twice a year for a particular client, but in the reverse sequence: the flat is folded on a horizontal, then two vertical folds make the finished trifold. The layout of the content makes the starting point (the obvious front panel) and sequence of unfolding self-evident and inevitable.

I'd say that your content should control the reader, in the same way you use content to define the eye trail in an ad. If the content has no evident sequence or orientation, the unfolding sequence will almost certainly be random.

I got around the "back" being the last page viewed by basically leaving it (nearly) blank. meaning that the central spread WAS the last "content view" the customer sees.

1) Why not just fold the flyer in half? You have the outside and the inside, period.

2) In your fourth and fifth examples, the amount of time between steps 2 and 3 can be measured in tenths of a second. Why is it such a big deal not to see the center all at once?

Not the answer you're looking for? Browse other questions tagged print-design page-layout information-graphics folding or ask your own question.

7
Encyclopaedia-style InDesign running headers, where pages have many, one or zero headings
1
How to create a grid system on a tri fold leaflet or brochure in InDesign
2
Preparing document for print to have reverse creases
11
How to create flow and rhythm through composition
1
Layout of a piece that will be folded horizontally (InDesign)
1
Long document with two independetly running columns
2
The process of setting up Baseline Grid
1
Why do things show up on the wrong page in scribus? Is this bad?
4
Indication at page bottom that a poem's stanza breaks or does not break?