How can I slice parallelogram shapes to HTML/CSS?

I am beginner webdeveloper and I don't know how to slice this design into compatible and cross-browser code. How these parallelogram shaped items should be sliced?

There are also hover and selected states so I would probably use CSS sprites for that, but main problem for me are these parallelograms

Any help and advice is much appreciated. Thanks in advance.

You can save them as parallelograms with transparent edges (png) (meaning of course he image will be square). In your CSS you can then set your div container to:

The -5px is just an example. In html you could have used more complex shapes directly, but html5 is in draft mode and is yet not fully supported.

In the "old" days we would have saved out the whole image as-is and apply an image map to it. An image map specifies a polygon that will be the hotspot on an image. For each polygon you define you can specify click events and so forth as ordinary.

Defining image maps manually is a bit tedious though, but if you have access to f.ex. Dreamweaver you can simply just draw the polygon on top of your image and Dreamweaver will do the rest for you.

Here is a tutorial on how to make image maps:
http://www.javascriptkit.com/howto/imagemap.shtml

I found an online service where you can define maps too, I'm not sure how good it is, but give it a try in case you don't have Dreamweaver or a similar tool:
http://www.image-maps.com/

Example on how you can define hot-spots in an image map in Dreamweaver: 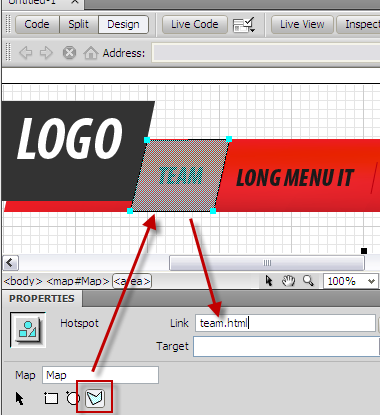 In code you would then end up with:

Adding to Abdias answer, you don't necessarily have to cut each button either. For the main red bar, for example (and this applies to the other elements) you could have three images/sprites: Left, medium and right. Left and right would be the diagonals, medium would be a repeated background 1px width with the gradient in it. I'd probably use three divs per "button", one with each background.

You can do the same for the others, and use position:absolute and z-index to put one on top of the other. Or, if you don't want to support ie8- you could do everything with css3.

Not the answer you're looking for? Browse other questions tagged css or ask your own question.

27
Do web frameworks such as Bootstrap or HTML5 boilerplate offer anything to a designer (not developer)?
3
Can I re-color my artwork programmatically?
1
PSD to HTML/CSS ON PHP/MYSQL SCRIPT
0
CSS for HTML in photoshop