I have found that reducing the opacity against a white background is a good way to find usable lighter and less saturated tints of a base color.

As an example take this picture of an orange color:

The lower row shows the variants. The percentages are the opacities.

Having a white background and reducing the opacity is good when I search good tints, but I like to use equivalent 100% opaque RGB colors in the final product.

How do I calculate or otherwise find the equivalent RGB numbers, when the RGB numbers of the base color and the opacity are already selected?

I have tried color picker, but in Illustrator it at least gives only the base color.

The formula is the general opacity formula, only simplified for this special case - the partially transparent top layer is against pure white.

If you are in Illustrator and want to copy the color with the color picker, make a copy of the partially transparent object and rasterize it. Select white background in the rasterizing dialog. Now the color picker gives the color, no calculations are needed.

I wrote a tool for this: https://github.com/igrmk/blec. For your specific case you may use it this way

Last ef is the hex representation of an alpha channel. Or you may use it like this

Specifying the opacity as a decimal fraction.

Please note that the suggested formula Y = 255 - P * (255 - X) is not quite accurate due to a gamma correction. More accurate one would be Y = (255^G * (1 - P) + X^G * P) ^ (1 / G) where Y — resulting RGB component value, X — overlay RGB component value, P — its opacity, G — a value of a gamma. Most common value of a gamma is 2.2. The reason to include a gamma correction into the formula is to move components into linear space on calculating. Almost every RGB space that is used today interprets color components in a non-linear way in order to place more color information in 8 bits. Historically it was introduced to compensate a non-linearity of CRT displays.

Here is an example why a gamma correction is important for the blending. Let's take this red image

and this blue image

Now let's blend them without a gamma correction (gamma = 1)

Let's enable a gamma correction and do the same (gamma = 2.2)

The image contains pixels of just two colors but a probability of blue linearly increases from 0 in the left to 1 in the right. The result looks much closer to image with gamma = 2.2 in terms of lightness and transition colors. Try to look at it from a distance. And this is what you probably expect from blending two colors. We literally blend them by mixing like aquarelle in this example. So gamma is very important thing for blending especially when opacity is close to 0.5.

Let's finally compare the blending of opaque red and blue with alpha of 0.5 where the effect of a gamma correction is maximum.

Note 1: To compare a dithering to a blending you need to look at images at 100% scale so that every single pixel of the image occupies exactly one pixel of a screen. This is almost never the case if you use a mobile phone or a retina display. If you look at images at different scale probably you look at antialiased image. The antialiasing can lead to very inaccurate results because it doesn't use a gamma correction at the moment. I can confirm it for Chrome 83 on Android 10 and for the latest Safari on iOS 13. I guess it needs too much resources to do it right way. So it effectively decreases a gamma of a display to about 1.8 when you look at very contrast noisy images.

Note 2: Not every display is calibrated well. If you feel like an image with gamma of 2.2 and an image with a dithering produce different colors I have a bad news for you. You can check a gamma of you monitor here http://web.mit.edu/jmorzins/www/gamma/adilger/gamma.html. However if you use a mobile device it is better to use an application because an antialiasing can lead to very inaccurate results.

Here is a code to get these pictures https://pastebin.com/fHYtWrMb.

No need to go to all this technical calculations. You can instead use the swatches pannel. You save your original color as a swatch with the Global option ticked. 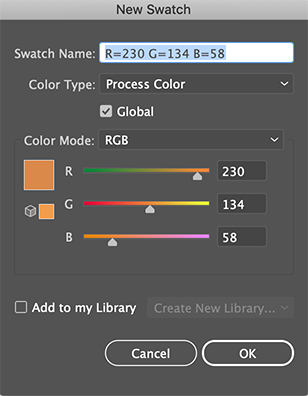 You can then use the color panel and select the percentage you need. This is does not use transparency, it is opaque.

When you need to see the RGB or Hex code for your final tint, you can then press on the rgb icon on the color panel and your you can see the RGB and Hex values. 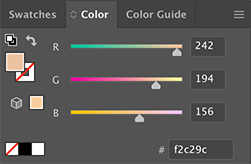 I found this thread looking for the opposite process. I had the final color, and initial color (flattened in a png file) and I reversed the equation above to figure out how to find the opacity that gave the lighter shade. Just wanted to share.

Not the answer you're looking for? Browse other questions tagged color transparency color-reproduction or ask your own question.