Why is azure used instead of teal as cyan in color mixing?

Why does azure make a better cyan than teal for color mixing?

On the HSV spectrum, cyan sits at 180 degrees, which is bright teal, whereas most printer inks and best primary blues for painting and sketching seem to sit between 190 and 205 degrees on HSV.

If teal is literally cyan, and azure is not quite cyan, shouldn't it make a better cyan than azure since it absorbs red more purely than azure does (and therefore allow finer control in subtractive color mixing)?

Azure seems so popular for cyan that the "new color theory" painters on youtube seem to almost always point to an azure: cerulean (often called brilliant blue), phthalo blue, or prussian blue when they refer to cyan, none of which are really "cyan" in my eyes.

Why does azure seem so much better at mixing than teal (a true shade of cyan)?

The hsv color space does not actually reflect physics and neurological truth of how the system works. So the spread of values is more artistic/practical consideration than scientifically motivated. So doing any reasoning on color properties by the angle in HSV space is just plain misleading.

Second color names are also pretty arbitrary. And mean different things to different users. The names don't necessarily also follow the same angle throughout the lightness spectrum. Neither is the spread of colors in the wheel especially well motivated, i would spread it out a bit differently to be honest. Or then use some CIE derived space in polar form.

Lets face it artists in the loop systems can easily mix the colors out of nearly any combination of base colors. Just that techniocal systems that need to work predictably even without human intervention can not.

Third not all printers have the came cyan color as their base.

Ammendum: Theres nothing simple about human vision. it is far far more complicated that most people assume, and brief introductions lead you to believe.

Very good question; the answer has mainly to do with the fact that we must choose from actual available pigments, not hues. There just isn't any cheap, highly chromatic, permanent transparent pigment of the hue you're calling cyan that compares with phthalocyanine blue, the various varieties of which are in the hue range you're calling azure. One kind of cobalt green can be close to digital cyan but it is expensive and toxic and more to the point opaque, which restricts the range of colours it can yield. Another relevant factor is that because mixing paths between blue and yellow pigments consistently veer out towards green, the non-ideal hue of phthalocyanine blue is not as much of a drawback as it would be otherwise. http://www.huevaluechroma.com/pics/0.2.6.jpg

HSV is a way to describe RGB colours. It has little to do with physical paints, inks and pigments.

What do you mean by cyan? Are you talking about the bright blue #00FFFF in RGB? 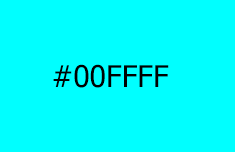 3
What is Pantone Cyan used for?
1
Is there a way to get correct color mixing without posterization, working with 8 bits only? Or something better than Linear RGB color space mixing?
0
is there any painting medium other than light emitters(like computer) that has cyan?
0
How to calculate the RGB color values with a given alpha value for mixing with another color to achieve a target color?
9
Are spot colors limited and why CMYK mix is not treated same as spot color mix?
1
Why are laser printers worse with color than inkjet printers?
0
YCrCb colorspace: why does it contain only blue and red color information, but not green?