I'd like to make sound waves in curved shapes rather than staples. I have the staples already. Which is the best way to do it? 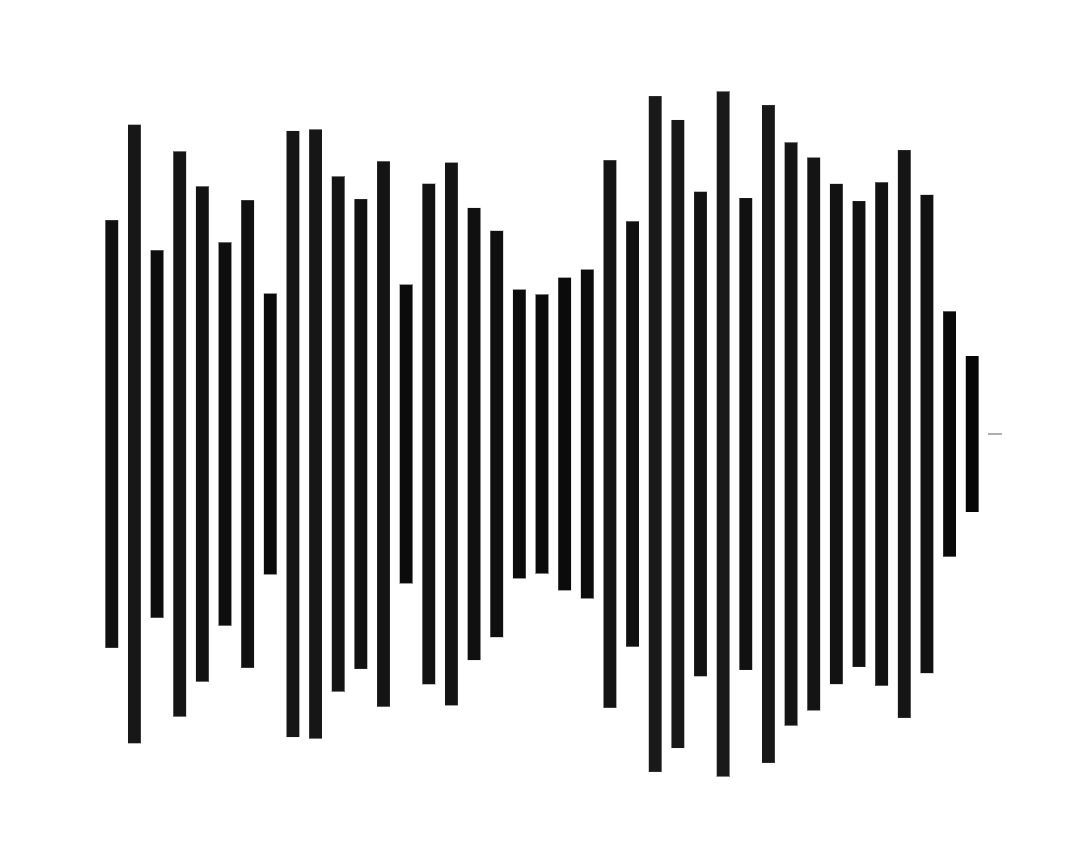 to this (but with only one line and no horizontal line): 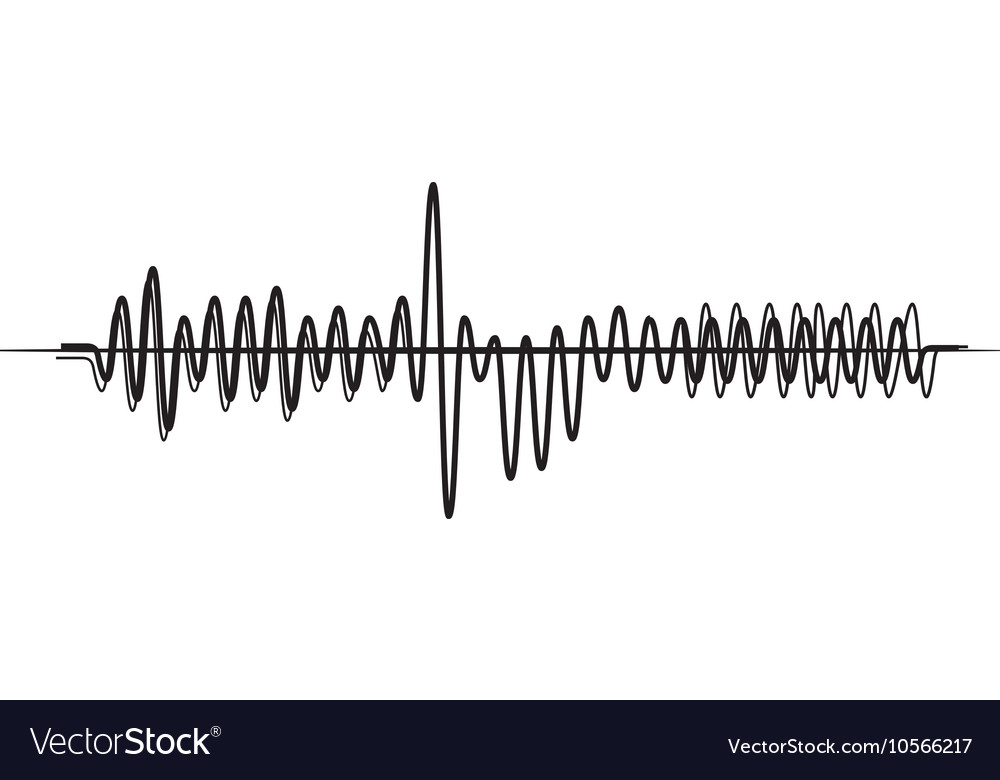 Does anyone know how to do it?

One way to start would be to map out where each line was using guides. 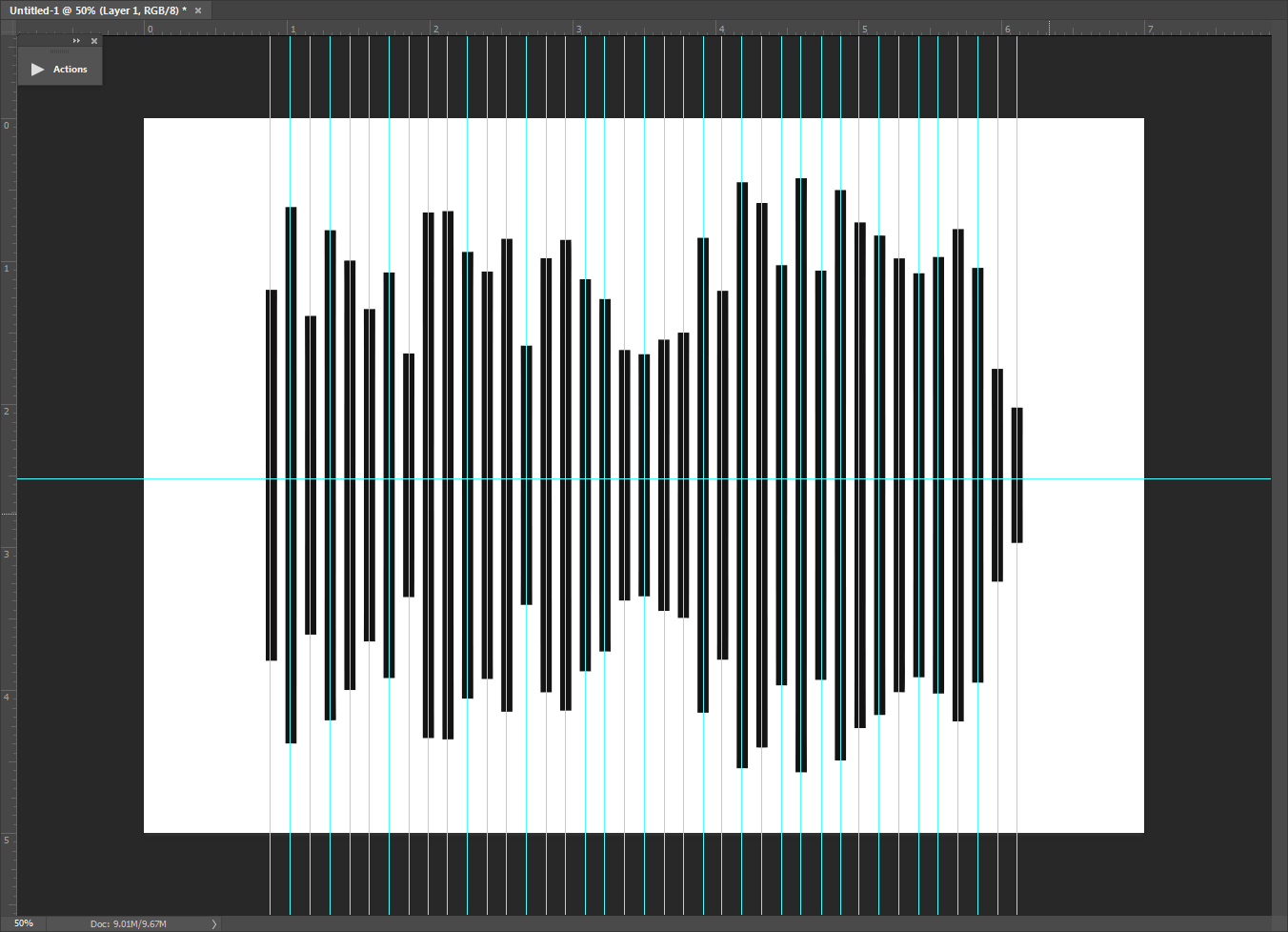 Then using the Pen Tool P, click to make a point. While still clicking hold Shift and drag to make an arc.

Continue this for all of the bars.

You can do the exact same thing as the Photoshop method with mapping out our lines but Illustrator's pen tool is easier to use than Photoshop's. 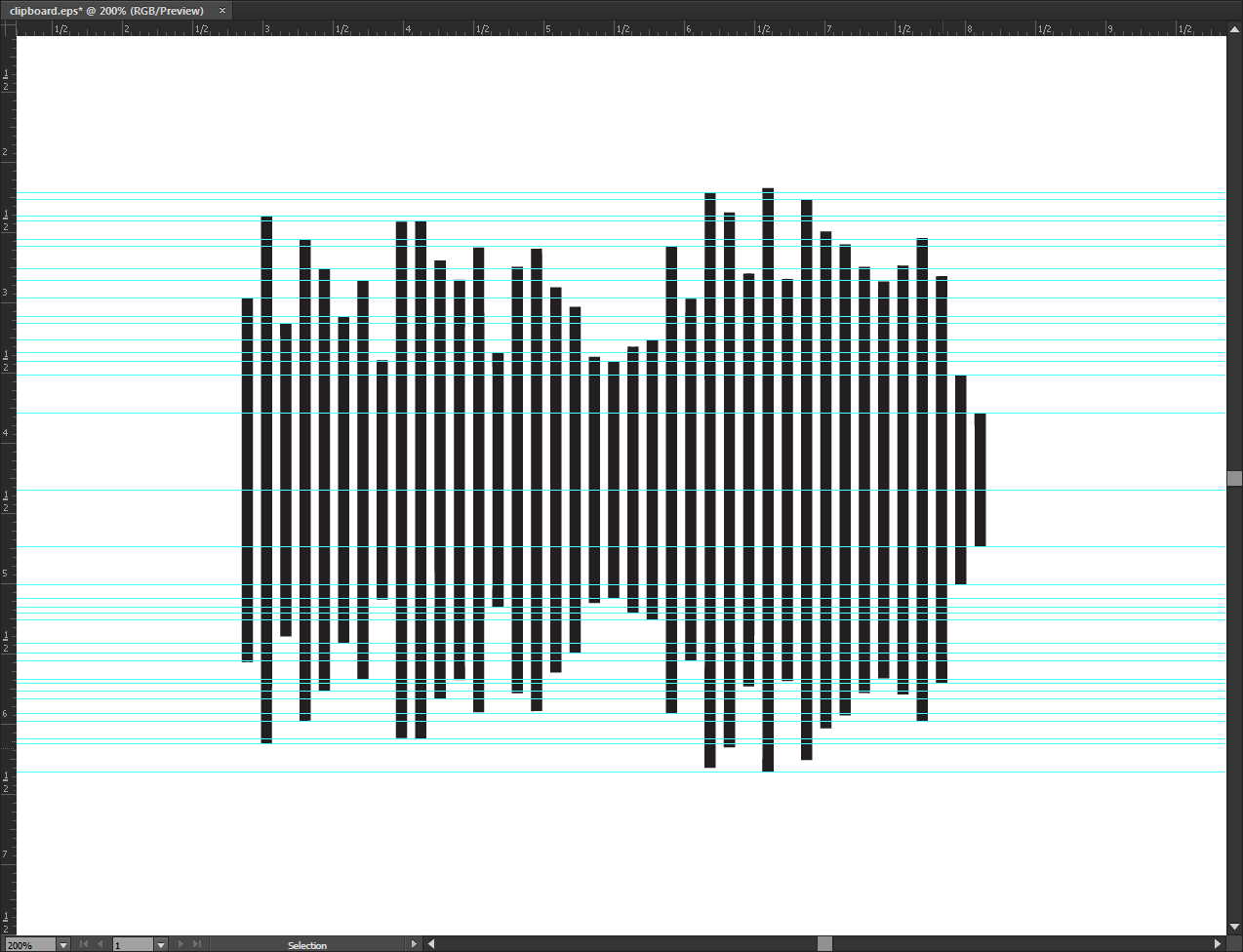 Alternatively, you can use the Paintbrush Tool B because it has line smoothing to freehand draw it or the Pencil N tool to freehand.

After drawing your lines you can use the Smooth Tool (found under where the Pencil is) to smooth out your lines.

This method might require multiple tries to get the line you are looking for.

I would go for the Pen Tool method in either Photoshop or Illustrator, Illustrator being the easier and cleaner method, to achieve your result.

Your staples obviously are not actual sound samples. I bet they are quite sparse sound level indications from a sound recorder. One staple presents maximum or average level during a practically short interval, say 1/10th of a second. But the data is about 4400 times too sparse when compared to actual waveform data. There's no technical way to deduce which was the actual waveform.

Some commentators have suggested that take the pen tool and draw what your art needs. They are right except if you are doing business and the customer insists the image must be exactly one certain sound. In that case you need that sound as WAV or MP3 file. Open it in a waveform editor (for ex. Adobe Audition if you have CC) and zoom onscreen the wanted portion to usable size. I bet you must have quite short or very bassy sound to see the actual samples as anything which resembles your wanted image.

Here's an example. It's about 0,3 seconds of music in Adobe Audition.

If it's ok, then you must copy it. If you are lucky, you can get a good screenshot which you must trace. Probably you must draw it, but try at first to autotrace it.

Musicians do not save nor print waveform plots. They operate with waveforms onscreen only to find the exact place of some unwanted click or a zero crossing to join two consequent sounds without a click.

Engineers need waveform plots. You probably can get one from some measurement analyzing program or a simulation program. Vector drawings you probably must draw by yourself.

ADD: Not true! Inkscape can draw it, you only order what to draw. Inkscape has in Extensions > Render a script named Parametric curves. If you understand it, you can make with it a graph which has a sum few sine functions with different frequencies, amplitudes and maybe amplitude envelopes. It will be easily rich enough and still well plausible sound waveform.

Understand? If you can read this X=t, Y=cos(3*t)+2*sin(t) and see the frequencies and amplitudes, go and use Inkscape's Parametric curves. You draw a rectangle, define the functions and Inkscape replaces the rectangle with the curve you just defined.

If you decide to draw it, take any program which has spline curves, for.ex Inkscape. Set a grid, have snap to grid ON and draw a straight horizontal line by inserting (=clicking) a control point in every grid step. Then drag the points vertically up and down. For more local richness insert intermediate points and drag them up or down. Before it either disable the grid or increase its density to make insertions possible.

See an example. Only a part of initial control points are moved and a couple of intermediate points are also inserted: 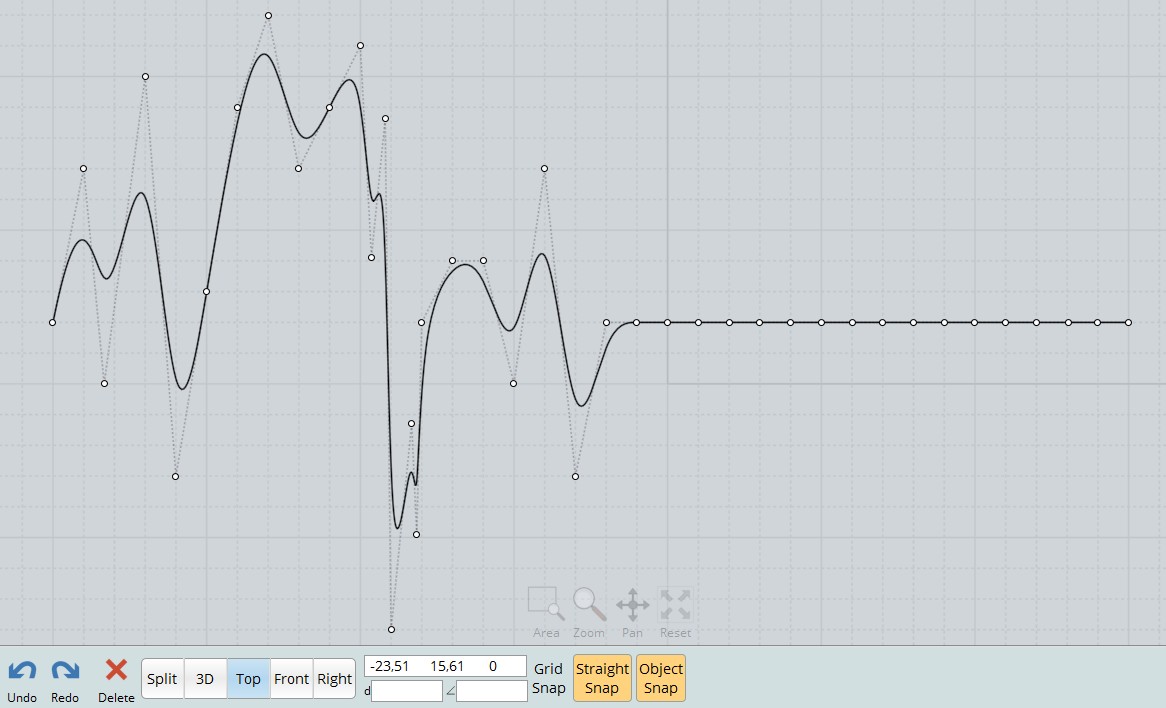 This was from a program named MoI. the next is Inkscape: 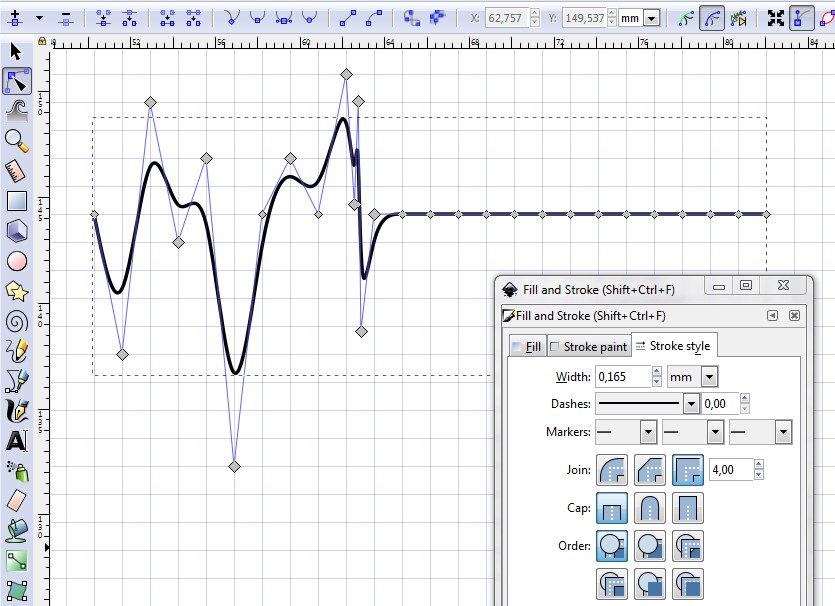 NOTE: Splines are practically a must. The other common vector curve format "Bezier" do not fit this job altough they both can express the same curves. Producing this with Bezier curves needs very high skill level, otherwise it's a nightmare. Anyone can move spline controls up and down.