How do I make a vector dotted ribbon?

I want to make a ribbon / wave of dots in Illustrator like the image below, but keep the perspective of the dots, so they don't look flat.

I have not had any luck using the blend tool or envelope distort tools. The dots always get distorted or look flat.

I made some tests using Illustrator and Blender.

Here are the results:

First I made the dots in Illustrator and saved for web in png transparent.

I made the modifications needed.

See the step by step in the image below:

Blending can be used to make a straight ribbon. One can create the length and the width by applying 2 blendings. But trying to make a curved one by creating the width with another blending unfortunately creates something which is very difficult to predict exactly. At least the final perspective should be seen in the beginning when creating the length.

Here's another way (Illustrator only) where the perspective can be adjusted at the end and the dots get some streching and squeezing as you adjust. 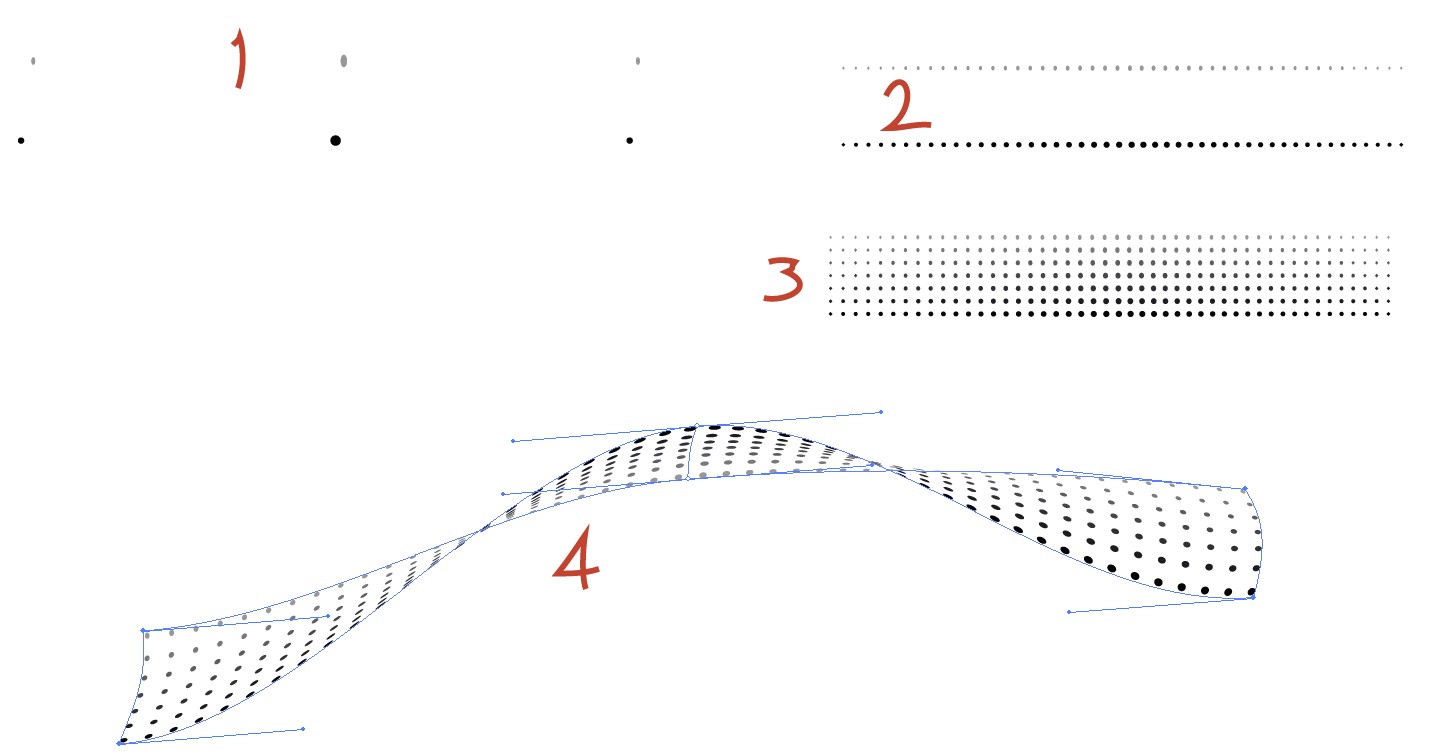 In image 1 there's some dots. The idea is to make the distant dots smaller and to have more grey color to reduce their contrast. In image 1 the dots are zoomed to bigger size to show them properly here.

One can think "of course in 3D it will be better". Questioner's original example has finely fading contrast and dot size. The ribbon has a slight curvature sideways. In simple 3D programs making them is difficult. Leaving them out destroys the effect, it's like an engineering drawing. An example:

Good result in 3D is possible if the texture is prepared with blendings in 2D and placed on rich enough 3D surface. That is discussed already in another answer.

Not the answer you're looking for? Browse other questions tagged adobe-illustrator shapes distort or ask your own question.

8
How can I add perspective to something using Illustrator?
1
Illustrator: "the selection contains objects which can't be distorted"-error
1
how do I stop perspectival alterations to Distort function in photoshop
0
How to make a similar text effect?
3
how to make a distort effect?
4
How to make an irregular blended circle effect?
6
Uniform Scattering with vector
0
How to replicate this effect (Illustrator distortion envelope)