How do I convert images of a page of text to pure Black & White and sharpen the text?

I'm a research student working with large numbers of archival documents. For speed when at the archives, I photograph the documents (with a decent but not fancy digital camera), producing colour .jpg files. For ease of reading, and to improve detail when printing some of the documents, I would like to convert the images to pure Black and White - not Greyscale - and enhance / sharpen the text. Ideally, I would like the finished image to look more like a photocopied page, with the background, any shadows etc faded as much as possible to improve contrast with the text. I've tried various things but can't quite get it there. Apologies if there's an obvious method I've missed - I'm a GIMP novice. See the sample image for what I'm working with. 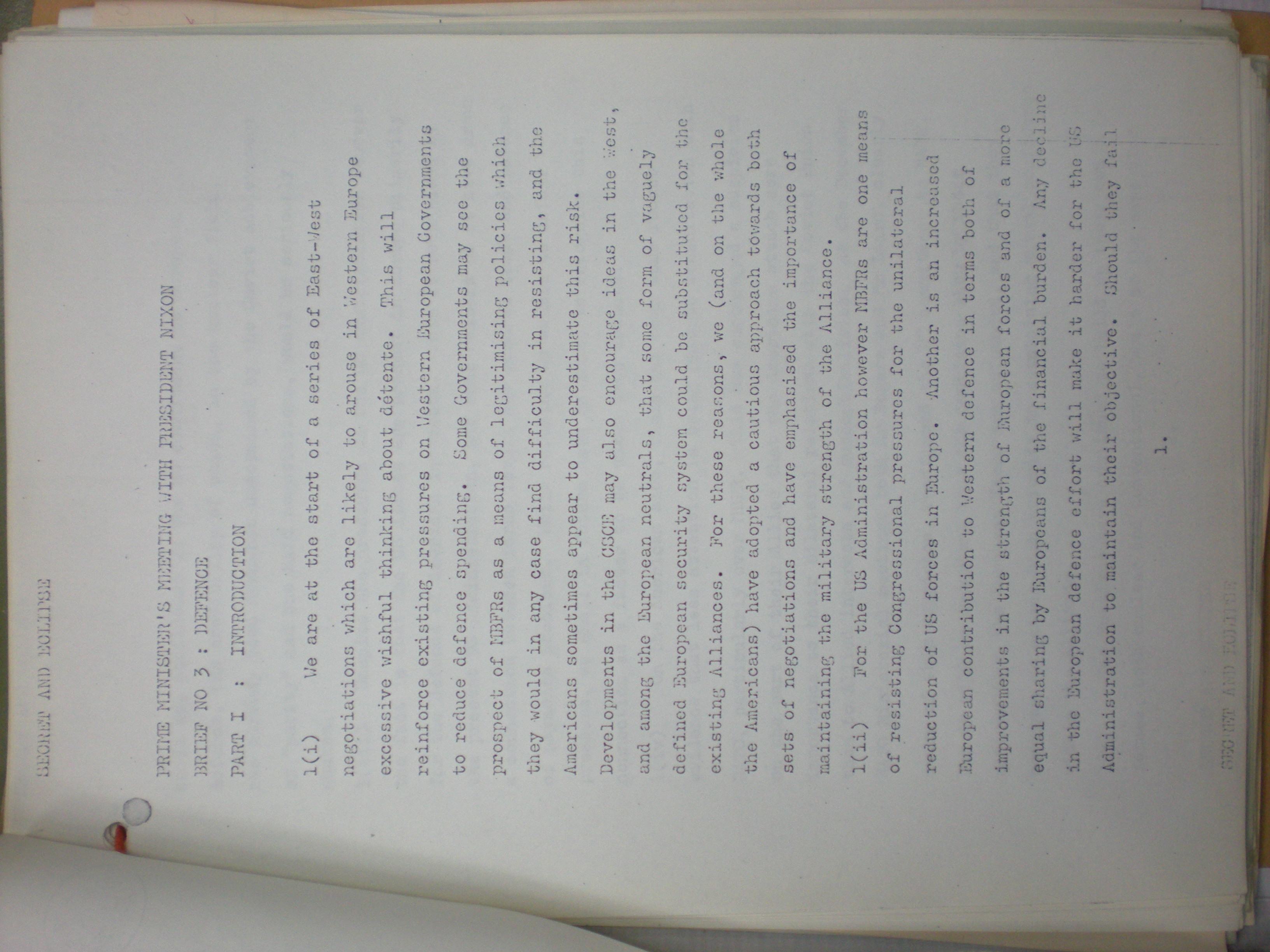 Adjusting brightness/contrast is not easy due to the uneven lighting.

First, to avoid color fringes, you work on a grayscale version of the image, either Image>Mode>Grayscale or Color>Desaturate. If you are using Gimp 2.10, you can also set Image>Precision to 32-bit floating point/linear.

Then you apply the following technique(*) to even the lighting:

In the resulting layer, the background is gray (around 50%) but is a more uniform gray. In the histogram, this is the big spike. You can then use the Levels tool comfortably to optimize the result. In the "input" settings: 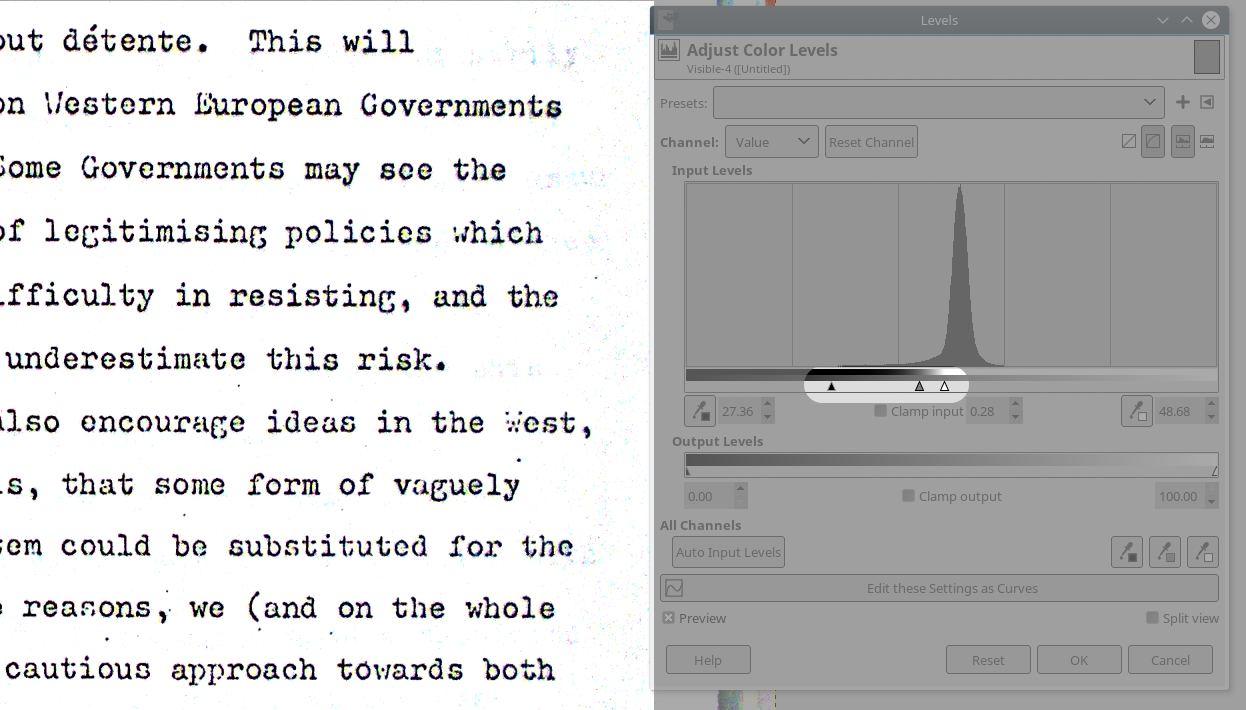 The text on the other side of the page shows through and limits a bit your ability to stretch contrast. Next time you take these pictures, bring a dark sheet of paper (ideally, black) that you insert under the page that you are shooting.

Simple contrast boost will not work because the light is uneven.

The uneven light can be to some degree flattened with high pass filtering. (It's not perfect because missing local contrast will not be fixed). Here's a split view scene from the high pass filter: 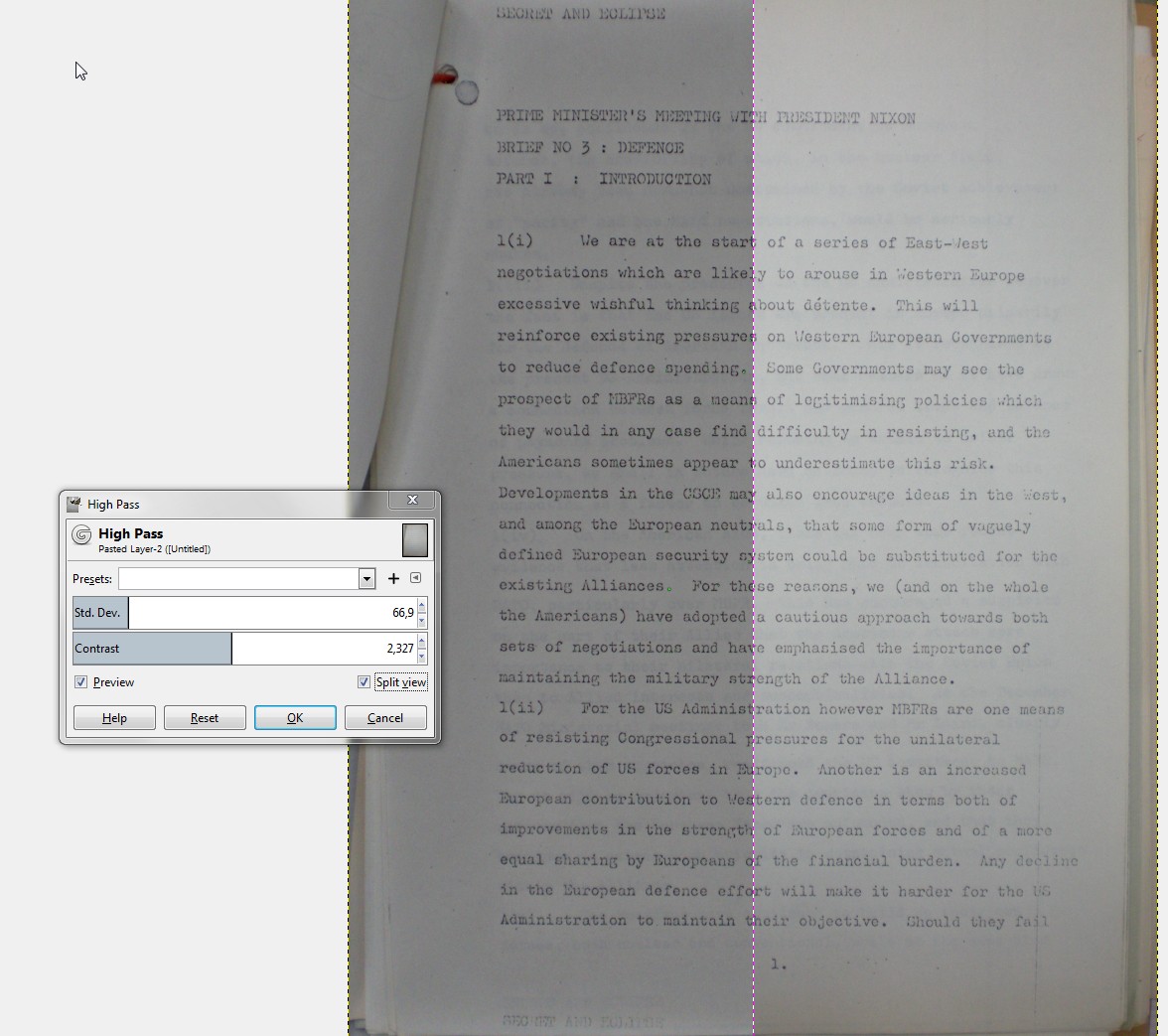 Applying curves can be used to increase the contrast. It unfortunately also boosts color differences and all unwanted crap at the edges: 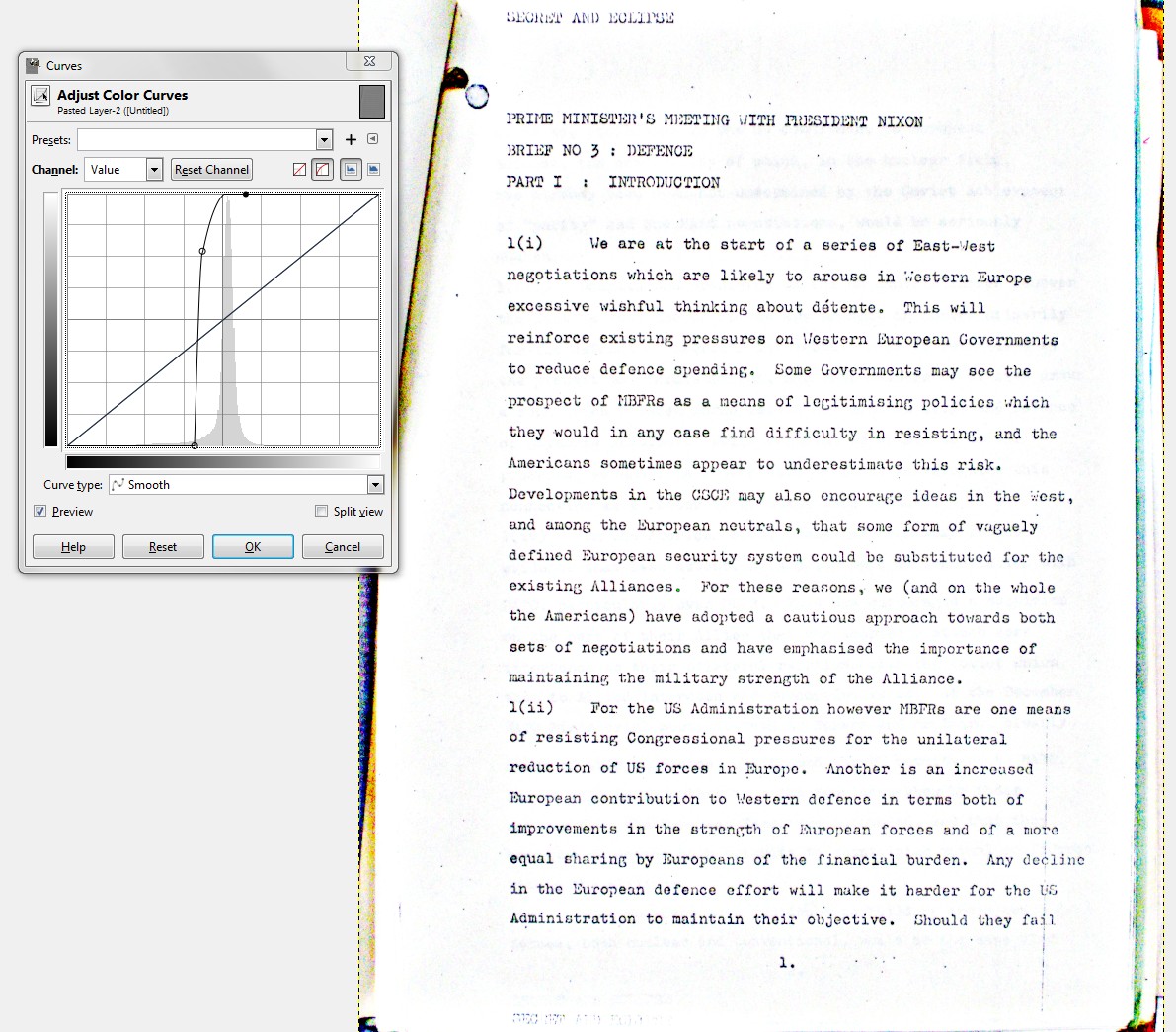 But the edges can be painted white or clipped off and the colors can be desaturated (not done here): 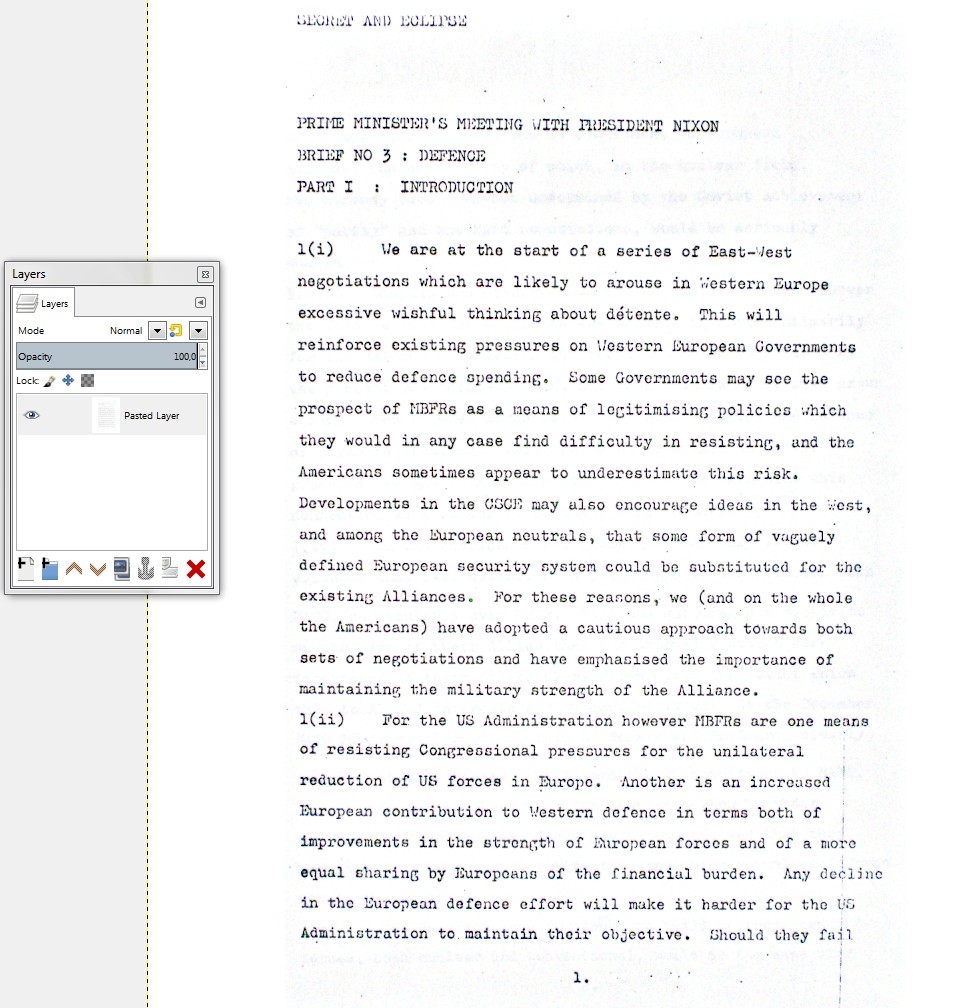 Filter "treshold" makes everything strictly black and white. I found that a steep curve which retains some grayshades, results better readability.

Desaturating in the beginning is in your case useful, because it prevents all color boosting which can be caused (OCR is different, desaturating increases errors). Colored dirt for example could be attacked only if the image was colored. In addition you wanted the result in BW.

This still isn't the best possible apparent contrast. Darker text is available with edge detection. It unfortunately makes the image negative, but the result can be inverted at the same time when the final contrast is stretched to limit with the curves. In the next example the image is at first desaturated, then it got Sobel Edge detection filtering and the screenshot shows the curves tool in use: 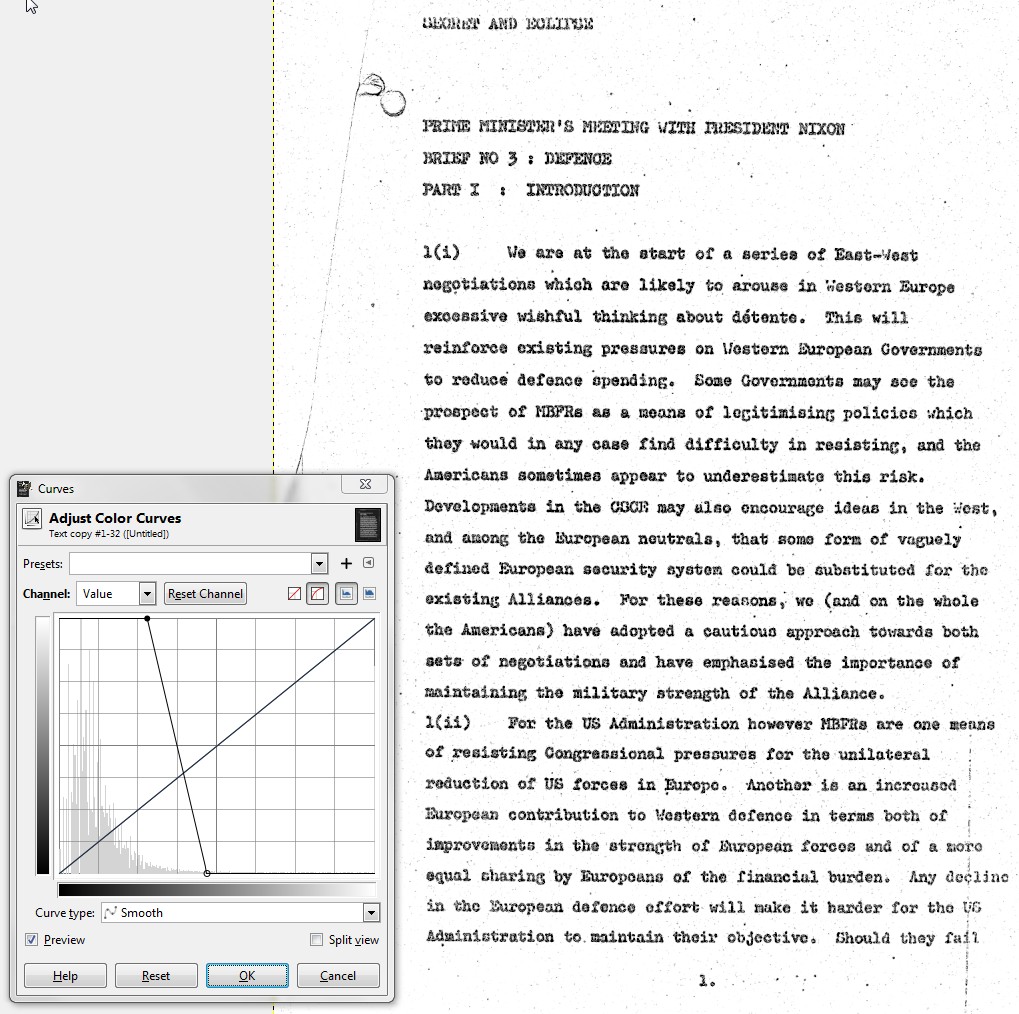 Enhancing the letters needs some pattern matching filtering that knows this is typewritten text and replaces the letters with perfect ones. That's OCR.

I believe at least Google likes to read your documents and do the OCR thing for you. As installable software there are commercial packages and FreeOCR.

I cleaned the edges of the output image and dropped it to FreeOCR. Here's the result. 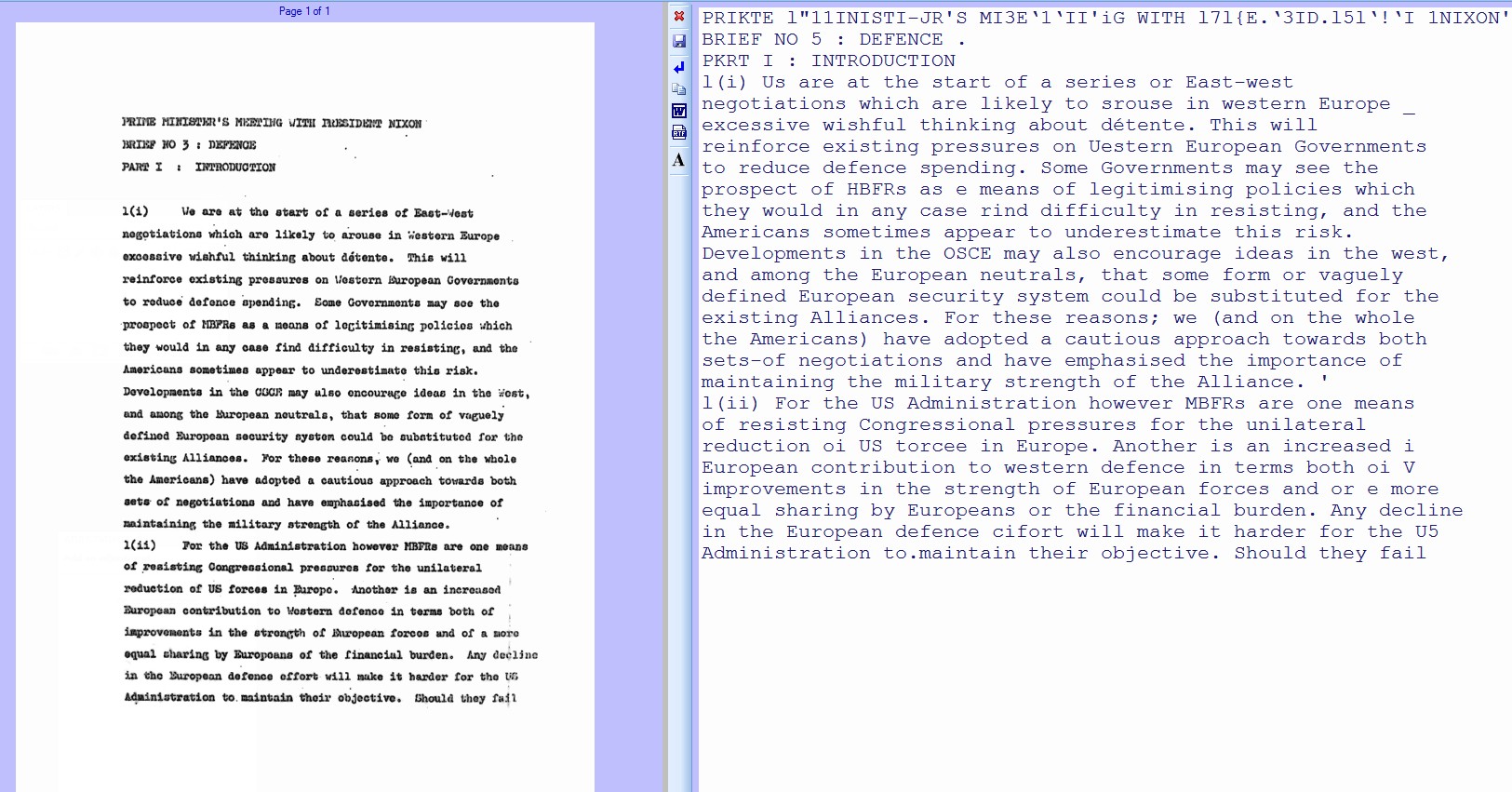 All extra spaces are removed. There's no control over it in FreeOCR.

You see that full check is a must, but it can still be faster than retyping. The next question is What file preprocessing is actually needed for succesful OCR, probably not the highest apparent contrast? 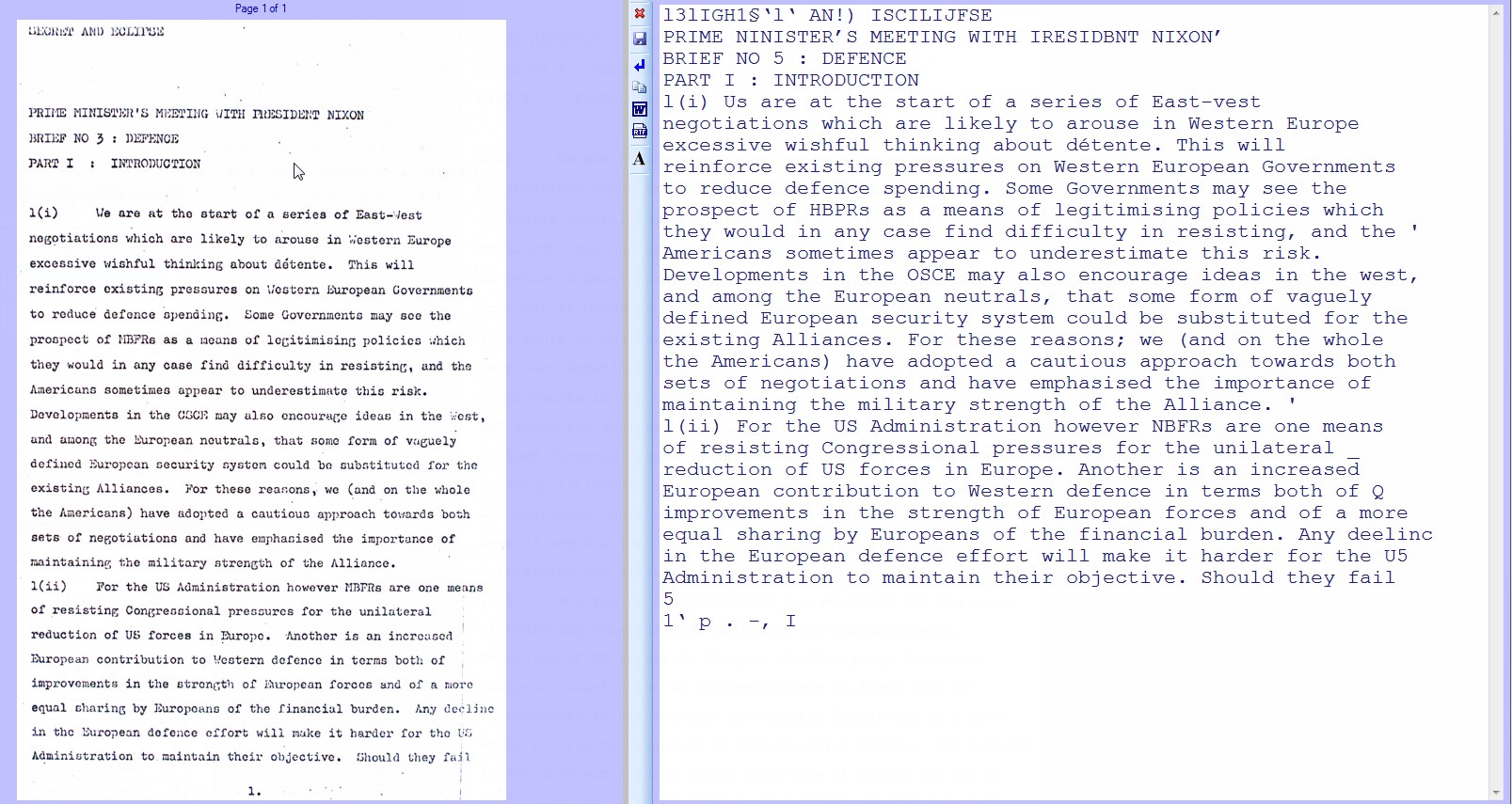 This is a complement to my other answer, using new capabilities in Gimp 2.10 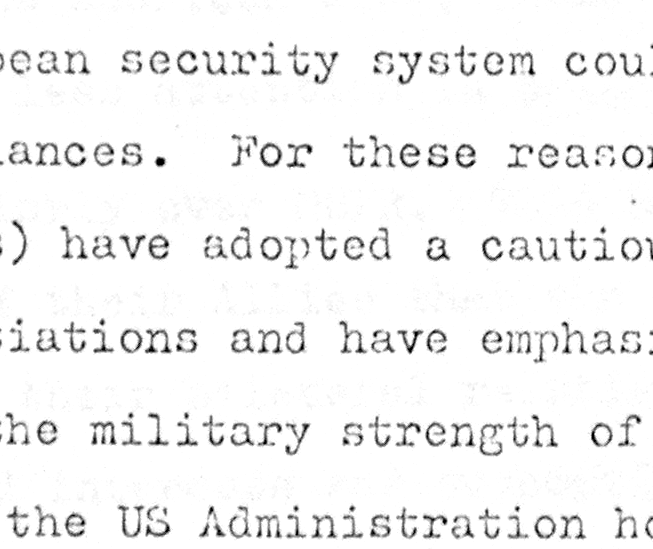 I did this by:

1
How to change background to white in other software than Adobe products?
1
How do I enhance the text from the back side of a scanned page?
0
How can I remove all blurs from text in multiple PNGs at once?

7
How to sharpen text in GIMP?
26
How to convert old scanned documents into black and white
31
Text not very readable on different image backgrounds
11
How do I handle large paragraphs of centered text?
11
How to convert color images to black & white in GIMP?
1
Razor Sharp, Pixel Perfect Text Export from Illustrator or Photoshop?
1
How do I enhance the text from the back side of a scanned page?
3
Remove text from black and white photo