Developing a page based on an Adobe XD comp.

I'm trying to figure out what would be the CSS equivalents for the following screenshots. 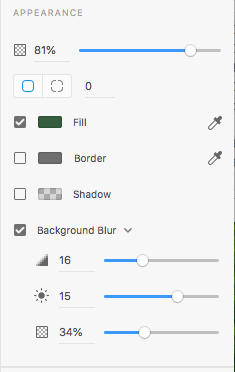 I tried filter: blur(16px) brightness(1.3) opacity(.34) but that does not give the desired effect -- also, while it does blur the <div> element of the box, the part of the background image that comes through does not get blurred, if that makes sense.

What you're looking for is backdrop-filter. You can achieve such effect using this code:

You can see a working demo here.

Not the answer you're looking for? Browse other questions tagged css adobe-xd or ask your own question.

26
How to create a non-destructive and reusable blurred/frosted glass effect?

5
Minor CSS issue
0
Svg transparencies don't work as CSS background
3
How to make a "highlighter" effect for text background in CSS?
2
How do I reverse a css export in Adobe Fireworks?
2
Best image size for responsive css background image
13
Is there a "generate CSS/HTML" feature or plugin in Sketch app
5
Convert svg linear-gradient to CSS linear-gradient (Adobe XD)
2
Adobe Photoshop method to give results equivalent to 'Background Blur' in Adobe XD