What icon can represent "other" or "miscellaneous"?

I've made a few icons representing different categories like "park", "nature", "sanitation" etc. I'm now officially stuck on the icon for "other" or "miscellaneous". This icon is going to represent all other categories that don't have their own icon.

Maybe an icon with three dots or something, but that doesn't feel clear enough. Any suggestions?

The only restriction is that it can't be language specific (writing "Misc" or something).

The design of the icons content depends on the destination concept. The question does not clarify what the icons are for: a web, an application, a menu, a set of icons for sale...

The actual symbol exists for what you want to identify and appears in the International Symbol Dictionary to indicate an otherwise unspecific (miscellaneous?) place of interest. Some interpret it as a view of a castle from above, while others trace its heritage to the Bowen knot. It was rarely used and fell into obscurity.

It’s called the command key, the splat, the pretzel, the propeller, the cloverleaf, or the squiggly key: the cryptic ⌘ that Mac users tap ten times a day. The symbol is familiar yet cryptic, but like everything Apple, there’s a legend behind it.

Apple chose the icon for this and appropriated it for their "Command" key to replace the logo originally appearing there. It was the familiar clover-leaf design.

The Apple Command key (or, as you might better know it, ⌘) has a beautiful and clear history. Originally, the ⌘ key was an Apple symbol instead, but Steve Jobs thought that using the Apple logo as a keyboard shortcut in the original Macintosh’s menus was “taking the logo in vain” so he tasked the great icon designer Susan Kare to find a solution. The symbol she chose was the traditional clover symbol we all know today, chosen because it is commonly used in Scandavaniva to indicate a tourist attraction or place of interest.

Since that's what it's for, use it. Why reinvent the wheel? Why create redundancy? Take back the design; it was grabbed from our legacy. Justice for all!

I know you asked for an icon that isn't language specific, but the idea of "other" is an abstract concept, and rather difficult to put into pictures. I can't think of anything specific that would cover that meaning exactly.

Perhaps an ellipsis ... would work, certainly for languages which use the Latin alphabet. Technically, it represents an intentional omission rather than "other" - but the idea is somewhat similar. An arrow is also another possibility, in the sense of "next" or "another". Or if miscellaneous/other in the sense of "unknown", then perhaps a question mark. If in the sense of other options/menu items, then a hamburger icon ☰ might even work.

I suppose the choice would depend on what it is being used for, which you haven't really mentioned.

Search the term 'other' via the Noun Project for a few more options maybe: https://thenounproject.com/search/?q=other 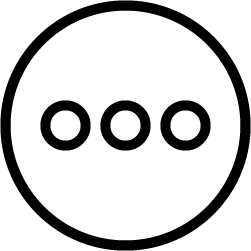 I do so appreciate the deep analysis, however, the reality is it doesn’t matter because the “people” will decide. Either they will like it, comprehend the word “miscellaneous”, and proceed to recognize and use the symbol. It will then become popularized and in the system. All you have to do is: Create a symbol. Label it. List it, add it, post it…however you mainstream your creations, and there you have it. I kind of like a simple spiral. Easy to recognize, it’s already in most font, AND it’s easy and fun to use in written, everyday procedures…We need a symbol for miscellaneous, misc., …

I think "three dots" (vertical/horizontal) or a "hamburger" (three lines) is clear enough. It's a common pattern. Users - at least most of them - know what does that mean. However, if you are using these icons in a place rather than a link or a button (which is clickable and perhaps opens a page or filters current data) or think it doesn't match your icon set, you can use a mixture of other categories:

For example, imagine you have a grid showing different vehicles in these categories: cars, airplanes, tanks, boats, trains; and the icons are simple visuals of every category: a simple car, a simple tank, a simple airplane... . Most of the vehicles can be put into their corresponding categories, but there are some like "Speed Demon" which doesn't make sense to put in "car" and you would like to put it in the "misc" category. In this case, you can have an icon showing an exotic (I mean strange, not supersport), imaginary vehicle standing for that. Or maybe an icon having multiple vehicles in it: a car with a tank behind it and an airplane flying over them.

2
How can I design a domain-specific "actions" icon?
6
New generation of 'Edit' icon that is not a pencil?
1
Icons to represent "browse"
7
How to graphically represent time
3
Easy, Fast, Secured Icon Recommendation
2
Classification schemes for icons
2
How to convey the concept of "Clear Communication" with an icon or simple illustration
2
Actual size, fit screen, fill screen icon ideas
0
How do you represent the concept “rate per hour” visually or as an icon?