How do i create this rough black effect in Photoshop? [closed] 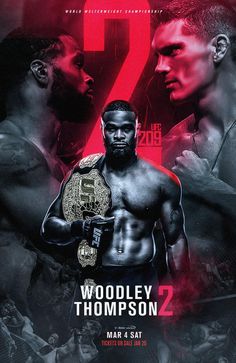 I want to create this blackish rough effect on fighters and i have tried different things but I'm unable to achieve this precise effect. Need help here!!

How this effect could be achieved? thanks 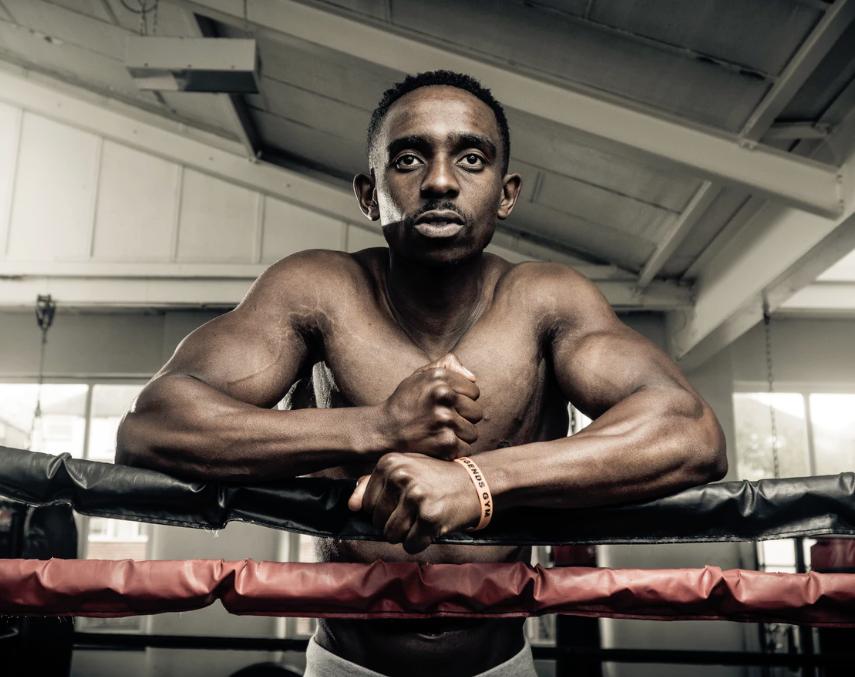 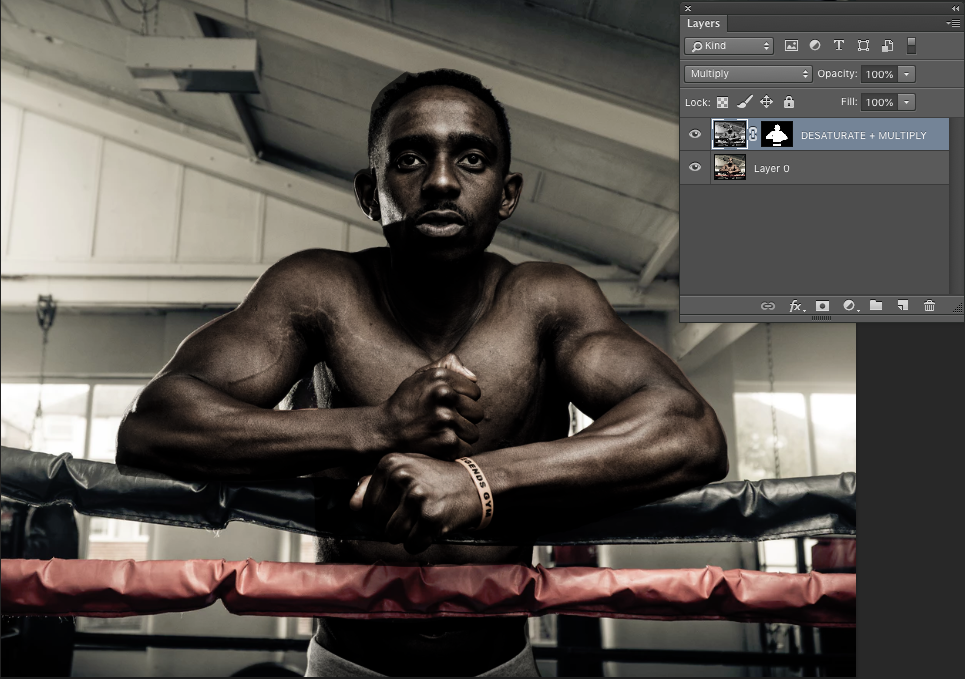 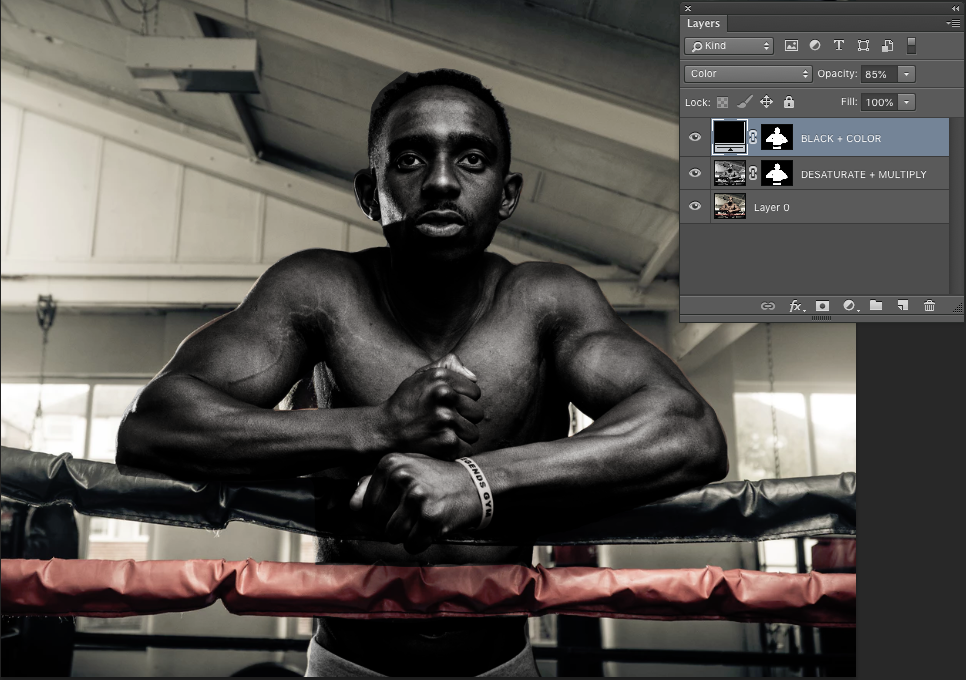 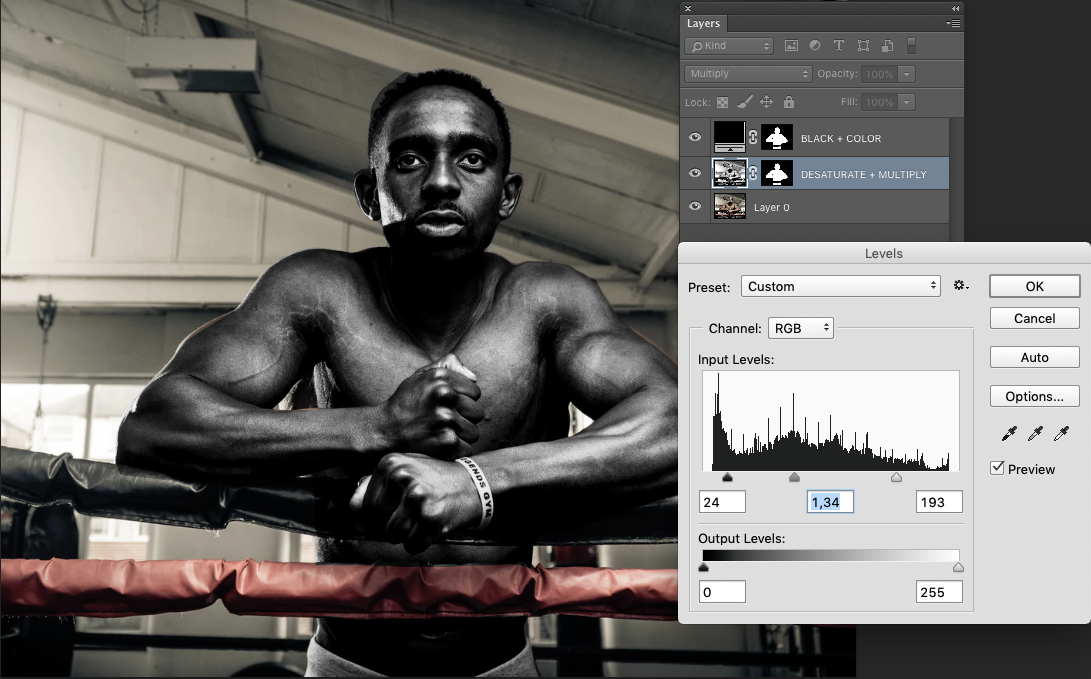 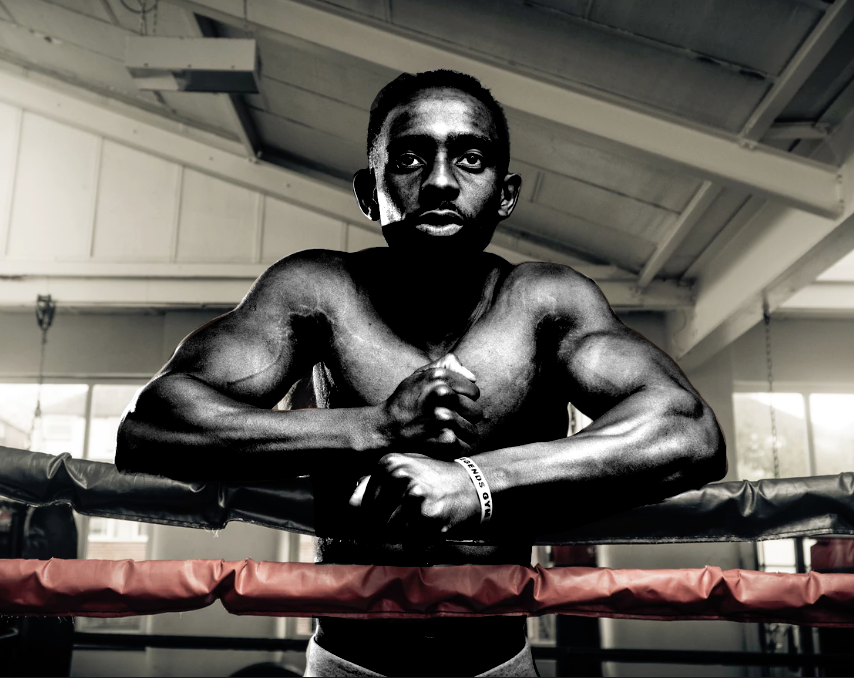 I intentionally took the opposite workflow approach to contrast with and show an alternative workflow to Danielillo's excellent answer.

This is why I choose to use positive selection of the fighter, masked adjustment layers for him, and then for a bit more pop, I did the same thing with the wristband.

My goal was to get a slightly more "statuesque" feel from this base image, crushing the mid tones a bit more into the darker, implying hopefully an almost metallic or polished marble type of highlight, and therefore implying more "hardness" to our fighter, but hopefully without losing too much in-shadow detail.

In my case I used Affinity Photo, but the same basic approach would work just as well with Photoshop.

I used the selection brush and refined edges to get a good selection set for just the fighter himself, isolating him from all other elements, including his wristband. 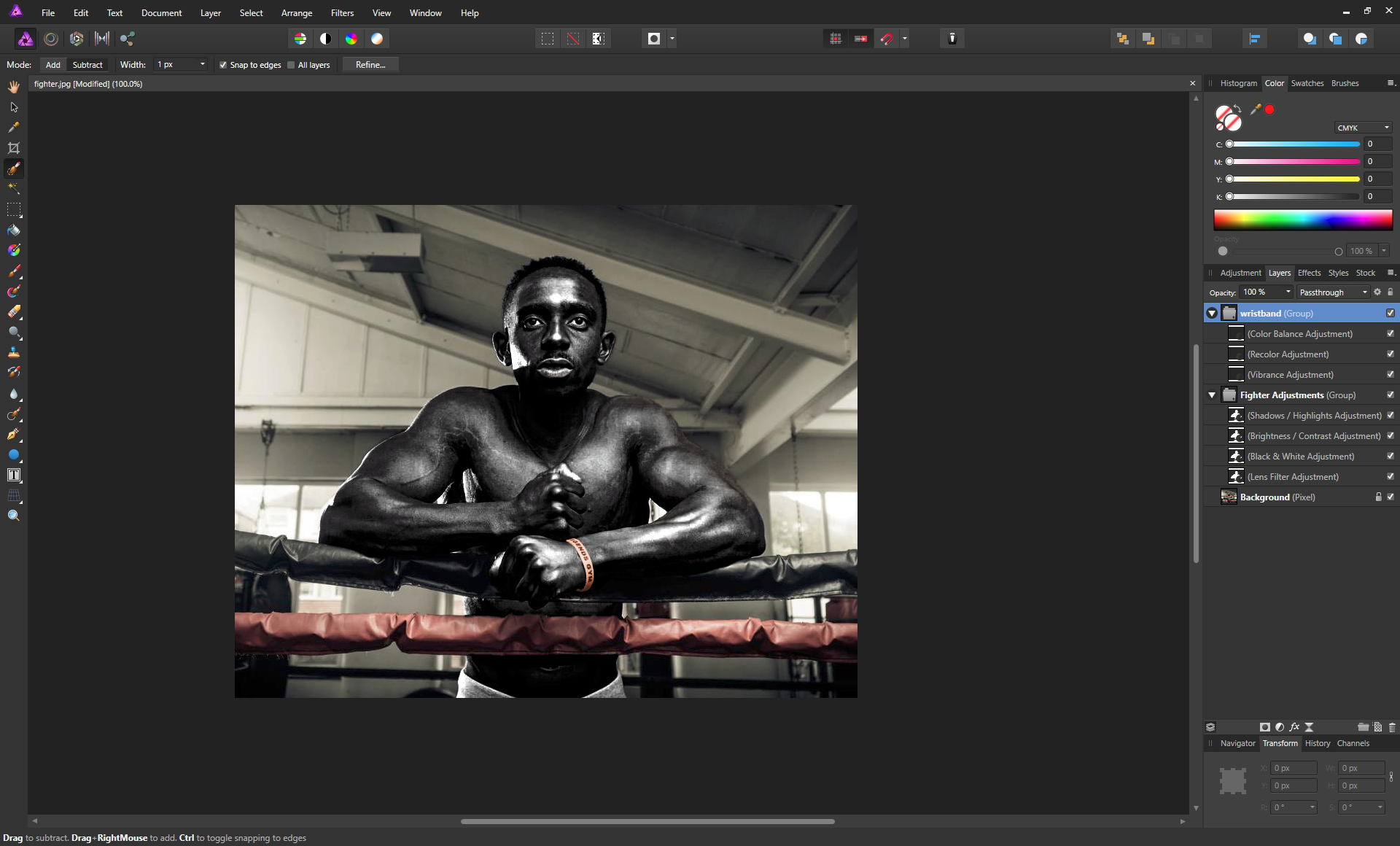 I applied a simple Black and white adjustment layer, setting yellow as my strongest white, setting red as mid-dark, and got to a pretty good base tonality right off the bat. 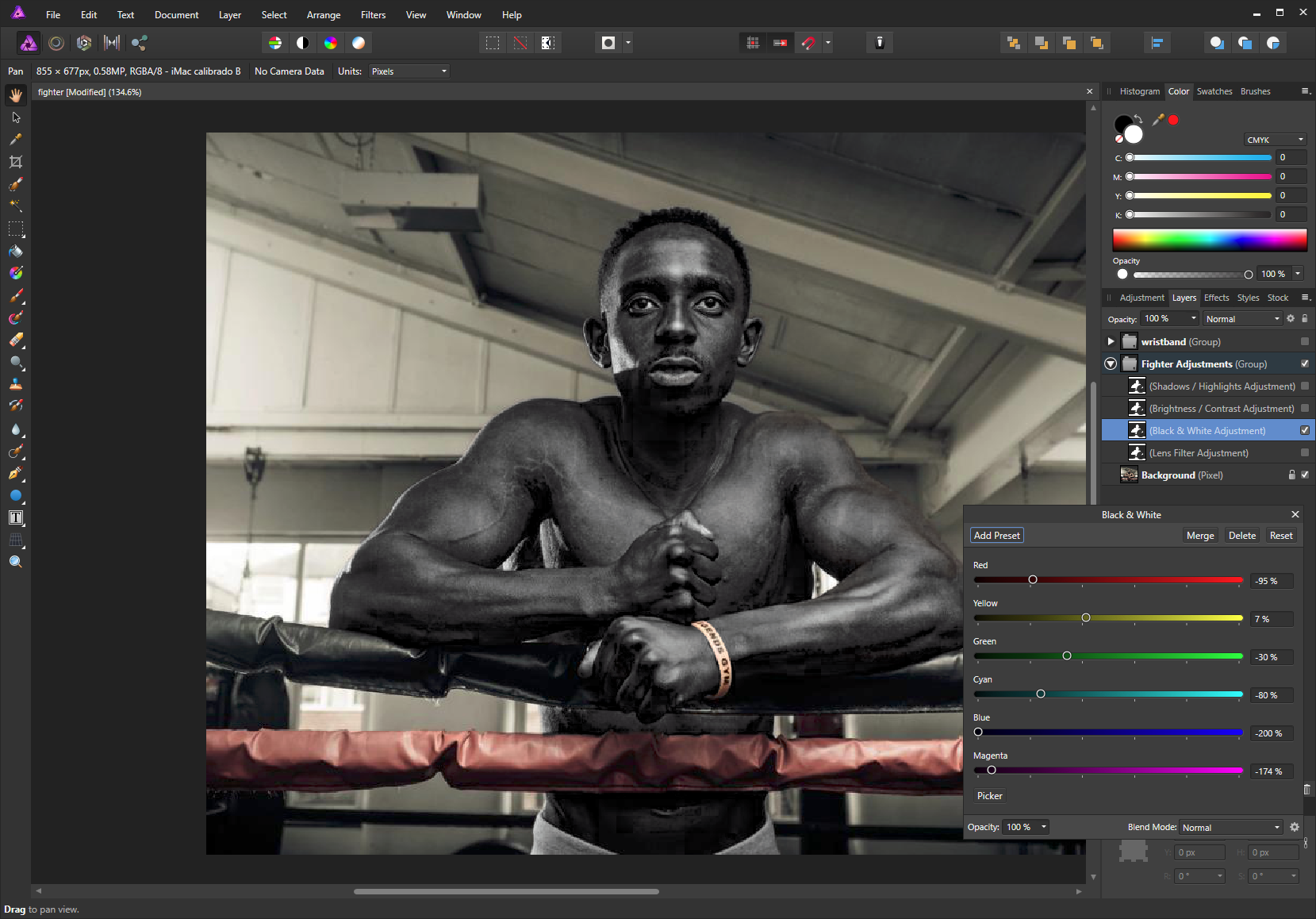 Then I added a brightness-contrast adjustment Layer to give more pop and control the contrast interactively. 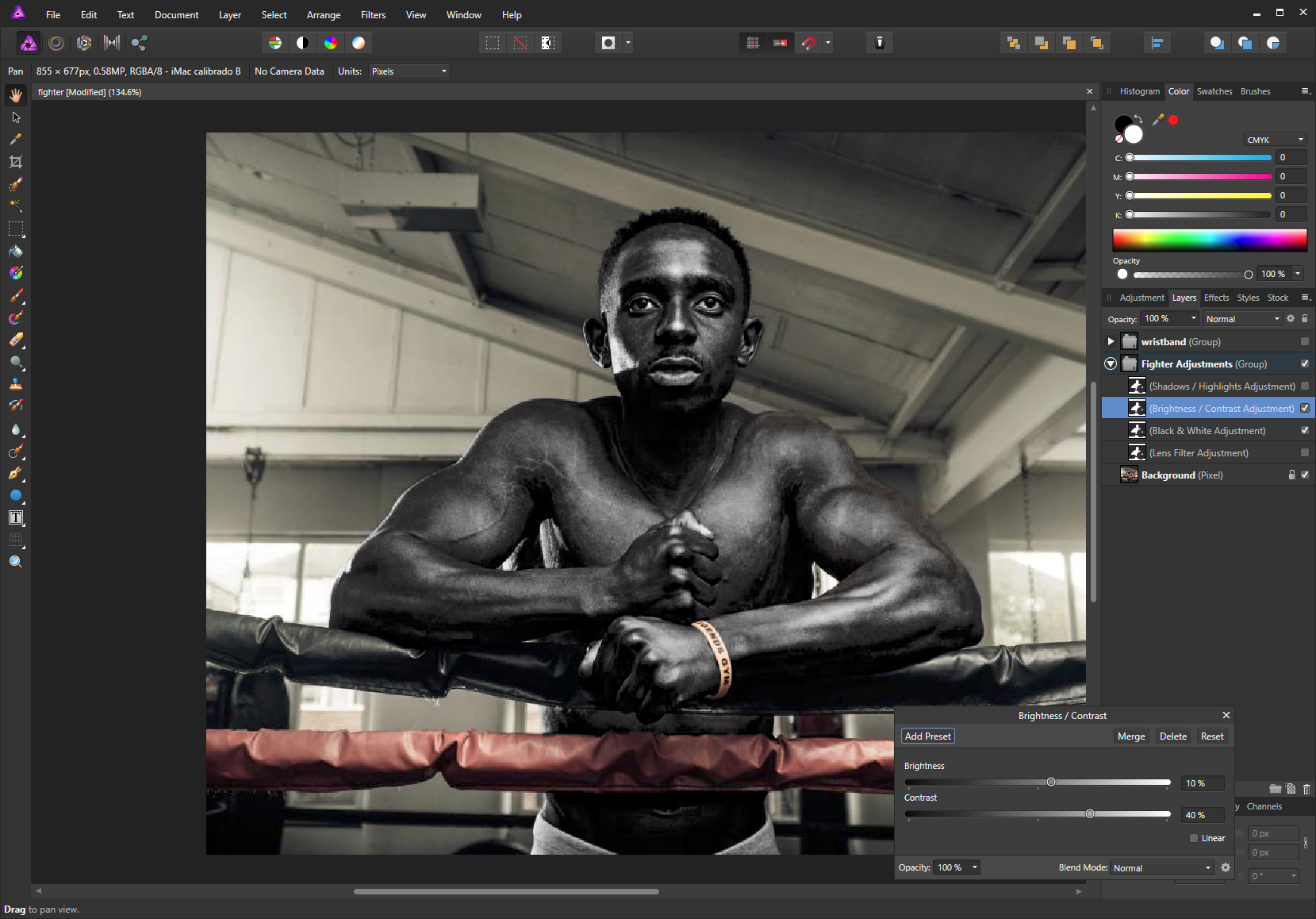 Then I added a shadows-highlights adjustment Layer to tweaks shadow depth and highlight pop and give those shadows a bit more high-def feel, but with better control and subtlety than the straight contrast adjustment. 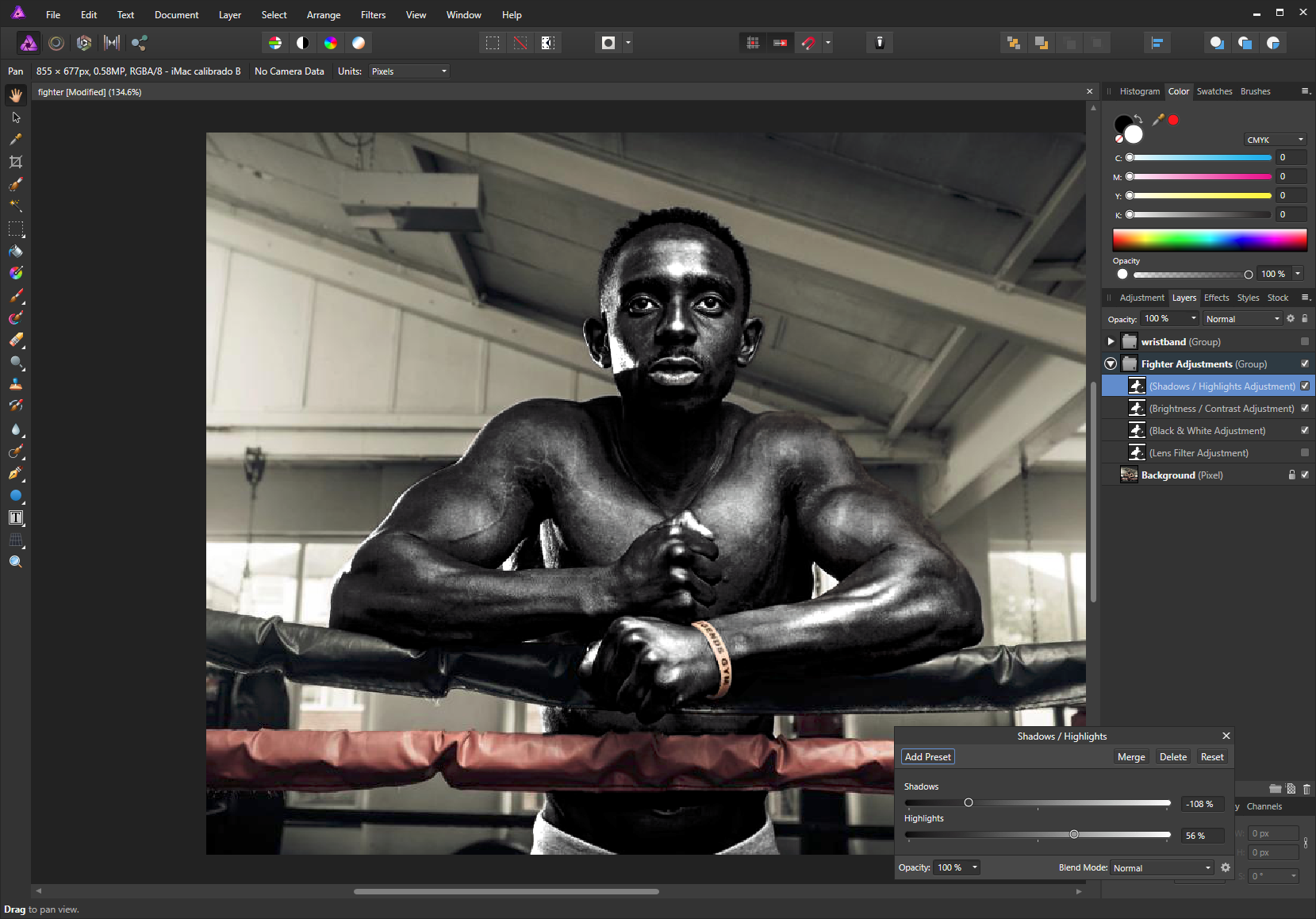 Then I added a lens adjustment Layer - this one's a bit subtle but it allows a slight shift of underlying tonality. 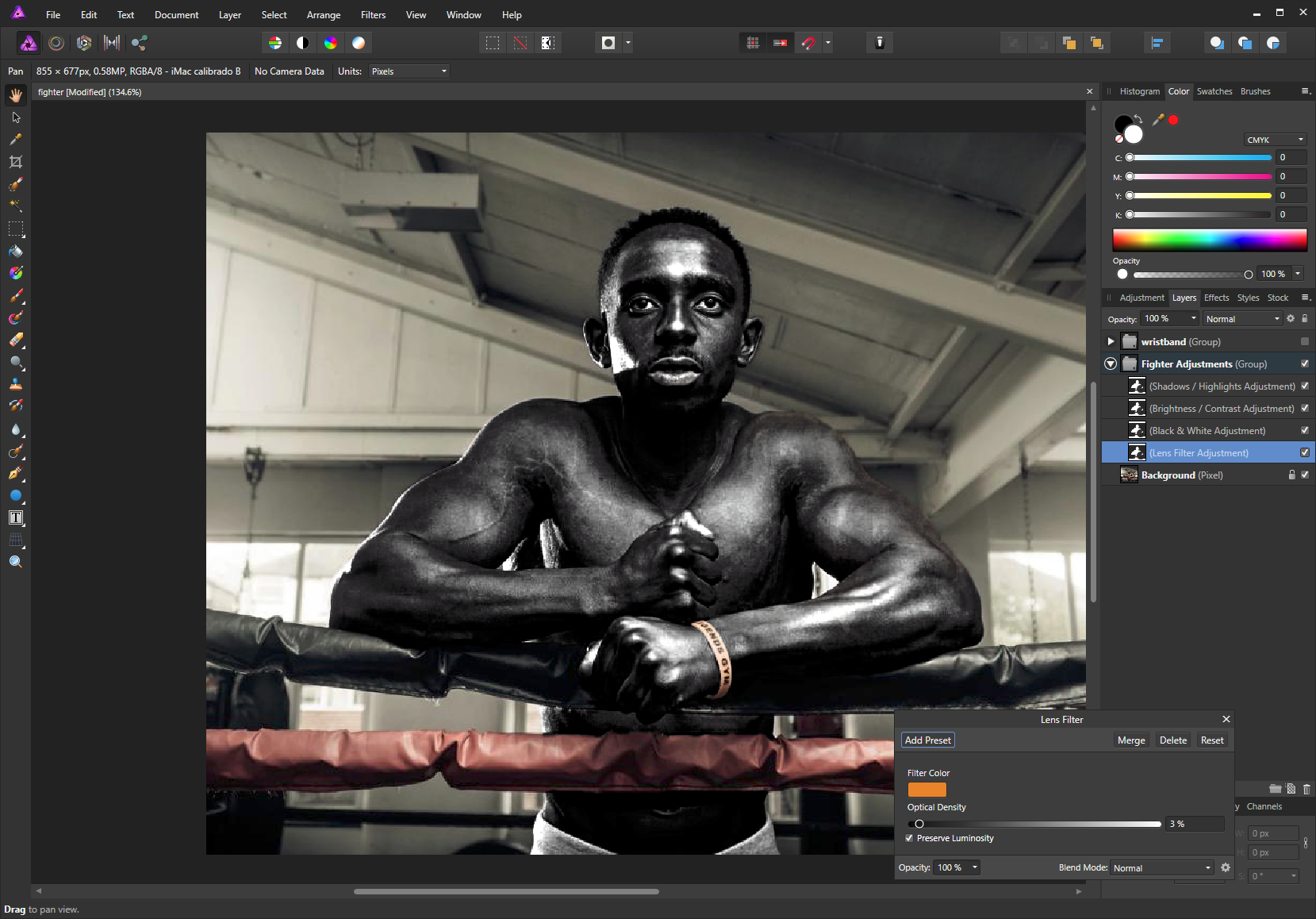 At this point I was quite happy with how the fighter himself has turned out, relative to our OP's example poster, but I wasn't happy with how his wristband was looking in comparison and how it seemed a bit washed out compared to the rope pads.

Knowing I was thinking of having a series of differing adjustment areas, one for the fighter and most likely one for the wristband and maaaybe one for the rope pad, I nested the fighter's adjustment layers into a named group (with opacity at Passthrough) to make managing these simpler and clearer. 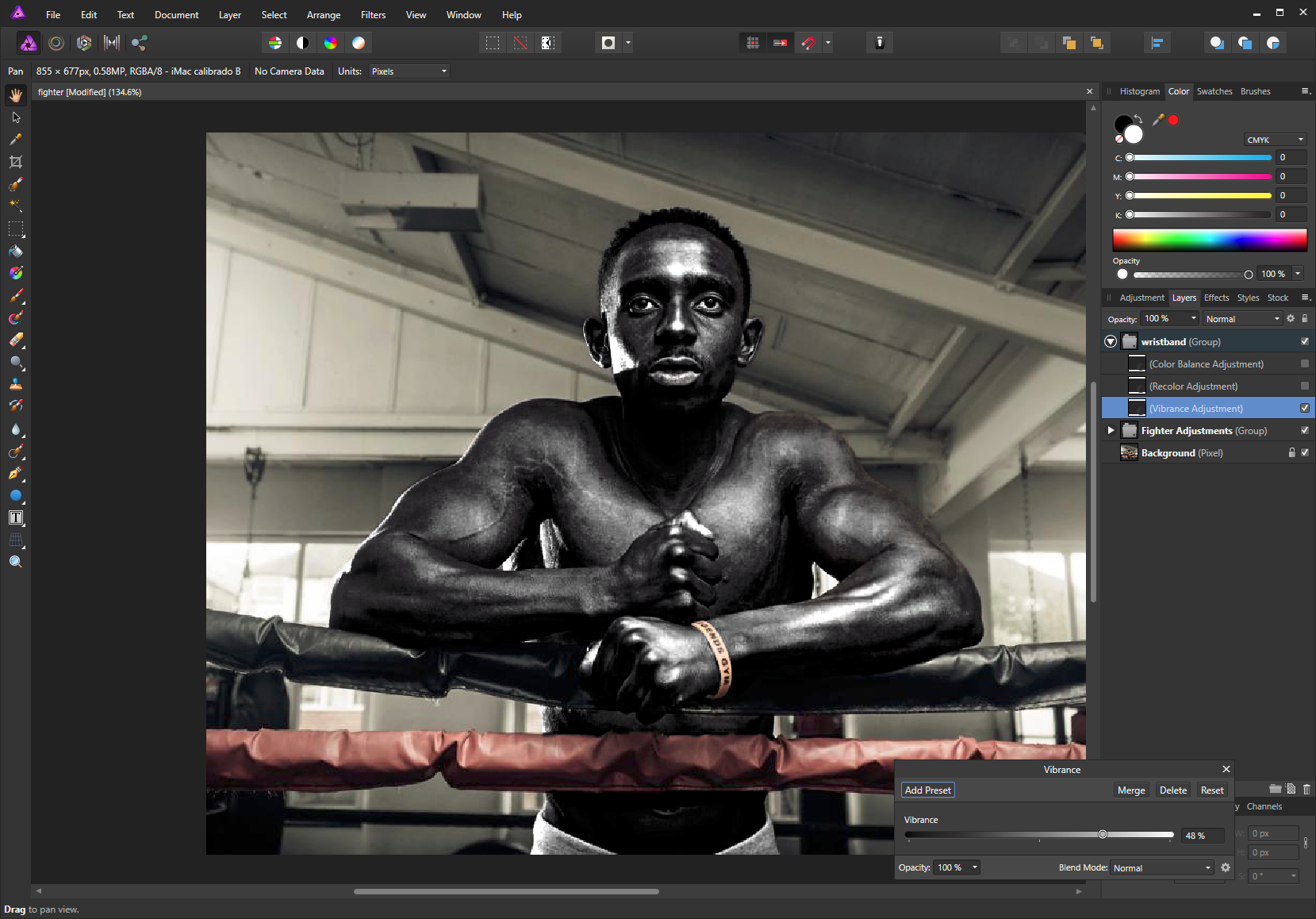 So then I decided I wanted to swing the specific hue of the wristband a bit closer to the hue of the rope pad beneath - to limit the overall colour palette and give that accent colour a bit more weight in the composition - so I added a recolour adjustment layer. 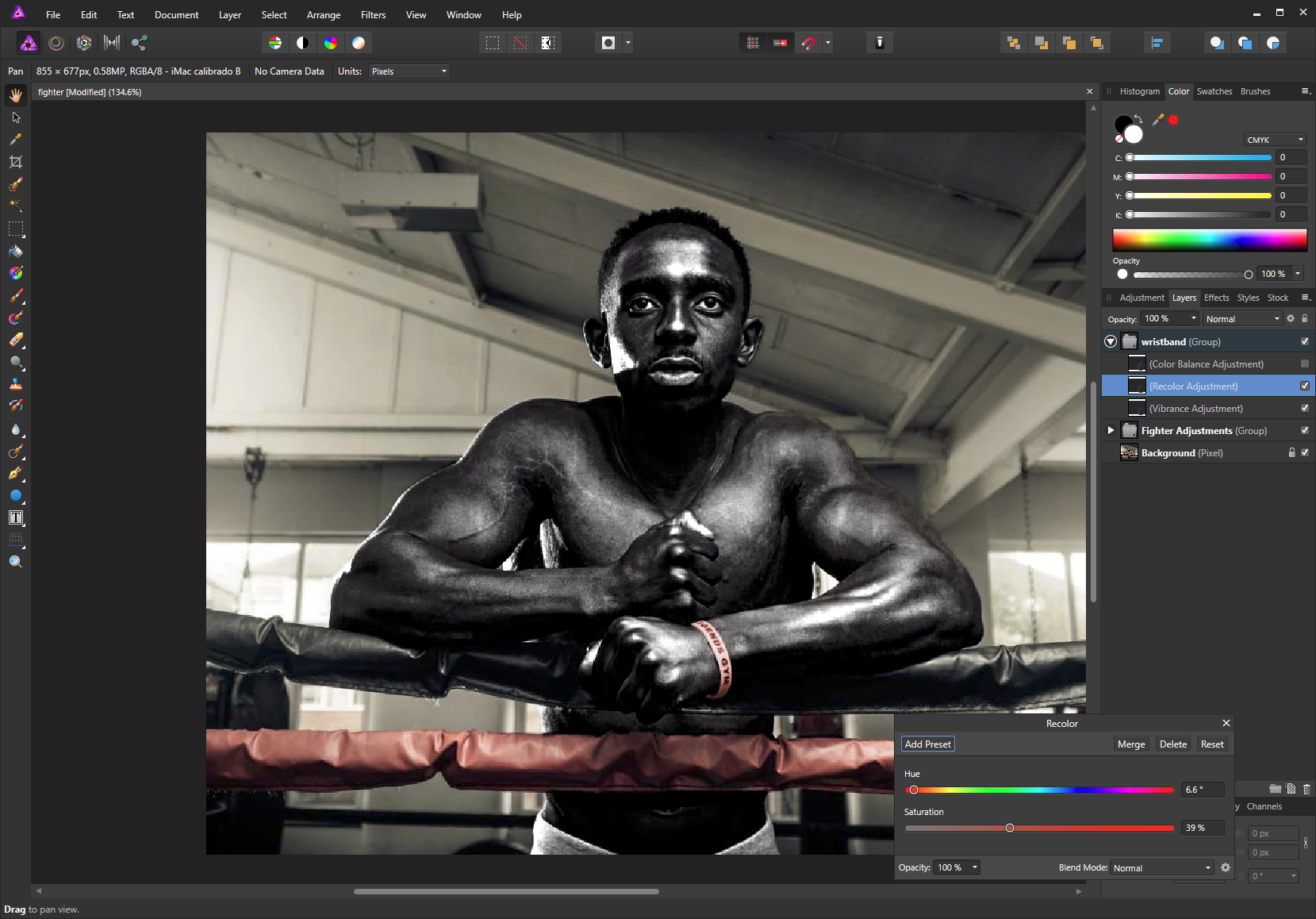 I then completed my desired hue transition with a colour balance adjustment layer (note that all of these remain live non-destructive and re-editable) and felt like this was about where I wanted it for this context. 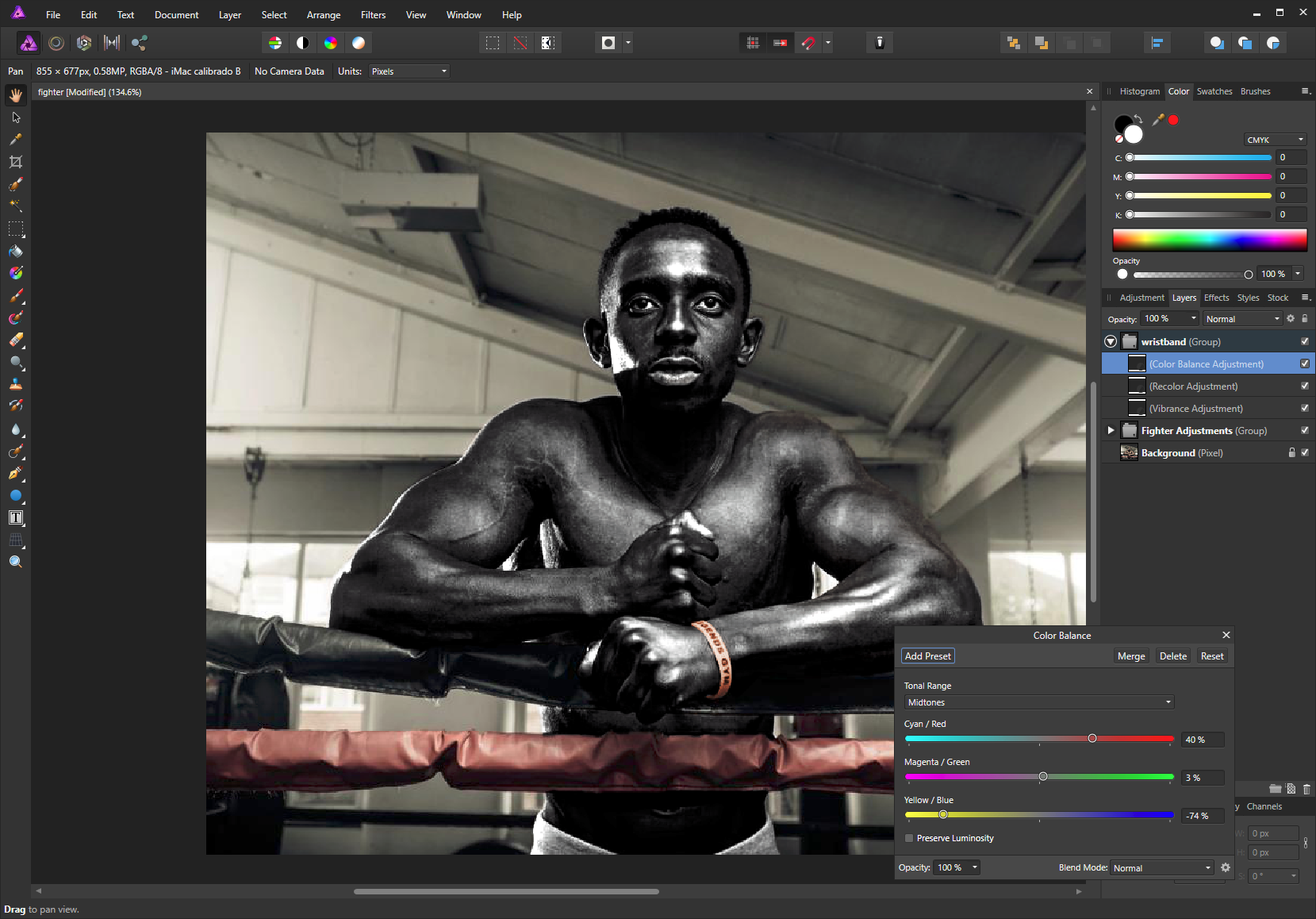 And here we are with the final image: 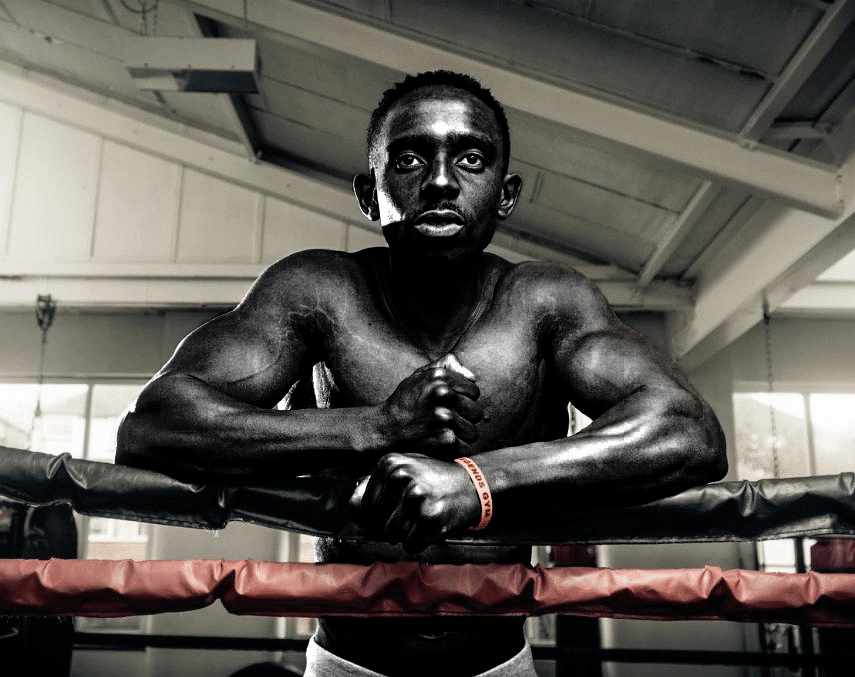