The logic of kerning classes

I am a beginner with FontForge and I would like to know:

The idea behind kerning classes is that they should contain glyphs that kern similarly or ideally identically in one direction (left or right). By grouping them together you avoid redundant work as you only have to decide how one of the members of the class kerns and then the others will automatically behave the same way.

For example, in most typefaces, you would kern the combinations Tc, Td, Te, Tq, and To.¹ In many typefaces, the kerning (more specifically the space you remove) would be the same or very similar for all of these letters since it the shape of the left bowl is the same or similar for them. By putting c, d, e, q, and o in the same left-kerning class, you only have to set the kerning for these combinations once, and the same applies to all other left kernings of these letters, e.g., Lc, Ld, Le, Lq, and Lo. Moreover, you could also put T in a kerning class with other letters that have a similar right side such as Ţ and Ť.

However, the first thing you describe (“the first class I created is composed by all glyphs to kern together with V”) does not really make sense, since e.g., while both VA and Va may kern similarly, LA and La kern differently and thus A and a should not be in the same kerning class.

From a mathematical point of view, an ideal kerning of n glyphs is described by a huge n×n matrix. Determining all entries of these matrix individually is a huge amount of work. Kerning classes exploit that for some groups of glyphs, you can predict that all rows (or columns) will be identical and reduce the problem of determining the kerning between all pairs of glyphs to determining the kerning between all pairs of classes.

For example, a subset of your kerning table covering the above examples could look like this (with and without kerning classes): 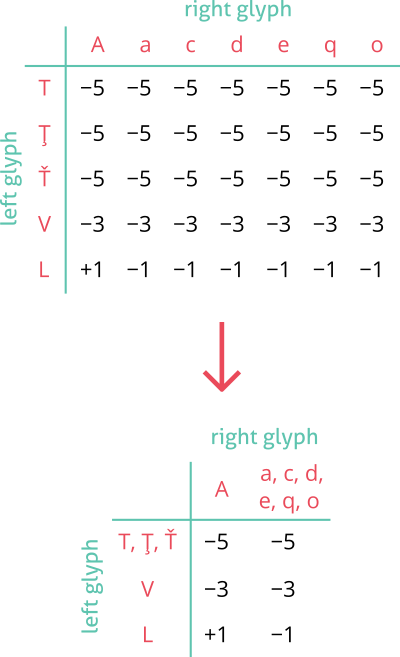 Note how using kerning classes drastically reduces how many numbers you have to determine.

¹ ignoring for one second that some of these are probably not relevant in any existing orthography.

Same for some glyphs followed by comma? It's evident that n. generally is okay without kerning, while r., w. or y. need different spacing. The same for a hyphen between o-o and n-n: If the spacing is the same, it looks okay between the two o, but not between the two n. Which is the most economical way to handle these situations?

For apostrophe in my font has generally a too large space on the right, which is the way to apply the kerning to all glyphs that follow the apostroph itself? Is there a wildcard like * in Bash?

If you want wildcard kerning, you should adjust the bearing instead (select a glyph and then use Set LBearing or SetRBearing from the Metrics menu). In your specific example, reduce the right bearing of the apostrophe until you feel that you do not need to kern with most other glyphs. Then use kerning to improve the spacing with the remaining glyphs.

You may also want to read this answer of mine on other techniques to speed up kerning.

19
What are some common kerning pairs?
2
The logic of kerning subtables

11
Kerning on the fly
7
Are there any benefits to using kerning pairs over kerning classes?
28
My Xylophone is off key; Understanding this kerning
0
Kerning Problems in Illustrator. Other Letter Pairs Affected
2
Can't get my cursive font to connect fluidly (FontForge)
1
How to export font with "Kern Tables" and not "GPOS Tables" using fontforge?
0
Correct Kerning for 0 and 6 in Neutra Modern