How to simulate a better lens blur, i.e. in linear space, with Gimp?

Human perception of intensity is proportional to the logarithm of the physical intensity. When light from an image enters our eyes, we do not perceive the changes in brightness proportionally, but rather proportionally to their logarithm. However, the real physical process of dispersion of light by a lens does not care about how our eyes and brain work. Which means that computer algorithms trying to simulate the effect of blurring a sharp contour should operate after translating first the intensity values to linear space. However, it seems they don't, and that is the origin of the fake dark stripe that appears after doing, e.g., a "photo blur" with Gimp on an image like this one:

This effect is explained by this youtuber here. And, while this usually goes unnoticed unless you are blurring a picture of the flag of Portugal, I wonder how to do a less unrealistic lens blur using Gimp. The stress is on the words "less unrealistic" because the subject seems to be quite complex, but at least a quadratic average of the RGB values seems to give better results in the examples shown on the YouTube video referenced above.

I am using GIMP 2.8.18 which is somewhat outdated.

AFAIK there is no "photo blur" in Gimp itself (there is a "Focus blur" plugin).

In Gimp 2.10 the Gaussian blur (and other blurs: motion, rotation, zoom) works in Linear space (even if the image itself is in "gamma" mode): 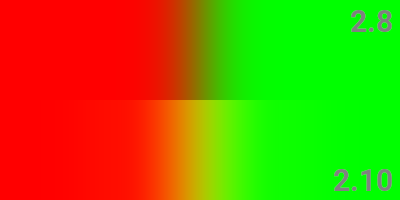 Even in editors that do not have color correct filter facilities its possible to do the following.

Not the answer you're looking for? Browse other questions tagged gimp blur or ask your own question.

1
How to make moving blur effect on Gimp
1
How can I recreate the shadows and blur effect using Gimp?
3
How can I create the illusion of movement with GIMP?
9
In GIMP, how do I get the smudge/blur tools to work properly?
0
GIMP - Stroking with blur effect
1
How to export an svg icon in adobe illustrator with gaussian blur?
0
Gimp - better resolution with less pixelized edge
1
How to use a linear workflow in GIMP?
1
How to make multiple random motion blur effect in GIMP?
0
How to fill non linear selection with some smoothness