I'm a freelance designer and I've got a client that needs a product manual. The manual will include many technical drawings of a very precise nature at various angles. The engineering team has cad drawings of this product and various parts and things. I would like to know if there is a workflow that would allow me to take these cad drawings, position them in the many various angles needed for display and then, somehow, bring them over into illustrator as a line drawing. I'd like to avoid, or vastly minimize, having to pen tool trace each and every image.

I managed to find a post here discussing a method but the technical jargon for CAD is well over my head. I've obtained a free copy of AutoCAD and man alive am I out of my depth with trying to use it.

Any suggestions are welcomed, or if you could parse that linked post and explain it laymans terms that would be greatly appreciated. Thanks in advance for any suggestions or help

I think the basic skill you must have is the ability to open files in AutoCAD. zoom, pan, rotate, switch on/off annotations and other details until you have onscreen the wanted scene. Then save or export the scene as PDF. It should be openable in Illustrator, even editable, if it has only line drawings. If you are lucky, the drawings already have many of the needed scenes as viewports.

I unfortunately haven't AutoCAD due its premium price and because I have no need to have just it, but here's a trivial example from other CAD program.

This is a simple solid piece shown as it was just after drawing it: 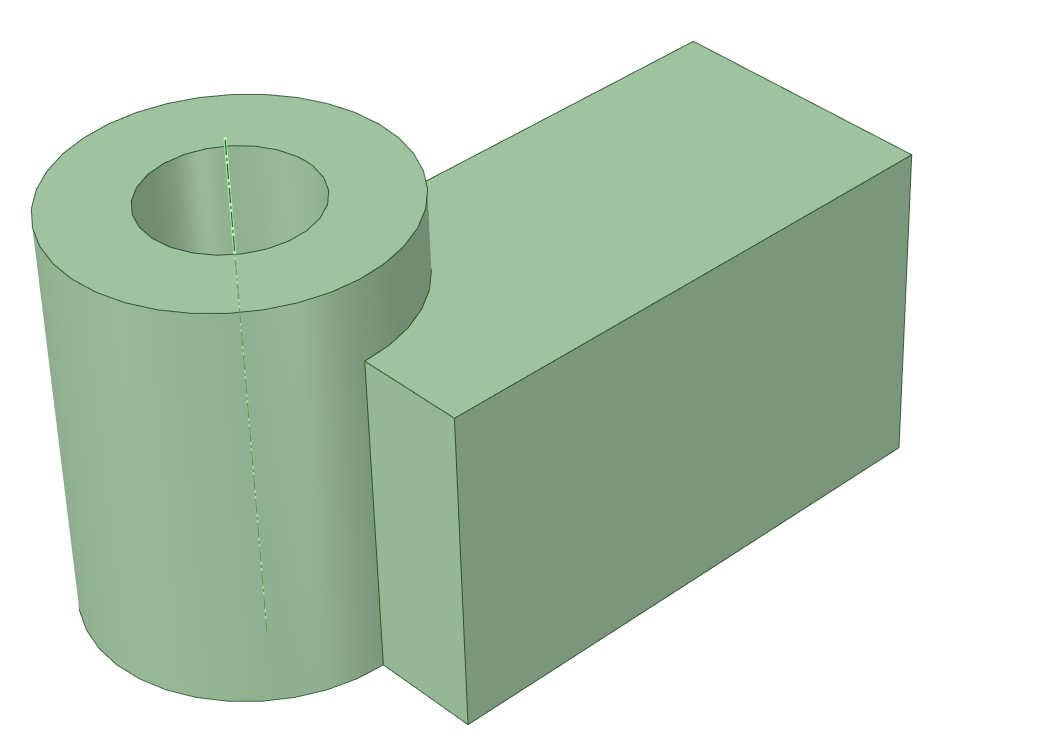 It has quite nice rendering, but its resolution is enough only for watching it onscreen. 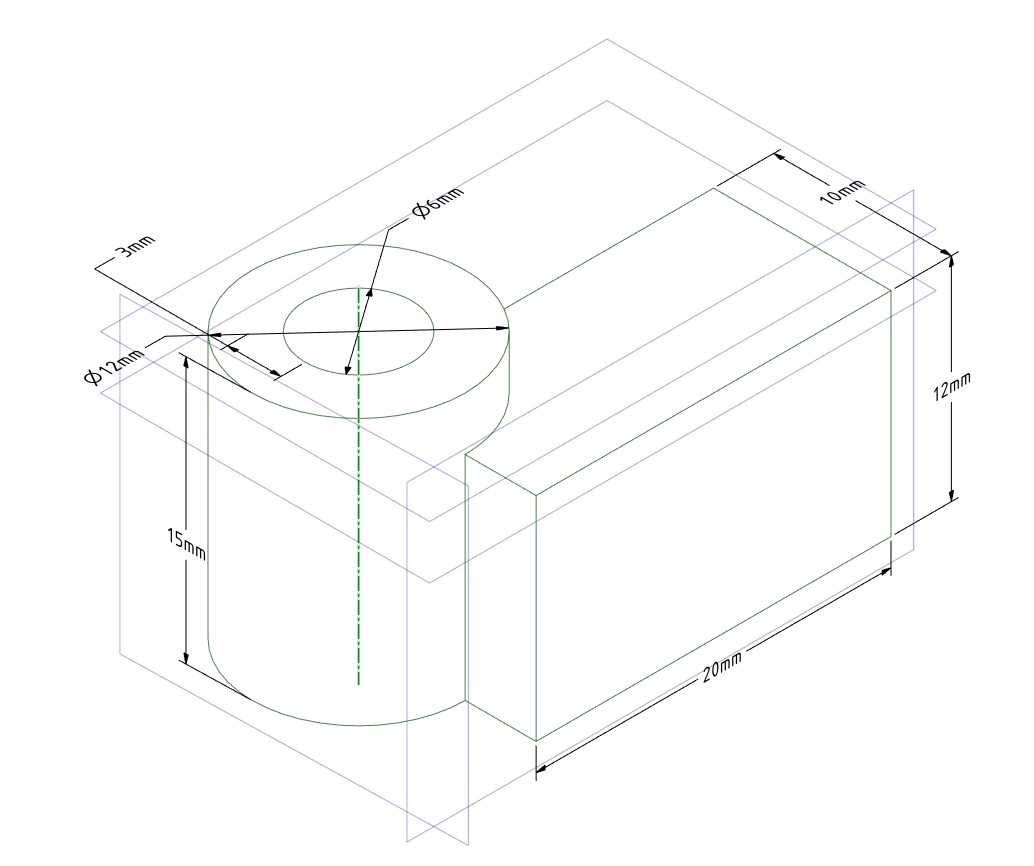 There's plenty of possible annotations which are needed in manufacturing. My annotations are only dimensions. If you need dimensions, insert them in AutoCAD because there surely exist proper semiautomatic dimensioning tools for different geometric forms. Drawing them manually is very error prone. Symbolic drawings such as circuit diagrams are so full of annotations that managing them outside CAD is a nightmare.

My text plane outlines are display-only, they do not mess the export. You also probably must make invisible some data which is useless in illustrations.

The scene has been saved as PDF and opened in Illustrator. It needed only one tweak: The stroke of the main shape hasnt good weight nor color for illustration. They were changed easily. One line was selected and the the rest with Select > Same > Stroke color. The result is the left half in the next screenshot:

The right half is a copy with new texts and color. The annotations from CAD are deleted and two new texts were written.

Simple coloring like this is easy in Illustrator. Unfortunately the lines are not the outlines of the filled areas, they are separate. Illustrator's Shape Builder makes easily the needed new shapes. You fill the areas like with paint bucket. You may need to ungroup, delete some unwanted remnants and select in the tool options gap detection ON, because in PDF there can be invisible, but bigger than zero wide gaps at corners.

ADD: It's possible that you have already a prepared AutoCAD drawing which is perfect for your purposes except Illustrator didn't open it when you tried opening a DWG or DXF. In this case it pays off to try the following trick:

@user287001 great post but I'm having difficulty replicating your demonstration.

For example: Following the guide I stumbled upon here: https://www.youtube.com/watch?v=uO_yIqh5Cms

I have a random .obj of a car I've downloaded for test purposes loaded into Rhinoceros 6. I'v set the perspective window to "Pen" (which, ironically, is precisely what I want the outcome of all this headache to resemble) 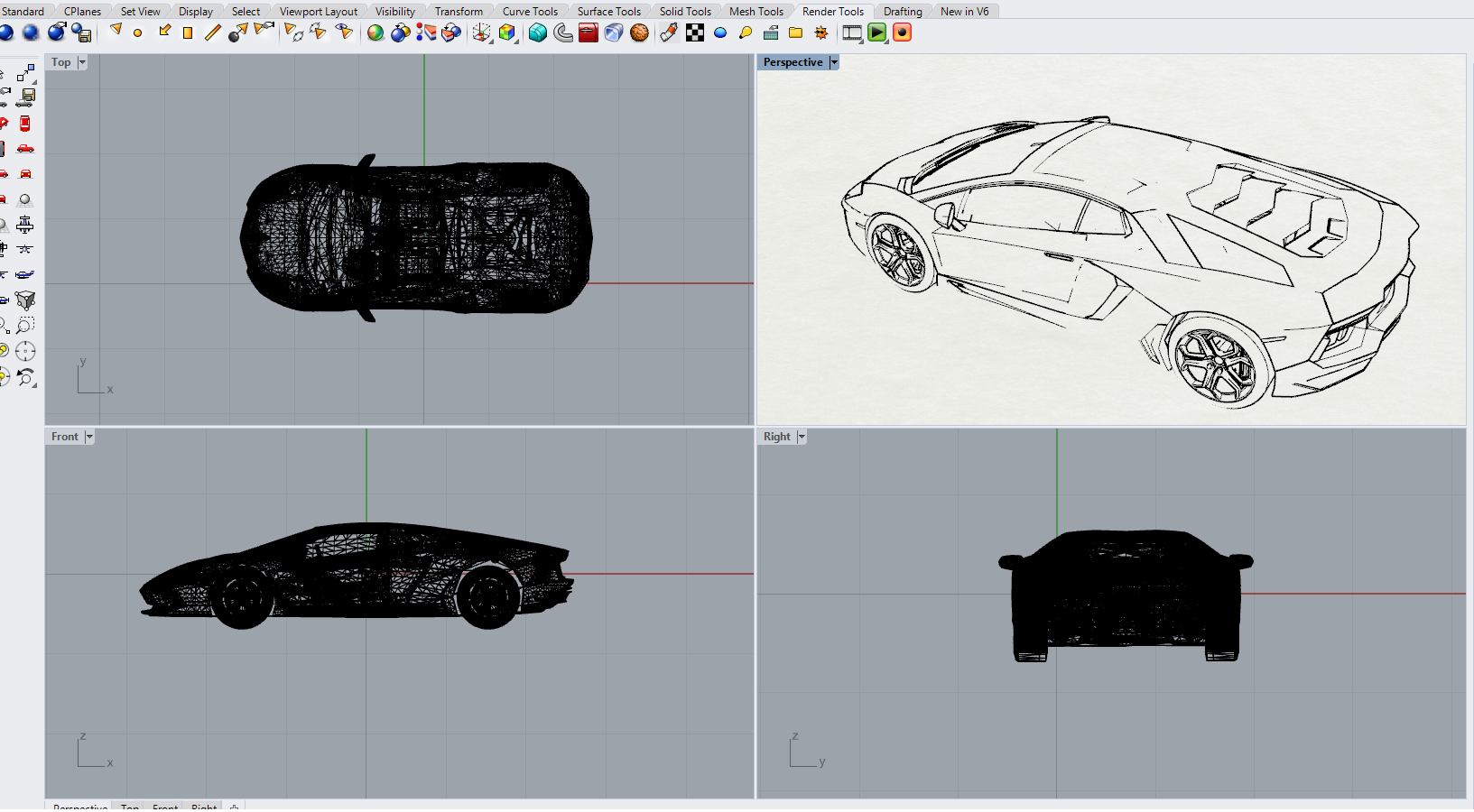 I use the "Make2d" command and in the option box that appears I change the view to "Perspective" and have no other options checked aside from "Group output". As I understand it, this should flatten the perspective into a 2d plane for export as a .ai. Having done so, I open in Illustrator and resize to the artboard.

As you can see in the image below, the wire frame is present in the tires and windows. 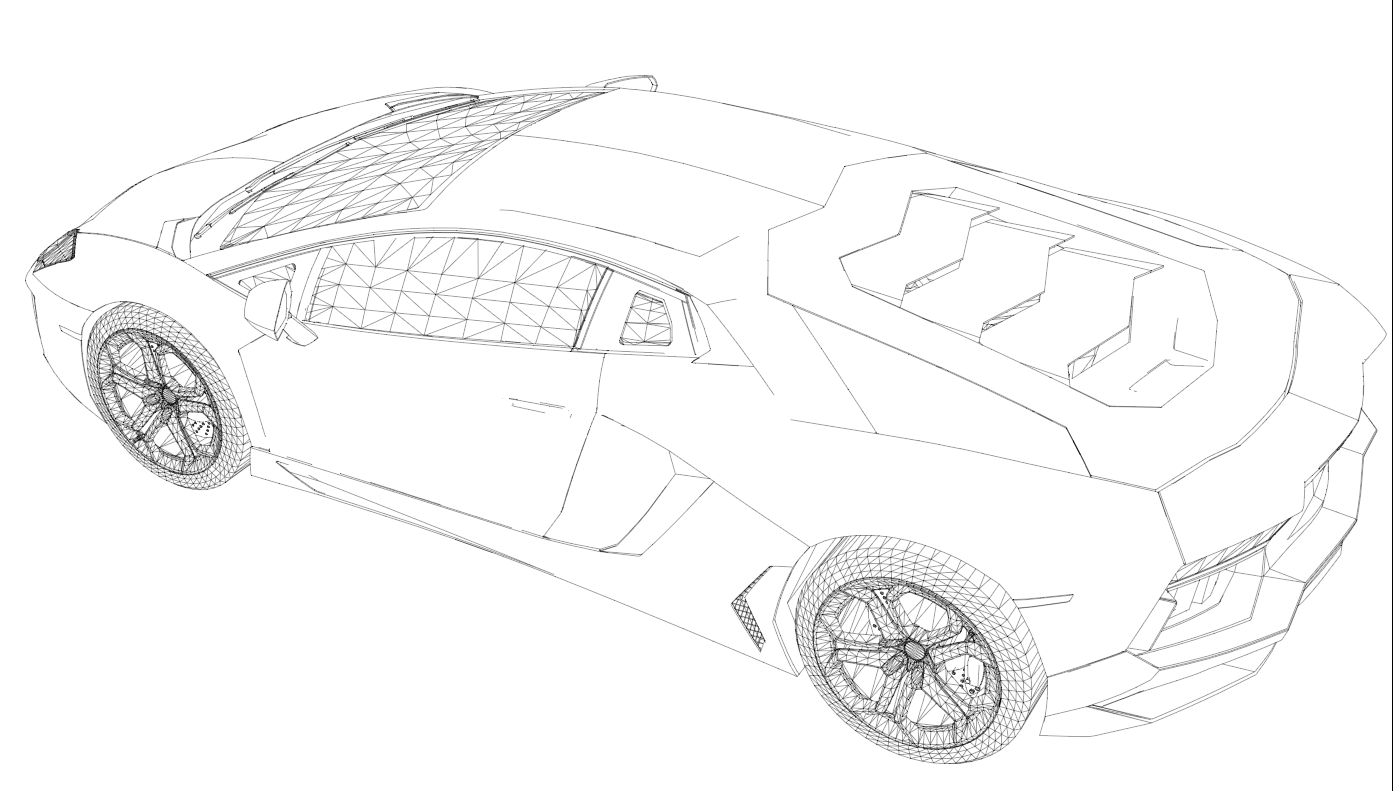 If I select any lines I find there's an ungodly number of excess paths above and below the main outlines and the amount of time needed to clean up each and every path would be excessive. Live paint and shape builder tools won't work either because these paths are not connected to form shapes and the tools won't recognize them and allow filling so I'd have to manually connect them with the pen tool too.

After that I tried to get more involved by using Maya 2018's vector render engine that allows exporting as AI but that was even worse since it exports as a see-through wire frame and I only need to see one "side" of the object rather than see "through" it to the splines on the opposite side.

Clearly you're able to do it so what is your workflow and what programs are you using?

If you want to duplicate what you see in your viewport in Rhino, you can use the "-ViewCaptureToClipboard" command. I believe by default the Width and the Height matches the size of your active viewport. Make sure to make the "Scale" be something bigger for a higher resolution. Make sure to add the hyphen "-" in front of the command to activate the options. (IIRC in Rhino 6, if you don't add the hyphen, a window should pop up that asks for all these settings.) Once this command goes through, you can paste the image of the viewport in any software.

Also, I think the "Print" from Rhino should do something similar. You can print a file as a raster PDF file from Rhino.

3
From a CAD model to an Illustration drawing. How to?