In InDesign, is it possible to create Math-like Markup by mixing line and block elements?

I am making a song-book, and many songs have repeating pairs of lines. I want to group these lines and mark how often they should be repeated on the right hand side of the lines. Here's a crude example of what I want to achieve (this looks quite blunt, but it illustrates the basic idea):

I'm using InDesign CS5, but I cannot find how to do this in a structured way (repeatable and consistent, not by manually positioning images or so). The accolade may also be replaced with a thin line if that makes it more feasible.

My idea was to put two block elements next to each other, one containing the lines to-be-repeated, and the other on the right containing the line and vertically centered line of text (either nested in the left box, floating right, or outside, but maintaining the height of the first). All must stay consistent with the rest of the lines of the song, so no changes in overall line distance or indentation should result out of this.

I'm planning to write a script that will generate the markup and put it on the clipboard so it can be pasted into InDesign.

If InDesign is not capable of such, what alternative would you recommend? I am considering LaTeX, but that would be quite a deviation from our normal workflow and will likely get some resistance from the rest of the team, as well as being a new learning project for myself. 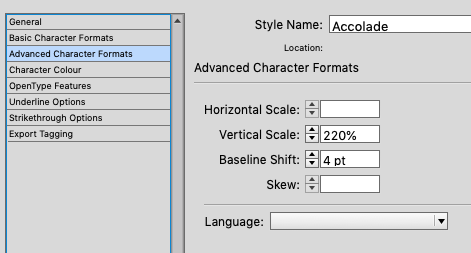 Inside the Song Paragraph Style set a Grep Style for the accolade \} and all the characters behind (?<=\}).+ 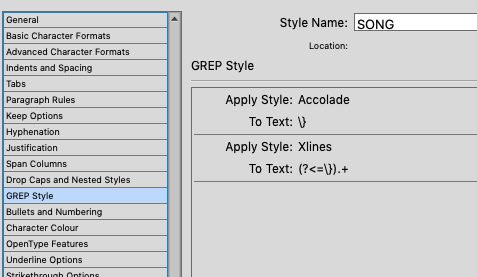 After the second line type one or two tabs and }2x.

Not the answer you're looking for? Browse other questions tagged adobe-indesign typesetting or ask your own question.

0
Indesign: Paragraph styles and line aka rules
6
In InDesign is it possible to find and change uppercase to lowercase?
17
Good strategies for typesetting bilingual books
3
Inline Tables in InDesign
0
Is it possible to create half page masters in InDesign?
0
Adobe InDesign/Typesetting: No kerning possible for first letter in indented line?
2
InDesign: manual line break and justified text
1
Creating line breaks and spacing between heading, subtitle and body copy InDesign CS6