What was there before ICC profiles?

It's a general question of desktop publishing.

I sometimes wonder what notions where taking place where we now have ICC profiles (and there PCSs). Which are computer notions, materialized by files (and matrix spaces).

But before the 70's, for describing or applying colour conversions, colour to black, Pantones, photographic exposure and so on (all what can be done through ICCs)… what was there?

Before the 80s there was just one simple and unique method called trial and error :-)

Knowing that the print originals were made manually, drawing areas where the graphics were, leaving black windows to place the photos, making blue marks for hidden estructural lines and red for the visible ones, and pasting the sheets or strips of texts brought from the photocomposition, much of the work was aimed at a blind ending.

So, once ready and sent to the press, there were few options for future adjustments.

Proofs created by the printer for approval by the publisher/designer before going to press. Wikipedia

Usually called as the comercial name of their fabricants, like MatchPrint or Cromalin. A proof that uses overlays to show the different colors of the artwork being proofed. Wikipedia

A photographic proof for checking layout and imposition accuracy before plates are made. Blue-line proofs give a 100% accurate idea of placement, but are not very useful for assessing tone or contrast. Blue-Lines are pretty much obsolete now. colorprintingforum.com

How far do you want to go back? I can not do a detailed explanation, because I am not a historian, but let's play a bit with the idea.

In the early days of digital images, you did not care about color accuracy.

Some years before you just had 16 colors on a VGA monitor, and just 4 before that. So you care too little about a color profile.

Here is a rough simulation of how "Test Drive" Game looked.

The original colors of this came was Magenta, Cian, White, and Black. So changing them to have a Ferrari red was a real accomplishment. (These images have actually more colors than the original version, it is just to get the idea.)

And how you could switch the palette.

The first one that comes to my mind, and it is still in use is a color bar.

Of course, they are now produced digitally, but they are to control the printing process analogically, where the operator sees the bars and adjust manually the amount of CMYK inks.

which gave you information about how much ink you were pouring into the print, and see how much gain you had. That is on the press.

Going further back on the pre-press process, when you "screened" a photo, for example, a black and white image you had some charts to calculate what was the current black zone of the image, the white zone and based on that data, calculate the exposure time of the film. 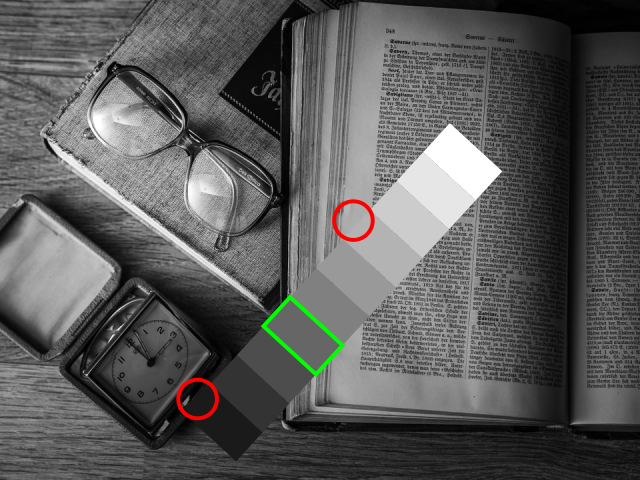 Then we see on the specifications of the screening film manufacturer which is the recommended time for exposing that image.

Something similar was for the CMYK color separations, where you filtered the image and consulted the manufacturer's charts to see the correct exposure time of each plate.

At the end, it was very dependant on the operator's skills.

We can track the history of printing process seeing examples of those decades. Let's use movie posters as a reference.

On the 1960s posters we can see that 4 process printing was not that popular. Combinations of black and white with flat color zones are common, so the color depended on what we now call spot color, or the direct color of the ink. Sometimes an ink is used just to "tint" the image, not to have an accurate representation.

It is on those years when companies like Pantone tries to have some forms of standardization of colors.

And stealing Danielillo's answer about color proofs, there were several methods, to see a last preview of the color.

They were created using the real negatives before putting them into a press, the most popular were ColorMatch and Match Print, that used some dust pigments to simulate the inks. You also had roll tests, where you actually printed some pieces before a big project.

20
What are Color Profiles?
33
RGB and CMYK: Why both?
15
What should I do regarding color profile when designing for the web?
11
Is there anything that can read, import or convert CMYK SVG?
1
RGB to CMYK pdf using various ICC profiles: should I see the differences? [Inkscape + Ghostscript]
0
CMYK profiles issue
4
What is the effect of "Output Intent Profile Name", when exporting PDF from InDesign?
1
Do not attach ICC profiles to placed images
1
Version 4 ICC Profiles were converted to version 2 ICC Profiles during PDF Export error Indesign