Restore opacity to portions of a layer in Photoshop CS4 [duplicate]

A layer has Opacity 100%. However, using a soft erase brush to feather the edges of an item, I've accidentally made too much of the layer partially transparent.

My recollection is that there'd be a layer mask that is less than full value, but "Add Layer Mask" is showing a new, fully-white mask.

When I right click on the thumbnail on the Layers palette, the "Add/Subtract/Intersect Transparency Mask" options are grayed out.

If the layer was the background, it's not fixable because the colors are replaced. Also other layers can be non-fixable, if the opacity is excatly zero. In that case Photoshop wipes the RGB information off. But partially transparent layer areas have all colors intact. Make several copies of that layer and merge them. The opacity, where it's not exact zero, rebuilds itself as you add more copies.

Newer Photoshops have Layer > Layer Mask > Mask from Transparency. It's at least in CS5. If that happens to be in your version, use it and edit the layer mask. I have never used CS4, but as far as I know that option doesn't exist in CS4

There's also the channel editing route (=change alpha back to 255), but that's probably easier in GIMP, because that channel (as commented) isn't shown in the normal Photoshop CS4 user interface. Some underhood knowledge, programming skills or a third party add-on is needed. At least The PluginSite has had in their Photo Freebie collection Transparency Remover Plugin. The PluginSite is still in business, but I am not sure do they keep available legacy stuff.

I took a simple PSD from Photoshop to GIMP. It has 2 layers, the top layer is partially erased and the bottom layer is seen through. The opacity isn't exact zero anywhere. If it was zero, this wouldn't work.

The top layer can be fixed to fully opaque by applying levels to the alpha channel of the top layer. All alpha values are lifted to 255: 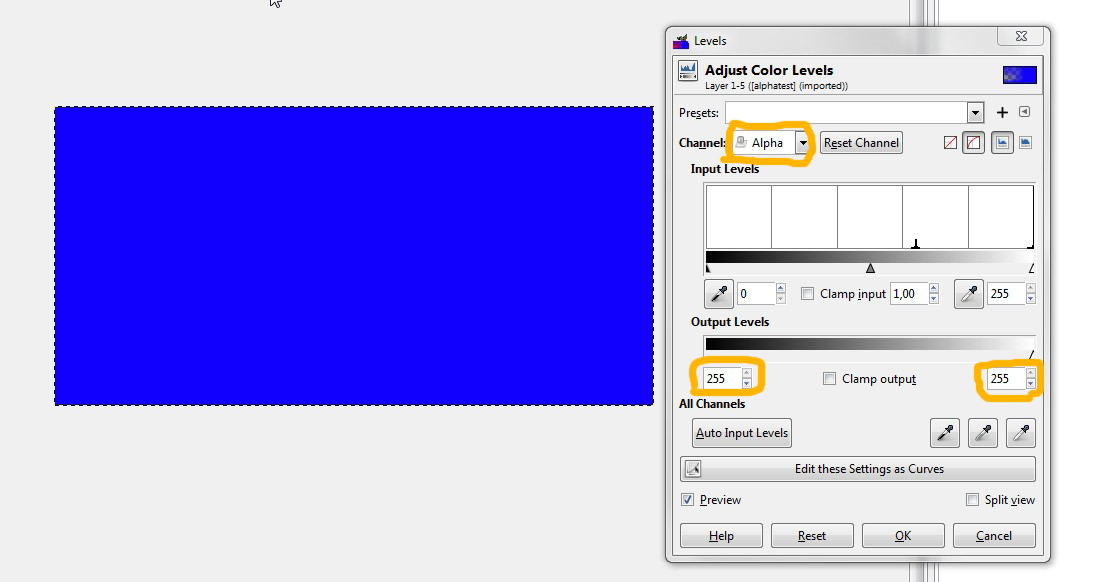 The transparency vanishes totally. I suggest you make the next edge fading attempt with a layer mask. It's easily editable in Photoshop.

A little more advanced way in GIMP is to paint white to the alpha channel and see how the opacity returns. Only select the problem layer in the Layers panel and the alpha channel in the Channels panel and paint. I think this method fits well to tuning your manually drawn edge fadings.

You can make a PSD which contains only the problematic layer and fix it in GIMP. Remember, that GIMP knows nothing about advanced PSD features such as layer styles or adjustment layers.

Cycling an image through 2 programs has a trap: Different color settings can cause automatic unwanted color changes. It's good to be sure that both use the same mode and profile. As well you can switch all color management actions off temporarily.

Not the answer you're looking for? Browse other questions tagged adobe-photoshop transparency cs4 or ask your own question.

1
Is there an “inverse eraser” tool on Photoshop?

5
Illustrator CS4: Default opacity of new objects
5
How to determine the color and opacity using the color picker tool?
12
How do I tell Photoshop to preserve the RGB color of fully-transparent pixels when exporting as PNG?
5
Photoshop: why won't layer styles render correctly?
2
Creating a Selection in Photoshop with no Feathering or Anti-aliasing
0
Automate Adding Individual Reveal All Mask to Many Layers in Photoshop?
1
Is there an “inverse eraser” tool on Photoshop?
2
Is it possible to subtract two layers to calculate transparency?
0
How do you replace pixel color on all channels including alpha in GIMP?