I have a Wacom Intuos 3 more than a decade old. The pen nib has been worn down to nothing but still works. I dont think I can get it out anymore since it is basically flat. The eraser tool works great and it has pressure settings of its own.
I was wondering if there is a way to hack the pen such that the eraser would work as a brush for painting in Photoshop?
Right now if I flip the pen it just switches to the eraser tool by default. Is there a way to stop this from happening?

You can replace nibs.. I'm sure you could pull the old one out if you tried enough.

You can also just replace the Stylus. I believe the Intuos 3, 4, 5, and Pro are all using similar radio frequencies. I know I've swapped and mingled styluses between tablet versions several times. You can call Wacom to verify though. They are always happy to help with questions.

As far as I'm aware, the eraser end is always seen as the eraser end. You can change the function of it to something other than an eraser, such as a key stroke, or click.... 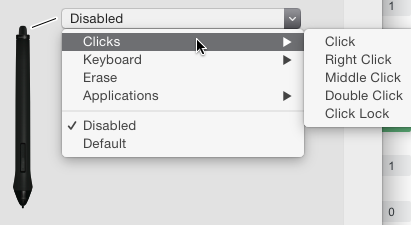 The screen shot is from the Mac preferences for my Intuos 5 (the Art Pen specifically). As far as I remember, it's had similar options for the eraser end since the Intuos 1 was released. I've been a Wacom user since the first-gen Intuos.

Not the answer you're looking for? Browse other questions tagged adobe-photoshop wacom or ask your own question.