Match the perceived luminance between green and red images

i have a strange question. I have two images one with only the green RGB channel and the other with only the red channel. These two images are matched (before applying the filters) for luminance, contrast and spatial frequency (with a Matlab toolbox). However i realized that green and red have different perceived luminance. Is there any method to match, as much as possible, this aspect?

Actually you have got an exact answer in a comment, but if you have no idea what is CIE's Lab color system and what makes it worth to use, you have a reason to learn something of color systems. Shortly: Lab is a quite succesful attempt to present the perceived (=subjective) luminosity and the color independently. By changing color components a and b you do not change the perceived luminosity. By changing the luminosity component L you do not change the apparent hue nor colorfulness (=chroma). I wrote colorfulness, not saturation, which has some usage only in the RGB system (In Photoshop with color mode = Lab there's still adjustment for saturation, but it affects chroma)

In the beginning you can do something coarser and check, if it's enough. In simplified color theory one can calculate the following subjective relative luminosity from the RGB numbers:

Color televisions use this. You can thus darken your green image to the same luminosity scale than your red image by multiplying the G numbers with 0,3/0,59 (=0,508).

As well you can divide the R numbers with the same factor, but that can cause clipping.

This is really very coarse when compared how much effort is put to the development of the Lab system. But check, if it works for you.

An opinion: The formula where I took that 0,508 from, is obviously estimated from television screen tube phosphor materials, relative linearized sensitivity of the eye and finally the nonlinearity of the screen behaviour has been linearized somehow. It seems to give too dark result if one uses curves or levels in Photoshop. If I adjust visually G-component of a white to black gradient as dark as the R component is, when both are watched in parallel as green and red, the right multiplication factor for G is 0,57, not 0,508.

I have a calibrated display but the accuracy of the calibration is unknown. I haven't made measurements, only made the line in Image > Adjustments > Curves more or less tilted until the result seems right. So, this isn't more than my opinion.

A screenshot (which proves nothing due several color conversions between us): 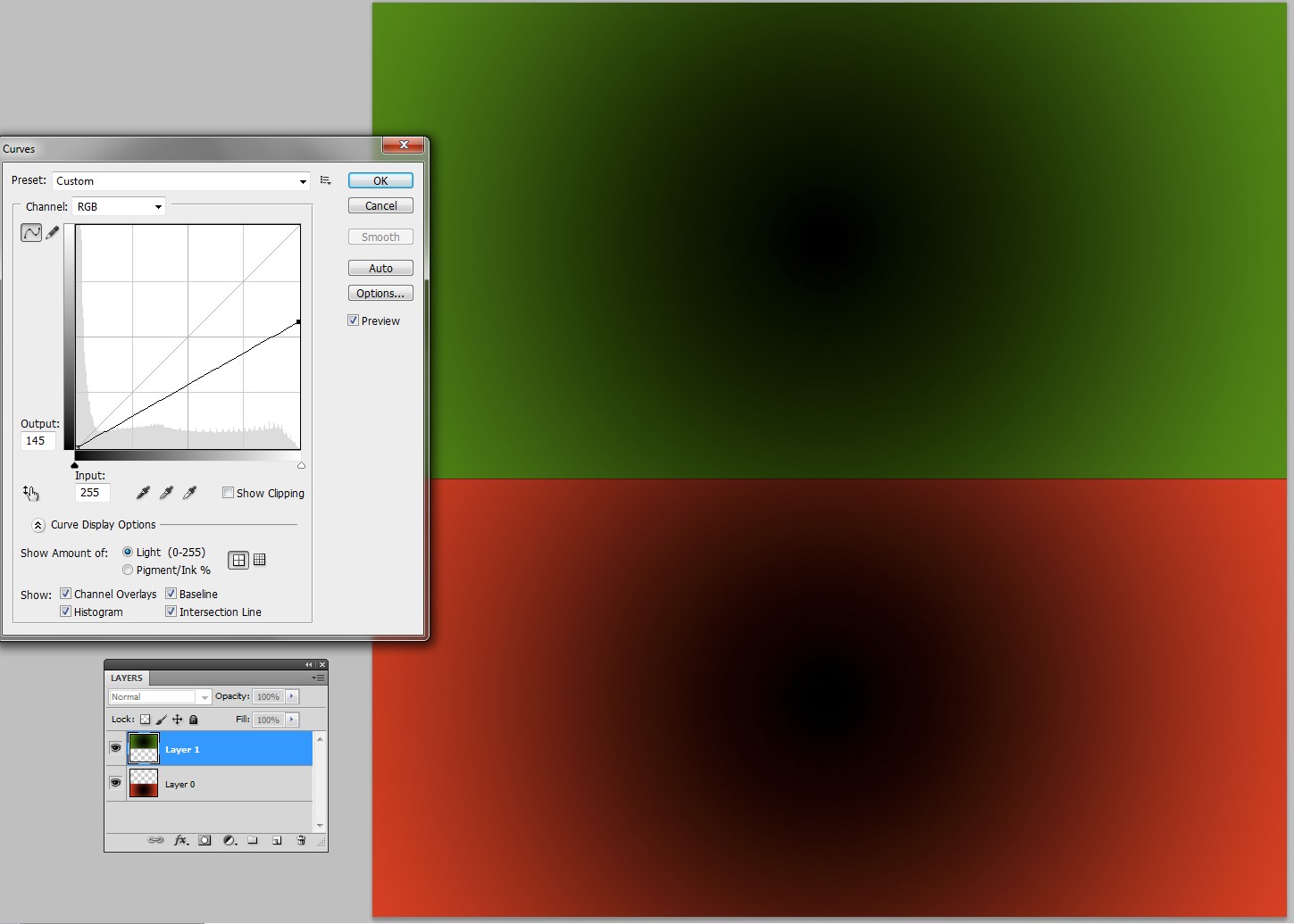 2
Systemetic way to choose a good red & green color for dark grey background
12
How reliable are the colour blindness previews in Illustrator and Photoshop?
6
How do two different colors match in strength?
2
Separating two very close colors in GIMP (2.9)
1
Why aren't there printers that use red-green-blue ink cartridges?
1
How to create harmonious color palette?
0
How can I map a grey scale image to a specific color channel gimp?