I would like to know how to set it so that when I start a new shape with the pen tool in Illustrator it creates a new layer every time. I can't seem to find the setting for it, can anyone be of assistance?

There's no such setting. Illustrator simply does not function that way. You may be accustomed to Photoshop creating new layers for everything. Those are necessary in Photoshop. They aren't needed in Illustrator.

The only time Illustrator creates a new Layer is when the user tells it to. In other words, if you want a new layer you have to manually create it.

Paths do create new objects though. The Layers Panel in Illustrator is really a "Layers and Objects" panel. Each layer contains objects. If you don't see the objects you can adjust the Layer Panel Settings via the Panel Option item in the Layer Panel flyout menu: 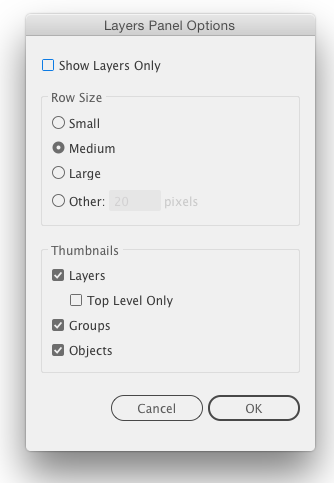 As long as that top checkbox is not ticked, your layers panel will show objects. 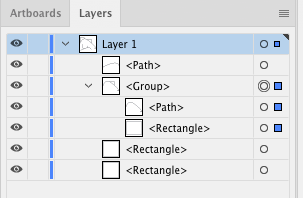 You can create a new layer manually and then click-drag objects from one layer to another: 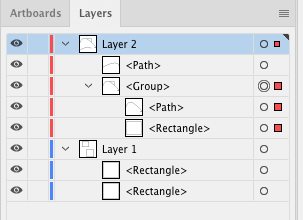 And you can always create a new layer, highlight it in the Layers Panel and then any new objects will be placed on that layer.

But Illustrator, by default, simply won't create layers for you ever. It's possible to create the most complex, intricate, piece of artwork using Illustrator and have it all be on one single layer.

Illustrator layers are there as a tool for the user to make object management and organization easier. Illustrator layers, unlike Photoshop, aren't a technical necessity to maintain the appearance of whatever is being created.

In Photoshop, without a separate and independent type layer, the type would not be editable after it's created. In Illustrator, since type is an "object", it's always editable until you tell it not to be. Things like that.

All that being posted...

Photoshop's default shortcut for a new layer without dialog is Command/Ctrl+Option/Alt+Shift+N.

Illustrator's shortcut for the same function is Command/Ctrl+L.

How annoying it is that they use different shortcuts? I merely edit AI's shortcut to match Photoshop's Shortcut.

After that both Photoshop and Illustrator will use the same shortcut for "New Layer without a dialog".

You could easily edit Photoshops shortcut to match Illustrators. However in Photoshop Command/Ctrl+L brings up the Levels dialog, which I find way more useful. Since Illustrator has no default function using Command/Ctrl+Option/Alt+Shift+N I just find it best to alter AI's shortcut. And after years of use..... it's become like a muscle tick for me to use that shortcut for a new layer anyway.

Not the answer you're looking for? Browse other questions tagged adobe-illustrator illustration pen-tool or ask your own question.

0
Disable Photoshop Elements Brush Selection with Pen and Tablet
2
Is there any way to auto close the bezier tools when using the Pen tool for every new angle?
2
In Illustrator, how do you branch off from an existing line with the pen tool?
1
How do I create curved edges in Illustrator using the Pen tool?
4
Pen stroke width keeps changing
0
pen tool makes a new layer every time i create a new shape in Photoshop cc 2017
1
(Adobe Illustrator) Pen Tool fills in lines
0
Joining / Connecting Lines from the Pen Tool (Illustrator)